Milwaukee’s culinary and nightlife identities are enjoying staggering growth and inarguable evolution. Each year, a flurry of great new restaurants, enjoyable new bars, and downright wonderful new food experiments keep nudging the city—often and unfairly tabbed as a “cheese, brat, and beer” town—forward. This year was no different, as a wave of new Epicurean establishments opened at an impressive clip, once-unsung edibles experienced a rise in popularity, and chefs were prone to take bigger risks in years past. Of course, renowned (or, in some cases, infamous) places also closed and specific food trends were also driven into the Earth’s core. And who among us can forget the blah, blah, blah At Random and Bryant’s something something?

Now in the “waiting for the bill” stage of the year, Milwaukee Record contributor Rachel Seis and co-founder/editor Tyler Maas look back on the best, worst, and weirdest things in the realm of Milwaukee dining and drinking in 2015.

The Year In Closings

Butch’s Old Casino Steak House: Butch’s was a Milwaukee institution, but you know that. A true supper club with monster prime ribs, glinting mirrored walls, and cherry-garnished cocktails, it was a time machine that made every dining experience seem like a special occasion. Sadly, the restaurant closed last winter after more than 30 years in business, leaving a relish-tray size hole in our hearts. [Rachel Seis]

Down & Over Pub: The writing had been on the wall since late 2013, but right when you’d think Down & Over Pub couldn’t possibly still be open any longer, there would be a rummage sale, a skate video premiere party or a private event to signal minimal signs of life for the underutilized Bay View bar. In late summer of this year, the death blow was finally delivered. A “dog-friendly, upscale micro-hotel” is reportedly planned for the space at some point in 2016. We’ll never forget the few months when a daycare moved above the bar/venue. [Tyler Maas] 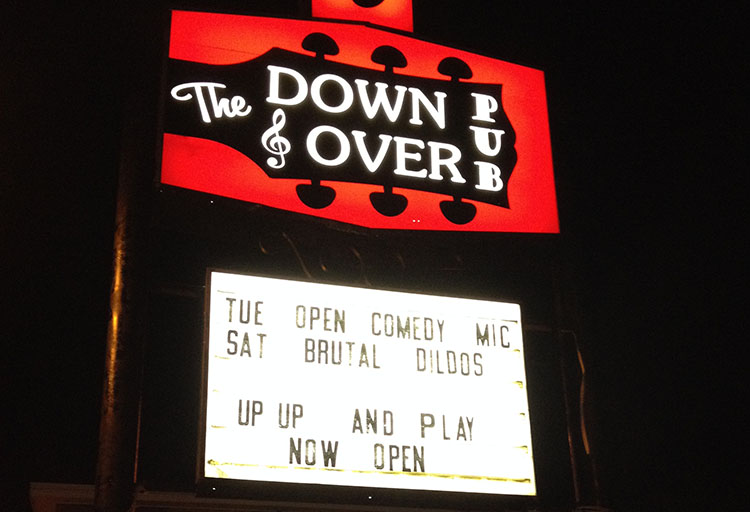 Lucky Joe’s Tiki: With tons of uppity small plate restaurants, craft distilleries, and brunch bistros flocking to the previously-gritty neighborhoods of Walker’s Point and the Fifth Ward lately, Lucky Joe’s short occupation was kind of the best of both worlds. The meticulously-made specialty cocktails were (more often than not) also irresponsibly boozy. The decor and tacky exterior paint job gave the tiki bar and island feel an industrial and definitively land-locked part of the city. Sadly, the bar abruptly closed this fall—surely a casualty of ownership wanting to focus time, energy, and resources on the new Lucky Joe’s Alchemy & Eatery (more on that later). [TM]

Strada Pizza: With no shortage of more established and, frankly, better pizza purveyors in and around Bay View, Strada‘s lukewarm ‘za and stale by-the-slice business model were in and out of business within the span of a calendar year. The recent closing gave way to…um, another by-the-slice pizza place. [TM]

Uncanny Soup: It was a risky move for Uncanny Soup Co. to parlay its success and longevity in Cudahy into a location in downtown Milwaukee’s already well-represented soup scene in late 2014. Intense competition combined with warm-weather months (not exactly conducive to soup consumption) quickly intensified the financial heat. A year after opening, the pot boiled over. Uncanny closed shop and its owners returned to Cudahy to open a burger joint, which we’re legitimately excited to try. [TM]

The Year In Ubiquitous Food Trends

Deviled Eggs: This potluck staple has gone from spoiling in the sun on your grandma’s picnic table to popping up on restaurant appetizer plates seemingly overnight. And they’re not your standard yolk-mustard-mayo variety, either. Balzac’s come dolloped with caviar, Rumpus Room tops theirs with bacon and chives, and Vanguard keeps things interesting with a rotating Deviled Egg of the Day. With endless opportunities for customization, these unassuming apps will become even more ubiquitous on menus across Milwaukee in the coming year. [RS]

Pop-Up Dining: Like a college freshman after a night guzzling jungle juice, Milwaukee’s dining scene has been doing a lot of limited-engagement experimenting recently. This year saw tubed-meat purveyor Vanguard masquerading as a Chinese restaurant on Halloween, as well as offering Latin street food, vegan fare, and a bonafide seafood boil as part of its summer Grill Communication series. Gypsy Taco has been delighting cocktail drinkers while taking temporary residence outside Boone & Crockett now and again since summer. And fancy-pants outfit Dinner Lab hosted a slew of super-secret one-night-only dinners throughout the city. Allowing diners to try all-new dishes and local chefs to color a little outside their lines, it’s been a win-win for everyone. [RS]

Ramen: Thanks partially to the killer bowls served to the late-night ravenous at eminently popular Red Light Ramen each weekend, it seems the city’s fully embraced the resurgence of ramen—not as a last-resort option for broke college kids, but for a comforting, ass-kickingly delicious meal in a bowl. Of course Japanese restaurants like Izumi’s and Kanpai have gotten in on the ramen game, but it’s also popping up on menus where you’d least expect—the tonkotsu-style broth dished out at The National cafe will floor you. [RS]

The Year in Openings

Beerline Cafe: Vegetarians and vegans rejoice! Back in late September, Milwaukee’s East Side gained another restaurant/cafe, this time with a subtle twist. Beerline Cafe is a traditional coffee shop that also boasts a respectable breakfast menu, sandwiches and sides, and an overriding focus on sustainability. That focus is applied in a comfortable and cozy environment without being preachy and annoying. Honestly, we didn’t even realize the absence of meat on the menu until we re-examined the menu days later. [TM]

Company Brewing: Doesn’t it feel like Company Brewing has been around forever? After extensive renovations and a brief bout with Wisconsin’s outdated and oh-so stupid “Tied House” laws that shook up the ownership and kitchen staff, Company finally opened in Riverwest this spring and quickly whet appetites with excellent food, solid house-brewed suds, and a few unforgettable local shows. Within the span of a calendar year, Company Brewing went from not existing to being a place some locals can’t imagine living without. [TM] 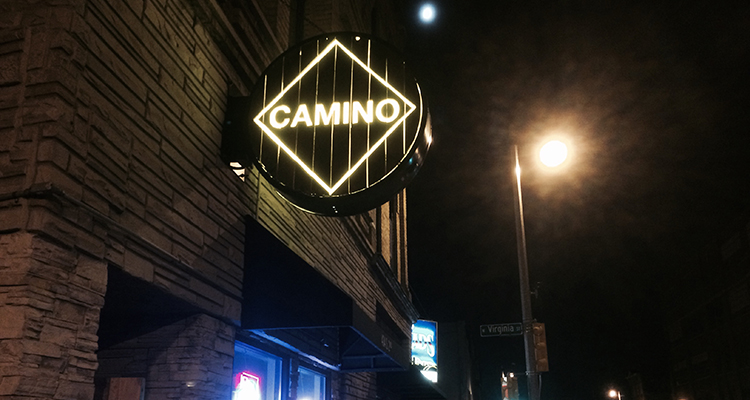 Camino: You could call Camino a beer bar with sandwiches, but you’d be doing a disservice to their inventive spin on pub fare that caters to vegetarians and carnivores alike. The grinders are loaded with brussels sprouts and slathered with walnut butter, the beef sandwiches are brown-sugar seared and piled with beer-soaked mushrooms, and the grilled cheese arrives stuffed with kimchi. And the beer? Choose from 20 on their solid draft list comprising craft beer darlings from across the country. It’s a simple space with a have-another vibe, and exactly the kind of place we hope to see more of in Milwaukee. [RS]

High Dive: Longtime bremen Cafe bartender Jason McBrady took the plunge into ownership this summer by hastily fixing up and opening High Dive in the former site of Impala Lounge and Riverhorse just in time for the Riverwest 24. Cheap beer, free shows, macaroni during Packer games, and a welcoming environment have quickly made the quaint tavern a Riverwest standard. [TM]

Lucky Joe’s Alchemy & Eatery: Like some of Milwaukee’s restaurants and bars, but hate, you know, living in a city? Boy, do we have news for you! Wauwatosa’s co-opting and fervent franchising of seemingly any successful Milwaukee business was in full swing this year. In addition to Red Dot, Camp, 500 Bel-Airs, and a new Pizza Man taking root, the suburb also saw a second bar with the Lucky Joe’s moniker opening. Though the opening of Lucky Joe’s Alchemy & Eatery this summer ultimately spelled the end of the aforementioned Lucky Joe’s Tiki, we’re happy to know there are still great cocktails and Tinder date-suited ambiance only a slightly-annoying drive away. [TM]

Merriment Social: It’s about time someone introduced Milwaukee to dim sum, and even if Merriment Social’s interpretation is highly Americanized and still low on options at this point, we’ve got no beef with anyplace that lets you select pre-dinner snacks from a cart wheeled straight to your table. As for the ever-rotating main plates, they’re well-executed, approachably smart takes on classic dishes you already love. In a space that’s been updated with a pop-art appeal, Merriment Social delivers dressed-down fancy fare with an effortless sense of cool. [RS]

Artisan Cupcakes: When people are paying out the ass to attend cupcake and bourbon soirees in Cathedral Square, it’s abundantly clear that the cupcake is fucking dead and humanity is doomed. [TM]

Doughnuts: Here lies the doughnut, smothered to death by cookie crumbles, maple-bacon frosting, and fruity cereal. Once a staple of office birthday celebrations and the occasional treat from your grandpa, the simple glazed doughnut has morphed into the poster-pastry for diabetes. For the past few years, “gourmet” doughnut shops across the country have been playing God in their confectionary lairs to construct fried-dough monstrosities in the quest to go bigger, better, and more absurd. In Milwaukee, the food trend reached and hurtled over its peak when a Holey Moley doughnut kiosk opened at Miller Park this spring, the Frankensteinian fritters leaving good ol’ peanuts and Cracker Jack it their saccharine wake. Is no place sacred? [RS]

Pho: Pour a little beef broth out for this homey (Vietnamese noodle dish). When restaurants start getting cute with their monikers (namecheck: Pho King), you know their namesake dish may have stamped its one-way ticket to Passe-ville. To this point, there are at least seven Milwaukee-area restaurants with “pho” found somewhere in their name. Can a city this size sustain so many establishments with such a narrow focus? When the brothy bubble bursts, so might they. We’re not saying pho is any less delicious than when we fell in love with it three years ago, we’re just saying maybe it’s time to explore other options. If you ask us, you might as well pho-geddaboudit! [RS]

Gluten-free everything: The percentage of Americans diagnosed with Celiac disease—those who cannot ingest gluten without their intestines exploding all over the place (medically speaking)—is one. One percent of the American public cannot process gluten. And that sucks for them. But for the rest of us? That box of gluten-free triple-chocolate-chunk peanut-butter brownies isn’t doing you any favors. Nor is requesting a special order of flourless churros from the Mexican joint down the street. Cutting gluten from your diet basically just means your tum-tum feels better because you’re naturally eating fewer carbs. Your intestines are not special unicorns of insensitivity. Put down the $12 box of gluten-free rosemary-asiago rice thins. You’re going to make it. [RS]

Bryant’s: In August, rumors swirled regarding the potential closing of Milwaukee’s beloved, historic, and iconic Bryant’s Cocktail Lounge. Without Bryant’s, where would bands film period-piece music videos? Did Shepherd Express need to cancel its plaque order for “Most Kid-Friendly Sports Bar/Music Venue To Be Seen In” and give it to Mozzaluna instead? Milwaukee was thrown into premature egg-white-incorporating highball withdrawals, only to have Bryant’s ownership quickly refute the rumors. We live to spend $14 on a Manhattan another day. [TM]

At Random: In April, Milwaukee Record broke the news (‘SCLUSEY!) that incredibly-overrated Bay View cocktail bar and limping gimmick At Random was listed for sale on a local real estate website. Shortly thereafter, the listing was pulled, meaning free-thinking adults were safe to continue shilling out a small fortune for alcoholic ice cream drinks served by grumpy old women in an impossibly-dark David Lynch movie set. In a sense, nothing changed, but we’ll always have this email to remember that crazy week in the spring of 2015. [TM]