As one of easiest foods to prepare, among the least expensive meals to purchase, and one of the few edibles whose prepackaged store-bought version can be remarkably close in quality to many restaurant renditions, soup is a strange offering upon which to base an entire restaurant. To do so, a restauranteur must really believe his or her take on (and accessorizing of) this American staple is especially delectable to lure potential customers away from the convenience and affordability of slurping some microwaved Progresso or Campbell’s Chunky in the break room. Evidently, more than a few establishments in Downtown Milwaukee believe their soups to be superb enough to send patrons out into the wind-whipped concrete corridors between buildings for some spoonfuls of their specific goodness.

Early last month, Uncanny Soup Co. (612 N. Water St., 414-231-3706)—which had a location in Milwaukee’s historic Gas Light Building before leaving to turn its focus to locations in Cudahy and Kenosha, along with a slight commercial presence in area grocery stores—became the latest soup and sandwich peddler to sink its ladle into Milwaukee’s Downtown. With some regional recognition and a cookbook worth of recipes to its credit, would Uncanny Soup Co.’s success and quality translate to its newest location? Milwaukee Record waited until the coldest day since last winter to warm up in the Soup Co.

The space: While prior tenant Suburpia’s inconsistent hours and our aversion to excessively mayo-slathered pre-made sandwiches didn’t exactly make us regular customers, there was no mistaking the interior similarities between the past occupant (occasionally, when they felt like being open) and the newest soup-slinger on Water Street. The Suburpan-specific wooden wall panels remain. Excluding some minor touch-ups like some inoffensive framed prints befitting of hotel room display, mounted slates with colorful chalk writing, and a light paint job (complete with ample use of an Uncanny wall stencil), the interior hasn’t changed much yet, hence the swift transition between businesses. 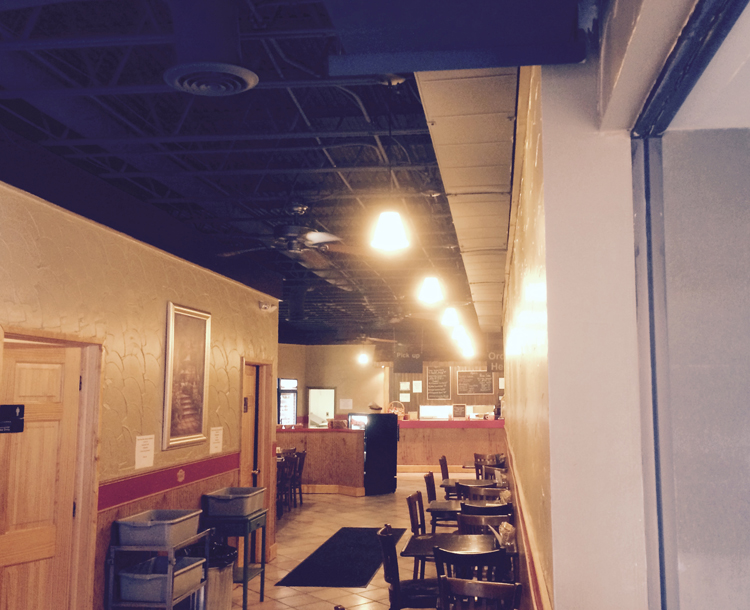 The service: Entering a mite after lunch hour, we were the only customers in the joint upon our 1:30 p.m. arrival time. As a result, we were quickly and warmly greeted by a friendly woman working the counter who asked us our order before we really had a chance to examine the menu. We stepped aside to further look at the wall-mounted chalk board menu as she took the orders of two patrons who had since entered. Little more than a month in the new digs, she already remembered one man’s go-to soup order. After we were up again and made our mind up, she made sure to warn us one item was on the spicy side. We received our entire meal within two minutes of paying.

Milwaukee Record’s food: The allegedly spicy item was Jambalaya, one of five regular soups Uncanny serves every day, along with a daily special that’s usually a less-common option like Chicken Pot Pie Soup (Thursday) and Crawfish And Crab Sweet Red Pepper Asparagus Bisque (Friday) rotated in each weekday. The cup of Jambalaya was one of three components of our order, Combo 1: half a sandwich, a cup of soup, and customer’s choice of either a canned soda or a Frito-Lay brand mini bag of chips ($8). Combos range from $8 to $11. In retrospect, the $9 Combo 3: a whole sandwich, a cup of soup and either a soda or chips is by far the best deal.

We rounded out our retroactively misguided combo with the most standard-sounding selection in Uncanny’s four-sandwich arsenal, the Granny’s Meatball, and washed it down with a Diet Mountain Dew. Expecting something at least in the neighborhood of being worth the warning we’d received, the jambalaya let us down in terms of its lack of spice, as well as its overwhelming saltiness, even for soup. The meaty mixture (sausage, chicken, and ham…with no seafood) was matched with an abundance of diced tomatoes that no doubt (along with the ham) were supplying the salt overload. While still above average on the whole, it was not the caliber of soup we’d expect from a self-proclaimed “Soup Company.” The Baked Potato, sirloin-incorporating Chili, and Chicken Enchilada options seem more likely to showcase the company’s strengths.

While woefully small (WHY DIDN’T WE SPEND $1 MORE FOR AN ENTIRE SANDWICH?!), we enjoyed the meatball bomber much more. We worried the meal’s quick arrival would translate into dry meatballs, but they were actually quite succulent and (unlike our soup) enhanced with a hint of oregano and basil. The fresh and fluffy homemade bread was an unexpected highlight, which we happily used to sop up the small mountain of marinara sauce and melted cheese that collected at the bottom of our basket. The “sweet or hot peppers” touted on the description were absent, but we didn’t notice until we’d dispatched our mini meatball treat. Our Diet Dew was fucking extreme, as we’d anticipated.

The verdict: Of all the soup places in Downtown Milwaukee, Uncanny Soup Co. is definitely one of them. The jambalaya missed the mark, but something tells us there’s a reason the shop has thrived in two other locations before returning Downtown. In the bitter cold of soup season (a.k.a. fall/winter, a.k.a. most of the year in Wisconsin) it should prove to be a refreshing, fast, and relatively inexpensive local addition to the formal, pricy, or chain-riddled Water Street lunch scene that surrounds it.