And that’s a wrap: After 15 days of movies, more movies, and even more movies, the 2014 Milwaukee Film Festival has come to a close. Bookended by an opening-night screening of 1971 and last night’s sendoff from the Milwaukee-made The Surface, MFF2014 once again punched above its weight and proved to be one of the best (or maybe just the best?) regional film festivals in the country. Milwaukee Record threw itself headlong into all the cinematic goodness, and came away with 10 standout moments.

1. A couple of Mekons get their pictures taken outside Pizza Man
British folk/punkers The Mekons have a somewhat confusing legacy, which the film Revenge Of The Mekons does a nice job of clearing up without trying to dig up any dirt or enforce any apparent hidden agendas. Deep down, they seem to be persistent outsiders and all-around nice people, a reputation which the band’s two most prominent members (Chicago residents Jon Langford and Sally Timms) upheld following a brief Q&A at Downer Theater. The two were amiably down to earth, happily posing for photos with attendees and film fest staff. Maybe the secret to longevity in the business of rock and roll really is genuinely liking the people you work with? [Cal Roach]

2. Craig Stingley’s poignant appearance at The Milwaukee Show I
The festival’s first Monday was an especially strong display of the strength and the versatility of Milwaukee’s filmmaking community. Yet the impressive output of shorts about rural Wisconsin amusement parks, the charismatic regulars of Angelo’s piano lounge, humorous adventures of fictional rappers, and, uh, gliders (?) was dwarfed by the powerful VICE News piece The Death Of Corey Stingley. While the doc came out in April, it’s safe to say some of the 1,000-plus in attendance weren’t aware of—or just weren’t willing to watch—the piece that detailed the 2012 death of a 16-year-old boy in a West Allis bodega.

After the credits rolled, director Spencer Chumbley and cinematographer Erik Ljung came on stage to discuss the film. Corey’s father (and primary interviewee) Craig joined them. Having just witnessed the life literally being squeezed out of his son and enduring the sight of his own grief, Stingley spoke with purpose and composure about the event that prematurely took his son, saying he will continue to seek justice. Flanked by tales of marooned space travelers and a charitable opera singer, it was a reminder of the real-life stories film can and must tell when other channels fail to do so. [Tyler Maas]


3. Milwaukee welcomes John Axford back, now that he’s at least not a Cardinal
The Ax Man has continued to support Milwaukee Film even after being unceremoniously dumped by the Brew City after setting the Brewers’ single-season saves record in 2011, and then underperforming the following season. He seemed a tad nervous onstage introducing Stanley Kubrick’s classic black comedy Dr. Strangelove, but he expressed both his disappointment at being unable to attend last year’s screening of 2001: A Space Odyssey, and his gratitude to the city for making him and his family feel at home whenever they return here. The crowd responded graciously. We were of a mind to wipe the past three major-league baseball seasons from our memory as it was, and it’s tough to muster any division-rivalry against the historically pitiful Pirates anyway. Besides, Axford was sponsoring a 35mm screening of Dr. Strangelove. That’s enough to put anybody back in our good graces. [CR]

4. High fives and bowling stories on a Friday afternoon
With the Brewers not participating in the postseason and the week’s Packers game already in the books, the final MFF screening of “Shorts: Sports Shorts. Shorts About Sports” last Friday afternoon spelled sporty relief for moviegoers. Marquette grad and Community cast member Danny Pudi’s Untucked was the only short of local note. However, the cutesy piece about a trio of six-year-old girl skaters in Gnarly In Pink, a historical examination of the high five (The High Five), and what’s called “The Greatest Bowling Story Ever Told” proved the most entertaining shorts for the 2 p.m. turnout. [TM]

5. A giant, evil alien vagina embedded in the bedroom wall of an Irish teenager, subsequently impregnated by said teenager
“The Best Damn F*#@ing Midnight Program Ever. Sh*t” is not for the squeamish. We were prepared to be weirded out, freaked out, and grossed out, but even after seeing a cute cartoon bunny humping a dead person’s head (The Obvious Child), we were blindsided by the un-unseeable imagery of Box Room. The overall crop of shorts in this program was much better than last year’s edition, which often sacrificed writing for shock value, but we’re still dreading these barf-inducing scenes haunting our dreams one of these nights. [CR]

6. The big room at the Oriental becomes an even crazier dance party than last year
Last year, Milwaukee Film screened Jonathan Demme’s 1984 Talking Heads concert film Stop Making Sense, and as the film progressed, more and more people began to get out of their seats to dance in the aisles. This year, word had gotten out. The Oriental was pretty packed on the second Saturday of the festival, and folks were on their feet almost from the get-go, many forming into long conga lines that snaked around the entire theater as David Byrne whipped his band into a frenzy onscreen. We’re not sure if this phenomenon will now be a yearly event, but we can’t imagine having more fun in a movie theater (aside from maybe Rocky Horror Picture Show), nor any film with comparable booty-shaking capabilities. Former Talking Head Jerry Harrison (who introduced the film) was able to enjoy spectacle as well. [CR]

7. Bending spoons with James “The Amazing” Randi
When we first got our grubby hands on the program book for this year’s fest, our eyes lit up when we got to An Honest Liar, a documentary on the life of magician/psychic debunker James “The Amazing” Randi. We were thrilled to interview Randi a few days before the film first screened, even more thrilled to meet the man (and his partner, Dayvi Pena) at Andy Nunemaker’s always-swank Filmmaker’s Brunch a few days later, and really, really thrilled to introduce a second screening of An Honest Liar and lead a post-film Q&A with Randi, Pena, and co-director Tyler Measom—complete with an impromptu spoon-bending and rope-escape trick. Leading up to the film, we were worried that we were the only nerds in town who considered Randi something of a childhood hero. Judging from the sold-out Downer Theater, the standing ovation for the 86-year-old skeptical hero, and the throng of people waiting to get their pictures taken with him after the film, we clearly weren’t alone. Thanks, Milwaukee Film, for bringing us out of the woodwork. [Matt Wild] 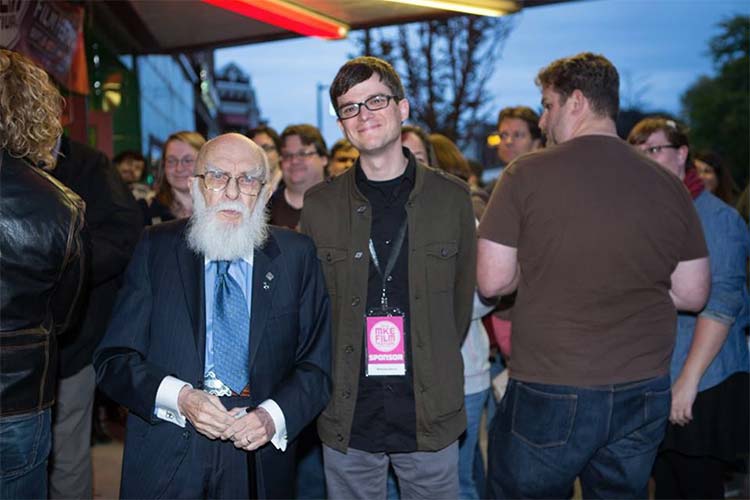 8. Milwaukee’s recent love affair with Nick Cave continues
Nick Cave And The Bad Seeds played the Milwaukee Theatre back in June, ending a decades-long absence from the Brew City—unless you count the film fest. Last year featured a screening of Wim Wenders’ classic surrealistic romance Wings Of Desire, which features a captivating performance by Cave and his band. This year, the new Cave documentary 20,000 Days On Earth turned out to be one of the major highlights of the Sound Vision series. The film follows Cave through ostensibly his 20,000th day of living, as he works on his new album (last year’s excellent Push The Sky Away), talks to his psychiatrist, performs with the Bad Seeds, and ruminates philosophically about the nature of his art and his personal history. It may stretch the boundaries of what can technically be considered a documentary, but it was one of the most powerful films we saw over the past two weeks. [CR]

9. Foreign territory
The Milwaukee Film Festival is hands down the best opportunity to see foreign films in theaters. A stacked lineup of movies from six continents—here’s hoping for an Antarctic film next year!—rounded out the local selections, competition flicks, and anniversary showings of cinema classics. Other than Russian silent film Man With A Movie Camera (which was in a league of its own), Mexican “comedy” Club Sandwich was an emotional affair, whereas Netherlands/Belgium-shot Don’t Leave Me squeezed a surprising amount of laughs from heavy, nihilistic, booze-soaked plot points. [TM]

10. Dear MKE’s local love-letter is returned to sender
About Face Media and a cluster of other local names (NEWaukee and OnMilwaukee among them) have sought local directors, editors, and other crew to tell some of Milwaukee’s interesting and lesser known stories using subjects who makes our city a great and diverse place to live. Just before The Surface closed out the fest for good, a hefty batch of Dear MKE shorts were shown. Yes, some certainly bordered on propaganda that were set on less-than-subtly urging the audience (who paid to support local film) to accept something they already knew: Milwaukee is a great place to live. Still, the vast majority of the localized vignettes captured some truly interesting and inspiring subjects who each play a small-but-significant role in Milwaukee’s ongoing movie—from ballerinas and cabbies, to architects and chefs. Matt Mixon, the final director interviewed during the Dear MKE screening said it best. “The Film Fest is rad.” [TM]