After a strong showing last week by Cactus Club, I decided Riverwest needed some love, too. The obvious choice was the neighborhood’s newest bar, High Dive. I figured longtime Riverwest bartender and recent bar owner Jason McBrady would surely know how to throw a Packers party. Previously occupied by Impala Lounge, High Dive has gotten off to a successful start. I’ve attended a handful of events in the bar’s first couple months of life and they have all been packed. This isn’t entirely surprising, as the prime location on Center Street, low prices (regular $2 special on PBR), and local celebrity bartenders make it a go-to destination. Sunday evening, The Fatty Acids’ Matt Pappas and local booking aficionado Eric Schultz were slingin’ drinks.

As I approached the building, I heard live music. I started to panic, worrying that I somehow missed the memo that High Dive wouldn’t be showing the game and instead would host a band. I entered to find none other than Jay Anderson with his new trio, Stomata. Featuring Anderson on sax, Dave Schoepke on drums, and John Simons on bass (and Neil Davis jumping in on guitar for the evening), the group provided pre-game entertainment. I grew up with jazz, so it felt fitting to take in a couple of standards before the showdown. This night was an exception due to the game, but Stomata will be performing at High Dive every Sunday night from 7:30-9:30 p.m.

Have I mentioned I was nursing a two-day hangover, courtesy of Tracks, Foundation, and Linneman’s? The well-known hangover-healing powers of Bloody Marys are, however, not commonly called upon at 7 p.m. While High Dive didn’t boast any particular drink specials, it was serving bloodies ($5) later than your average bar. I shamelessly took advantage of this.

The game-day atmosphere was very laid back. The bar didn’t fully populate until halftime. Prior to the end of the second quarter, the patrons could be easily split into two groups: the group that was anxiously watching and yelling obscenities with Pappas, and the group that was casually watching and only perked up when a touchdown occurred. I would recommend checking out game days here for the casual fan. There were plenty of people in attendance who probably couldn’t name any of Green Bay’s second-string wide receivers, and honestly, that’s fine. I know that I can get up on a high horse about the Pack, but High Dive boasts a low-key fandom. There were a handful of us screaming at the TVs, but there were also plenty of folks who never raised their voice. I appreciated this contrast.

Onto the service: fantastic. Schultz was extremely attentive and even refilled my water glass without me asking—a rarity in bars, which I was thankful for on my drive back to my Bay View abode. It was Pappas’ first-ever shift at High Dive, and he took care of the commercial break tunes, complete with a particular affinity for Kid Rock’s “Cowboy.” This brought particular enjoyment to my heart, as Burlington native Tony Romo (i.e. Dallas Cowboys QB) broke his collarbone during the Cowboys-Eagles game which will leave him on the sidelines for most of the season.

Let’s talk about the food offerings. The spread wasn’t expansive, but it was more than adequate. McBrady brought two huge pans of homemade mac ’n’ cheese. One dish had ghost pepperjack and the other had goat cheese with a Cheez-It topping. The best part was that McBrady used shells instead of elbow macaroni. I’m a bit of a snob when it comes to my mac ’n’ cheese: I’m lactose intolerant so whenever I’m going to consume dairy, it better be worth it and WHOA, it was. McBrady warned me that the ghost pepper dish was spicy, and I should have heeded his warning. After one bite, I was left shoveling mouthfuls of the goat cheese portion to ease the pain (good pain though). The best part about this is that it wasn’t a one-time thing. Apparently, there will be a smoked gouda variation next week.

Thankfully the Packers took home the “W.” This resulted in a couple of touchdown shots (which were pretty much margaritas) courtesy of James Jones and Richard Rodgers. Eddie Lacy left the game in the first quarter due to injury, much to my fantasy team’s dismay. However, James Starks had a solid game with 95 yards. His drives even resembled Lacy in his ability to power through Seattle’s defenders. A fumble recovery by Micah Hyde and an interception by Jayrone Elliott also aided in the victory. On a different note, I was astounded and appalled by the number of Seahawks fans in the crowd at Lambeau. I get that Russell Wilson went to Madison, but have some self-respect. You live in Wisconsin, you cheer for the Packers. No flags with the number 12 on them. Shame on you.

Second to defeating Seattle, the food was the star of this show. You can’t go wrong with $2 PBR tallboys, either. If you’re looking for a relaxed venue to view the game, this is your spot. 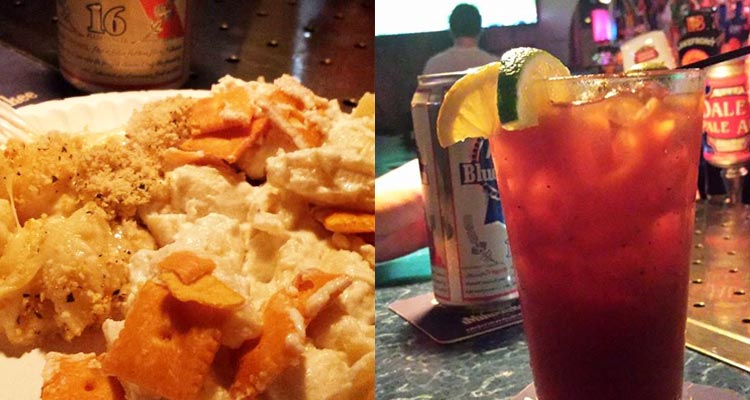