Annual local award season has come to Milwaukee in full force. Not coincidentally, local award backlash season arrived in Milwaukee just nanoseconds later. The party paramount in the crosshairs of crotchety commenters is, as always, Shepherd Express’ perennially terrible Best Of Milwaukee ballot. The unabashedly desperate plea for a discounted ad contract in exchange for a mass-produced plaque and a (usually) undeserved title culled from existing advertisers and votes from what remains of their readership continually churns out gems like that plucky upstart restaurant McDonald’s winning Best French Fries, The Original Pancake House making its locations in 26 other states proud with some Milwaukee-specific hardware, and the BoDeans being named Milwaukee’s Best Rock Band…of 2014—which was last year, for those of you who are scoring at home and who have heard rock music since 1995. Ashamed to put his or her name beside last year’s Best Filmmaker blurb (which went to a wedding photographer), a ShepEx writer used the backhanded “Alan Smithee” pseudonym. Encouraging!

This year features more of the same. The categories have become more specific (meaning more awards and more offers for discounted ad packages) and, as a direct result, the categories have become somehow even more laughable. Will Old Country Buffet take home best buffet honors? Can Chipotle Mexican Grill and Buffalo Wild Wings win best burrito and chicken wings, respectively? Will Whole Foods best Trader Joe’s in the non-local battle for local grocer supremacy? Could PNC actually be the best financial institution in Milwaukee to get a business loan and to open a checking account? Who knows? Frankly, once ad execs get their invoices out the month after awards are issued, who cares? Residents and business owners still care.

Beyond the award abominations acknowledged above, H&R Block being touted for the vaunted tax adviser title, and Lyft facing off against Uber for best Milwaukee cab company, a wealth of regional ire has been pointed in the direction of Mozzaluna Pizzeria & Ristorante, a cozy Brookfield trattoria that just so happens to be up for a staggering 22 Best Of Milwaukee awards in the following categories:

What, no nomination for Best Hip-Hop Act or Most Improved Chiropractor awards? That’s bullshit! Naturally, people had no problem connecting the dots (present company included).

And I wasn’t alone.

The abundance of nominations could mean one of three things: 1. Mozzaluna owners, employees, and regulars took the time to nominate the restaurant for every possible category and, evidently, laughably few people submitted nominations if so many Mozzaluna mentions got through. 2. A ShepEx ad executive is angling hard for that sweet, sweet Mozzaluna account. 3. Mozzaluna Pizzeria & Ristorante is not only such a great bar and restaurant that it doesn’t even matter that it’s located in a different fucking city, it might be the best place on EARTH. Instead of (only) making cheap jokes online and adding fuel to the flames of Facebook outrage, I decided to put my BOM ballot where my mouth was and pay a visit to Mozzaluna Pizzeria & Ristorante.

On location alone, Mozzaluna should’ve been prohibited from entering. It’s not on the outskirts of Milwaukee. It’s deep into Brookfield…like “I don’t know, maybe Sheriff David Clarke isn’t such a bad guy”-deep into Brookfield. Even once my 17.3-mile, 36-minute (construction!) trek was through, I was parked in a secluded parking lot with no restaurant—much less a “Ristorante”—anywhere in sight. Fortunately, I happened upon the Stonewood Village directory, which led me past the bridal shoppes, a chocolatier, and All ’Bout Children Preschool to a quaint courtyard that gave way to, gulp, Mozzaluna. It looked like a campground office. My expectations were already thrown off. Who knows, though, maybe I was actually about to enter the best restaurant in Milwaukee…in Brookfield.

Entering shortly after the 4 p.m. open time, my arrival seemed to be interrupting a staff meeting between four employees. Wordless, the bartender—hopefully not Best Bartender nominee Bill Orban—shot me an annoyed, confused glare as a stood in the super small (maybe 20-capacity) bar. To Mozzaluna’s credit, each of the TVs played ESPN. Sports Bar: Check! As I continued to wait for service, I took note of the tap line (the bottom of which was emblazoned with a “Best Of Milwaukee 2015: Vote Now” sticker), which featured fewer than 10 options, the vast majority of which were not craft brews. Suck it, Von Trier and Palm Tavern! Blue Moon rulez!

Eventually, a server named John intercepted me from the decidedly not-award-winning bartending exchange and led me to a table. Before I sat down, I asked if I could be seated by the stage, which seemed to perplex him. I asked where the bands played (being the place vying for a music venue title against Pabst Theater and Turner Hall and all). He took me around the corner to see the performance space where the likes of VIVO and Will Ulrich just tore shit up. “We pull those tables away when bands come in,” John told me. 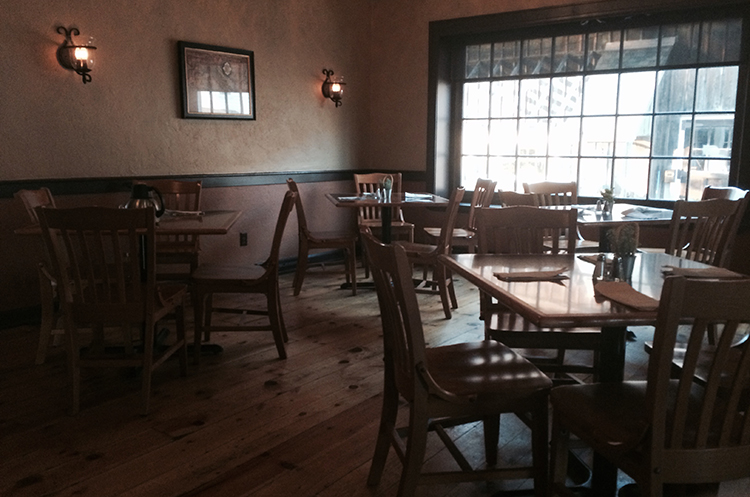 I took a seat in the back near the stage that wasn’t actually a stage and turned down the alluring (and potentially award-winning) happy hour special: A Miller Lite. Instead, I needed to taste the Italian restaurant’s margarita that was allegedly so goddamn delicious that it took a slot away from countless deserving Mexican establishments. The house margarita on the rocks ($5.25) was fine. With rail tequila and pre-made mix, it was far from special. But after navigating construction in an unfamiliar suburb, it felt good to take the edge off with a cool drink and some quality reading. 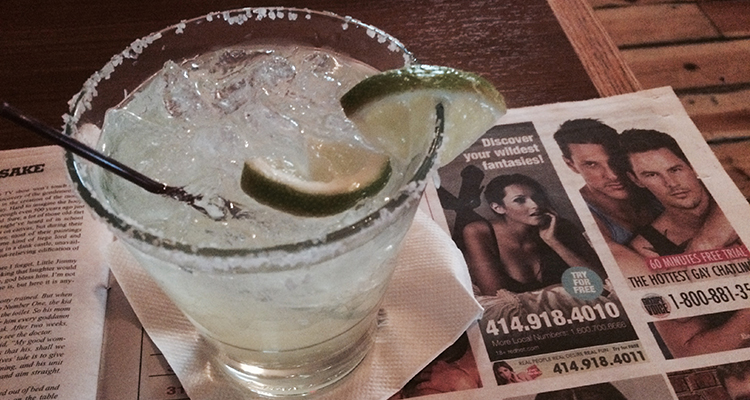 For my entree, I went for the gnocchi with meat sauce ($14.99). Though I wanted to see if the soup, pizza, seafood, and NINETEEN different wines all deserved the alt-weekly’s attention as well, it seems as if ShepEx and I have different definitions of “On A Budget.” Everything was pretty expensive. What is this, Brookfield? Oh wait. Anyway, the gnocchi was actually pretty great. The small potato dumplings were so soft that chewing was absolutely optional. The sauce was fresh and the basil countered the savory seasoning of the meat. The portions were respectable, the garlic bread was baked to golden perfection, and John truly made a case for Best Restaurant Service. 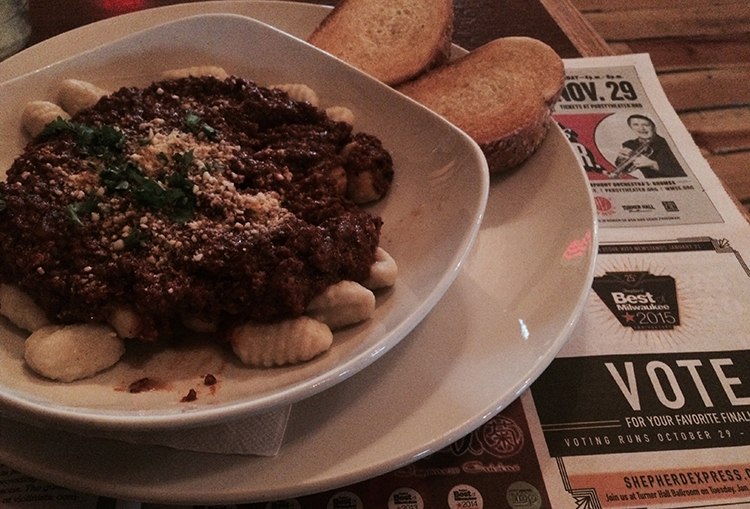 I’m not sure how a place can be a sports bar, romantic, child friendly, a music venue, and craft beer bar to be seen in all categories at once, and it appears Mozzaluna isn’t either. The dim back room near the nearby Open Bible Fellowship Inc. building could make for a romantic meal, but that works against its sports bar and child friendly appeal. By trying to succeed at being so many things, the innumerable things it wasn’t stood out more than anything else. A good Italian restaurant’s current reputation in the eyes of some people is the prime example of how bad, poorly executed, and tone deaf the Best Of Milwaukee awards have become. Without the Best Of Milwaukee ballot, I can say with certainty that I never would have gone to Mozzaluna Pizzeria & Ristorante, where, all things considered, I had a good meal. It brought attention to the place, but (as I pondered on my 41-minute drive home) is that type of attention worth it? I honestly don’t know the answer anymore.