Today, Tuesday, October 4, 2016, is National Taco Day. It’s a day for celebration, reverence, and tacos. According to the National Taco Day website, “Last year Americans ate over 4.5 billion tacos! That’s 490,000 miles of tacos, which could take you to the moon and back or, if you prefer, could, at 775 million pounds, equal the weight of two Empire State Buildings.” That’s a lot of tacos.

In observance of National Taco Day, we rounded up everything we’ve ever written about tacos in our nearly three-year existence. From eating at every Taco Bell in Milwaukee (in eight hours!) to that time everyone lost their shit about Milwaukee Taco Fest, here are our loving tributes to the beloved taco.

Taco Tuesday of Reckoning: I ate at every Milwaukee Taco Bell in 8 hours
“The Taco Tuesday of Reckoning was not pretty, it was not fun, and few were aware of what they were witnessing. It took eight hours, 13 Taco Bell stops, 83.7 miles, an unthinkable number of calories, and probably at least some hair and/or particulate fecal matter to produce two heroes. Here is our story.”

I went to Chicago to (try to) get drunk at Taco Bell
“Though I made a treacherous, Andy DuFresne-like crawl through a figurative sewer of refried beans, Fire Sauce, and inorganic beef substitute only a few months ago, the recent announcement that a Taco Bell in Chicago was the first in the world to offer alcohol was a signal from above…or below (?) that my work was not done. I had to temporarily return to the prison of my worst self. Like a bank robber throwing caution to the wind for one last score or the grizzled veteran police detective—clearly too old for this shit—postponing his retirement to put away one more perp, I had no choice but to do this. I had to get drunk at a Taco Bell.” 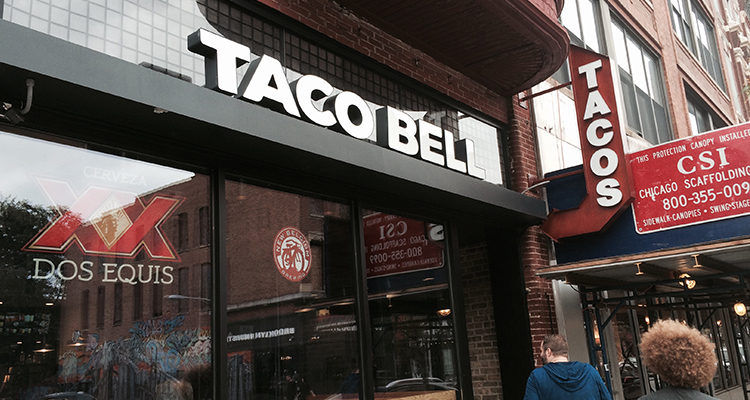 In search of Milwaukee’s most authentic Mexican restaurants
“But why be placated when there’s such a wealth of tacos, tortas, tripas, tamales, empanadas, sincronizadas, sopas, and sesos well beyond the usual Milwaukee run of familiar joints? So we set out to create a culinary roadmap, pointing west and south, and as far away as possible from the processed cheddar, the salted glasses, the lettuce and tomato taco fillings, and the over-publicized parrillada of gringo-land Mexican.”

Milwaukee Taco Fest is under fire for cultural appropriation
“In a widely disseminated Medium piece entitled ‘Milwaukee Taco Fest; I’m not your sidekick,’ local sous-chef and self-described ‘proud Mexican-American’ Gil Amador-Licea details his many misgivings with the event. ‘This morning I learned about a forthcoming event in Milwaukee, Taco Fest,’ Amador-Licea begins. ‘Apparently this is going to be their third one already, so I don’t know much about the organizers and I don’t feel like going personal on them, so let me go straight into cultural appropriation of Mexican cuisine, traditions and adjudication of faux paraphernalia such as culturally inaccurate sombreros and adorable chihuahuas with tiny colorful Spanish Flamenco dancer dresses.'”

Let’s talk about that whole Milwaukee Taco Fest thing
“Earlier this week, a local sous-chef and self-described ‘proud Mexican-American’ named Gil Amador-Licea wrote a lengthy piece detailing his misgivings with the upcoming Milwaukee Taco Fest. Amador-Licea claimed the event was guilty of ‘cultural appropriation,’ and that it mocked Mexican culture and culinary heritage. The Internet, as it’s wont to do, went nuts. Ryan, Evan, and Matt try to make sense of the whole thing, wondering if food can be racist, if the search for ‘authentic’ cuisine is misguided, and if anyone can learn anything from this taco-encrusted dust-up.”

New festival is the taco the town
“There will also be a chihuahua contest and tequila sampling (for charge). The wrestlers of Mondo Lucha actually redeem the flawed fest quite a bit, yet the only ‘ignition of [our] human imagination’ this community event coveys is imagining more samples from a wider array of vendors. Still, if there’s going to be an elaborate local undertaking to honor a foodstuff that isn’t particularly renowned in town, tacos were a great choice. So if you want to drop $16-$20 on between one and five tacos, mark your calendar for May 31.”

I ate Dave Begel’s “Top 10 Milwaukee foods to eat while you are driving” while I was driving
“My teeth went through what seemed like eight layers of tortilla on my first bite into the burrito. Really, one half of the burrito was rolled up flour and the other half was a chorizo, queso, and refried beans mixture. I have to hand it to Begel here, though. Even with the chorizo, no grease spilled onto my shirt. My passengers, on the other hand, each experienced stains on the first couple bites of their tacos. But with a half-filled burrito in my hand, I started questioning my motives. What was I accomplishing here? Why was I wearing this ridiculous T-shirt and pants combo? I didn’t really want to do this challenge anymore, and I still had six more stops to go.” 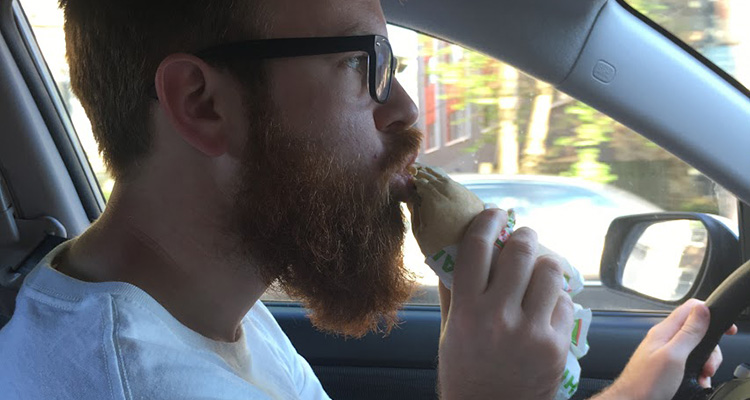 The MexItalian Food Truck is so random, so awesome
“We quickly learned there was no taco pizza, or any other type of pizza. There’s no merger of Mexican and Italian food in any single item. Rather, the ‘Mex’ portion of the name is satisfied through items like tacos, tortas, tostadas, and burritos. The quesadilla features mozzarella cheese, but the Italian portion of the truck is otherwise unimpeded. Instead of pizza, the truck specializes in rigatoni- and linguine-based pasta dishes, salads, and roast beef sandwiches. Standing there alone on the sidewalk, it’s safe to say we weirded out the young woman who took our order when we jumped back and forth between the two menus when selecting our foods.”

Search For The Perfect Packers Bar, Week 3: Frank’s Power Plant
“At halftime, a taco bar was unveiled. I eat tacos multiple times during the week, so this was welcomed with open arms. Frank’s had sour cream (+1), cilantro (+1, and screw all of you who think it tastes like dish soap), and corn tortillas (+1k). Maybe I had three. Who knows? Who cares?”

23 bread-free Summerfest foods to eat when Smash Mouth plays
“Like a slightly worse version of Botanas, La Perla offers tacos, burritos, nachos, tamales, and more. The taco salad is among the few options that doesn’t feature a tortilla. Again, if you can go to a purveyor of Mexican food and order a salad, you’re stronger-willed than we are.”

We ate all the new “food items” at Summerfest
“Downtown taco purveyor Vagabond doesn’t get a lot of press, which is too bad, since it’s food is always agreeably solid and its atmosphere is always agreeably funky. As for Vagabond’s new Summerfest items, the Falafel Curry Tacos are agreeably excellent. Light, tasty, fresh and refreshing, a pair of these eye-popping concoctions are a far cry from the more gut-busting food gunk featured throughout the rest of the grounds. Perfect for relaxing in the shade while watching some punk kids messing around on those giant instruments near the south gate.” 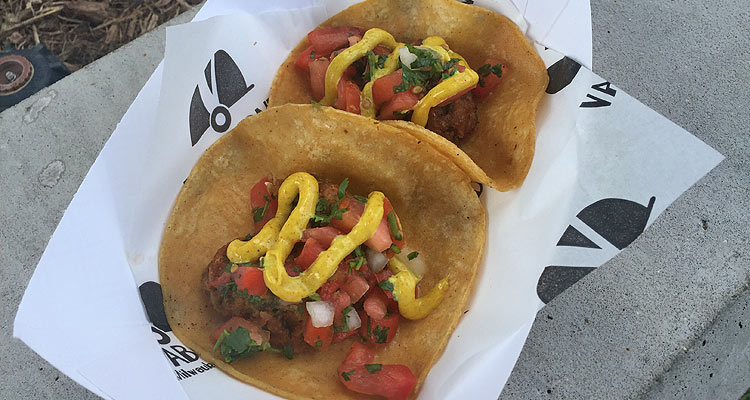 First Impression: Taco Bandito
“Thus, it’s a strange time for Taco Bandito (605 S. 1st Street, 414-204-TACO) to come to the neighborhood. In mid August, Roman Torrez, who owned and operated Mr. Webo’s in Bay View until late 2014, opened a small over-the-counter restaurant in a gas station plaza. With a somewhat limited menu, reduced prices, and speedy service that assures customers they’ll be ‘in and out like a robbery,’ can the small restaurant’s even smaller sidesteps help differentiate Taco Bandito from its older, more established (and less filling station-adjacent) Mexican cuisine contemporaries?”

First Impression: Taco Stop MKE
“In its first two months in business, Taco Stop MKE (513 N. Chicago Ave., South Milwaukee) has tried to make a name for itself by specializing in genuine south of the border cuisine. With its simple ‘authentic Mexican food’ promise, the young taqueria is hoping less is more. Can Taco Stop MKE extend the South Side’s impeccable reputation for quality Mexican fare even further south—three cities south, to be exact—or should Milwaukeeans save the trip and just focus on the array of quality restaurants within city limits?”

First Impression: C-viche
“It was all too much: our overzealous order quantity, the flavor, and in the kitchen’s one misstep, literally—the taco fillings leading to much burstage. The over-stuffing can and should be remedied by the double-tortilla method. But everything spilling messily in front of us seemed metaphorical somehow. Smacking lips, sweating a bit, contented, nursing a light but dark Brazilian brew, trying to process the heady wreckage before us, it felt time for a smoke or sleep, or whatever your personal contemplative act of post-coital satisfaction.”

First Impression: Urban Beets Cafe & Juicery
“The trio of ‘tacos’ came wrapped in fresh and crunchy leaves of romaine lettuce. The filling was a savory slurry of nuts, sunflower seeds, carrots, and roasted tomatoes topped with pico de gallo—bolstered by the inclusion of diced jalapeño—and sizable hunks of avocado. The filling was smokey with a saltiness akin to taco seasoning that perfectly countered the refreshing romaine ‘shells’ and cilantro. Our tacos came with a side order of either vegan potato chips or salad. We went with the salad, and were quite happy with the Caesar we’d received, with its crunchy flax and soy nut topping and dressing that tasted remarkably similar to its creamy and anchovy-including brethren.”

Tracklist: 9 excessive drink garnishes
“Water Picante would give the vital, hydrating, and life-sustaining combination of hydrogen and oxygen a much-needed dose of Latin flare. Okay, so you’re basically just putting a taco atop a glass of water, but we’ve found putting a taco on or near anything helps.” 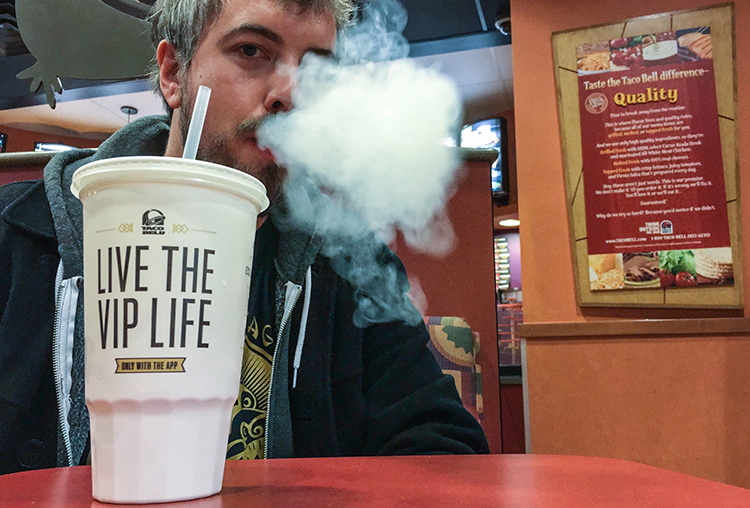