Lately, your Facebook feed has undoubtedly been cluttered with eulogies for Robin Williams, reactions to the abuse of power in Missouri, and videos of people courageously dousing their head with cold water to, like, avoid donating to a charity or something. Thus, it’s possible you’ve missed this: the Bloody Mary has officially jumped the shark. A cocktail that was once lightly garnished—in likely effort to distract customers from the realization that they had spent $9.50 for what basically amounts to a pint of vodka and tomato juice—with a pickle spear, some olives, and maybe a pearl onion is the latest medium in which America’s patented proclivity for inventive edible excess can be showcased.

It started with small additions such as a handful of string cheese and a wayward beef stick. Soon, accoutrements like sliders and slices of pizza were incorporated. Finally, the deep-fried nail in the cocktail’s coffin has come by way of the new Sobelmans mixologist mutation called “Chicken Fried Bloody Beast.” At $50 ($5 of which, commendably, is donated to Hunger Task Force), the alcoholic amalgam is an 80-ounce pitcher of Bloody Mary, an entire flash fried chicken, almost an entire jar of pickles, brussels sprouts, olives, mushrooms, celery, cheese, bacon-wrapped cheese balls, and more. The drink (which is recommended to be shared between four people) quickly got tons of press from local, national, and international outlets alike. Sobelmans might be the best of the “drinks with a bunch of shit in them” genre, but elaborate garnishing is not at all exclusive to the Milwaukee restaurant.

Invest in wooden skewer futures now, as stuff like this is going on worldwide and is only getting bigger. Amid all the novelty, it’s almost like bars lost sight of the true reason to drink…trying/failing to bury the looming feeling that you’re just playing a meaningless background part in the unintentional dark comedy that is human existence. So if we can’t beat the garnish trend—or solve it with some type of self-important bucket-oriented challenge—we’ll not only join in, we’ll offer some suggestions for other classic tavern standards that could be improved with the unnecessary incorporation of food.

1. The Down Home Manhattan
The Manhattan is a boozy nod to a bygone era. It’s potent, classic, and implies sophistication. However, it also carries an aura of snootiness. By serving it on a platter of biscuits and gravy, even the most up-their-own-ass executive type becomes folksy and accessible to observers.

2. Pepperoni Peroni
For our money, the green bottle “Italian” (in the sense that pizza is Italian) swill that is Peroni has a spot on the shortlist of most overrated beers ever. So drinking it through a hollowed out stick of pepperoni would surely help, right? It literally cannot hurt.

3. Margarita with a fuck-ton of limes in it
Why settle for salting a rim of a glass when you can be assaulting it with 30 or so lime wedges completely surrounding the glass? “Wasteful” and “unnecessary” you say? Valid point.

4. Hamm’s sandwich
With its low price, no-frills flavor, and a can design that hasn’t been updated in approximately 500 years, Hamm’s appeals to those who place a consumable’s function above all else. The ham sandwich is the food equivalent to the affordable brew sharing its phonetic namesake. Why not merge them? Rubber band two slices of store brand white bread to a Hamm’s tallboy can. Then drape a slice of Carl Buddig ham over the top of the can. (The bartender should bite a small hole in the ham beneath where the can’s mouth will be in lieu of a tip.) Serve with a pickle spear and a shot glass full of generic yellow mustard.

5. Water picante
It’s no Diet Mountain Dew Baja Blast, but water is great. It makes up most of our planet, as well as the majority of our own bodies. Still, the flavorless, abundant, (ideally) clear liquid is suspect to criticism for being too boring. Water Picante would give the vital, hydrating, and life-sustaining combination of hydrogen and oxygen a much-needed dose of Latin flare. Okay, so you’re basically just putting a taco atop a glass of water, but we’ve found putting a taco on or near anything helps. 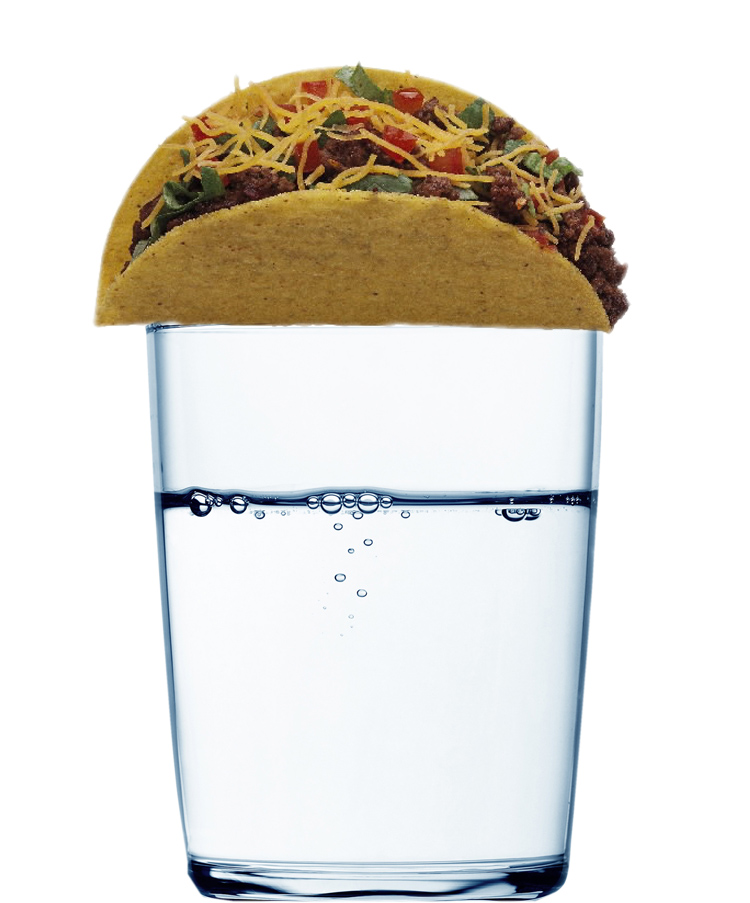 6. Chili ’Dog
Chili with beer in it isn’t altogether unheard of, but chili with Red Dog as the star ingredient is far from common territory. Maybe there’s a reason for that. Even if there is, it still beats drinking it.

8. The 2009
Request the 2009 and the bartender will “ice you” with a Smirnoff Ice—in the spirit of the short-lived and possibly-in-house-created “Bros Icing Bros” viral movement. After it’s chugged, you’ll be handed a cronut to eat and a digital download code for Ting Ting’s hit song “That’s Not My Name.”

9. Chicken In A Waffle Cone in a Jagerbomb
This is like the Russian nesting doll of things that are shitty for your body. The Summerfest/State Fair dietary staple (or broken dietary staple) features chicken strips, coleslaw, and candied bacon heaped into a waffle cone. That can then be dropped into a rocks glass with Jagermesiter and Red Bull. Finally, the mixture can be poured into your mouth before your stomach churns and you charf it into the bushes. Circle of life, people.