After I arguably risked death and certainly demolished my spirit whilst eating something at every Taco Bell in Milwaukee over the course of eight hours back in mid-May, I’ve severely limited my runs to the border. I went there the day I moved because moving is expensive and screw cooking anything on moving day, right? About a month ago, I decided to reluctantly make my first visit to the new Morgan Avenue location, where I proceeded to wait 20 minutes for a Cheesy Bean & Rice Burrito and, in the process, witness a lengthy argument between a flustered manager and a woman I can only describe as “America: The Person.” Beyond that, I can honestly say I’ve had no urge to put Taco Bell into my body. In fact, I’m proud to say I’ve taken a healthy turn since the personal/journalistic low. I’ve been eating better. I feel energetic, and the artificial preservatives in my system have been replaced by an utterly unfamiliar sensation others have told me is called “happiness.”

Though I made a treacherous, Andy DuFresne-like crawl through a figurative sewer of refried beans, Fire Sauce, and inorganic beef substitute only a few months ago, the recent announcement that a Taco Bell in Chicago was the first in the world to offer alcohol was a signal from above…or below (?) that my work was not done. I had to temporarily return to the prison of my worst self. Like a bank robber throwing caution to the wind for one last score or the grizzled veteran police detective—clearly too old for this shit—postponing his retirement to put away one more perp, I had no choice but to do this. I had to get drunk at a Taco Bell.

The Taco Bell Cantina in the Wicker Park neighborhood of Chicago became the first Taco Bell in the world to offer alcohol when the location expanded its menu on September 22. By this point, droves of national writers have already paid the groundbreaking franchisee a visit to chronicle what the Cantina’s frozen alcohol drinks tasted like. But I ventured a guess that few people, if anyone, had the combined commitment and shamelessness to get shitfaced in a Taco Bell. Sure, the late-night establishment has served “food” to millions of drunk people through the years, but it’s quite possible they’ve yet to be responsible for over-serving alcohol to someone. The first day I was able to leave the state last week, I recruited others to join me as I tried to become the first idiot to make history.

Since Sammy Arechar (who joined me on my last ill-fated Taco Bell journey) and Josh Ballew (my counterpart for a nearly six-hour all-you-can-drink mimosa brunch) recently moved to Chicago, it made sense to ask them to be part of this. It also turned out that Milwaukee comedian Greg Bach would be performing minutes away from this particular Taco Bell on Sunday night, so he would make an ideal designated driver. As far as out-of-state fast food adventures are concerned, the plan came together remarkably quick. Greg picked me up early Sunday afternoon and we were off.

We arrived around 4 p.m., since I figured there would be a line of equally terrible people who were equally eager to drink poison spiked with a different type of poison. I was wrong. Amazingly, there was no wait, even though this location was particularly small. Evidently, the “Cantina” suffix implies a cozier establishment that could seat maybe 30 people in wood tables and benches that seemed to be purposely scratched, chipped, and sanded with the specific goal of making them look old and reclaimed. A graffiti mural using Taco Bell’s color scheme and subtle logo incorporation stretched along the entirety of one wall. The front window had neon beer signs. The second set of doors situated at the entryway featured a clearly posted warning forbidding customers to leave the premises with alcoholic beverages. Upon entering, my attention immediately went to the bottles of liquor and wine prominently displayed below the menu that featured beers and “New! Twisted Freezes” on it. This was really going to happen. 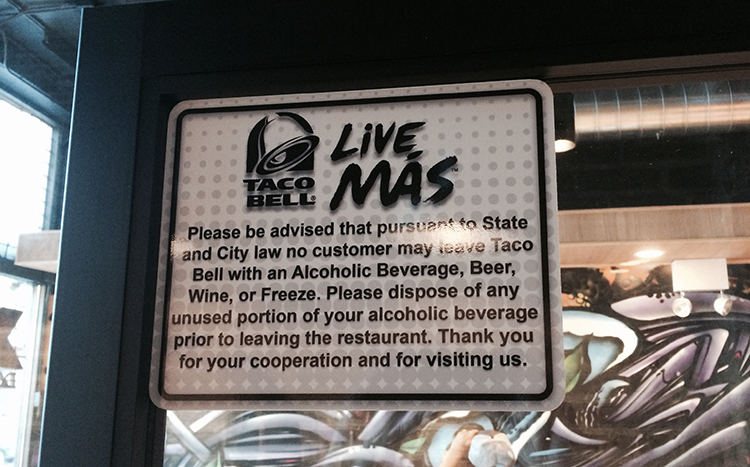 With the confidence of someone on their 21st birthday, I meekly approached the counter and clumsily placed my first order for a Beefy Five Layer Burrito, a Mtn. Dew Baja Blast Twisted Freeze with tequila and, what the hell, a Cantina Punch with rum. “Only one alcoholic beverage per order,” the woman working the counter bluntly said, surely accustomed to such attempted booze-baggery by this point. I 86ed the Cantina Punch, gave a fake name out of shame, and awaited my order. It’s worth noting that I was also asked to give ID and was reminded I was not permitted to leave the premises with my Freeze. Being the test restaurant, there was a lot riding on this, and they weren’t messing around. 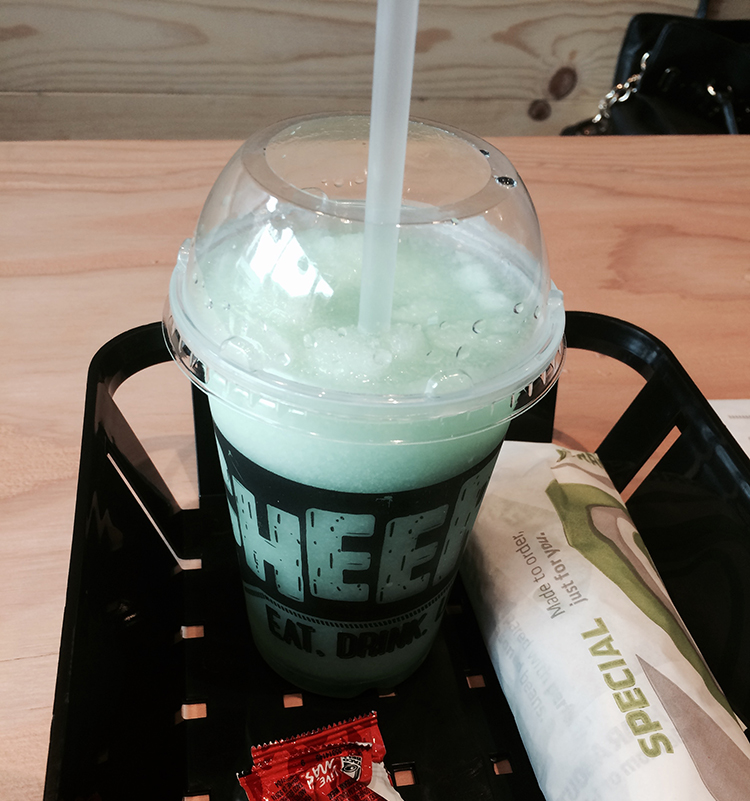 The Mtn. Dew (actually written that way on the menu) Baja Blast Twisted Freeze came in a specially marked plastic cup with a single shot of tequila poured on top. The Don Julio pooled in a boozy reservoir around the straw before I stirred it in. Any of the freezes can be liquored up with the customer’s choice of rum ($6.19), vodka ($6.69) or tequila ($7.19). For a restaurant that sells 99 cent food items that contain the majority of one’s recommended daily fat grams, the Twisted Freeze prices were remarkably off brand. I was hoping the price reflected the flavor. It didn’t.

The artificial teal drink was incredibly sugary. I’d sworn off soda for the better part of nine months, and even before that, I stuck to diet drinks, so the Baja Blast on its own was a cataclysmic dosage of corn syrup that—combined with the greasy smattering of nacho cheese and “beef” in my burrito—was quickly murdering my system. I learned why Mountain Dew isn’t used as a mixer, especially with tequila. This had all the makings of a “the closest gas station is closed and nobody is good to drive”-type drink. Maybe vodka would’ve been a wiser mixer, but I wasn’t going to find out. 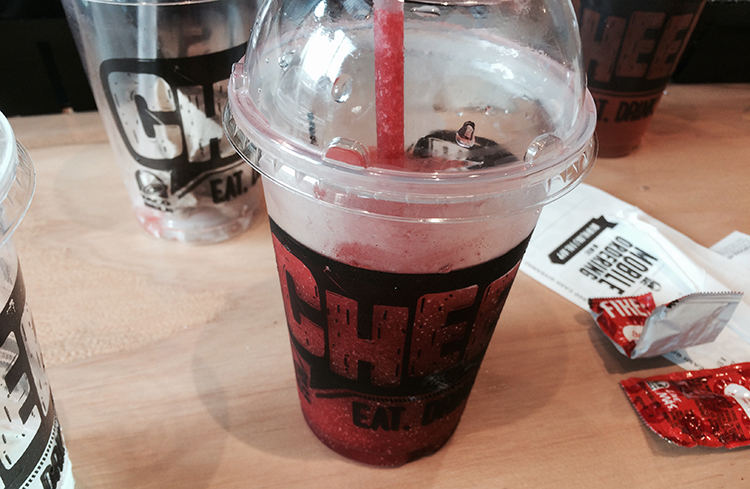 Between being a bit less intense and my decision to pair it with a more appropriate liquor, the Catalina Punch with rum ($6.19) went down a little bit easier. As I was placing my second order with some judgement from the same woman who’d taken my order 15 minutes earlier, a woman came in dressed like the princess from Beauty And The Beast for some reason. By the time I got back to my table, Josh had already dubbed her “Taco Belle” which made me supremely jealous I hadn’t thought of it first. So here’s a picture of comedian/author Josh Ballew getting a brain-freeze. 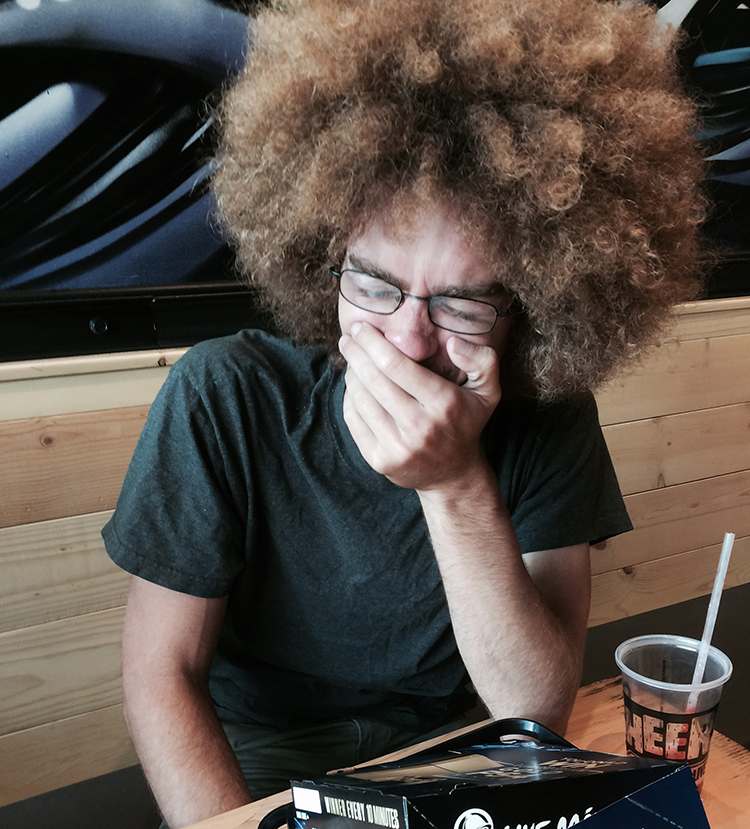 Speaking of brain-freezes, it’s probably no coincidence that the items with the strongest alcohol content are also the most difficult to drink. It’s seriously a chore to get fucked up exclusively on these things. On an almost sip-by-sip basis, Greg, Josh, and Sammy would stop mid-sentence to clutch their heads and tend to a brain-freeze. I was somehow impervious to them, but the sugar was taking a toll. I could’ve switched to beer or wine, yes, but when in Rome, drink the terrible things only the Romans drink. Once I choked down the last frozen globs of unnaturally red Freeze, I knew I wouldn’t be able to get full-on trashed at Taco Bell (or afford to, at that), but at least I could go the distance on the Twisted Freezes. Fortunately, I saved the best for last. 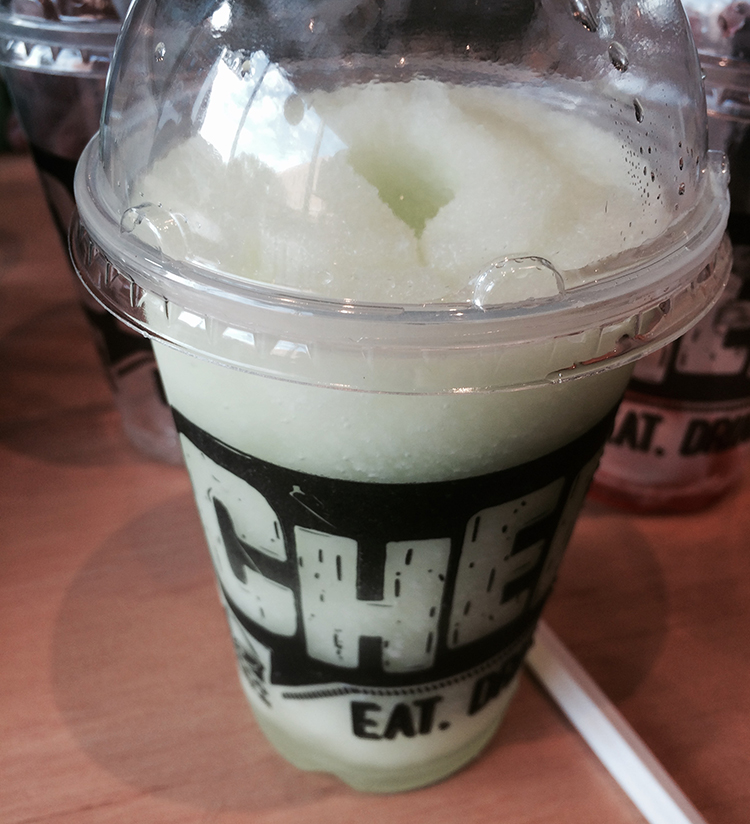 In addition to a XXL Grilled Stuffed Chicken Burrito that resembled an infant’s leg, I finished my mini-marathon of frozen drink flagellation with a Cantina Margarita with tequila. It tasted remarkably similar to a frozen margarita. A bad one, sure, but sometimes bad margaritas hit the spot better than good ones. I almost felt like I was at a real Mexican restaurant! I sipped my third drink as my comic companions finished their first and second beverages, respectively. All of a sudden, a woman shouted “SIR! SIR! SIIIIIIR!” Everybody looked up and the quaint corporate cantina went silent. Two guys were halfway out the door. They, too, now stood still and looked back. They were sternly told by a cashier to come back in or throw away their drinks. They chose the former and walked back in, obviously embarrassed. Everybody laughed at them and clapped. Even Taco Belle smiled.

With three shots of booze in my system during an hour-plus visit, I guess you could say I technically walked out of the Wicker Park fast food joint legally drunk. However, I left with a greater sense of sugar-crash, gut-rot, and regret. We walked aimlessly around the neighborhood in futile hope of helping the discomfort subside. Later, at the nearby Innertown Pub, I ordered a $2.50 pint of Pabst as I waited for Greg’s show to begin. It tasted of unkempt tap lines and was barely cold, but at least it wasn’t frozen nor $7.19. When we departed the tavern after the show, a group of people were gathered outside, all peering intently at the sky. The first “Blood Moon Eclipse” since 1982 was occurring. As the minutes ticked by, people remarked how underwhelming it was. They thought it would be better. I’m no astronomy enthusiast, but I know exactly how it feels to wait an incredibly long time to experience something, only to have it let you down. In fact, I felt that familiar pain just hours earlier while drinking alcohol at a Taco Bell. 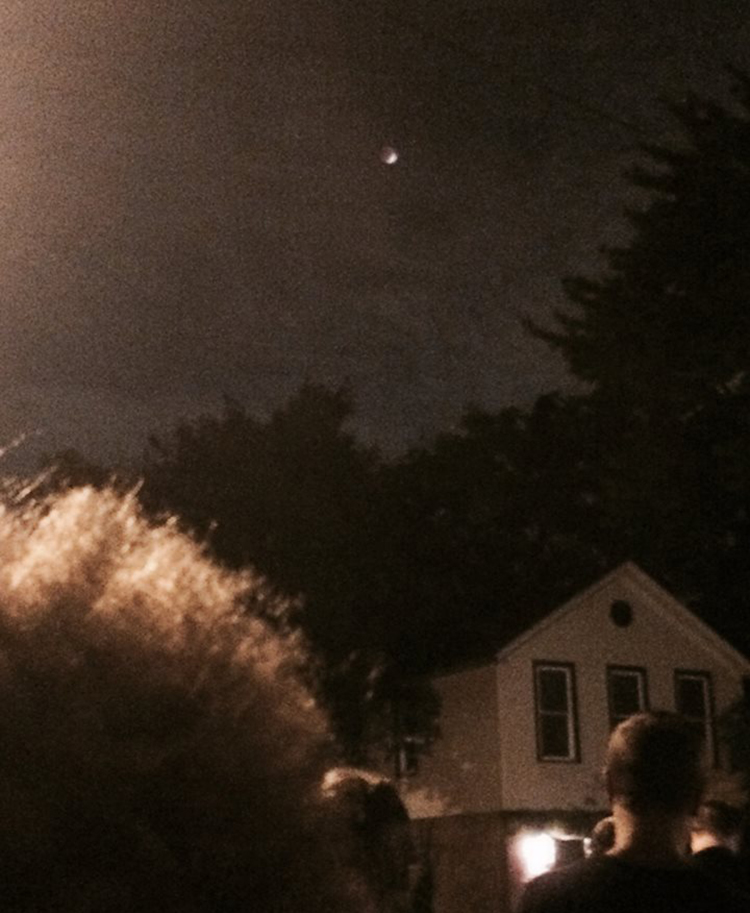