Everybody loves brunch, right? Even the most hateful soul or jaded downer who vehemently abhors anything the vast majority of the population enjoys can’t resist the appeal of rolling out of bed naturally on a weekend to gather with friends and day-drink in an acceptable setting whilst eating breakfast, lunch, or some fucked up combination of the two meals. The only drawback of the implicitly fancy dining experience is that it’s an affair that’s reserved for weekends only. But what if it wasn’t?

What if I told you there was a place in Milwaukee where the two meals coexisted freely no matter what day it was? Where the bottom shelf champagne and Bloody Marys continued flowing as the majority of the city chugged coffee and toiled in the workplace? Where an event widely considered to be a rare treat meant for Sundays and holidays was a daily occurrence? Yes, such a place exists and I have been there. One frigid Tuesday morning, I partook in the under-publicized luxury of a weekday brunch and at unexpected establishment, which came complete with bottomless mimosas. After more than five hours, numerous bottles of champagne, one employee grocery store trip, two separate meals, and a permanent change in restaurant policy, I successfully took a swanky indulgence intended to reward respectable people down to sad and uncomfortable depths. I broke brunch. This is my story.

Lots of people in metro Milwaukee know Ashley’s Que (124 W. National Ave., 414-276-7666) as the great barbeque and soul food joint that has thrived in the heart of Walker’s Point since opening in fall of 2012. The sister site to even more renowned Ashley’s Bar-B-Que on Center Street has quickly racked up an array of Best Of plaques from local publications on account of the restaurant’s outstanding pit barbeque ribs. However, not as many people know Ashley’s Que also serves brunch, and even fewer are aware that they do so every day of the week. I became aware of this tidbit after spotting a partially obstructed banner advertising what I perceived to say “$20 all you can drink Mimosa’s” while driving down Second Street. I was immediately intrigued—so much so that I didn’t even care about the incorrect apostrophe usage. There was no mention of the special on the restaurant’s website, but the scant possibility of a mid-week brunch bender eventually had me calling Ashley’s and confirming that, yes, the dream was real.

But what is a dream if you can’t share it with anyone? In effort to make the endeavor slightly less pathetic and with hopes of making the four-hour brunch period go by with minimal boredom (not to mention avoiding the always troubling internal assessment), I enlisted burgeoning Milwaukee comedian and Levity Radio co-host Josh Ballew to accompany me on the culinary quest. Though his sets cover a variety of things, Josh has a great deal of material about food. In some ways, he’s like a young biracial Jim Gaffigan, and somebody I figured would find comedic value in an especially long brunch. We agreed to meet outside the restaurant at 10 a.m. on a Tuesday, when Ashley’s was scheduled to open. For the sake of responsibility, I took an Uber and my brunch buddy bussed there. We both arrived on time, only to find the restaurant’s doors still locked as the staff prepped for the day, unaware of who was about to come through the doors. In the meantime, we walked to two nearby gas stations in an ultimately fruitless search for playing cards, just in case we (who weren’t particularly familiar with one another) needed to kill some time. At 10:12, Josh knocked on the window until someone heard—or noticed the top of his massive afro—and let us in.

After we were seated at a window-adjacent pub table, I briefed our server Leanner on the basics of our plan: we were interested in unlimited mimosas, we intended to stay until brunch ended at 2, and we were fine being her lowest priority if other customers came in. Laughing, she seemed fine with our mission, with one exception: the special actually went all day long. The human construct of time no longer mattered. Yet just as something as unfathomably vast as outer space must have a conceivable end, a beverage thought to be bottomless surely must end somewhere too. However, we could no longer hinge the bottom of a cocktail on our watches. Instead, we were now forced to find our own rock bottom. With slightly more apprehension than before, we looked at one another, looked back at Leanner, and ordered round one of many. 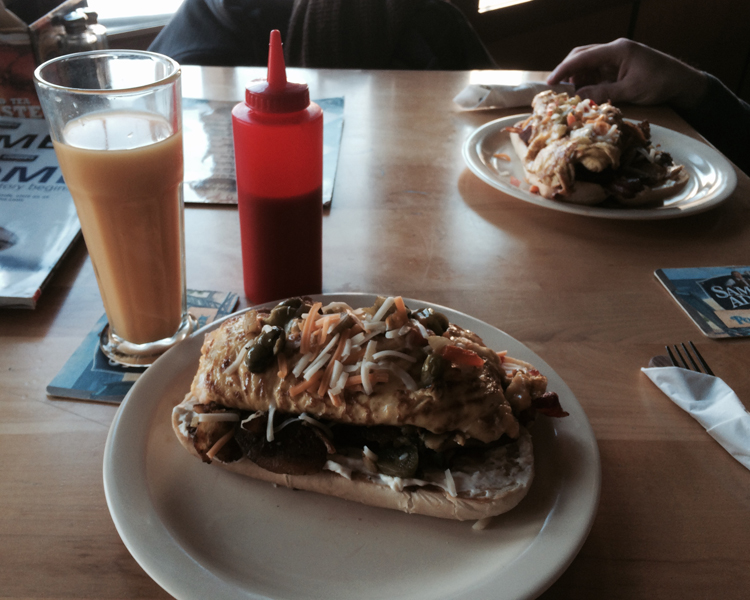 To aid us in this taxing ordeal, we both sought “The Cure,” which is a massive French bread breakfast sandwich complete with a gigantic cheese omelet, bacon, a spiced beef sausage, jalapenos, American fries, more cheese, and Giardiniera. God damn, it was great, but it occupied valuable belly real estate meant for mimosas. Somehow, we still managed to take down five pints of mimosa apiece by 12:34 p.m., despite gestating healthy second trimester food babies. Around that point, the first (and only) minor wave of customers came in. The lunch rush was six guys who were in and out within 45 minutes, a couple who sat a few tables away, three guys who dined alone at the bar, and us, the two liquored-up weirdos from breakfast who were still doing some mimosa thing for whatever reason.

As we labored through drinks usually equated with luxury, Josh and I—relative strangers, mind you—spoke at length about stand-up comedy, the perceptions of Milwaukee he (a native) and I (a transplant) had, love, our families, and, mostly, how much drinking mimosas was beginning to suck. At seven pints each, we were granted an unexpected reprieve from the exceedingly arduous task of putting liquid into our bodies, as we were told we drank all their orange juice. The owner went to get more. As we waited, it was almost as if we’d become just another part of the restaurant’s interior decor. The bored staff swept floors and wiped down tables around us, hauled in deliveries, turned up the abysmal Dave Matthews- and Smashmouth-heavy music mix a few notches higher and conversed behind the bar. To ward off the growing (and admittedly accurate) feeling we were basically loitering at this point, we ordered an appetizer combo to share. As we waited for our order, the person who went out to fetch more OJ returned and seemed less-than-pleased to find us still sitting there.

By the time our appetizer platter arrived, it was about 2:30 p.m. and we were deep into our eighth mimosas. The juice delay, combined with concentrated citrus-induced heartburn and prolonged intoxication while running on less than 180 minutes of sleep, threatened to derail my progress. Leanner—who was either just being a great actress/server or was now thoroughly entertained by the visibly miserable guys meekly chewing seasoned fries and rib tips while looking vacantly at the same segment of Second Street they had been intermittently since 10:15 a.m. in the morning—asked if we wanted another round. With double digits in our grasp, we reluctantly said yes. When our wonderful server returned with our refill, she also brought news from her boss that this would be our final mimosa under the all-you-can-drink umbrella. We’d officially found the bottom of bottomless mimosas at Ashley’s Que, only needing over five hours and a combined 18 drinks for $40 (which would’ve been $108 total if sold individually) to do so.

If we didn’t already feel bad about pushing a very, very good restaurant’s deal too far (even if it was a freezing Tuesday during an otherwise dead day shift), I would’ve questioned Ashley’s use of the word “bottomless,” or simply ponied up $6 to get to number 10. But, really, I was relieved for it to be over. Leanner told us nobody had ever stayed this long before…and that Ashley’s all-you-can-drink policy was going to be changed. I tipped her what Josh and I felt to be a more-than generous amount for the weird experiment she had helped us conduct, and we boarded our separate modes of transport back home (where I proceeded to try opening my front door with my car key).

By wanting to elevate and extend one of life’s finer things to the next level, I realized that maybe there’s a reason brunch is usually relegated to only a few hours on the weekend. Maybe humanity just isn’t equipped to handle an existence composed entirely of great things. If not for the unforgiving winter, the warm summer breeze wouldn’t feel quite as nice. Surely, even Utopia would eventually begin to resemble purgatory with each conflict-free day spent suspended in a sort of heavenly loop. But more than anything, I think I just had too much orange juice and started feeling shitty. 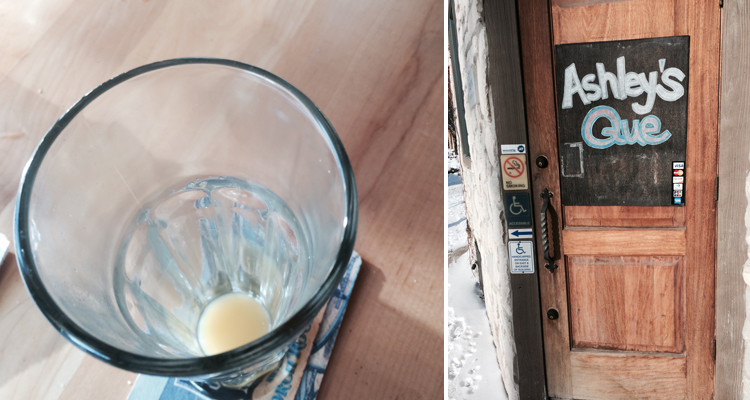