Down on Howell Avenue at the edge of Bay View between Humboldt Park and Gold Rush Chicken sits a small, nondescript building called MKE MindBody Wellness. Other than maybe noticing that its sign kind of looks like a sphincter, it’s probably a place many of you have passed countless times without ever noticing. Despite its limited square footage and muted exterior, this semi-secluded business offers a variety of holistic medical services. Among the litany of treatments offered include acupuncture, reiki, nutrition counseling, aromatherapy, health coaching, massage therapy, restorative yoga, meditation, and treatment in the facility’s Far Infrared Sauna.

Having already tried many of these for past columns or on my own time (who would ever want to read about the time I got a massage?!), I decided an especially chilly late November afternoon would be the perfect occasion to warm my body and open my mind by finally seeing what this Infrared Sauna stuff was really about. Over the past year, I’ve read or heard people extol the apparent benefits of this unconventional treatment option. Take from this what you will, but Mark Duplass—who, love or hate his work, is extremely productive and energetic—and the oft-referenced comedian Pete Holmes both swear by Infrared Saunas, and each have a unit in their home. Additionally, I’ve read a number of accounts about the physical and emotional benefits this treatment brought others. Plus, I figured that (unlike my regrettable trip to the suburbs to sit in a makeshift salt cave and get nothing but a runny nose) even if the experience didn’t live up to the hype, I’d still get to relax in some variation of a sauna in autumn. 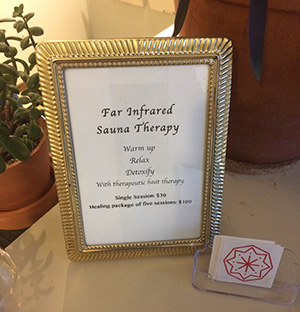 I recently registered for an appointment on MKE MindBody’s website, which also instructed customers to bring shorts and a change of clothing. This week, I finally entered the business I’d driven past dozens upon dozens of times without a second glance (except, again, to take notice of the sign’s faint resemblance to a butthole). I checked in, signed a waiver, paid $30 ($100 packages for five appointments are also available) and was lead to the small chamber in a private room that would be mine for the next hour.

Within the three-to-five minutes in the lobby before my appointment, I was told that I had the room for 60 minutes, but that my first time in the sauna should only last between 20 and 30 minutes, depending on my comfort level. Once in the room, I locked the door, undressed, turned off the lights, and took a look at this heated device I’d heard so much about. 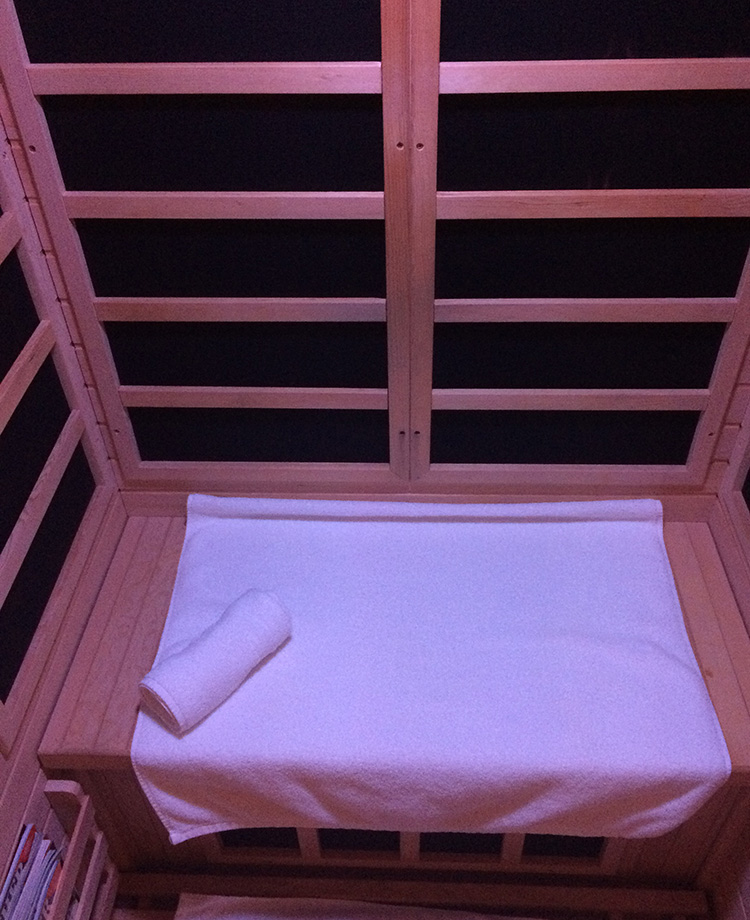 The glass door gave way to a chamber that was probably four feet wide, three feet deep, and five feet high. There were towels on the wood slats, magazines to read (if Mother Earth News is your bag), and a gauge to let you know exactly how hot it was inside and how long you’d been in there. It read 138 degrees. I sat down and hoped that by the end of my hour, the various alleged health benefits would literally radiate through me.

What are those benefits? Apparently, Far Infrared Sauna therapy uses light rays to penetrate the skin and heat blood vessels, tissues, and muscle. The temperature (usually 90-145 degrees) is significantly less than traditional saunas, and there’s no steam or vapor. As they say in Arizona, “It’s a dry heat.” The therapy is said to help detoxify and make fats, oils, and other toxins “melt” from your skin. The practice apparently increases one’s heart rate, promoting heart health and allowing for calories to be burned. It can aid in relaxation and sleep, while reducing stress. It can kill microbes in your body and sooth ailing muscles or joints. And, especially relevant for this trip at the tail end of fall when daylight and warmth are at a minimum, extended exposure can apparently combat Seasonal Affective Disorder. Who knew sitting still could accomplish so much?

Seated in the chamber, I waited for some…any of those things to occur. The lack of humidity made this far more tolerable than traditional saunas. At first, I didn’t know what to do. Within a few minutes, the answer became clear to me: just sit there and sweat. Perspiration started beading on my forehead, then my arms, then down my back, then everywhere. By the 15-minute mark, I was saturated. Sweat pooled beneath me, dripped off my beard, and collected at my fingertips. As I passed the recommended 20-minute mark, any movements I made produced a sloshing sound. I’ve never sweat more in my life.

As disgusting as that sounds (and was!), it felt as if it was actually helping me. I was getting rid of all the grossness that had accumulated within me over Thanksgiving weekend and the preceding weeks of inactivity. Though confined in an chamber and taking in infrared rays from a synthetic source, I felt fully warm and revived for the first time since summer. Like many other wellness experiences I’d tried, I also liked that this gave me a chance to be somewhere without my phone, without emails, and with nothing to do but be present in a situation for a specific amount of time. Thirty minutes passed, but I wanted to stay in there to push the limits of this treatment and to delay my reentry into the cold darkness outside this room. In total, I managed to stay in there 47 minutes. Next time, I’ll stay the full hour.

While, I drank the cup of water I was given, I felt drained but energetic. It was like a runner’s high or something. My internal and emotional chill had evaporated. In truth, I can’t say exactly what I actually got out of Infrared Sauna therapy, but I found the experience to be relaxing, reflective, and something that brought a temporary sense of warmth, comfort, and renewal during a dark, cold, and trying time of year. That was enough. Anything else that might come is just a bonus. 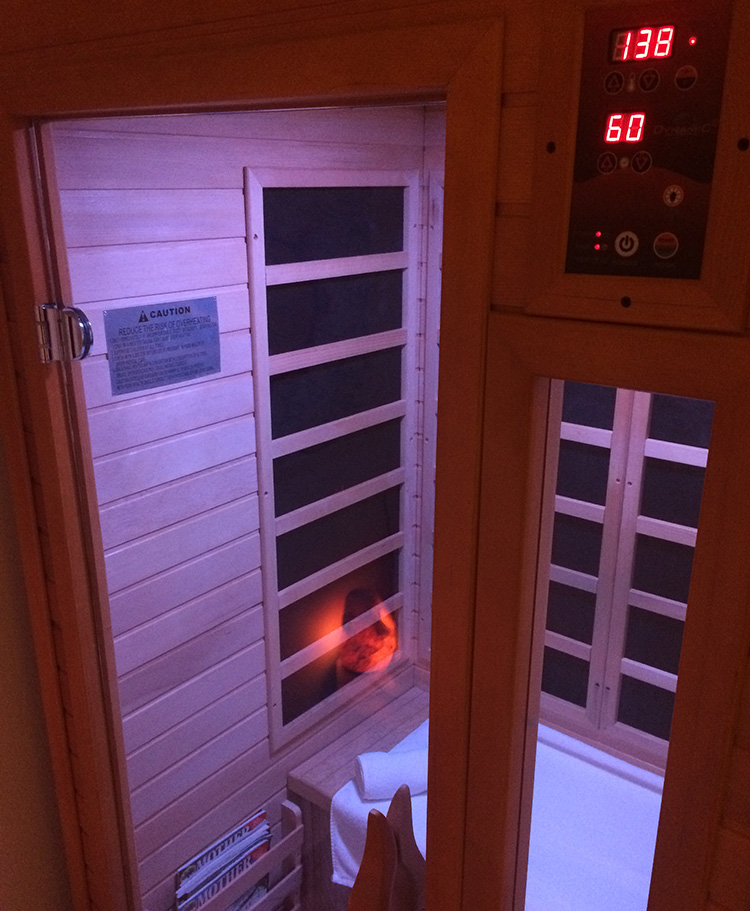