Every Wednesday at noon, Ryan Schleicher, Evan Rytlewski, and Matt Wild take to the WMSE airwaves to discuss all things Milwaukee. This half-hour fun-fest is called The Disclaimer, so named because none of the oft-ridiculous views expressed on the show necessarily reflect the views of the hosts’ employers. Milwaukee music, Milwaukee art, Milwaukee events, and D.I.Y. lawn care tips are frequently discussed—and rarely agreed upon. The Disclaimer: talk radio for the sane.

Back in June 2016, Postman’s Square—a triangular “pocket park” located between W. Wells Street, N. Plankinton Avenue, and N. 2nd Street—was given a much-ballyhooed overall. The fun-lovin’ social architects at NEWaukee chose the oft-overlooked space as the site of their latest “placemaking” endeavor, giving it a new name (Postman’s Plot) and bedazzling it with a bunch of blue lawn furniture meant to evoke the park’s ties to the founding of the postal union in 1889. Per usual, the mayor showed up for a ribbon-cutting ceremony, NEWaukee yakked about “connectivity” and “activating space,” and local media outlets soiled themselves in excitement.

Fast forward to earlier this week: In an op-ed published on Urban Milwaukee, UW-Milwaukee film professor Dick Blau calls the Postman’s Plot facelift a “huge mistake.” “Instead of creating a pleasant and democratic meeting place,” Blau writes, “the organizers of this project succeeded in making it inhospitable to all.” Later, he get to the heart of the matter:

I think we need to be very careful about adding such “public art” to our present urban fabric. I think we need to be more discriminating, not less, when it comes to enthusiastic proposals for filling up the space around us, usually with stuff that doesn’t deserve to be there in the first place. The fact of the matter is that Milwaukee no longer needs to prove that we are a hip and arty place. The city is becoming such a place organically, through the countless developments, new bars, restaurants, increased density and new energy transforming so many neighborhoods. Overlaying all this with “public art” initiatives like the one in Postman’s Plot may look like an easy win, but they don’t wear very well. And, once installed, these cheap effects tend to linger on—and to degrade—the very public sphere they were meant to improve.

Never ones to pass up a good NEWaukee story, Ryan, Evan, and Matt weigh in on the Postman’s Plot dilemma. The chat is preceded by Matt’s recap of last week’s MilMag Live! event, and followed by the group’s thoughts on Mayor Tom Barrett’s planned “charm offensive” for the city of Milwaukee. 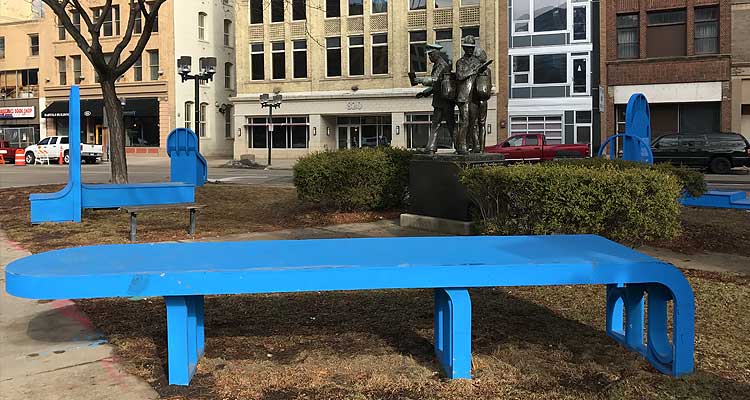 [UPDATE: An “In Defense of Postman’s Plot” op-ed, written by NEWaukee’s Jeremy Fojut, has since been published on Urban Milwaukee.]