A school wins a pizza party. What could go wrong?

Oh, where to begin. In Pizza Party! the latest production from Milwaukee’s Highland Community Players, it may be easier to list the things that don’t go wrong. This is a play that begins with some (seemingly) innocent ‘za, but quickly descends into a quagmire of conspiracy theories, junk science, bad-faith arguments, and the dastardly deeds of a video game superstar. A wrestler-turned-politician and some ill-advised dabbing are also involved.

“It’s very lively,” says Highland Community School 5th grader Mia Christensen. “I honestly just love being up there with everyone.” 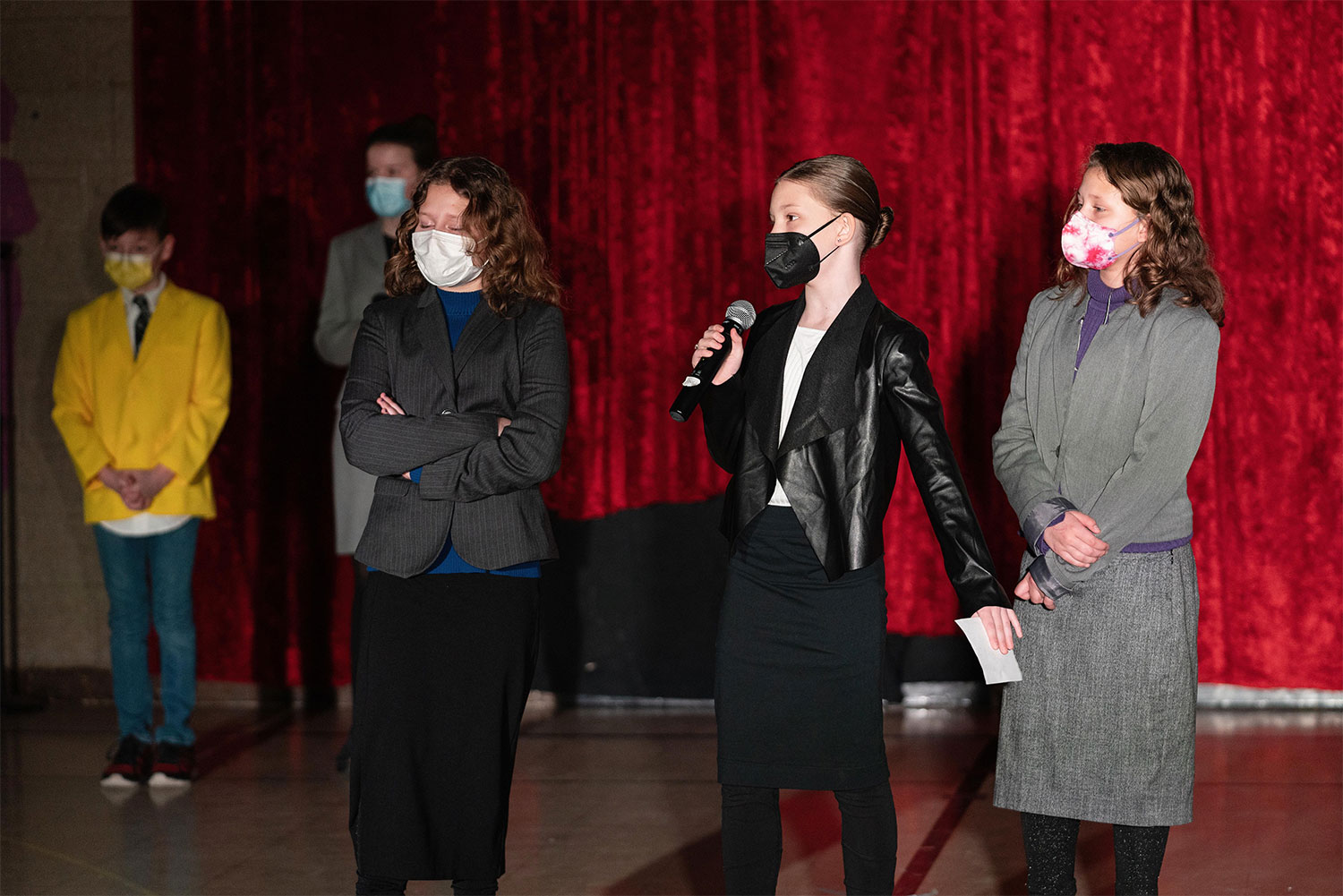 Pizza Party! is the work of Highland Community School Performing Arts Director Barry Weber. Weber has been writing and staging increasingly heady plays for the parent-directed Montessori school since 2009. Past productions have taken inspiration from filmmakers like David Lynch, retro television game shows like Double Dare, and hot-button topics like corporate greenwashing. With his newest production, Weber roundly spoofs our country’s current battle with mis/disinformation.

“My thought was to do a play on the messiness of democracy, and how a very vocal minority acting in bad faith can make controversial something that was never controversial before,” Weber explains. 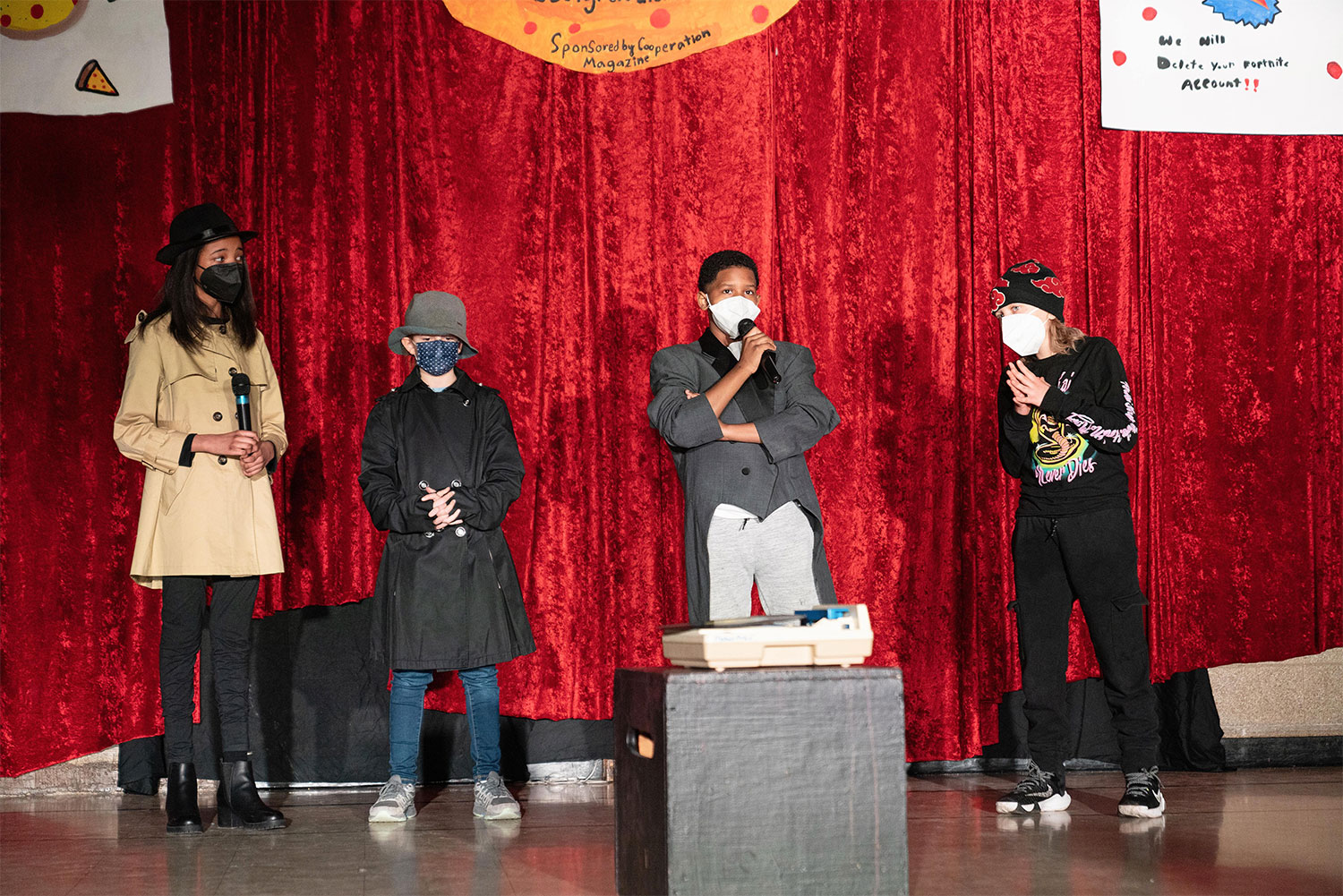 The story, in brief: After an elementary school wins a pizza party, a group of anti-pizza crusaders known as CARP (Citizens Against Rotten Pizza) demand a pizza-free option. Things quickly spiral out of control: A website called GeometryIsFake.org spins anti-pizza conspiracy theories (the slices are triangles, you see). A group of YouTube “Truth Detectives” finds insidious connections between pizza and other “zz” menaces (jazz, mozzarella, etc.). A podcast called “Yo! We’re Doctors” encourages its listeners to do their own research on pizza-related burnt mouths. Is there a connection between Mario’s Pizza and the turtle-stomping video game character of the same name? And what about that word, “pizza”? Wouldn’t “saucy pie” be more appropriate? It all comes to a boil before ending on a twist so offhand and benign that it feels like a cosmic joke. Douglas Adams would be proud.

“My hope is that there are some lessons that kids can pick up on as they get older, seeing examples of outright denial of reality, or the embracing of conspiracies,” Weber says. 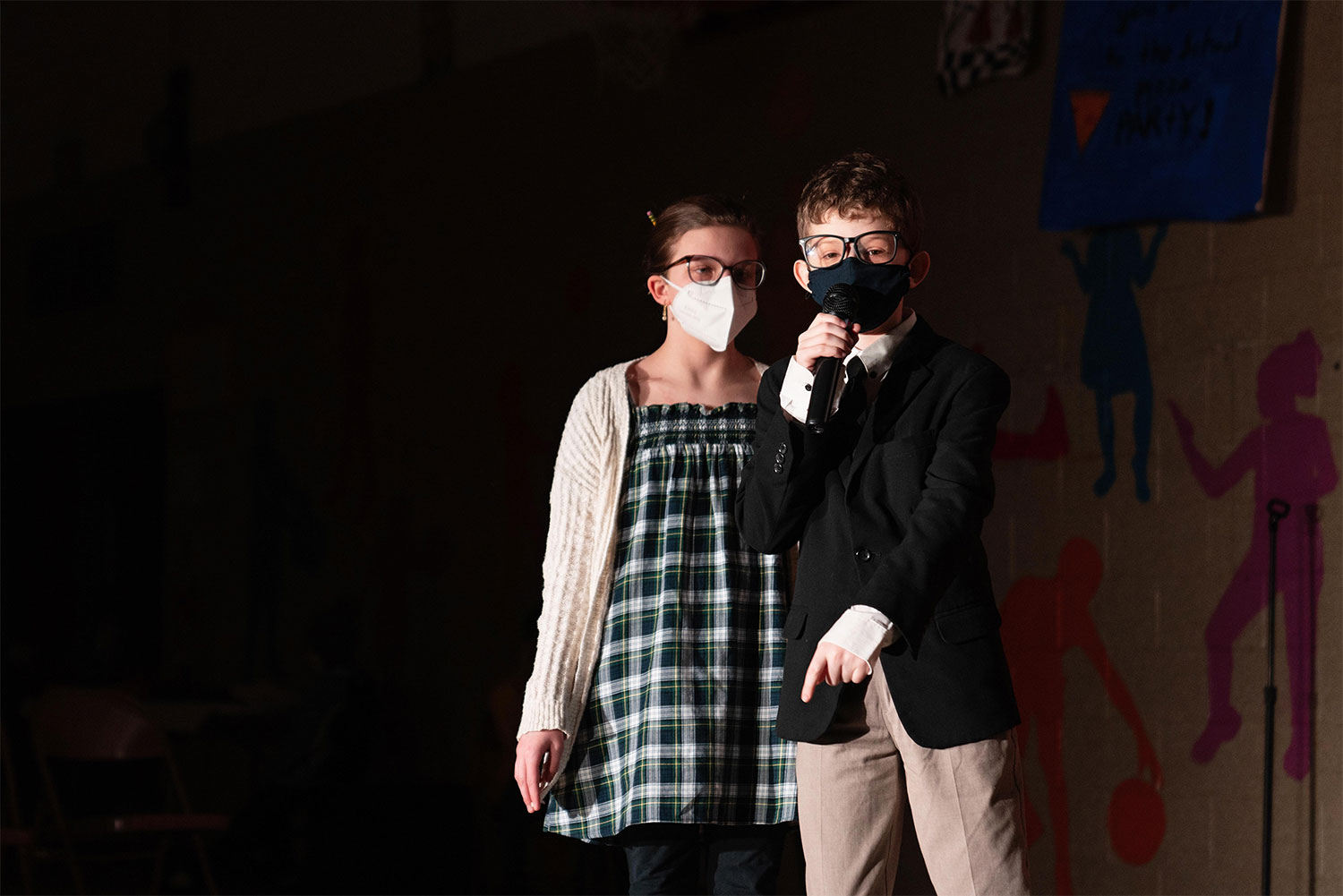 Pizza Party! follows in the footsteps of Weber’s past Highland plays, but its timing is unique. The COVID-19 pandemic and the suspension of in-person learning throughout Milwaukee Public Schools forced the 2021 production to take the form of a socially distant movie. Students met online and shot individual scenes outdoors with scene partners. Milwaukee filmmaker Jenny Plevin assembled the footage into a film called Blue Light Special. Though it was a creative and successful workaround, Weber and his cast are happy to be back in person, hashing things out together in Highland’s gymnasium.

“It feels really amazing,” says 5th grader Nolin Fair, who plays one of the “Yo! We’re Doctors” hosts. “You get to interact with people. You get to do an actual play. You get to express how good of an actor you are. It just feels good.” 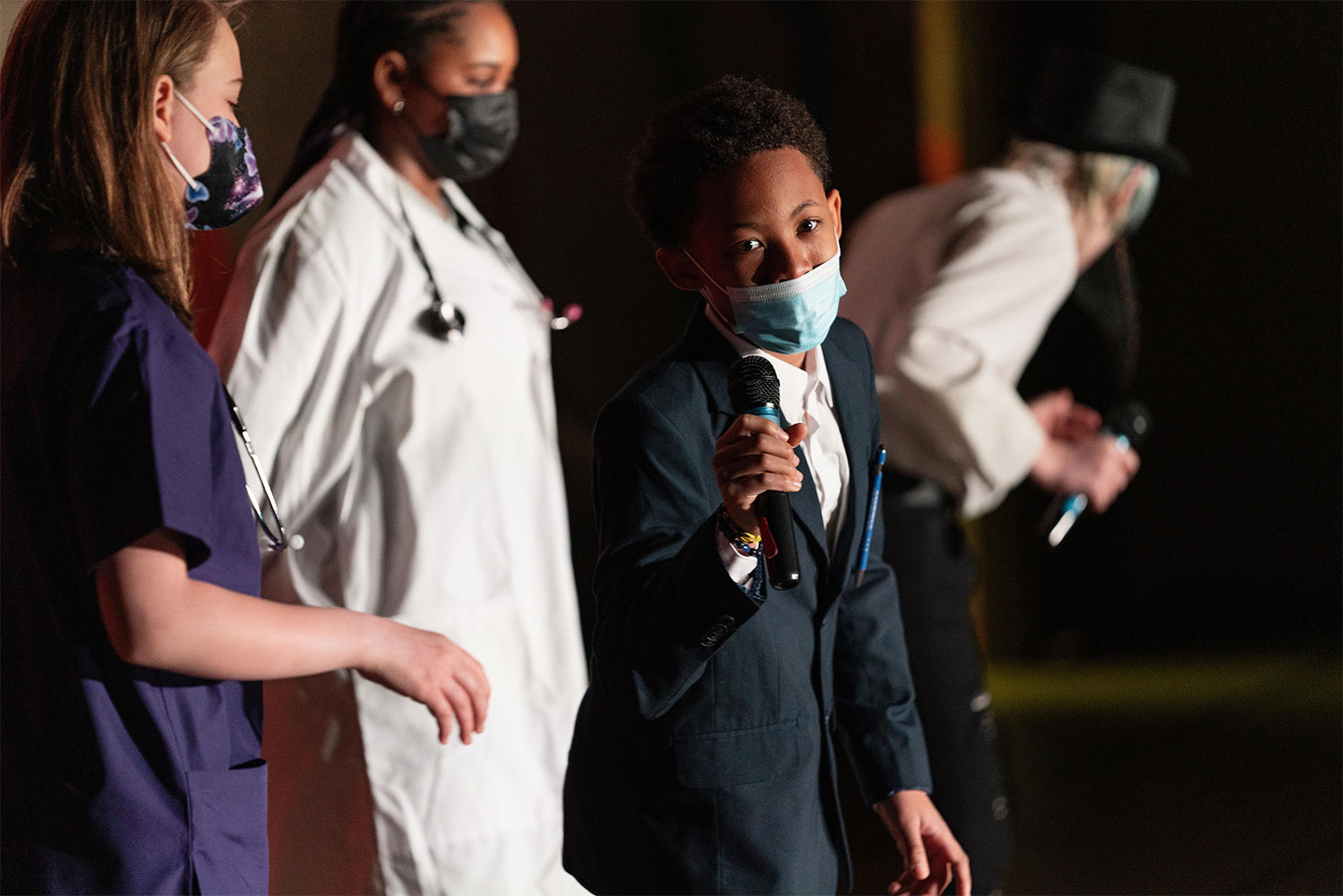 Still, this year’s production faced numerous pandemic hurdles. Early rehearsals were canceled after Weber tested positive for COVID. Masks were—and continue to be—required. Sadly, adults and members of the community won’t be able to see the finished play for themselves; performances are being limited to fellow Highland students.

“It’s very different,” says 5th grader Elsa Johnstone, who plays CARP member Emma Sackler. “I was very sad that we aren’t allowed to have adults come in and watch us, but I’m glad that we’re able to do it for our school.”

Weber agrees. “Even with masks on and all that, it’s just really great to see everybody in the shared experience again,” he says. 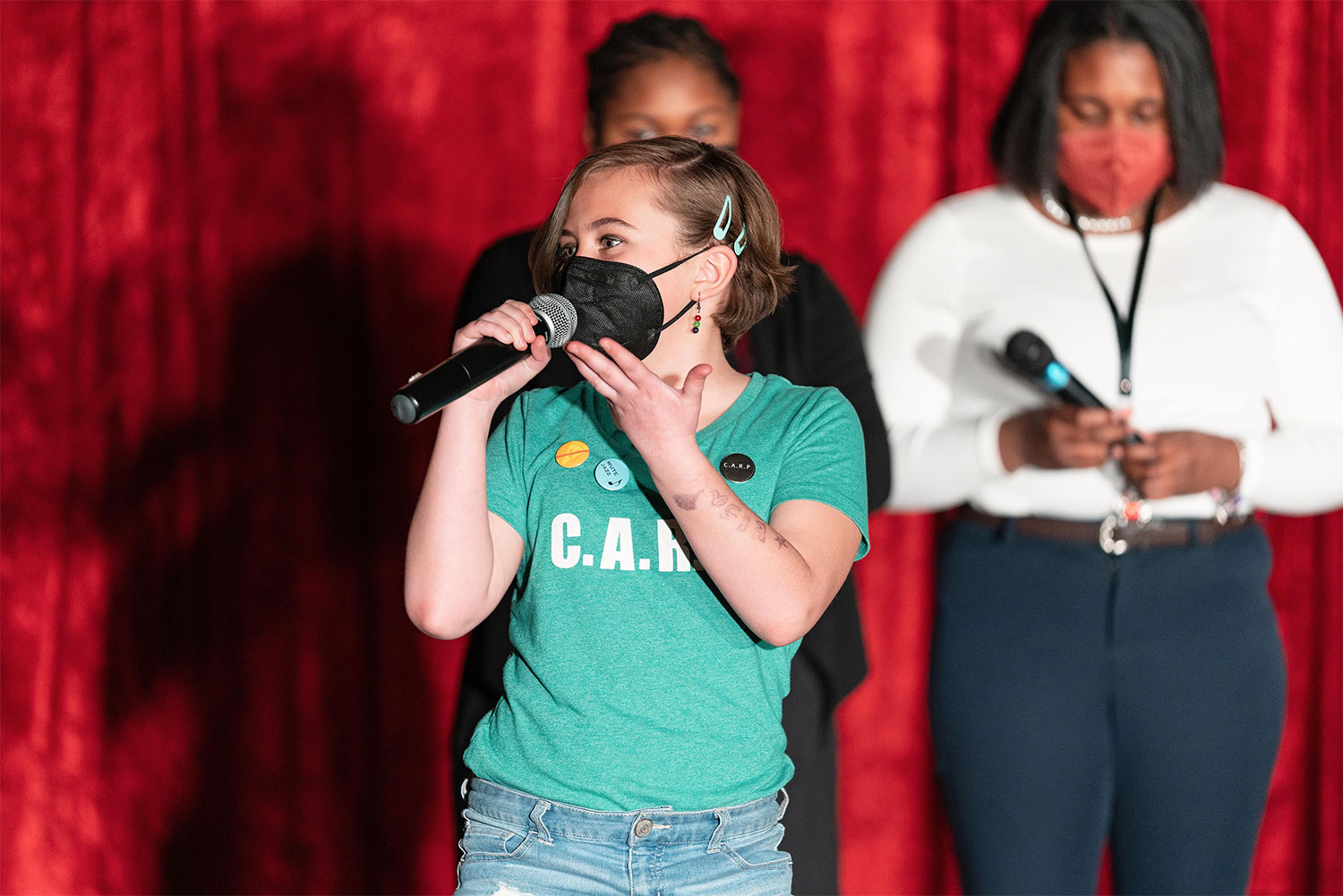 Beyond its subject matter and its place in pandemic history, Pizza Party! is notable for simply getting back to what Weber does best: creating unique, entertaining plays with substantial roles for everyone in the cast. Crowd participation is a must. Things get loud. Things get goofy. Big themes are floated, but the focus remains on fun.

“I did a lot of plays as a kid,” Weber says, “and it’s not like I look back and think, ‘Oh, The Crucible is such a classic! What an honor to have been part of Arthur Miller’s great commentary on the Salem Witch Trials and how they relate to McCarthyism!’ I never really thought that way and I still don’t. It’s more like ‘Hey, that provided me the avenue to do something fun with my friends.’ I think with the kids, that’s what it’s still about.” 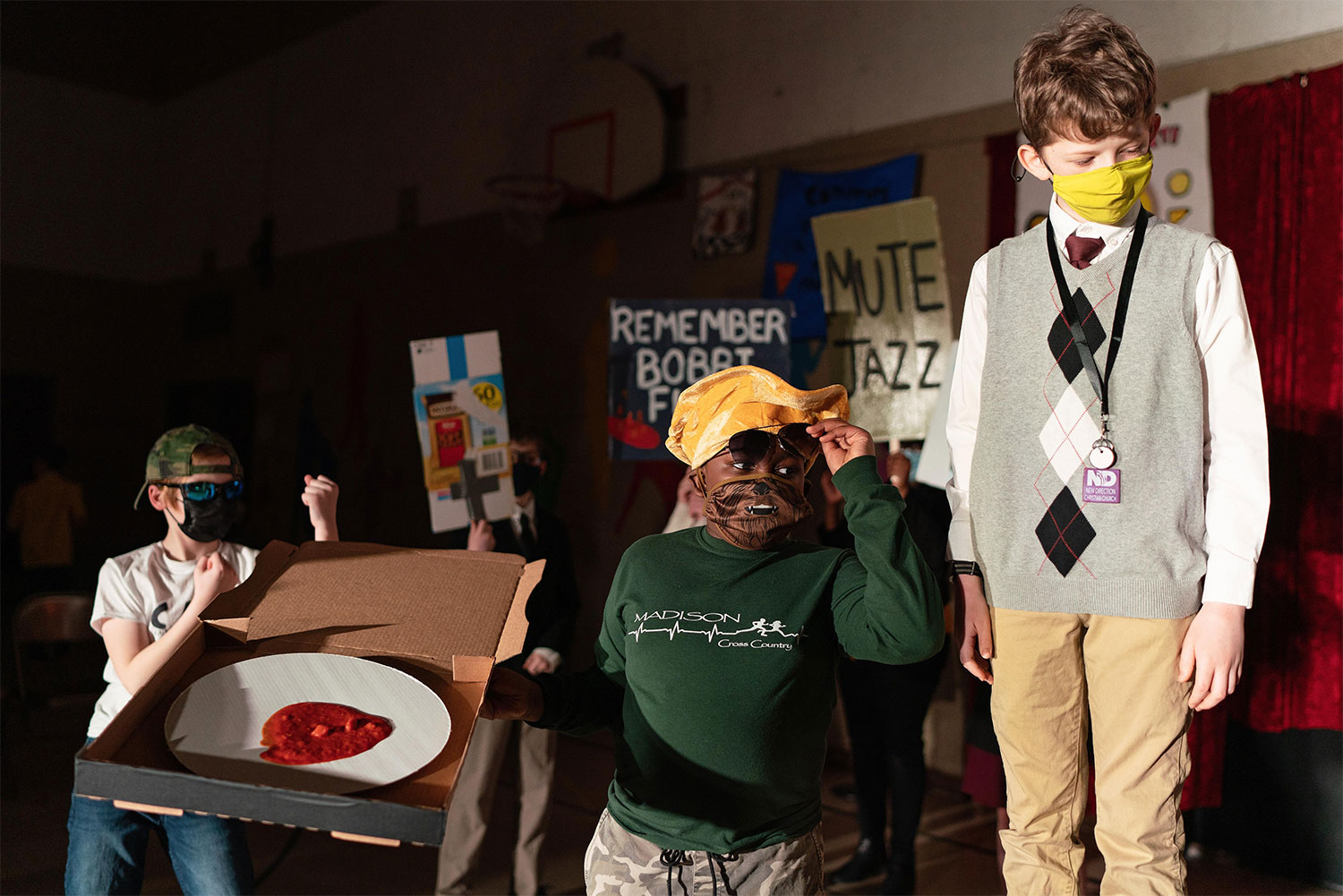 “This is the first play I’ve done,” says Willow White, who plays crowd member Sam. “I didn’t actually know it would be this fun. There are a lot of people I’ve met. I’ve made a lot of new friends during this play.

“Like you!” she adds, looking at a new friend. Both girls smile and burst into laughter. 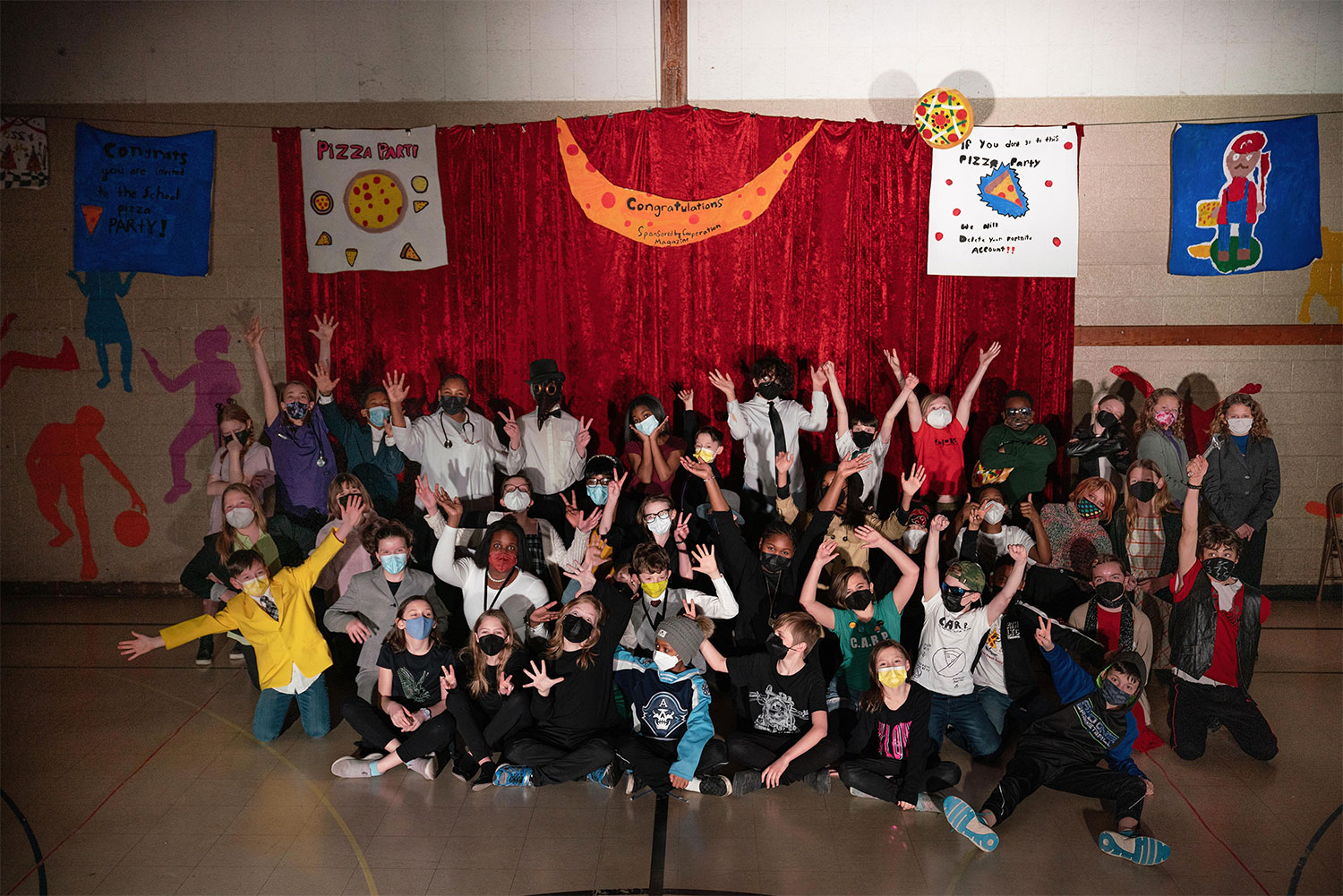 • Cast, crew, and crowd get messy in Nickelodeon game show-inspired ‘Winnerz Take All’