It’s a Saturday morning and a local theater group is running through a nightmarish dream sequence torn straight from the (secret diary) pages of seminal ’90s TV series Twin Peaks. A little person in a red suit twitches across the stage and speaks in a strange, backwards-sounding voice. A straight-laced detective stares in horror as a demented chorus framed by red velvet curtains chants “How dreary to be somebody” over and over again. The soft and mysterious score of Peaks gives way to the droning and menacing music of the series’ feature-film prequel Fire Walk With Me. A smoke machine spews forth from beneath the stage. A strobe light flickers. A convoluted case of identity, ambition, and the darkness lurking beneath the manicured lawns of Middle America reaches its thrilling and ambiguous conclusion.

Later, lead actress Maeve Haley muses on the production’s myriad references to Twin Peaks, as well as its debt to the twisted and singular vision of the show’s co-creator, David Lynch. “I haven’t seen Twin Peaks,” she says, “but my parents are thinking of letting me watch it.”

Welcome to Judy Plays With Fire, a new play being mounted by the Highland Community Players—a theater group of 4th, 5th, and 6th graders from Milwaukee’s west side. Premiering Wednesday, March 11 and closing Friday, March 13 in the Highland Community School gymnasium, it’s a production that comes tantalizingly close to answering a long-standing question: What was David Lynch like as a nine-year-old?

Judy is written and directed by Highland drama coordinator Barry Weber, a fan of not only Lynch and Twin Peaks, but of challenging students and audiences alike with unconventional productions that are light-years removed from normal kiddie fare. Past productions have been set in dystopian cyberpunk futures rife with political intrigue (2014’s ZERO), as well as post-apocalyptic landscapes infested with zombies (2010’s Gwar-inspired Penguin Attack!)

“I want to make sure that when I write the scripts there are no ‘trees,’” Weber says, referencing grade school plays that often give students thankless roles as inanimate objects. “I want to write the kind of plays that as a kid I would have really wanted to do. I certainly didn’t know who David Lynch was when I was a kid, but I’m sure I would have really enjoyed it.” 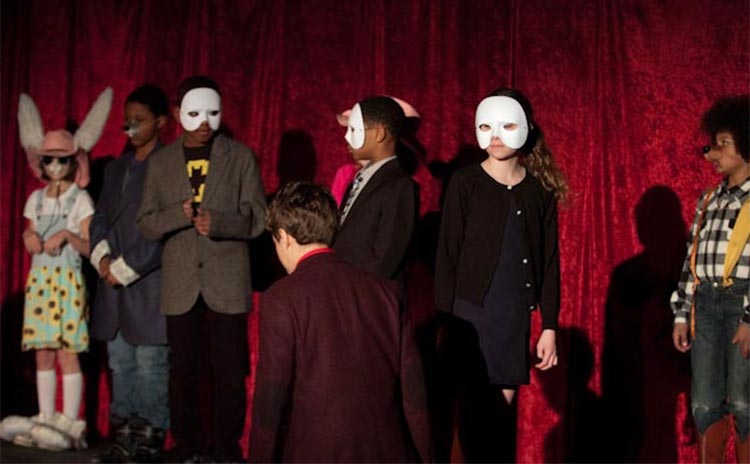 Judy Plays With Fire takes place in the aggressively average town of Centerville (“The most normal place in America!”) and revolves around the disappearance of one Judy Carpenter. Two detectives are dispatched to locate the missing girl, only to find themselves embroiled in a mystery filled with shady characters, shadier motivations, and surreal dream worlds that transform the makeshift stage in Highland’s gym into a kid-sized version of Twin Peaks’ infamous Red Room. Beyond Weber’s direction, the production—both onstage and off—is entirely in the hands of students.

For diehard Lynch fans, the play offers a constant stream of sly nods to the director’s works. A dream denizen sings Nina Simone’s “Don’t Let Me Be Misunderstood” into an LED wand, a la Dean Stockwell singing Roy Orbison’s “In Dreams” in Blue Velvet. Another character in a rabbit costume brings to mind Lynch’s Rabbits short films from the early ’00s and their appearance in 2006’s Inland Empire. An elderly couple obsessed with feeding grass clippings to the town’s geese are named Mr. and Mrs. MacLachlan. The title of the play itself is a double reference to Twin Peaks’ frequent fire allusions and to the unexplained David Bowie character in Fire Walk With Me. (“I’m not going to talk about Judy. In fact, we’re not going to talk about Judy at all…”)

While far from a straight Peaks adaptation (it’s more of a David Lynch mash-up), Judy has plenty of characters that will be recognizable to series fans. The Log Lady becomes Slinky Boy, a mysterious figure dressed in a metallic outfit and prone to making proclamations like “My Slinky has a message for you!” Triple-crossing Great Northern baron Ben Horne becomes Mr. Frost (a nod to Peaks co-creator Mark Frost), the duplicitous owner of an ice cream parlor complete with a Chuck E. Cheese-inspired animatronic band (played by students dressed in animal costumes and tutus). The heroic and pie-obsessed FBI agent Dale Cooper, meanwhile, becomes Dana Andrews, who demonstrates her preternatural detective skills not by intuiting a killer’s identity via the Tibetan rock-throwing technique, but by finding a townsperson’s missing pen and sniffing out a counterfeit Pokémon card.

Befitting a cast of preteens with varying levels of experience, the dialogue in Judy can be rushed and the story difficult to follow. (The entire production clocks in at roughly 45 minutes.) Still, it’s great fun watching the students tackle such challenging material with equal doses of humor and aplomb, and even greater fun picking out the naturally gifted actors of the bunch. In the case of Judy, Haley is terrific as the inquisitive Cooper surrogate, though diminutive CJ Young steals the show as the scheming Mr. Frost. Whether he’s barking orders to his flunkies or lording over his animatronic house band, Young—who had to take time off from acting two years ago due to conflicts with basketball practice—imbues his character with a surprising amount of gravitas and menace. 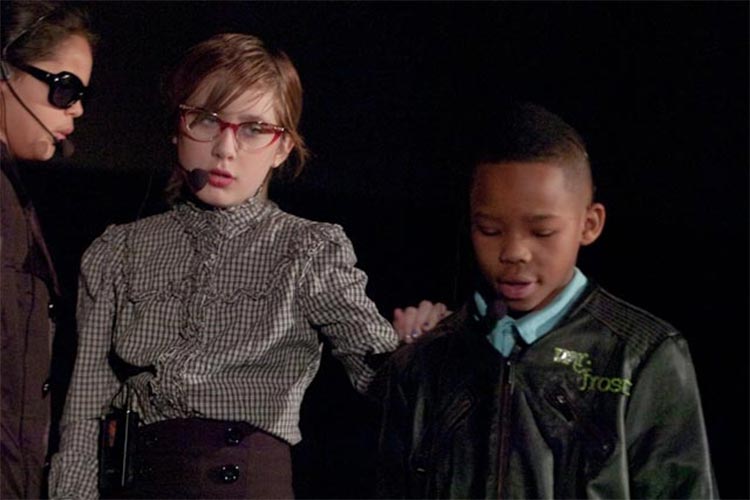 Weber says that while the majority of the students are unfamiliar with Lynch and Peaks, they appreciate the play’s surreal qualities. (Weber did screen the Red Room sequence for select actors; they found it hilarious.) “Lynch tends to deal with very grim and adult content, but his style can be very kid-friendly,” he says. “With kids at this level, their imaginations are taking off. They may not know the term ‘phantasmagoria,’ but they like the idea of everything being a dream.”

In Twin Peaks, Agent Cooper received a cryptic dream message that became one of the show’s signature lines: “The owls are not what they seem.” The same could be said of the Highland Community Players and the talented students who bring Judy Plays With Fire to life. Now, if only mom and dad would let them watch the source material.