Last week, a new era dawned upon Milwaukee’s Comedy Cafe. Though it was “consistently rated as one of the best comedy clubs in the country for two decades” (source: a Shepherd Express print ad that gave no attribution to the claim), the city’s default best comedy club recently moved out of the respectably-sized and high-visibility digs at 615 E. Brady Street it had inhabited for 27 years and receded into a smaller, nondescript second floor laugh loft located above an “upscale sports lounge” called Tutto on Old World Third Street. Despite being a quiet couple-mile relocation at its root, Comedy Cafe’s downshift—no doubt the direct result of poor booking—in the midst of a stand-up comedy boom is a huge hit to comedy fans in town, a detriment to homegrown comedians, and a widening of the already staggering comedy chasm that sits between club- and theater-level comedians who come to Milwaukee. Events occurring above an upscale sports lounge notwithstanding, the city, in essence, is now without a true, dedicated comedy club—a huge detriment for a place Milwaukee’s size.

If you read Milwaukee Record’s comedy coverage with any regularity, you’re surely aware that Milwaukee has an undeniably talented and motivated batch of local comedians spreading their humor to every vacant nook of the city in a variety of interesting and innovative ways. This year alone found a Milwaukee comic performing on the Late Show With David Letterman, another winning an HBO-presented comedy contest, and various others taking their Milwaukee-sired talent to the comedy trinity of New York, Los Angeles, and Chicago. Similarly, you’ve likely seen show announcements and routine reviews for some of stand-up’s top-tier touring talents at packed ballrooms and theaters in town. Back in April, Kevin Hart performed six sold-out shows at 2,500-capacity Riverside Theater over the course of three nights—six months removed from Dave Chappelle doing a half-dozen sold-out shows at 1,300-cap Pabst Theater. For going on nine years now, Jim Gaffigan has celebrated each holiday season with a well-attended residency at the Pabst. It’s no longer unusual for comics to decide to film hour specials in our venues, and at this point, it’s a legitimate shock if the Louis CKs, Aziz Ansaris, Amy Schumers, Bill Burrs, and Jerry Seinfelds of the world decided to tour the country without stopping in Milwaukee.

It’s by no means a generous statement to allege that Milwaukee is a comedy town, as the city boasts both a formidable, locally-sourced base and enough interest to regularly play host to a once-unthinkably-high echelon of national and international humorists, given the city’s size. Yet with a bevy of under-performing and less-than-reputable clubs, a sour, hollow, and tremendously disappointing middle languishes lifelessly between the DIY showcases in bars and sellout theater or arena sets. In most markets Milwaukee’s size, that middle is filled by comedy clubs.

A relic of the 1980s comedy boom, clubs in all their “two-drink minimum” glory have long served as a low-risk destination for dates, employee hangouts, and weekend fail-safe stops when other plans go awry. Customers would buy tickets with little or no background on the performers, trusting they’d see a base and identifiable set with interchangeable movie titles and technology devices swapped out to keep the aged act timely enough to be deemed “funny” across most demographic boards. It’s the comedy equivalent of paying to get into a bar to see a cover band that plays all the hits. However, with the advent of YouTube, Twitter, podcasts, and a heft of other promotional tools, it has become increasingly easy for audiences to gain awareness of lesser-known comics who are blowing through town for three nights. Instead of serving as places to see some comedy (any comedy!), many clubs across the country—and right here in Wisconsin—have become proving grounds for up-and-coming comics to test their material and cultivate regional followings en route to, hopefully, playing larger rooms. Comedy Cafe didn’t get that memo.

Really, it appears none of the comedy clubs in Milwaukee did. Save for the all-too-seldom one-nighter from past-prime performers like Pauly Shore and Eddie Griffin, Silk Exotic basement tenant Jokerz has abysmal booking and even worse social media presence. Despite Potawatomi’s ability to get legendary performers like Don Rickles (performing there tonight and tomorrow!) and Norm Macdonald/Kevin Nealon (August 22) on its Northern Lights Theater stage, the casino’s Bonkerz Comedy Club doesn’t elicit too much in the way of recognizable names. The Lucky Rabbit in Waukesha does a better job touting its pizza than its comedic offerings. Meanwhile, Madison-based Comedy Club On State has become a frequent stop for notable talents like Doug Benson (who has performed once in Milwaukee this decade, compared to more than a dozen shows and live podcast recordings in Madison during that span), the Sklar Brothers (who last performed in Milwaukee about five years ago when opening for Chelsea Handler), Pete Holmes (whose Turner Hall show was cancelled due to low ticket sales), and Todd Glass (who hasn’t attempted to perform in Milwaukee in a non-opener capacity).

Though Silicon Valley actor T.J. Miller has vastly outgrown Skyline Comedy Cafe, he still makes an annual stop at the Appleton club, which he calls his favorite comedy club in the country. Conversely, Miller said he was banned by Comedy Cafe’s former management during his one and only weekend of (post-ban) shows at the fledgling Milwaukee club five years ago. Moshe Kasher (another Madison regular) hasn’t performed in Milwaukee since his run of Cafe shows in December 2011. Until he could comfortably pack Turner Hall last year, Hannibal Buress wasn’t in a hurry to spend any more time in a city with a club he told me had “one of the worst comedy condos in the country” at the time. Besides annual appearances by hilarious Wisconsin ex-pats Shane Mauss and Johnny Beehner, Comedy Cafe seems content to dust off its calendar from the previous year and throw a repeating cast of no-name road dogs under its far-too-bright house lights to perform for patrons enjoying the club’s 2-for-1 shot special (not an ideal promotion for a comedy audience, by the way). To Comedy Cafe’s credit, they have gotten much better about using local comics to host or feature of late, but beyond stage time and inevitable practice of how to handle hecklers, how much could the honor of opening for a guy—the headliner is always a guy, mind you—whose biggest credit was being interviewed on the Bob & Tom Show in one of the Midwest’s most infamous clubs possibly help? 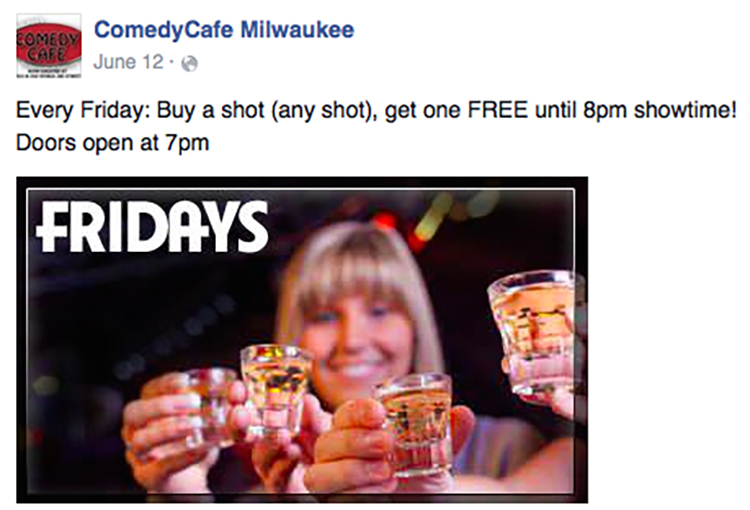 To be honest, the biggest club-level comics to come through Milwaukee in the last five years have seemed to avoid clubs altogether. Nick Thune packed 100 people into a room in the Grand Avenue Mall’s basement, the very same room that played host to Josh Fadem, Johnny Pemberton, and (another begrudging ex-Cafe booking) Nick Vatterott. Doug Stanhope booked Miramar Theatre instead of something more traditional. Neil Hamburger performed at Shank Hall and Cactus Club in recent years, and he’ll appear at Club Garibaldi in September. Twice a month, Caste Of Killers brings outstanding indie comics to their showcase in the basement of Karma Bar And Grill, including Sean White and Rebecca O’Neal. Before dropping by Turner Hall in May, Kyle Kinane (another Appleton and Madison regular) decided to take his material to Shank Hall. W. Kamau Bell also performed at Shank. One commonality each of those shows share is that they all included local openers, an invaluable tool for aspiring stand-ups.

Wanting to avoid speaking on their behalf, I asked a few local comics for their input on the club. Though all those I spoke to agreed with most or all of the above sentiments, the majority didn’t wish to speak on record because they didn’t want to jeopardize the only club opportunity in town, as unsavory as some consider it to be. One comic who had no qualms talking, though, is Ryan Mason. In his short-yet-accomplished comedy career, Mason has opened for such heavy-hitting humorists as John Mulaney, Kumail Nanjiani, Morgan Murphy, and Joe Mande, and he will take the stage before Brian Posehn next month. Of those lofty credits, NONE have occurred in a Milwaukee comedy club, nor as a result from having performed at Comedy Cafe. With ample credits at Comedy Club On State, he says he’s not looking to perform at Comedy Cafe (even going as far to suggest comics “stop wasting time there”) and that the recent move signals a rough road ahead for the longstanding comedy club.

“Honestly, as someone who does not pursue time at that place, I would say that I hold very little hope for their new facility,” Mason says. “I think that the fact that Turner [Hall] is putting on much better shows with in-demand comics at a venue just down the road means that the Cafe is on a death march.”

While it might seem as if this is a long-winded means of unfairly piling on one business, that’s not the intent in the slightest. More so, this is an acknowledgement of a city-wide need for a sturdier connection between local and national talent, a performer-focused space to carefully incubate up-and-coming independent comics in hopes of establishing a long lasting and positive relationship with Milwaukee (instead of prematurely sustaining disappointing ballroom turnouts), and a true blue comedy club. Milwaukee’s Comedy Cafe had the best chance to repair its reputation and realign its priorities to become that place. Now, hidden above a restaurant in a site destined to facilitate hundreds of hack jokes about parking from bottom-barrel comics, it will never be that place. Last week signaled the end of an error for Milwaukee comedy clubs. With Milwaukee’s Comedy Cafe essentially bowing out, who will help the city’s comedy reputation move forward?