In 2017, one day before getting married in Vegas (by the real Elvis, in case you’re wondering), my then-future-husband Brock and I met legendary cartoonist Gilbert Hernandez, his wife Carol Kovinick Hernandez, and their daughter Natalia Hernandez (also a cartoonist) for coffee, a light meal and a group interview. I had not seen or spoken to Gilbert in 20 years.

Gilbert Hernandez and his brothers Jaime and Mario started writing and drawing their magazine Love And Rockets in the early 1980s. It is a legendary publication and still my absolute favorite comic book. Gilbert and Jaime Hernandez were the first cartoonists I interviewed in my journalistic career in Brazil. We talked on the phone in 1996 as they announced that issue number 50 of Love And Rockets would be the last one—and it was, until 2016, when the brothers went back to the original format, currently in number 7. They never stopped making comics, though. To understand the various incarnations of their work check out Fantagraphics’ guide on “How to Read Love And Rockets.”

In 1997 I quit my dream job at MTV Brazil to travel around the United States for two months interviewing my favorite cartoonists. Meeting the Hernandez brothers in person was at the very top of my list. I talked to them at the San Diego Comic Con and then visited their homes in Los Angeles. 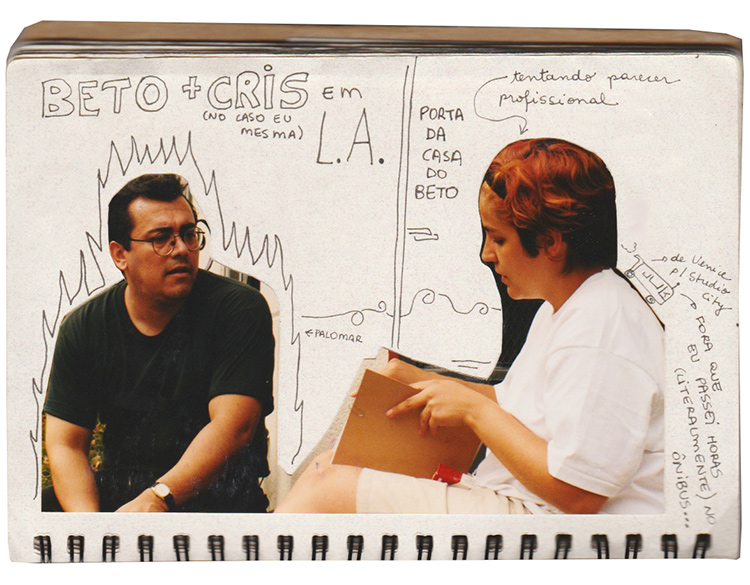 This interview is part of a series of articles in which I revisit the folks I met on that trip. They are available at lionstoothmke.com, the website of the upcoming bookstore I’m starting with Shelly McClone-Carriere in Milwaukee. Gilbert Hernandez has just released his new book Maria M., a complete self-contained graphic novel about the mother of his main heroine Luba. You can buy it online from Lion’s Tooth.

Here’s a sample of part 1 of the interview. Read the whole thing HERE. 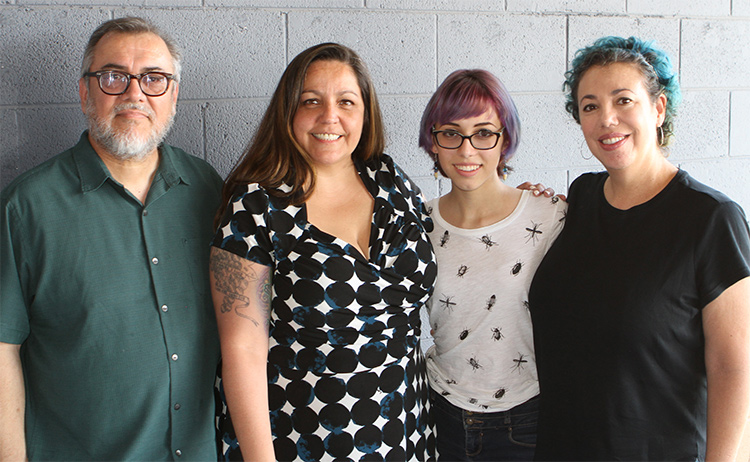 Cris Siqueira: Thinking back to our conversations in the late ’90s. At that point there were very few Latinx alternative cartoonists, and now there are many Latinx comics conventions and artists working in all genres.

Gilbert Hernandez: The ’80s created the indie comic scene, so there’s a freedom now for young people to go and not have to worry about dealing with the big companies or whatever if they have artistic aspirations to comics. That’s great. There are many young people making indie comics. They’re usually personal, the better ones. They don’t even know Love And Rockets because it’s been that many years. They hadn’t been born yet. Now if you like comics and want to draw them, there’s a place where you can get a good start. Even Natalia, if she did comics in the past, there wasn’t always a place for her to put her comics out. We could’ve gone to a convention and sold them, but it would’ve been a little thing. Now people want to see her comics. She draws just as well as a lot of the indie beginners in comics, and these are older people. It’s good that way, it’s really open. Also, Jaime and I are old veterans now. People take us a little more seriously, and that’s nice.

GH: Yes. It’s a weird number, because when I was a kid growing up, 60 meant old. You’re an old man and that’s how it’s going to be now. I suppose it’s true, but I don’t feel it.

CS: How old is Luba now? 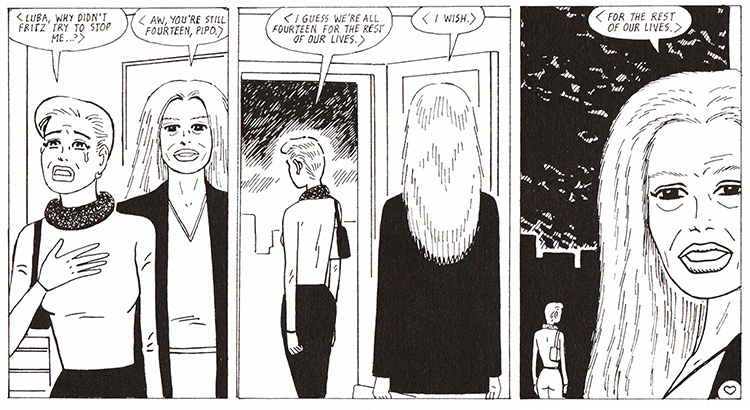 CS: In our first interviews you said you felt like celebrities in conventions and among your cartoonist friends, but then you went back home, and you were all alone. Is that still true?

GH: Yes. I’ve heard writers say that, too. You can go out in the world, you can go to a convention or to a university to speak, which we’ve done often. A convention where everybody really likes your work and they’re all happy to see you. You go to a comic store and if they know who you are, they’re always really nice and this and that, which is great. Then you go home and when it’s time to work, you have to be by yourself. It has to be quiet.

Back in the ’80s, when we first went to England, or the one time we went to England, we had just gotten back from a convention in Dallas, Texas where we were guests. In the audience was Carol and another woman, who was there just to date Gary [Groth] and that was it, that was the audience.

Carol Kovinick Hernandez: That was at a panel. Nobody came.

GH: We were used to that. “Oh, well, nobody came…” so no big deal. We go to London, it was an auditorium filled with people.

CKH: When they came out on stage, Jaime’s wife at the time and I were thinking, “Okay, we’ll clap,” because we didn’t know if anybody is going to know who they are. And they came out and everybody cheered them and we were shocked. They all knew them, it was a packed auditorium and that was like, wow. [laughs]

CS: [To Gilbert]: You and Jaime are both influenced by Archie Comics. What other influences do you see in your work?

GH: Gosh, there’s so many, because I work almost on an unconscious level. I think the Archie comics one is probably…it’s almost like we decided to do Archie comics for adults, but for real, not a parody or anything like that. Take basically what we liked about Archie comics and then bring it into our own thing. Because a few of the artists that worked in Archie comics were actually very good. They were working in that style, but they were actually very good artists and they communicated a lot better than many of the Marvel and DC guys, who I liked for their own different reasons. You throw a stack of comics in front of a bunch of kids and they’ll gravitate to the Archie comics.

CS: When I was a kid in Brazil I had an American Betty And Veronica comic book, but I didn’t know how to read English, so I made up what the characters were saying. And when I actually learned English it was like, “Oh, the stories are dumb.” Then as I teenager I read Love And Rockets and I was like, “This is what I thought Archie comics were like, this is what I wanted them to be.”

GH: That’s funny because the cartoonist Lynda Barry said the same thing. She said she loved Archie comics as a kid and then when she went back to them, she goes, “Oh, these are for small children. But there’s comics here. Oh yeah, you can use this, but to make real comics.” 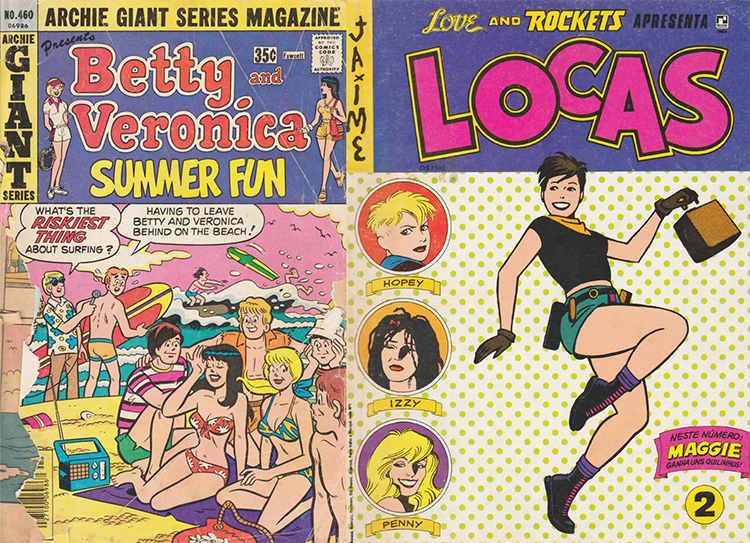 Cris Siqueira is the co-owner of Lion’s Tooth, a graphic novel subscription program and upcoming bookstore in Milwaukee. She is currently translating Gilbert Hernandez’ book Beyond Palomar to Brazilian Portuguese.