In Jim Jarmusch’s 1995 “psychedelic Western” Dead Man, William Blake (Johnny Depp) travels to the dystopian town of Machine for a new job. Things don’t go as planned, unfortunately, and Blake ends up shot, wanted for murder, and on the lam with an enigmatic drifter named Nobody (Gary Farmer). It’s a strange, moody, aggressively surreal film, shot in black and white and scored by Neil Young’s distorted and droning electric guitar. In the hands of Highland Community School‘s Elementary Director and Drama Coordinator Barry Weber, however, it’s the perfect source material for a grade school play featuring 4th, 5th, and 6th graders.

Yes, The Bully, The Liar & The Thief, opening Wednesday, March 2 at the Highland Community School Auditorium, is the latest idiosyncratic production from Weber and his preteen Highland Community Players. It follows last year’s David Lynch- and Twin Peaks-inspired play Judy Plays With Fire, as well as a host of other productions that have drawn inspiration from everything from William Gibson to GWAR. For Weber, it’s another chance to redefine what children’s theater can—and perhaps should—be.

“I want to write plays that I would have loved to be in when I was these kids’ age,” he says. “Most plays for this age group are ‘cutesy,’ have one or two leads and then ‘the chorus.’ My goal is to do something that lets kids show that they can be taken seriously as true professionals if we give them the opportunities to do something new and exciting.”

Even more so than Judy, Bully remains remarkably faithful to its cinematic inspiration (an opening train car sequence perfectly mimics Dead Man‘s oddball blackout structure, for example), albeit with age-appropriate twists. The character of Robert Johnson (6th grader Malachi Moore) travels to the town of Canaan not because of work, but because he’s transferring to a new school. Like Depp’s William Blake, he shares the name of a famous artist, which may or may not have significance later on. Meanwhile, his mysterious companion Charley Patton (5th grader Kaden Luter) guides him through a story filled with treacherous bounty hunters, a boy obsessed with selling his goat, and a dangerous town boss (actress Maeve Haley, relishing her role as Dead Man‘s Robert Mitchum character). It all adds up to a wonderfully weird take on Jarmusch and one of his best films. 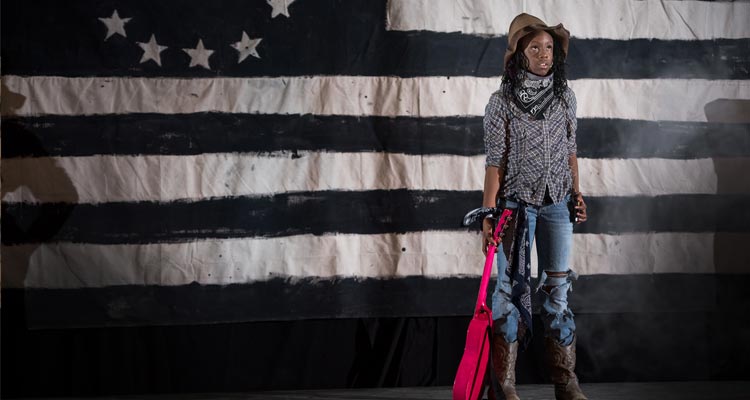 But what separates Bully from past Highland Community Players productions is the surprising number of serious issues being addressed. Labels are first and foremost on the play’s mind. Along with the titular Bully, Liar, and Thief, characters with names like Know-It-All, Lazy Bum, Crybaby, and Boy Who Likes The Color Pink populate the margins of the story, each struggling with the implications of their monikers. Indeed, Johnson’s entire quest is set in motion when, following an accident with a paper airplane, he’s mistakenly branded a bully. It’s a particularly loaded word, especially in schools today, and one that Weber handles with nuance and intelligence.

“There’s a lot of talk these days about bully legislation and anti-bully movements,” Weber says. “I’m totally down with that, but last year it started to hit me just how much that word, at least in schools, has entered the lexicon and is in danger of being overused. It can sometimes go to extremes. For kids here, and I would imagine for kids anywhere, if someone says, ‘Stop it, you bully!’ we can see that reaction. For kids, to be called a bully, a thief, or a snitch, these are some of the worst things to be called. I wanted to do something that explored that self-fulfilling prophecy. Yes, bullying is a real thing, but how much of that is also stemming from what’s already being expected, or how much we may pre-judge a culture or how someone acts?”

That self-fulfilling prophecy leads to one of Bully‘s most powerful scenes, in which Johnson confronts his pursuers and briefly embodies the label he’s been given. “You’ve heard of me. Have you heard my voice?” he growls. “You go to Boss Hogan and give her a message. Tell her this bully is through getting pushed around!” 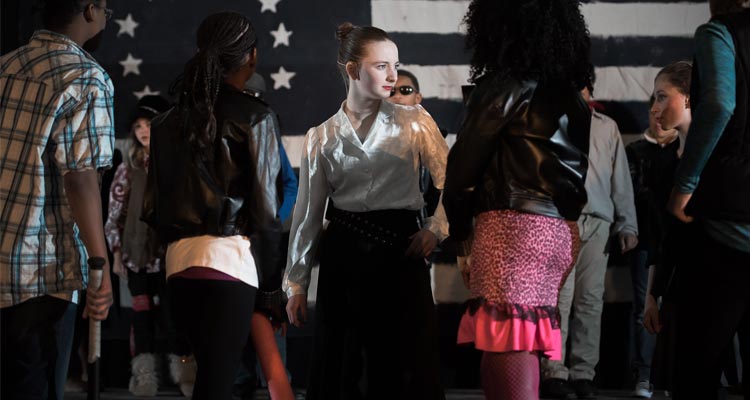 Also tossed into the mix are a host of other issues and references, including questions of identity and social justice, shout-outs to Grafton-based blues label Paramount Records, and music from the real Johnson and Patton (and even Public Enemy). Not that it’s all heavy themes and doom and gloom: It’s clear that the actors and the similarly preteen crew are having a blast, and Dead Man‘s episodic structure translates well to the organized chaos on and off the stage.

“I’ve been wanting a part like this for a long time,” Haley says of her role as Boss Hogan. “My part is basically going around yelling at people. My little brother is in it, too, and I like that.”

Asked what she enjoys most about the play and her role as Sheriff Warren, actress Jaliyiah Jackson motions toward Haley. “I like how everyone works together to take her down.”

As for Weber, he sees his plays not just as quirky distractions for kids and parents alike, but as vehicles for starting important conversations. “Yeah, I guess I write about what most interests me, and usually I relate that to what I would have loved to have learned about when I was a kid,” he says. “But my hope is that we are doing our part to show that children’s plays can actually be memorable experiences that engage our community in discussion.”

The Bully, The Liar & The Thief will be staged Wednesday, March 2 and Friday, March 4 at 6:30 p.m. at the Highland Community School Auditorium. A sneak-peak matinee is set for Tuesday, March 1 at 10 a.m.