It’s a fun time to be following the Milwaukee Bucks. Last night, the team won its 50th game of the season—the most in the NBA by a pretty wide margin—and became the fastest team in league history to clinch a playoff spot. Beyond the otherworldly play of Giannis Antetokounmpo and the commendable output by the unthinkably deep Bucks bench, Milwaukee’s amazing 2019-2020 season can be largely attributed to Khris Middleton.

The sharpshooting forward has the second most points of any Bucks player this season and his 43.8 three point percentage is good for 5th highest in the entire NBA. He’s less than a month removed from a 51-point game and fresh off his second consecutive All-Star Game. In the four games since the Bucks returned from the break, Middleton has averaged more than 28 points per contest and he’s allowed Antetokounmpo to get some rest by putting the team on his back. As if you need another reason to love Khash these days, he also autographed a can of Hamm’s beer for a fan.

Yesterday, Ricky Ramirez—who owns a Hamm’s-obsessed bar in Bay View called The Mothership—posted a picture of the signed tallboy. He tells Milwaukee Record a friend had the All-Star sign the can during an appearance at a Pick ‘n Save. The claim is corroborated with a picture of Middleton grinning as he puts his John Hancock on the beer “from the land of sky-blue water.” If you recall, this unorthodox autograph comes one season after Brook Lopez signed some dude’s microwave at another Pick ‘n Save fan appearance.

The Bucks have been a ton of fun lately, and it seems like they’re enjoying the ride just as much as we are. If you have any weird items that have been autographed by Milwaukee Bucks players or personnel (or any Wisconsin pro athlete), we want to hear about it. 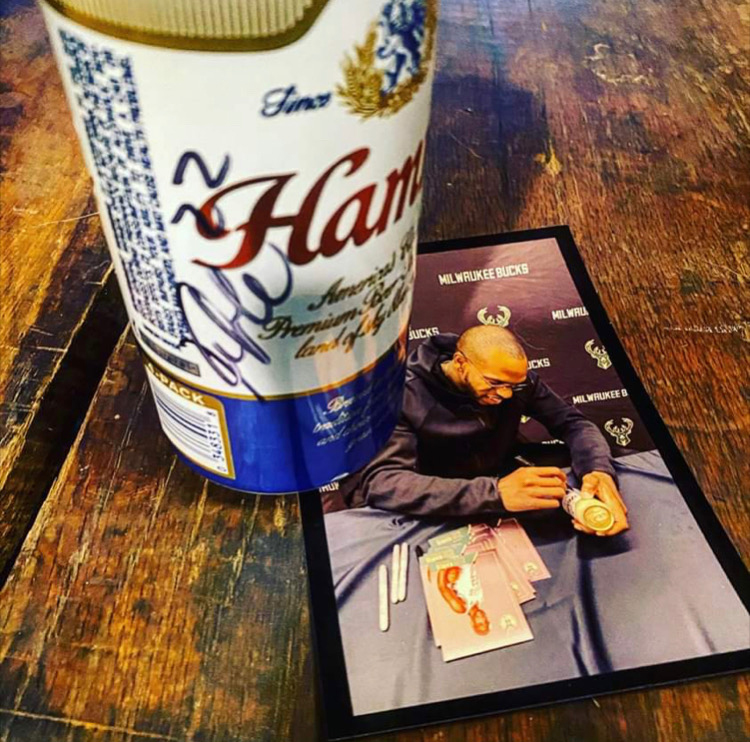