Friday afternoon, in an event dubbed both “historic” and “glorious,” Milwaukee’s long-awaited streetcar system, The Hop, officially opened to the public. A “Grand Hop-ening” at Cathedral Square Park celebrated the occasion; festivities will continue throughout the weekend. Hey! After 8,000 years of debate and controversy, Milwaukee finally—finally—has a streetcar! Neat!

Did we check out the “Grand Hop-ening”? Yes we did. Did we ride the streetcar? Yes we did. (Rides are free for the first year, by the way, courtesy of Potawatomi Hotel & Casino.) Was there a lot of shouting and commotion as cars got towed and protestors sounded off? You bet. Here’s our minute-by-minute report.

11:02 a.m. – It’s Hop-ening! It’s a gorgeous fall day in Cathedral Square Park. There’s free coffee and hot cider from Drift, and free pretzels from Milwaukee Pretzel Co. The slowly growing crowd is a mix of “Hop Helpers,” news crews, a ton of cops for some reason, and folks who never fail to show up when free stuff is involved. 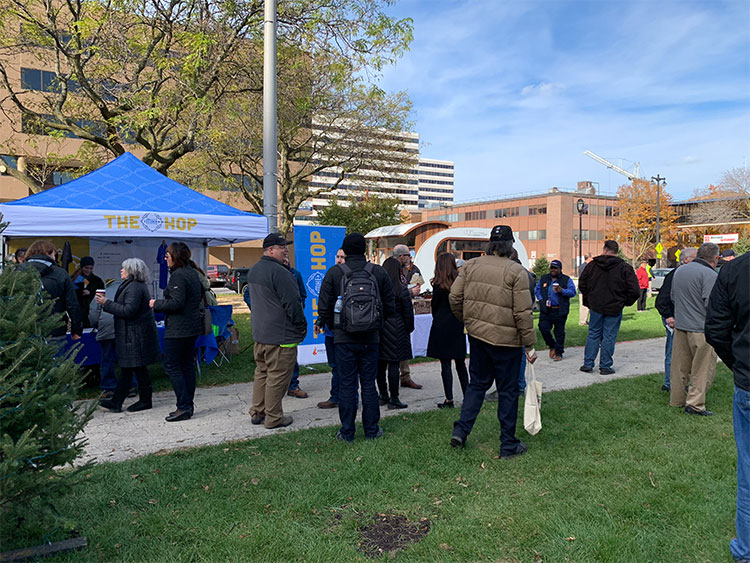 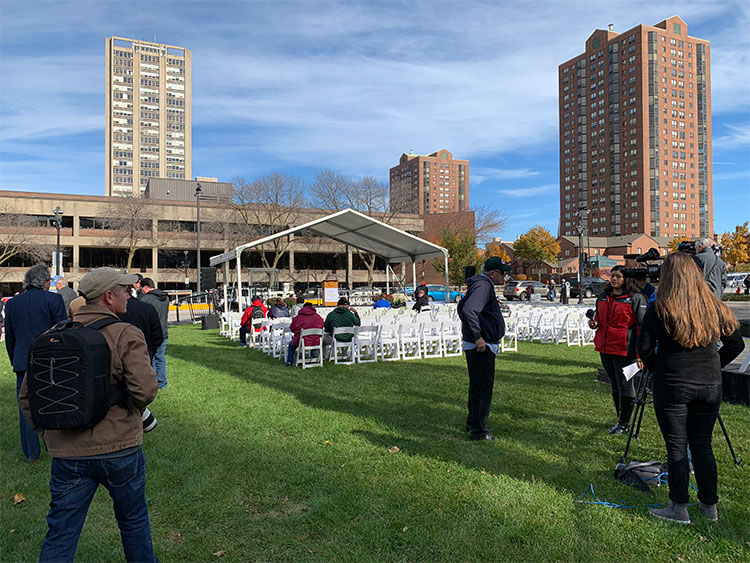 11:15 a.m. – Hamilton: “Give yourselves a hand for being part of history!” He plays Prince’s “Let’s Go Crazy.” Dearly beloved, we’re gathered here today to get through this thing called public transit.

11:19 a.m. – Apparently on break from harassing people at Planned Parenthood, a random dude accosts us with some hilarious anti-streetcar literature. We especially like the Rocky Horror-esque call-and-response sheet he’s prepared for Mayor Tom Barrett’s speech. “The streetcar will attract more millennials to the city. BOO!” 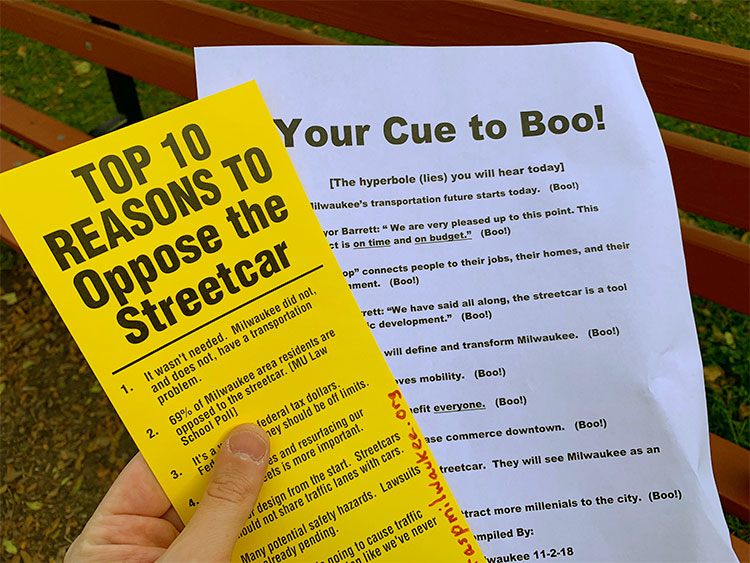 11:24 a.m. – Another funny omen: cars are being towed along Kilbourn Avenue, where two streetcars await their maiden public voyages. 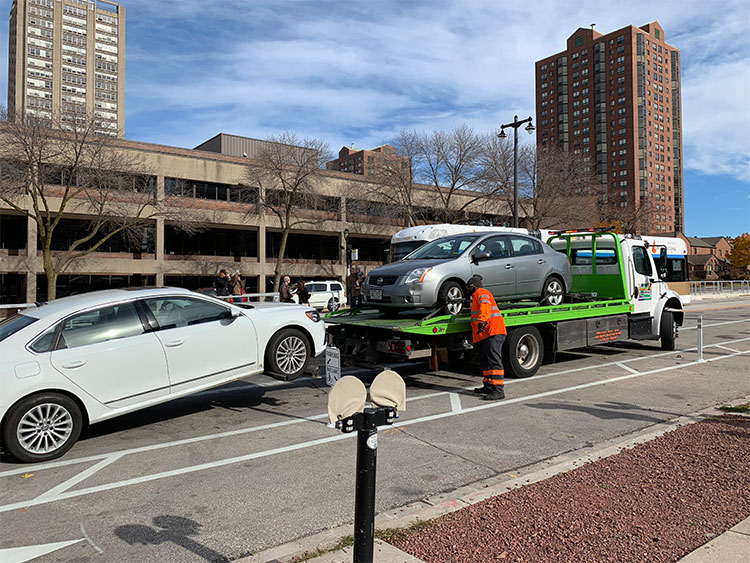 11:43 a.m. – Hamilton gets on the mic and runs through some ways to avoid getting hit by the streetcar. “Be safe!” he says.

11:50 a.m. – Cathedral Square Park is pretty packed. Lots of official-looking folks, lots of folks on their lunch breaks, still lots of cops. We even spot one of the regulars from our “pictures of people taking pictures of the streetcar” series. He’s fucking stoked.

12:04 p.m. – Okay, here we go! The Golda Meir Middle School Drumline kicks things off as everyone braces for an hour of speeches. 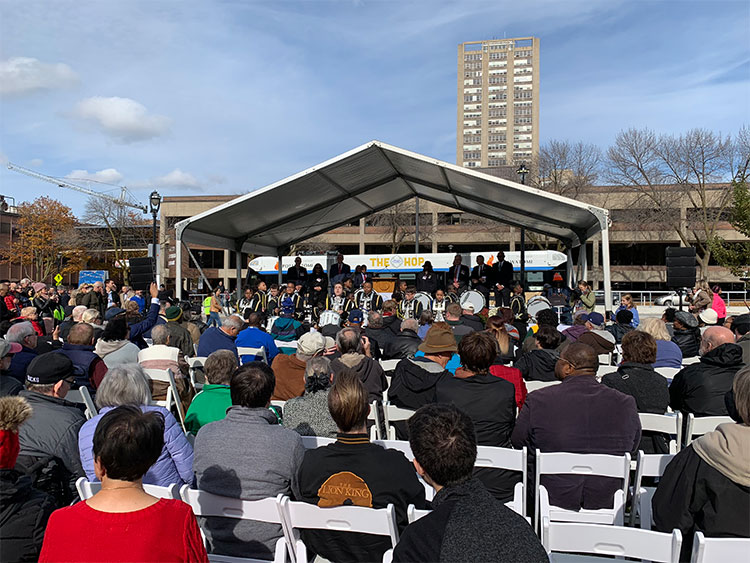 12:08 p.m. – And the speeches begin. Downtown Milwaukee BID executive director Beth Weirick says she remembers talking to her son about a streetcar when he was 5. He’s now 31. “I feel like I’m going to cry!”

12:16 p.m. – Mayor Barrett takes the podium and is immediately met with chants of “NO JUSTICE NO PEACE!” from a group of Black Panther protestors in the crowd. “How about a round of applause for those exercising their first amendment rights!” he says, like the old pro he is. 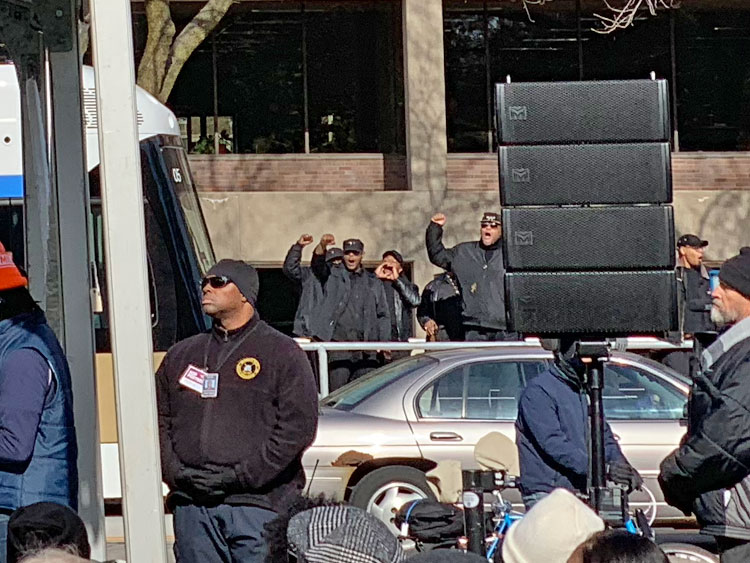 12:23 p.m. – Barrett soldiers on as the Black Panthers, now situated across the street, continue their chant, and as the anti-streetcar dude hoists his “BOO” and “STOP THE HOP” signs every 10 seconds. 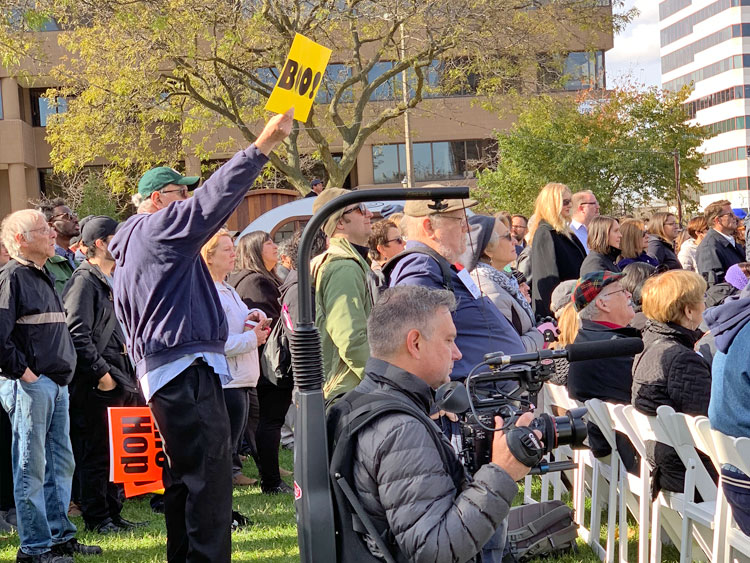 12:27 p.m. – U.S. Congresswoman Gwen Moore opens her speech with a nod to the Sugarhill Gang. “I said the hip, The Hop, the hippie the hippie to the hip hip Hop…”

12:30 p.m. – Moore: “Millennials are going to be attracted to our city!” The anti-streetcar dude is fuming.

12:31 p.m. – Milwaukee is twice as smart as the people of Shelbyville! Just tell us your idea and we’ll vote for it! [photo submitted] 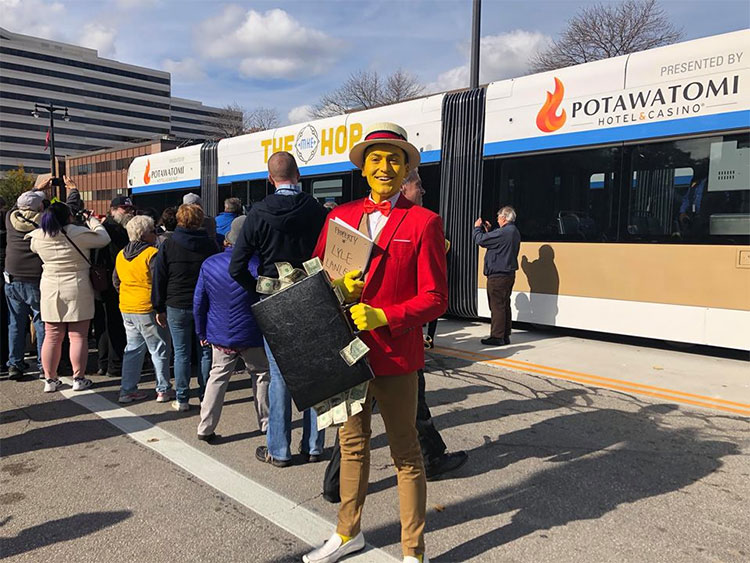 12:39 p.m. – Someone from the Federal Transit Administration is up next. No disrespect, but it’s time to get in line and ride this damn thing already. 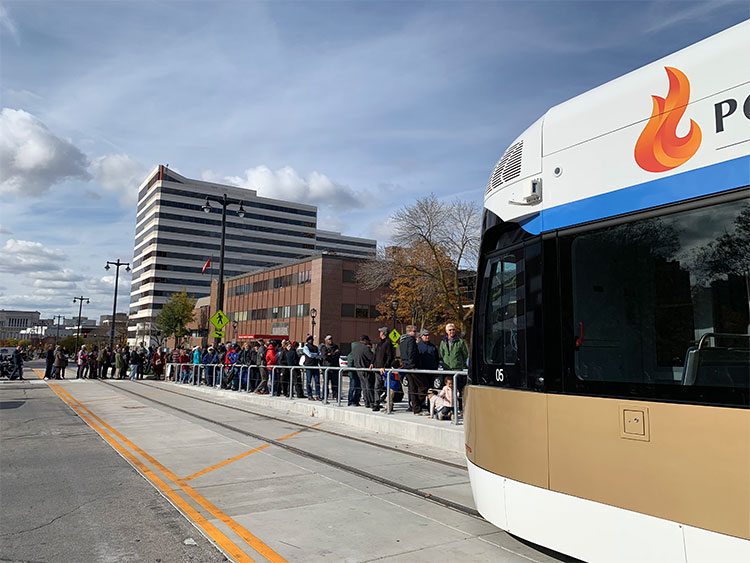 1:07 p.m. – Both streetcars fill up and take off, one headed north and the other headed south. We’re next. Here we go!!! 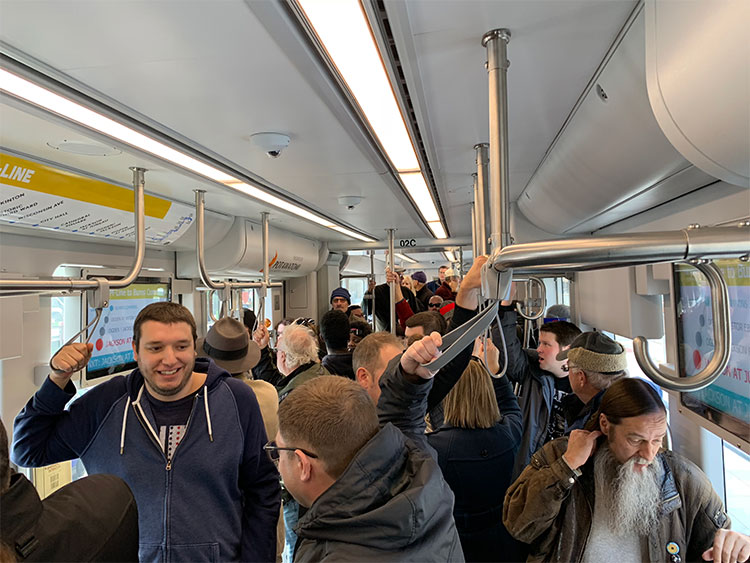 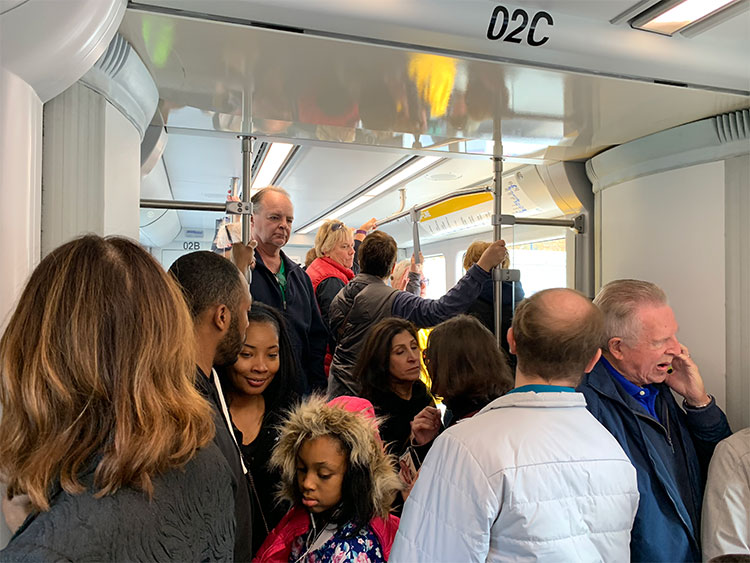 1:24 p.m. – Well, it’s nice. It’s like one of those trains you take at the airport. Milwaukee has a streetcar now. Cool!

1:30 p.m. – We “hop off” early at Van Buren and Ogden. People wave. We walk to the corner and take the 30 bus home. Happy Grand Hop-ening weekend, Milwaukee! 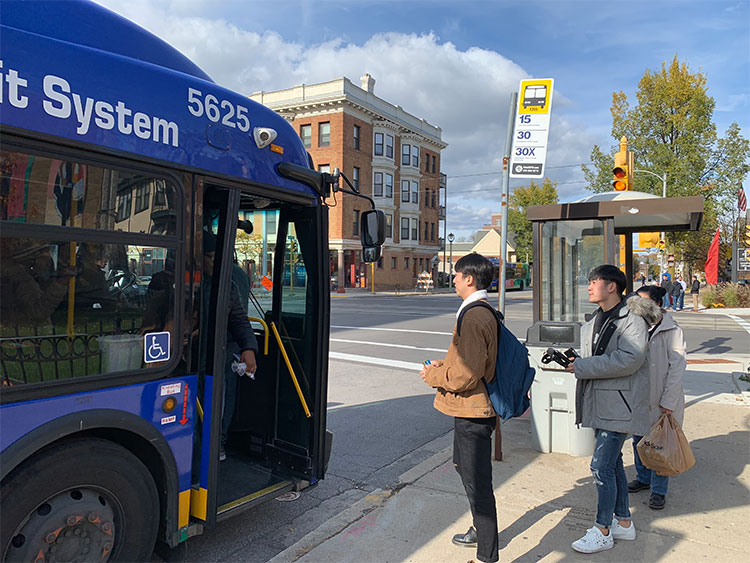