It’s about damn time someone opened up an Ernest Hemingway-themed bar. The man is known as much for his literary masterpieces as he is for his drinking prowess. Some of the upper-tier drinking quotes are penned—or typed…or bled?—by none other than the over-sauced scribe.

“There is nothing to writing. All you do is sit down at a typewriter and bleed.”

By this point, someone has surely wondered whether every bar is at least tangentially Hemingway-themed. The man loved the bottle. And even if that’s the case, Vermuteria 600 is extra devoted to the imbibing author and his spiritual musings. Ryan DeRosa, the manager of the lavish new lounge tucked away in the guts of the two-suite Walker’s Point’s Hotel Madrid (600 S. 6th Street, 414-488-9146), sums up an establishment that’s unofficially dedicated to one of humanity’s most renowned wordsmiths in unexpectedly succinct fashion. “This is a good place,” DeRosa says. “There’s a lot of liquor.” 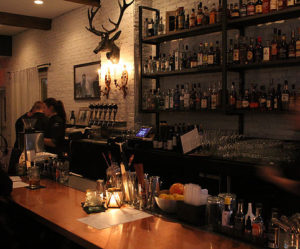 If you are able to find your way into Vermutería 600 (which is not the easiest thing in the world to do), you will be treated to a brand new, shimmering, shiny bar space. It’s bright, clean, big, and inviting.  Hemingway-esque accouterments line the walls of the bar. A dining area and wine cellar are accessible from the bar, which is worth mentioning. However, that’s for another day.

The drink menu is impressive. The vermouth selection is out of this world. Have you ever seen a bar with 20-plus vermouth offerings, broken down by county? You aren’t alone, but that’s what awaits you here. Moreover, there is a very tasty house-made vermouth on tap. Outside of that, the collection of spirits doesn’t lean heavily in one direction, but still manages to offer heavy hitters within each spirit style.

“When you work hard all day with your head and know you must work again the next day what else can change your ideas and make them run on a different plane like whisky? When you are cold and wet what else can warm you? Before an attack who can say anything that gives you the momentary well-being that rum does?”

As much as some are sure to embrace the whisky portion of the Hemingway quote above, rum was our vice for the evening, and the abrupt weather change from November summer to winter was the reason. A Hemingway Daiquiri—rum, lime, grapefruit juice, maraschino liqueur—was the only proper thing to have on this occasion, and it was flawlessly executed. Perhaps only a Papa Dobles would have been better, which is basically a double Hemingway Daiquiri. Outside the realm of liquor, Vermutería 600 has 24 bottled beers and ciders (priced between $3 and $10), six draft lines, and approximately 40 varieties of sparking, white, red, dessert, and reserve wines.

“Don’t bother with churches, government buildings or city squares. If you want to know about a culture, spend a night in its bars.”

Vermutería 600 represents a newer version of Walker’s Point, to be sure. The average cocktail consumer won’t feel completely out of place, but, the posh lounge also doesn’t offer the typical Walker’s Point bar vibe. It’s doubtful any fights will be picked with the MPS administration, nor will Old Fashioneds flow from a bubbler. No, pedal taverns are not likely to make this a necessary stop next summer, but this obscure hotel bar that’s rooted in the past is a welcome addition to bolster the neighborhood’s ongoing transition.