It’s not exactly going out on a limb to declare Milwaukee Record to be the city’s—and likely the state’s—foremost outlet for all your “ill-fated and all-around dumb food and drink adventures executed for no particular reason” reading needs. In fewer than three years, we ate at every Taco Bell in Milwaukee in eight hours, drove to Chicago in effort to get drunk at the flagship Taco Bell Cantina, visited every George Webb on earth in a single day, caused a restaurant to change its bottomless mimosa policy, tried to consume a five-foot pizza, absolutely failed to eat 12 pounds of pizza, got drunk at every Milwaukee gay bar in a single evening, and drove three states away to have a sad last meal at the world’s last Hot ‘N Now.

With the volume of over-consumption content we’ve amassed in under three years’ time, Milwaukee Record has reached the point where restaurants now approach us when they come up with a new monstrous item (and sometimes associated challenge), oftentimes asking if we’ll come by to try and eat it. Is it an honor? Is it incredibly sad? You be the judge. Allow us to save you some time. It’s the sad one. The latest instance of this occurred when Bumstead Provisions reached out to see if we’d try to tackle their Giant Pretzel Sandwich.

Back in December, the new Bay View bar, restaurant, deli, and corner store released its biggest Chef’s Board sandwich yet. The $25 item features a 10-inch wide Milwaukee Pretzel Company pretzel that weighs 1.5 pounds on its own. That gigantic glob of twisted dough is cut in half to make a bun, which is stuffed with deli meat, cheese, and tomatoes with a side of stone ground mustard and beer cheese dip. In total, this gigantic sandwich weighs in somewhere between 3.5 and 4 pounds. It’d be a perfect item for three or four people to casually share over a drink or two. However, Bumstead wanted one of us to eat the behemoth alone.

With little to gain except weigh and some page impressions, I wanted to raise the stakes. Instead of just taking this huge pretzel to the dome, feeling terrible, writing about it, and returning to business as usual (though a slightly more broken man than before), I thought it’d be best to ask Bumstead to put some skin in the game with a strange competition of sorts. Basically, we’d see if five Bumstead employees could drink an entire sixth barrel—aka just over five gallons—of a non-light beer of their choosing. In turn, they now said we should have two staffers try to take down two pretzel sandwiches total. Confused? Just picture one of those “a train leaves the station…” test questions, except every train is an out-of-shape dude in his 30s.

What would the winner get? Uh, we forgot to work that out beforehand…so, um, pride. Yeah! Pride. Or more accurately, slightly less shame than the losing team. Plus, this could be some type of archived scientific experiment, which could be a rarity these next four years.

Wednesday afternoon, during the post-lunch lull, I arrived at Bumstead with Josh Hoppert, our Director Of Advertising, my partner in George Webb misery, and the eater who managed a slightly less embarrassing performance than Matt Wild had during our three-man Pizza Shuttle Challenge last summer. As we waited to meat our maker, we sampled the beer our competitors would be taking down. The Fermentorium, a young Cedarburg-based brewery, would be the drink of choice. Its Floodplain pale ale was quite good. I’d honestly love to have two or three sometime, but the bitter, Centennial-hopped beer and its 5.7 ABV wouldn’t be my first choice for this contest. Advantage us, at least that’s what I thought. 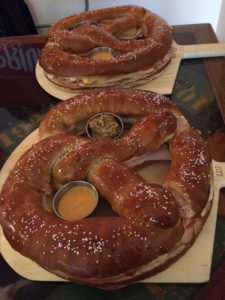 Soon, Bumstead’s team—which consisted of both owners, a chef, a bartender, and someone from The Fermentorium—filled their glasses and sat beside us at a table which already had our two hulking pretzels on it. At first glance, the sandwich actually looked pretty manageable. It also looked incredible. The buttered and lightly salted bun was warm and fluffy. It was packed with piles of oven roasted turkey, chunks of fried chicken, gooey muenster cheese, and juicy tomatoes.

The scent of the rich beer cheese vied for control of my nostrils, with the aroma of the tender deli meats throwing its hat in the mix as well. I was no longer afraid. I just wanted to eat the fucker. Even if I fell short, I’d get to leave with most of the sandwich stowed away in my body cavity.

Sounds like a win-win, right? As I dove in and devoured approximately a third of it within 15 minutes, I would’ve been inclined to agree. Josh seemed to share my sentiment, as he matched my pace almost by for bite. While we ate and kept conversation to a minimum, the other five guys drank at a fairly leisurely pace. They joked around and remarked that we were going to win. Though we made a sizable dent in a relatively short time and the sandwich was still as enjoyable to eat as it was during the first bite (if not more so, since I got cocky and started spreading the awesome mustard on bites), I wasn’t about to declare us the winner. I knew the wall was a-comin’. 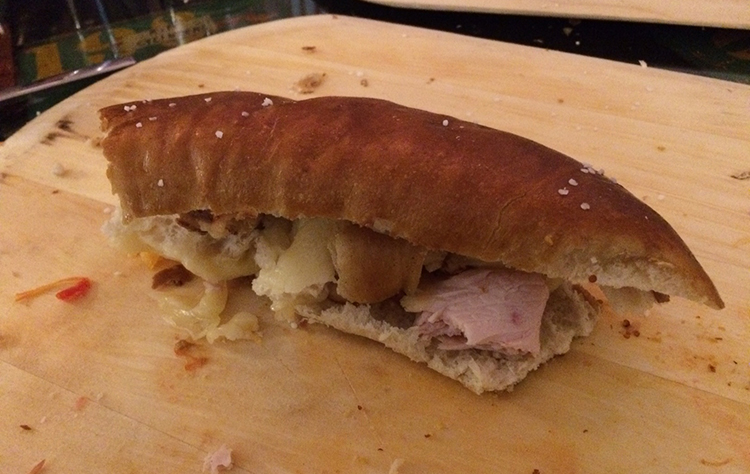 Around the hour mark, Team Sandwich’s pace had slowed considerably. With maybe a sixth of the pretzel remaining, I was suddenly at a near-standstill. I was trying to continue making progress by pulling the sandwich apart and alternating nibbles between the now-dry meat, hardened cheese, tomatoes, bread innards, and flimsy pretzel skin. Tasty as they were, I would no longer be fucking with the mustard and beer cheese. Josh had fallen slightly behind, but both his sandwich and his composure remained in tact. It was a tough task, but we were in good shape…at least in terms of being able to eat something that would ensure we remained in bad shape health-wise.

Unfortunately, our strong start prompted Bumstead’s team to pick up its pace. Once the majority of the team hit beer number eight (of sub-16-ounce glasses), their vulnerabilities floated to the surface. They started chiding teammates who they thought didn’t drink enough fast enough. Their collective volume increased. Criticism related to the unwillingness to shoot “chug videos” on Facebook Live caused in-fighting. Politics came up in conversation. One member said “Man, I miss cots” for some reason. They were distracted. By the time one member of Team Beer was shit-housed enough to be looking on his phone and learned Mary Tyler Moore passed away, I thought “We’re going to make it after all.”

Too soon? Maybe, but I was sandwich drunk. The abundance of turkey I had inside of me caused shit to hit the tryptophan. By the 90-minute mark, I was growing weary. Even with the impromptu Mary Tyler Moore pause, I knew we had a long Rhoda-head. (Sorry!) My modest chunk of sandwich was like a rickety rope bridge between being almost full and being almost fulfilled. Beneath that shaky bridge was a vast and unforgiving desert valley disguised as a delectable pretzel. Josh matched the pace, except in a far less-disgusting manner, with an intact sandwich and markedly more composure than I had. I was full. The guys next to us were drunk, loud, and gaining on us. I left the noise to browse the adjoining provisional shop and examine what beer I’d buy when I would be able to take in calories again. Astoundingly, bombers of Fermentorium’s Juice Packets seemed especially enticing. Envy perhaps? 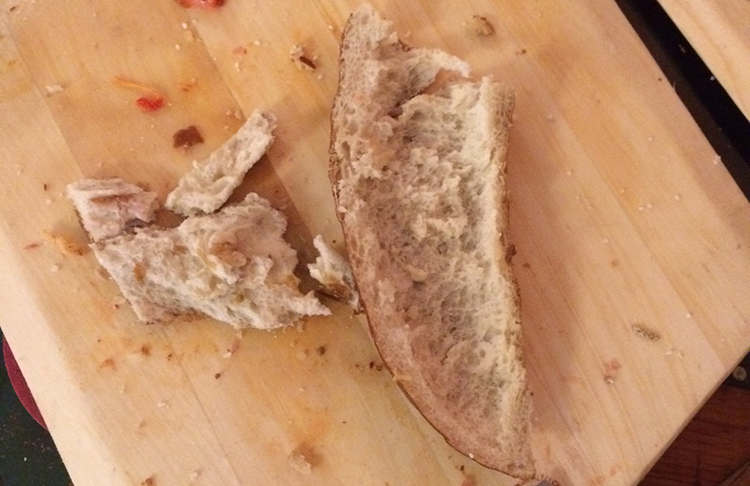 Shortly after the two-hour mark, Team Beer poured enough preemptive pints (again, 12 ounces and not 16) to blow the keg. The rest of The Fermentorium was now on the table. Unsure if it was the urgency of seeing how close we were to losing or whether I just wanted to go home to crawl into bed and forget this ever happened, I sped up. As I kept a watchful eye on the pace of the (now incredibly drunk) competitors, I lethargically chomped away at my “sandwich” that was now just carved away pretzel husks. Though I finished my sandwich about two hours and 10 minutes into the wholly unnecessary competition, Team Beer wound up draining the last drop at the 2:23 mark. Josh had a finger sandwich-sized slice left that may as well have been a mountain.

I harbor no harsh feelings towards Josh. Something tells me that his two-inch sliver of hardened pretzel and now-cold room temperature meat was all the difference between the divergent outcomes of either being uncomfortable for a while or projectile vomiting in your bathroom within 30 seconds of getting home. I finished first, but by the rules set, Bumstead technically won. And they earned it. But based on how everyone looked and felt, there were no winners that day. There were only losers. So what did we learn?

• The first two pounds of Bumstead’s Giant Pretzel Sandwich are incredible. The sandwich is also just $20 during happy hour. Eat it in a group and never alone. You’ll love it. Shit, I’m eating it again (with help) for sure
• Five guys will show their true, hilarious colors at 3 p.m. after enough beers
• Though Bumstead technically “won,” we all absolutely lost. It was terrible
• If for some unthinkable reason you would still like to try this contest after reading this, you can get a free bomber of Fermentorium beer if you finish the Giant Pretzel Sandwich in an hour

A train left Milwaukee Record at 2:30 p.m. going at the speed of a giant pretzel. Another train left Bumstead Station carrying roughly 50 beers. Everyone died. The end.