Here at Milwaukee Record, we employ a sentient machine known as the Great Job, Milwaukee! Bot to keep track of the city’s many appearances on dopey online lists, as well as any time a national publication deigns to acknowledges our pathetic Midwest existence. Enjoy?

Perhaps you heard that, over the weekend, Milwaukee was named the best city in the United States. Don’t worry, it’s a lot dumber than it sounds: On October 25, some random dude in L.A. made a random Twitter bracket where people could vote for the “best U.S. city.” Milwaukee Twitter, being Milwaukee Twitter, got really excited about it. Milwaukee soundly defeated Miami, San Francisco, Minneapolis, Chicago, and other cities whose residents absolutely could not give two shits about a random Twitter bracket from some random dude in L.A. Oh, but our residents gave multiple shits. And so did our media! The Milwaukee Journal Sentinel wrote about it. Milwaukee Magazine wrote about it. OnMilwaukee wrote about it. The Milwaukee Business Journal wrote about it. Television news stations reported on it. Our mayor tweeted about it. Folks, we don’t need to do this to ourselves. We really don’t.

Milwaukee eventually made it to the “finals” and went head to head with New York City. Approximately 3,600 people bothered to vote for New York. Approximately 8,400 Milwaukeeans voted for Milwaukee. Milwaukee “won.” Everyone in Milwaukee wrote about it again. No one in New York wrote about it. The random dude in L.A. who cooked up the random Twitter bracket, meanwhile, began writing a 3,000-page book, How To Get More Twitter Followers. Pages 1-3,000: “Cook up a random Twitter bracket for ‘best U.S. city’ and make sure someone in Milwaukee sees it.”

Anyway, we’re sorry to report that our “best U.S. city” designation has been stripped away. Rent.com has deemed Milwaukee to be one of the worst U.S. cities for donut lovers. One of the worst. Read our “Donuts Per Density Rank” and weep: 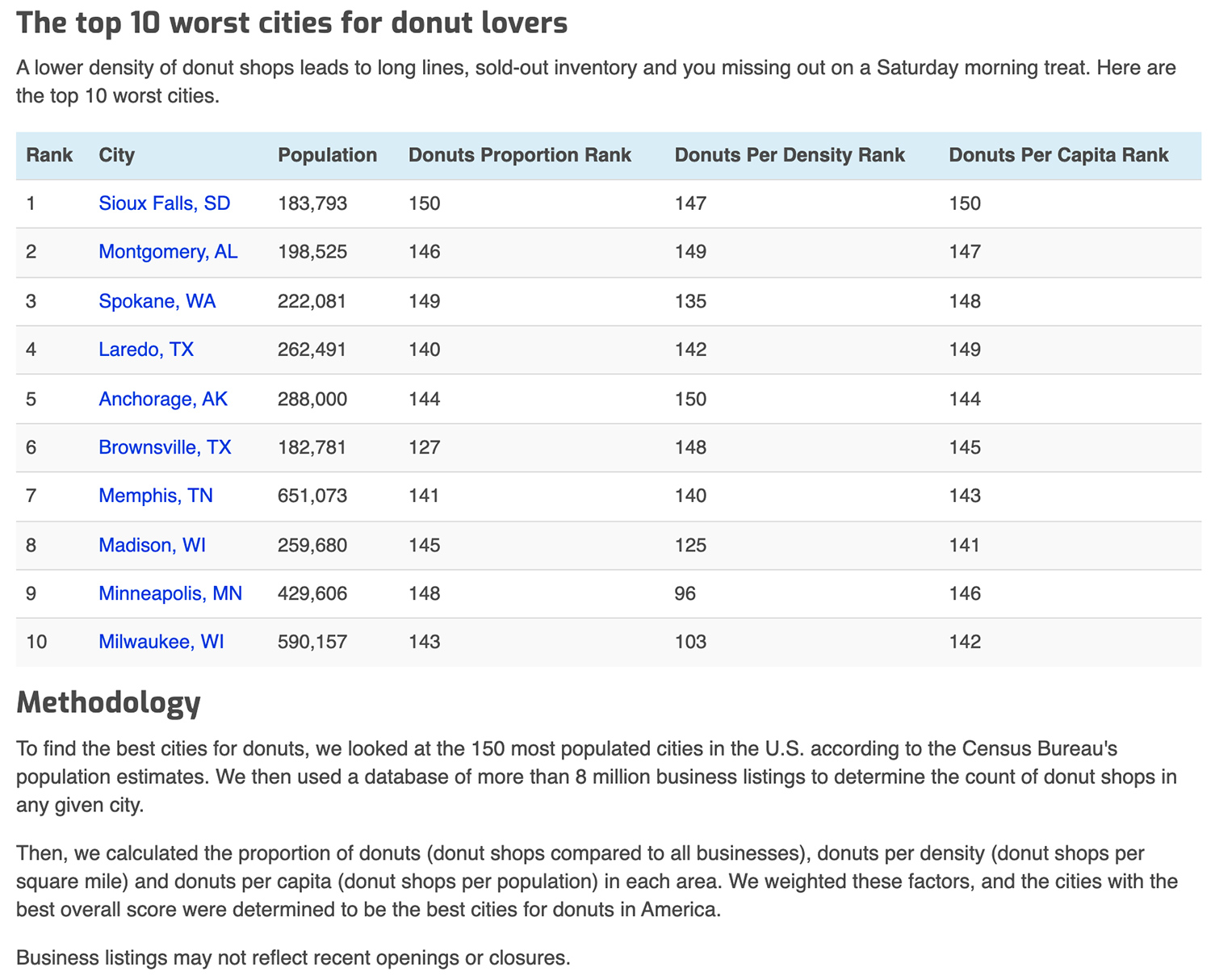 • Terrible Job, Milwaukee! We’re the 140th best city for witches? Because we don’t have enough covens? We beg to differ

• Great Job, Milwaukee! The New York Times spent 36 hours in Milwaukee and had a nice time

• Great Job, Milwaukee! We really clicked the hell out of that Vogue article