February 9 marks National Pizza Pie Day in America. Here at Milwaukee Record, every day is pizza day. In personal pan-sized history, we’ve made little effort to conceal our affinity for pizza (‘za-ffinity?). If you’ve missed some of our restaurant reviews, eating challenges, unparalleled coverage of pizza music, and diligent consumption of slices in both cone and bacon bottom forms, allow us to get you up to speed and serve you some of our favorite articles we’ve written about pizza.

First Impression: Monster Pizza MKE
“RC Schmidt has found a way to stay afloat by periodically coming up for air with a slightly new concept. In 2010, his semi-upscale Oakland Trattoria changed its name and scaled back its focus to become SoLo Pizza. Earlier this month, the space underwent another metamorphosis to become Monster Pizza MKE, a fast and affordable late night option that focuses on huge pizzas and by-the-slice specialties.”

The Randoms 2016: Best pizza business inside of a bar (Bay View)
“Down Howell Avenue, a few blocks south of Humboldt Park, sits a longstanding neighborhood tap called The Bubbler. That’s not the important part, though. At the rear of that bar sits an unaffiliated pizza place that sets its own hours and has a different owner altogether. Vinchi’s Pizza started out in a southside bar—where it thrived since the ’90s—before moving to the back of the Bubbler. Those who have managed to find this restaurant (within a bar) surely feel fortunate they had.” 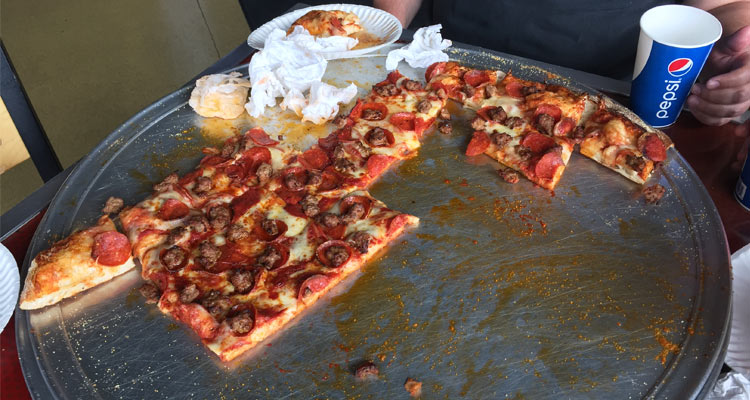 We tried (and failed) “Wisconsin’s Largest Pizza Challenge” at Pizza Shuttle
“Wishing to look anywhere that isn’t the pizza I was eagerly masticating half an hour earlier, I gaze upward and see a partially inflated Mylar balloon, likely left from a child’s birthday party. I think of that faceless child, how he or she has their whole life ahead of them, and a chance to avoid the same mistakes I’ve made to bring me to the very same table where they’d celebrated just days earlier.”

First Impression: Fixture Pizza Pub
“While we doubt its ‘Milwaukee Style’ will take the city by storm, and we sincerely hope the flour-bombing was an anomaly for the young restaurant, Fixture Pizza Pub, with delectable food, a full bar, and (eventually) a bocce ball court could be just what Walker’s Point needed.” 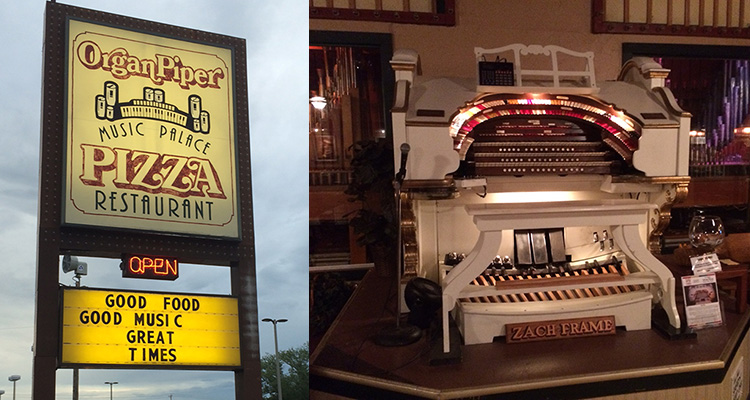 Music review: The organist at Organ Piper Pizza
“Without that Wurlitzer, Organ Piper is basically a Shakey’s that lost its franchise distinction and, in the process, most of its good arcade games. The 1929 theatre organ with its 542 controls at a player’s disposal at any moment, the room full of pipes, the nearby wall-mounted cocktail kit percussion, and kitschy mallard quack (or horn) section—both controlled by foot pedals and keys manned by the organist—are the reason people continue to embark down 108th Street to the restaurant-turned-relic.”

First Impression: Wy’east Pizza
“Comparisons aside, here is yet another hot batch of food fetishism, passionately applied to the most worthy of caloric causes. In this case it yields a friendly, yes, neighborhood joint. One that is easy to root for, and impossible not to want to try again.”

First Impression: Sal’s Pizza
“Barring an (unlikely) interior redecoration, Sal’s Pizza will remain, first and foremost, a college-neighborhood pizza joint. And that’s okay—it does what it does extremely well, and goodness knows the UWM area needs some decent (and cheap) dining options. It may not be worth a special trip, but if you’re in the neighborhood post-exam or pre-bar, bemoaning the no-longer-in-existence Cloud 9 barbershop, Sal’s will do anything but break your heart.” 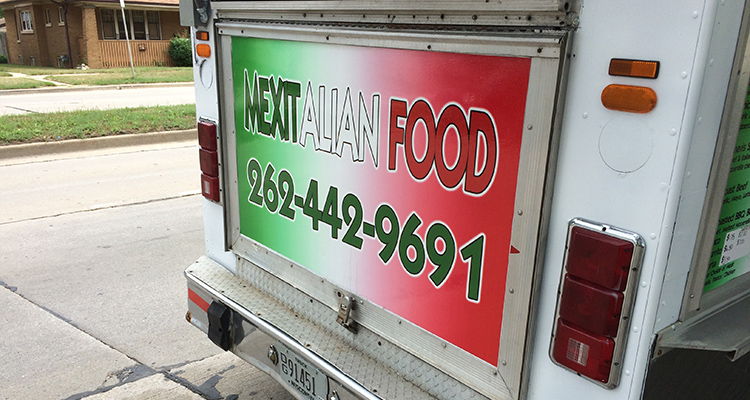 The MexItalian Food Truck is so random, so awesome
“Nestled tight against the curb and beneath the shade of tree branches on the south side causeway, the cuisines of two massively different countries coalesce, culinary styles separated by an ocean fuse together like some kind of Pangea-like habitat where only the finest flavors reside, and a city so divided is suddenly united…at least until the last bite. Take heed, Milwaukee. The MexItalian Food Truck is here and it’s fucking awesome.”

We ate all the new “food items” at Summerfest
“From the folks who brought you The Original Pizza Cone™ and “Bacon Bottom Pizza” comes this latest ‘Za-bomination from the Solo Pizza kiosk. The longstanding Big Gig pizza stand’s hedonistic focus on fattening and unconventional slice bottoms extends into this year’s festivities with the Mac Bottom Pizza, wherein a viscous amalgam of pepperoni, sausage, diced bacon, partially melted mozzarella, and sodium-rich marinara sauce is slopped atop a deep fried slab of macaroni and cheese.” 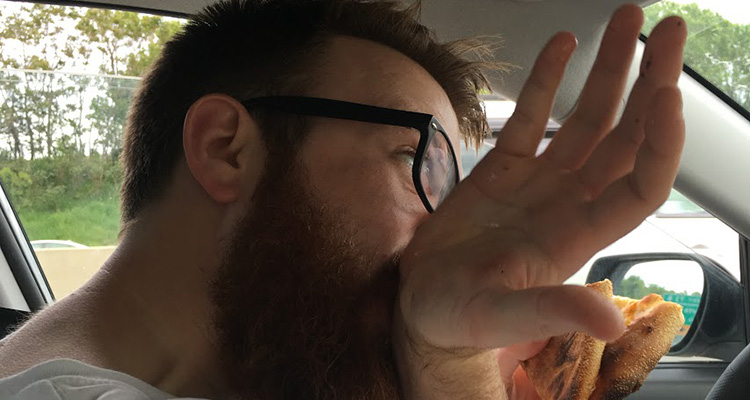 I ate Dave Begel’s “Top 10 Milwaukee foods to eat while you are driving” while I was driving
“Turns out while the cheese, potato, and ranch stay put, the combination produces streams of grease. The oils pooled into the crevice created by the fold and ran like a river down my arm to my elbow.”

14 Wisconsin “delicacies” other states don’t understand
“Pizza cones: What in the island of Dr. Moreau is going on here? ‘Hey, like pizza but not a fan of dignity? Then you’ll love eating pizza shaped like a cone.’” 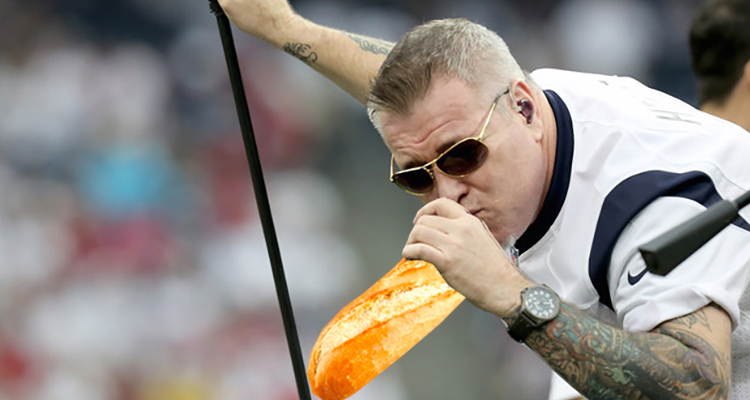 23 bread-free Summerfest foods to eat when Smash Mouth plays
“On paper, this one sounds awesome. However, we can tell you from experience that this one is rough. The crust is replaced by a layer of fat, sodium, and heartburn. Still, as shitty and regrettable as the bacon bottom pizza may be, it’s a ‘when in Rome’-type delicacy that one wouldn’t dare dream of hucking Smash Mouth’s way.”

Personal pan’s labyrinth: A story of Book It! redemption
“Though my star-emblazoned Book It! pin—the representative trinket commemorating my tenure on the rails with The Boxcar Children, my proximity to Matt Christopher’s tales of sports triumph, and the incalculable Goosebumps delivered to me by the pen of R.L. Stine—is likely now the thrift store score proudly affixed to the messenger bag of some 14-year-old with a side-mullet, I was officially back in Book It!, baby.”

Last Impression: VIA Downer
“Fortunately, Transfer offers all the same menu items VIA Downer did (and more). Yet a restaurant is so much more than just its food. It’s the look and feel of the interior, the staff, a place to enjoy a meal and conversation either close to home or outside one’s usual local haunts. For 49 months, VIA Downer was a culinary cornerstone on an underutilized Milwaukee causeway. The restaurant will be missed.”

12 unexpected places to get drunk in Milwaukee
“Chuck E. Cheese’s is famously known as a place ‘where a kid can be a kid.’ However, while hoards of children are enjoying games, sub-par pizza, and music provided by a band of creepy animatronic animals at America’s premier youth birthday party destination, some adult supervisors likely wouldn’t mind a drink.”

I tried (and utterly failed) Zaffiro’s first “Big Z Challenge”
“A thing I loved minutes earlier quickly became something I hated. I felt like Homer Simpson cementing his ‘Greenhorn’ status when he failed to eat that huge steak. I started to pray Tony Randall would walk through the door to give me eating tips. But Tony Randall was dead, and my chances of Big Z glory were on life support.” 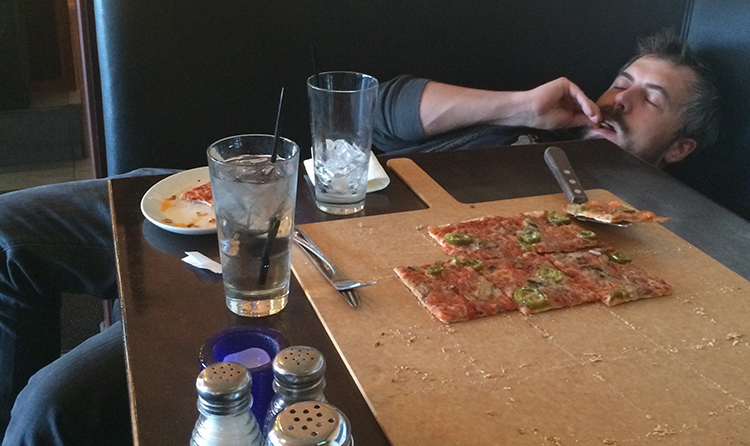