For better or worse, it’s possible to stand virtually anywhere in the city of Milwaukee, close your eyes, walk 20 paces, and find a place to get a drink. If you can’t find a nearby bar or tavern in Milwaukee, not only are you not trying, you’re probably not even in Milwaukee. But what about those times when your favorite watering hole/street fest just isn’t enough? What about the times when you want to catch a buzz somewhere off the beaten bar-crawl path? Inspired by the recent news of a Taco Bell in Chicago (Taco Bell!) getting its liquor license, we rounded up 12 equally unexpected places to get drunk in the Brew City.

1. Milwaukee County Zoo
If you spend enough time out at bars (especially select places on Water Street), you’ll eventually be exposed to some of mankind’s more animalistic tendencies. Under the glow of neon light and flatscreen televisions, one is prone to witness—or even participate in—mating dances, primal calls (“Woo!”), courting rituals, and vicious battles for territory or the attention of the opposite sex. Though countless traditional drinking establishments in Milwaukee offer patrons the potentially zoo-like atmosphere, one place gives you the real thing. In addition to offering a wide array of beverages on the grounds, the Milwaukee County Zoo hosts occasional events, and offers accommodations for private events (complete with reasonable beer, wine, and cocktail packages) so you can show your employees that there are at least a few mammals in Milwaukee County that have it worse than they do.

2. Mitchell Park Conservatory Domes
Flora, fauna and…Blue Moon?! No matter the season, the Mitchell Park Conservatory Domes (or “The Domes”) flourish with thousands of exotic plants and a flock-ton of tropical birds. Come winter, the incomparable Milwaukee landmark is paired with local entertainment for its “Music Under Glass” series. Since a performance in a unique and vibrant setting during the longest and cruelest season apparently isn’t enough for most residents, organizers have also implemented alcohol into the Blue Moon-sponsored concert series. You simply haven’t lived until you’ve gone to a bio dome in February to see Lil Rev while hammered-drunk on citrusy macrobrew. The Domes can also be rented for wedding ceremonies, wedding receptions, and other private events.

3. G. Groppi Food Market
High-end Bay View shop G. Groppi Food Market is one of the few grocery stores in Milwaukee where customers can purchase food and alcohol during the same transaction. To narrow things down even more, Groppi is on the even shorter list of Milwaukee markets with a bar inside. Between the deli and liquor sections sits Louie’s Coop, a small makeshift bar that seats 10 or so patrons. Certainly, the market bar exists in the hope one of the eight tap options or some of the nearby vino will inspire a subsequent purchase, but it could theoretically serve as a place to get blotto. Who knows, maybe after enough pinot noir, the grocery prices won’t seem so bad. 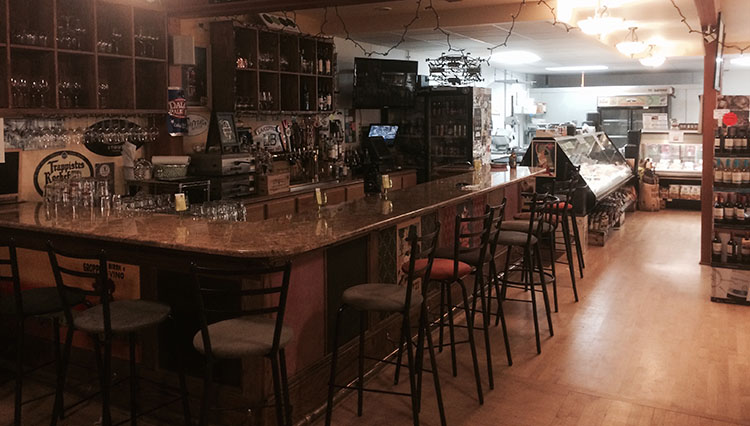 4. Oriental Theater
Alcohol at movie theaters is relatively common these days, what with your iPics, Avalon, and Fox Bay Cinema Grills. Still, there’s something just plain weird about getting a drink at the Oriental. Maybe it’s because the East Side theater only started serving beer and booze in 2009. Maybe it’s because the concession-stand bar seems more like your parents’ personal stash than a real bar. Or maybe it’s because alcohol is usually only found in theaters with IMAX, 3D, stadium seating, and all that other “premium” bullshit. Whatever the case, let it be known that the Oriental serves up a surprisingly strong cocktail, and that watching the latest Wes Anderson diorama while sipping a rum and coke is a true delight.

5. Chase Avenue Chuck E. Cheese’s
Chuck E. Cheese’s is famously known as a place “where a kid can be a kid.” However, while hoards of children are enjoying games, sub-par pizza, and music provided by a band of creepy animatronic animals at America’s premier youth birthday party destination, some adult supervisors likely wouldn’t mind a drink. Fortunately, Mr. Cheese has moused his way into a liquor license. According to the franchise’s menu, grown ups at Milwaukee’s only Chuck E. Cheese’s can wash down their pizza, salads, sandwiches, and wraps with a beer. Sure, they likely just offer only overpriced domestics, but once you hit that “Good at Skee-Ball” level of intoxication, the tickets will start rolling in and that unlicensed Stewie Griffin doll will be all yours!

6. Milwaukee Art Museum
Has it really been almost 10 years since the infamous “Martinifest” at the Milwaukee Art Museum? Yes it has: Back in February 2006, attendees at the Clear Channel-organized MAM event got good and loaded, climbed atop a few of the museum’s bronze sculptures, and damaged them in the process. The museum was not amused. Happily, booze and priceless works of art co-mingle much better these days in the form of the highly successful MAM After Dark. The monthly parties have featured themes ranging from tattoo art to the wizardry of Video Villains, and have (responsibly) mixed alcohol into the proceedings. The next MAM After Dark will coincide with the MAM-hosted Lakefront Festival of Art on Friday, June 19.

7. General Mitchell International Airport
The dubious honor of being both the first watering hole people encounter upon landing in Milwaukee and the last one they pass before flying out of the city belongs to the Chili’s Too restaurant at Mitchell International Airport. If you’re at Mitchell preparing to depart from Milwaukee, there’s no shame in putting away a few cocktails before takeoff. If you’ve just landed, though, reconsider your choice in bar. There are literally thousands of better options.

8. Milwaukee Public Market
The Milwaukee Public Market is such a riot of people, vendors, and noise that you don’t even need alcohol to feel disorientated. Once you’ve acclimated to the hubbub of the downtown destination, however, you can score a margarita at Margarita Paradise, or some wine at Thief Wine Shop & Bar. Just drink responsibly, please, lest you hatch a hairbrained scheme to make off with that giant inflatable lobster perched above St. Paul Fish Company (which also sells alcohol, by the way).

9. Midwest Diner
Midwest Diner isn’t even close to being the only greasy spoon in Milwaukee to sell beer. However, it very well could be the only one to give free beer to customers. For years, the Kinnickinnic Avenue diner has offered a free tap of Budweiser or Bud Light with the purchase of any entree, because nothing goes with a Greek omelet and some video poker like an ice cold Bud.

10. Grand Avenue Mall
Remember when there was a small bar in the Grand Avenue Mall food court? You know, where that Tomato place is now? Yeah, that was crazy. Anyway, while it may be impossible to catch a weird buzz in Grand Avenue proper these days, you can still tie one on at the adjoining Applebee’s. Just use the mall’s main Wisconsin Avenue entrance, open the door to your left, and enter a world of chain-restaurant mediocrity that isn’t as fancy as TGI Fridays, but not as downscale as Red Lobster. (For advanced Grand Ave. users, get your drink on at Applebee’s and then eat upstairs at either Culver’s or Rocky Rococo. Then, if it’s wintertime, finish your adventures with the sobering sounds of the Leonard Bearstein Orchestra.)

11. Whole Foods
Forget about drinking at a grocery store…when did eating at a grocery store become a thing? Who knows, but giant chains like Whole “We’re Really Sick Of That ‘Whole Paycheck’ Joke” Foods have certainly hastened the acceptance of the eating-while-shopping trend. The Earth may be dying and the foundations of our civilizations crumbling, but at least we can now buy some gluten-free, GMO-safe, free-range eggs for $7 and nosh on some mashed potatoes from the hot bar in one fell swoop. Oh, and buy a single beer from the beer department and drink it in the store, which is something we did recently at the Prospect Avenue Whole Foods, even though we’re not sure we were supposed to.

12. Noodles & Company
Noodles & Company is not good. Somehow, though, the faux-fancy fast food franchise has grown immensely, despite specializing in cuisine that’s not particularly much worse than some macaroni-based abomination that even the most stereotypical just-divorced dad could whip up. The presence of alcohol surely helps. When faced with using that Noodles gift card you’ve had forever or risking overdraft in the days leading to payday, remember that the carbohydrate conglomerate offers such local brews as Miller Lite and…uh, maybe Spotted Cow to chase that artisan asiago penne or whatever. When the flood of 2010 marooned us on the upper east side, we dried off and got more than a few weird looks when we ordered three bottles of beer and nothing else while we waited for the streets to clear. That was our last time at Noodles & Company.