Like any literate pizza-eater who grew up anywhere near a Pizza Hut restaurant, I was happy to recently hear the pizza franchise was instituting a “Book It! Alumni,” as part of the reading program’s 30th year of rewarding education with overindulgence. Aside from the pang of bittersweet nostalgia the reminder of Book It! brought me upon learning of the news (as a result of reading it somewhere, coincidentally!), I was also struck with a familiar feeling: a hunger for pizza.

Utilizing an old AOL email address that now functions solely as a graveyard for penis enlargement- and Nigerian prince-related correspondence, I wasted nary a moment to present any and all the relevant personal information to the international pizza corporation’s Internet database. Before you could say “Yum! Brands, Inc. subsidiary” I joined the elite group of people who possess at least one valid email address and who lack even one morsel of shame in regard to retrieving a carryout order of an off-menu item intended for children. But you can just call us “Book It! Alumni” if you’d like.

Though my star-emblazoned Book It! pin—the representative trinket commemorating my tenure on the rails with The Boxcar Children, my proximity to Matt Christopher’s tales of sports triumph, and the incalculable Goosebumps delivered to me by the pen of R.L. Stine—is likely now the thrift store score proudly affixed to the messenger bag of some 14-year-old with a side-mullet, I was officially back in Book It!, baby. I must say, it felt good to be part of something larger than myself again. Still, when I glanced at my confirmation email and the promo code that entitled me to one single-topping personal pan carryout only pizza from a participating Pizza Hut by October 10, I couldn’t help but feel my membership wasn’t quite official yet.

I literally grew up with Book It! We were both born in 1984, and each of us peaked in popularity around 1995. Between the bounty of Shakey’s tokens for A’s and B’s and the promise of pizzas-for-pages brought on by Book It!, the subtle bribe of an inorganic food-like product was a pivotal tool in my elementary education. Though I doubt either program really helped me obtain an English degree (not having the grades to qualify for the journalism program did that), the incentives probably didn’t hurt. Out of respect for these formative—both educationally and love handle-wise—programs, I feel I have to fess up to something. In the past, I occasionally enjoyed Book It! pizzas obtained through falsifying documents. Rare as these instances of skimming—or flat out skipping—young adult literature were, I knew I couldn’t enjoy my Book It! Alumni prize in good conscience without first setting things right.

I meekly entered the Bay View branch of the Milwaukee Public Library during what I felt would be a slow time of day. Sadly, the children’s department was just full enough to solicit a few curious (or just plain creeped out) glances in the direction of the shabbily-dressed bearded dude with gray hair who had no child in tow. Sensing the awkwardness of the situation, I hastily nabbed the first Y.A. book I vaguely knew: Mary Rodgers’ Freaky Friday, reissued in paperback to mark the 2003 film starring Jamie Lee Curtis and Lindsay Lohan. Why Freaky Friday? It was short with wide margins and a massive font size. A mere 168 pages of predictable prose that has twice inspired unsatisfying motion pictures were all that stood between a liar’s ill-gotten meal and a real reader’s reward. So I read.

As I apprehensively digested the shitty role-swapping storyline I’d successfully avoided both times in film form, it dawned on me that some of the same lessons 13-year-old Annabel Andrews was learning whilst encased in the body of her 35-year-old mother Ellen Jean Benjamin Andrews were currently applying to me. In fact, I was straddling the line between child and adult with the practice of reading the book itself. In order to enjoy the renewed flavors and sensations of my youth, I was forcing myself to grow the fuck up and take on responsibilities to become an honest-ass MAN for once in my goddamn life.

I winced through the inordinately sophisticated dialogue of a 13-year-old. I grimaced as Annabel endured such insipid difficulties as having braces and being told she was too smart in school to explain her poor grades (while completely glazing over the possible hardships of BEING IN ANOTHER PERSON’S BODY WITH NO IDEA WHEN SHE WOULD REVERT TO HER OWN). I was put off when the author wrote “and unless you’re a total retard, you can usually figure out what you’re supposed to say” (page 146) in a book that was on the kids shelf at my neighborhood library. I shook my head when the male lead “Boris” was revealed to actually be “Morris” all along but had his pronunciation marred by stuffy nose until there were two pages left. I scoffed when Ellen admitted to causing the body switch, only to never explained how or why she did it, and was never questioned by her daughter. Finally, I finished Freaky Friday and could order my pizza.

As I finalized the online order for the pepperoni personal pan pizza I’d earned the hard way, it dawned on me…I was an adult. Sure, I could still enjoy nice things (like when Ellen—as Annabel—skipped school to drink coffee and read the New York Times at a French cafe), but I needed to be responsible in doing so (like when Annabel—as Ellen—played crazy eights with her hated brother “Ape Face”). At the last moment, I substituted the oh-so-slightly healthier grilled chicken on my pizza in place of pepperoni. Much like my decision to read Freaky Friday, it wasn’t easy to do and it still wasn’t particularly good for me, but I felt it had to be done to restore balance. As I ate my first and likely only Pizza Hut personal pan pizza as born again Book It! member, I can honestly say no pizza has ever tasted better to me. 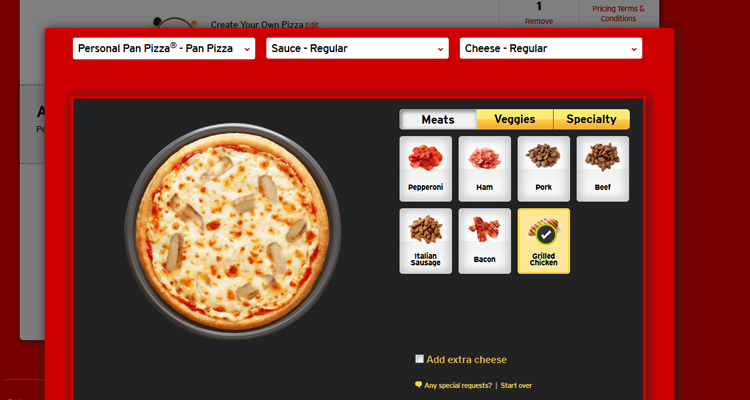