The last time we dropped by the ever-emptying Shops of Grand Avenue, we said goodbye to Boston Store. A few months before that, we paid our respects to the recently closed Rocky Rococo. Only four restaurants remained in the third-floor food court at that time: a Qdoba, a Panda Express, a Subway, and that Tomato place that sells wraps or whatever. Now, we have the solemn duty to inform you that that number is down to three. The Grand Ave. Subway appears to be closed for good, too, leaving only Qdoba, Panda Express, and that Tomato place that sells wraps or whatever. This is truly the end times, folks.

Oh god, what’s the point anymore? Even Subway doesn’t give a shit, as evidenced by these signs that redirect potential sub-eaters to their downtown cafe location, and apologize for “inconveniency.” A typo or a purposeful use of an archaic form of “inconvenience”? Only the Leonard Bearstein Symphony Orchestra knows for sure. 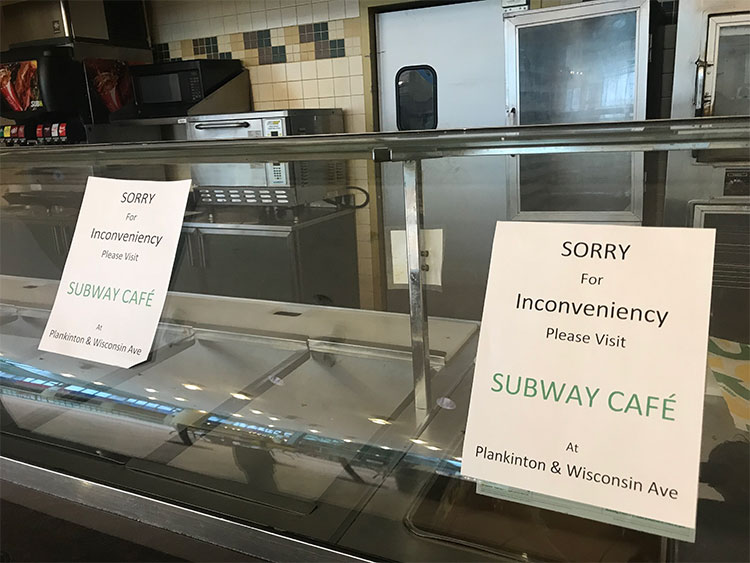 Like everything in Milwaukee these days, the Shops of Grand Avenue aren’t really dying—they’re just changing. The mall’s Plankinton Arcade is being transformed into apartments (just imagine living in that former pen shop!), and the mall’s owners have been teasing a “food hall” for the first floor. The current food court will likely be converted to office space. These plans, it should be said, have been floating around forever. Oh, and that barber who ran for mayor is gone, too.

RIP Subway and everything else. Also: place your bets on the final food court survivor. Our money’s on Panda Express.