Three facts: 1. Should a sleuth of real bears gather at the center of a mall, people would scatter in terror. 2. No self-respecting human symphony could be denigrated into playing among the clamor of a shopping center. 3. Robots are on a covert, bloodless rampage to bring unfathomable oppression to our already whimpering planet.

Yet, take components of all three—bears, orchestra, and animatronics—and you’ve got the seasonal attraction that is the Leonard Bearstein Symphony Orchestra. From Thanksgiving until the week of Christmas, this animatronic animal band will play approximately 423 shows of Christmas music exclusively at the lobby of the Shops of Grand Avenue. On output and consistency alone, this makes it, without a doubt, the hardest working band in the city, provided no one kicks out the plug.

This past Saturday, I came to see the animatronic orchestra perform an early show. This is my review. 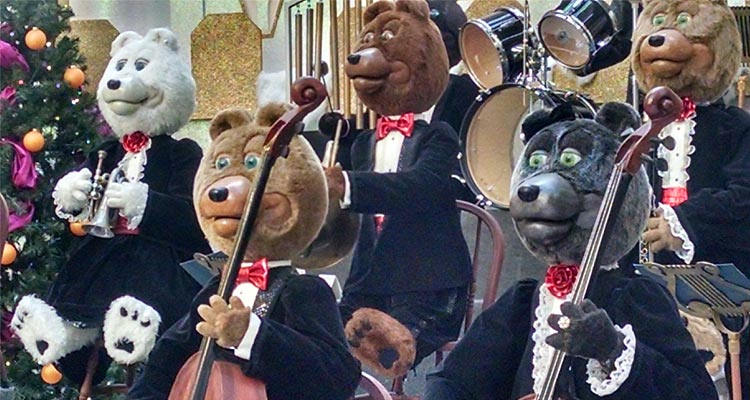 Even at the best venues in town, one can expect a buffer between the time on the flier and when the music really starts. But this animatronic band—and I’m guessing every animatronic band—starts exactly when the flier states. The bears run on a timer, explained the patient Guest Services manager for the mall. Professionals, these bears offered no sign of life ahead of the machine-like performance-to-come. A father floated an explanation on their stillness to his toddler daughter that wavered between “Why won’t the iPad work?” and “Why isn’t Patches breathing?”

Then, a bell rang through a P.A. speaker, a bear’s lower jaw dropped, and a woman’s voice put the crowd of five on notice: “Three minutes, maestro.”

As I stared at the serene bears, anxious for them to come to life as a doll might in a gore flick, it suddenly happened. At precisely 11 a.m., the 18 members of the Leonard Bearstein Symphony Orchestra began to nod and bob and nearly play. Under a white and silver coat, Leonard jerked his arms to prompt the energetic best out of the band for openers “The Most Wonderful Time Of The Year” and “Rudolph, The Red-Nosed Reindeer.” From there, it was thematic, with a trio of songs about and featuring bells, then a couple of Santa numbers. There was just one distinctly religious tune, “Do You See What I See?” though it seemed the result of programming for this particular set more than a strategic affront in that oh-so important of battles, the War On Christmas.

In all, the Leonard Bearstein Symphony Orchestra plays the Christmas songs you know. For any performer, this is no great surprise, with the average age of the most frequently played holiday songs hovering around 61 years, according to the December issue of Harper’s. Compared with the brand new, slick, and highly processed Homo Sapien Christmas songs pumping through the TJ Maxx on the other end of the mall, who can blame Leonard and his fellow Ursus for sticking with the classics? As the plugged-in maestro put it in a transcendent bit of banter: “Who knows where music really comes from?”

The origins, who knows, but the sounds, on this Saturday morning, came from amps, in front of a pretend castle, surrounded by gifts and a sleigh, all mimicked via fuzz-covered electronics. Although pre-recorded, the voices were, at some time, human, as evident in the richness of Leonard’s voice in an ode to winter before “Frosty The Snowman.” There were also inflections distinctly human, like the coy flirtations by back-up singers Ella and Bubbles (the “effervescent” Cub Sisters) with their bandleader. Ella and Bubbles, along with massive wimp Bentley, are proof that studio musicians you’d never be able to name can form a solid group of singers, even if it is through the vehicle of an animatronic den animal.

Leonard, the leader and source of the Cub Sisters’ attraction, refrained from singing except for once during the set, in a bebop interjection after “White Christmas.” When the song closed—but before the brief shutdown of lights and bears between each track—Leonard explained: “I love Bing Crosby. I love Irving Berlin. I love snow.” One could wish that the last “love” was less about winter precipitation and more about the Juno award-winning rapper from the 1990s, though little in Snow’s canon would indicate a tie to Christmas, Hanukkah, Saturnalia, or Kwanzaa.

Aside from singing, the group has two premier soloists, one gaudy and awkward, the other a jolt of life and humor from the horn section. Gene, the drummer, has the look of your small-town, self-professed musical wild man, the clueless poseur who gigged back in the ’70s and presently shares tortured stories of his conquests in the back of the rock music shop. His isolated moments are rambling. Percussion of importance is performed by Gene’s wing-bears, on the bells and a child’s drum set tam. Also, animatronic technology appears not to have progressed to the point where it is functional for Gene’s rigid arms to make contact with the snare or hi-hat.

William, or “Wild Bill,” is the true loose cannon, a trumpeter who pulls out the tunes from the orchestra’s sometimes foggy instrumentation and carries the melody in a frequent battle with V100.7 blurting from a jeweler adjacent to the stage. When animatronic bear jokes risked falling flat, Wild Bill was there with a plunger mute to satisfy some corny quotient.

Leonard, to his credit, acknowledged Wild Bill’s performances, especially in early numbers like “Rudolph.” In fact, Leonard acknowledged the entire band, over and over. No less than four times in the set, Leonard introduced the band as “musicians of the finest caliber” and welcomed the audience to the show, with the same delivery.

Performing since at least the late 1990s, the Leonard Bearstein Symphony Orchestra runs under the operation of a wedding DJ outfit known as Spintastic Sounds and animatronic maestro Todd Alexander—“the only service and installation tech” over the last 15 years for the orchestra, according to the Spintastic site and social media pages. (They also operate Beatrice the Storytelling Bear, Sophie the Storytelling Rabbit, and The Chuckles Quartets, formerly The Bubba Bears.) Milwaukee seems the outlier of the Leonard Bearstein tour itinerary; other gigs are at malls in Colonial Heights and Roanoke, Virginia, and Goldsboro and Charlotte, North Carolina. This frantic, geographically challenged annual tour is not without its perils, according to a lightly cryptic post from 2014 on the Spintastic Facebook page: “NOTICE! DECEMBER 4TH EVENING SHOW(S) AT CHARLOTTE’S Bank Of America Founders Hall Location WILL NOT BE CANCELLED ENTIRELY.”

Back in Milwaukee, where the shows run on the hour “entirely,” the orchestra rounded out its Saturday morning set with another introduction of the band and then a sweet rendition of “Merry Christmas.” One woman turned to a stranger and said, “I feel like I should clap.” A family walked to the mall directory, then the escalator. A teen remained entranced by her phone. The antsy kids and cheerleaders who had all sat and smiled, front and center, during different blocks of songs by this time had cycled through to GameStop, Foot Locker, or the airbrushed T-shirt shop. The “whimsical” visuals promised on the show flier at the escalators near Stone Creek Coffee really did continue to captivate children, a few songs at a time. The bears came to a rest for 10 minutes until 12 sharp.

I returned to the Guest Services station to ask about the Leonard Bearstein Symphony Orchestra CD advertised during the show, highly interested in the disc’s deep cuts or originals. The manager shook her head and offered a “no” in the form of a phrase of historical pragmatism:

“That was thirteen yeeeeee-ars ago.” 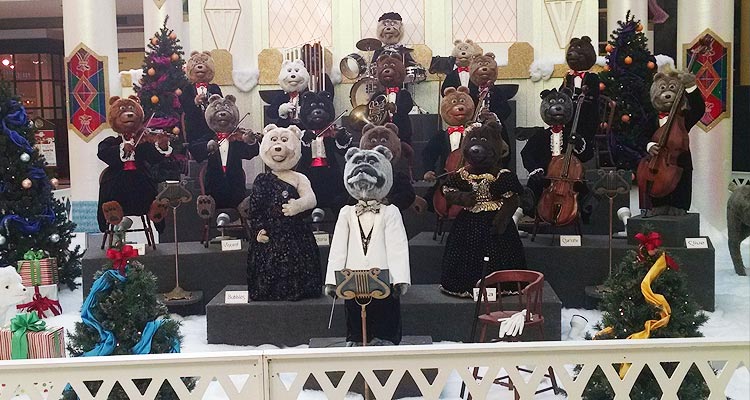 By noon Saturday, dozens of families had congregated for lunch before pictures with the mall’s main holiday attraction, Santa Claus. Outside, a few dozen bicyclists in Santa costumes and other seasonal outfits, including just a whole bunch of fir branches, circled downtown as part of the Santa Cycle Rampage. On the Route 15 bus, there was a bearded man who may have been on his way to play Santa at another shopping center, and another grimy can collector who could live in a den. Two toddlers grasped at the same wrapped candy cane.

It could be the jaded edge from attending hundreds of shows over the last two decades, but for me, the Leonard Bearstein Symphony Orchestra provided a unique, enjoyable, and odd show. Plus, there were no Christmas songs jackhammered in a loop in my head afterward. Rather, what popped in was a pre-programmed piece of crowd work shared during the set by the maestro, Leonard Bearstein:

“It is within your heart that the true meaning of the season resides. Wouldn’t you agree?”