Blade has one of the best opening action sequences of all time. (Chances are, if you’ve seen the movie, “Confusion” by New Order is already playing in your head.) It introduces the daywalker wordlessly. It sets up the hidden world of vampires. And yes, it shows the titular character kicking a lot of ass in a sweet black trench coat.

I was in college at UW-Whitewater when Blade was released in 1998. My friend who worked as a projectionist in Milwaukee called me on opening night, Marvin Berry-style. “Dude!” he yelled over the clack of the projector and the thump of the song’s beat. “You have to see this movie! It’s straight out of Vampire!”

It was the culmination of a six-year-long dream of me and my friends. We were all fans of the ’90s role-playing juggernaut Vampire: The Masquerade. If Dungeons & Dragons took its cues from Lord Of The Rings and Conan, Vampire was inspired by Interview With The Vampire and The Lost Boys. It had a sourcebook set in Milwaukee that wasn’t very accurate, but it blew my teenage mind that there could be vampires in my hometown! Skulking around Brady Street! Buying things at Southridge! Hanging out on the Goth Rocks!

There were plenty of shows in the ’90s trying to capture the vampire zeitgeist. I loved Forever Knight. I felt betrayed by Kindred: The Embraced, the official show based on Vampire created by the liver-spotted hand of Aaron Spelling. Blade understood what I loved about that game. Political clashes between sects of vampires. Hard-hitting comic book action scenes. Moments of angst sandwiched in between. It was a little bit ridiculous and a lot bit cool. And it came at just the right time for me.

I was in a transitional time in my life. I spent a lot of time running Vampire for my friends in high school. It helped me build friendships. My first relationship. My confidence in my abilities as a creative writer. I spent hours pouring over those books and scribbling in notebooks to create an experience like a TV show for my friends. Eventually I started writing cold opens and printing them out for everyone to read. My mom’s basement, nerdy as it might seem, became a central hub of teenagers because they knew we’d be playing Vampire on Friday nights.

But then all of that was gone. I moved to Whitewater to strike out on my own, a little bit, even though I could come home on the weekends. My friends were off having their own college experiences, and those feelings of being at the center of a circle of friends were fading. I took my friend’s advice, came home, put on my old Malkavian Clan t-shirt, and watched Blade. Then I went back to see it again. Then again. It relit my love of the game. Now, thanks to new-fangled DVD technology, I could show that scene to new players in a matter of moments. I could rebuild my empire. And I did. I ran two more games of Vampire in college. Games that once again led to friendships. More relationships. And switching majors to English with a creative emphasis.

I originally went to college for psychology. After a semester without any classes in that major due to some scheduling screwups, I realized I didn’t miss it. If I was going to school for something, it should be something I would miss, yeah? English classes were that something, and I changed my major. I knew in the back of my mind that I didn’t need to have an English degree to do the writing I thought I would be doing. They wanted me to publish short fiction and poetry in literary journals. My advisers wondered why I was wasting my time with these stories about vampires and fantasy. How would that get me on a teaching track with my summers off to write?

Here I am now, writing about vampires while nearly everyone I know who got a journalism degree is out of the field. Which isn’t to say they never tried; that was a dicey way to make a living 20 years ago and it hasn’t gotten better. Even this fine website rose out of the ashes of another. What my college experience taught me was to value my work in the face of blind criticism. Getting back into Vampire put me back to work on a regular basis. Every week it was time to tell stories whether I wanted to or not. It’s a lot like facing deadlines out in the real world. Like going to the gym for your brain.

Seven years ago, in 2015, I was in another transitional moment of my life. I was working on my comic book after years of writing for other people’s role-playing games. I knew my daughter was on the way. My mom had beaten cancer, and to celebrate we were going to New York Comic Con together. A strange email got my attention.

A company called BBQ Films apparently did “experiential” film screenings. Beyond just showing the movie, they wanted people to feel like they were in the movie. As part of NYCC that year, they were doing a concert with The Crystal Method that was inspired by Blade. I had to go. They had to do the blood rave, right? There would be a riot if all those people didn’t end up covered in presumably fake blood.

That’s how I ended up on the streets of New York during Comic Con, squeezing into my tight-fitting old Malkavian Clan t-shirt for one last night in the World of Darkness. The club hosting the screening had one of the famous vampire glyphs projected on the building. I went inside, not quite sure what to expect. 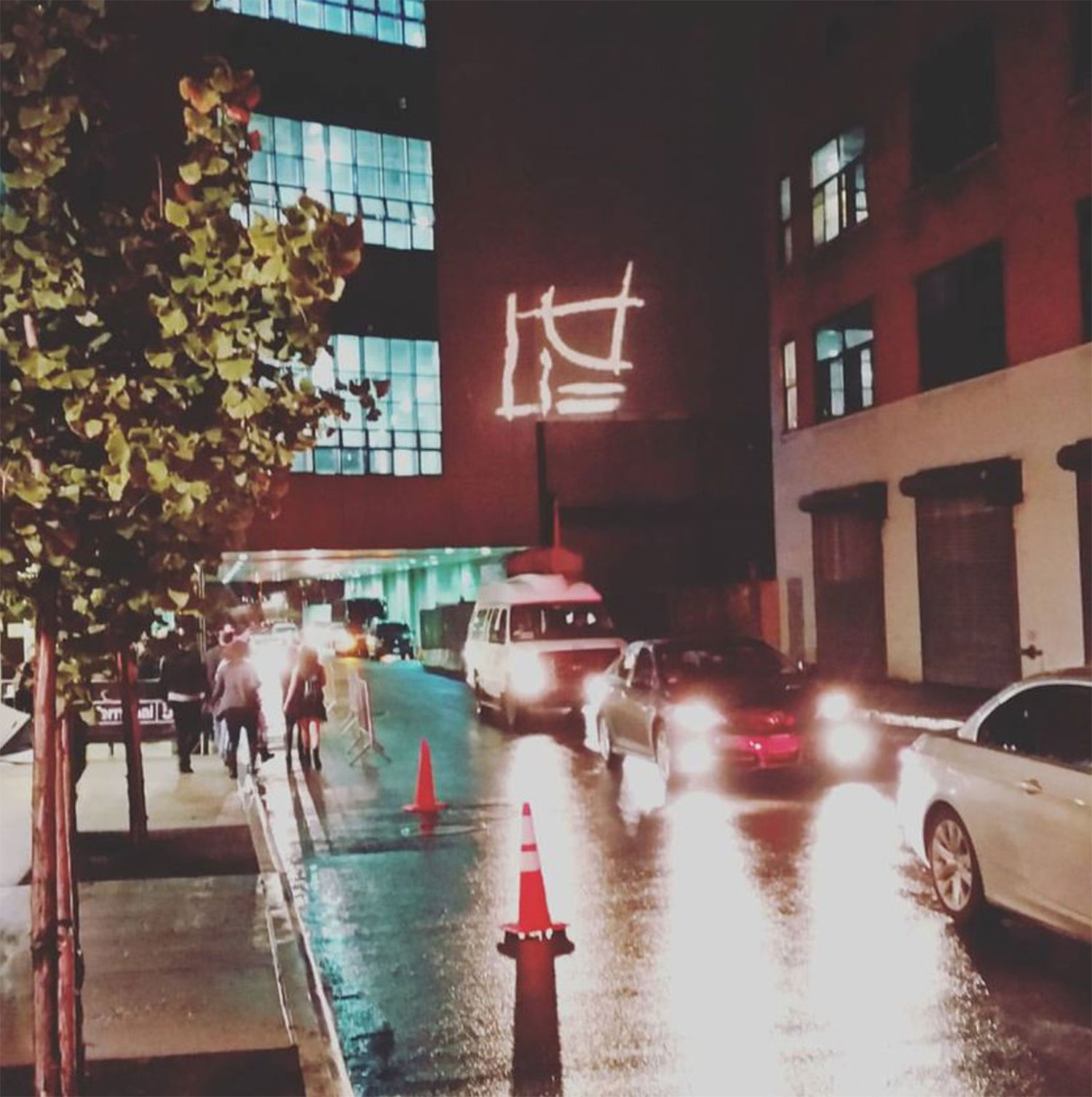 I ran into old friends from the East Coast Vampire LARP scene. Made new friends with some financial bros who told me even their sector didn’t have good jobs anymore. There were a lot of trench coats, several Blade cosplayers, and fetish outfits that made me wish I had taken more pictures. 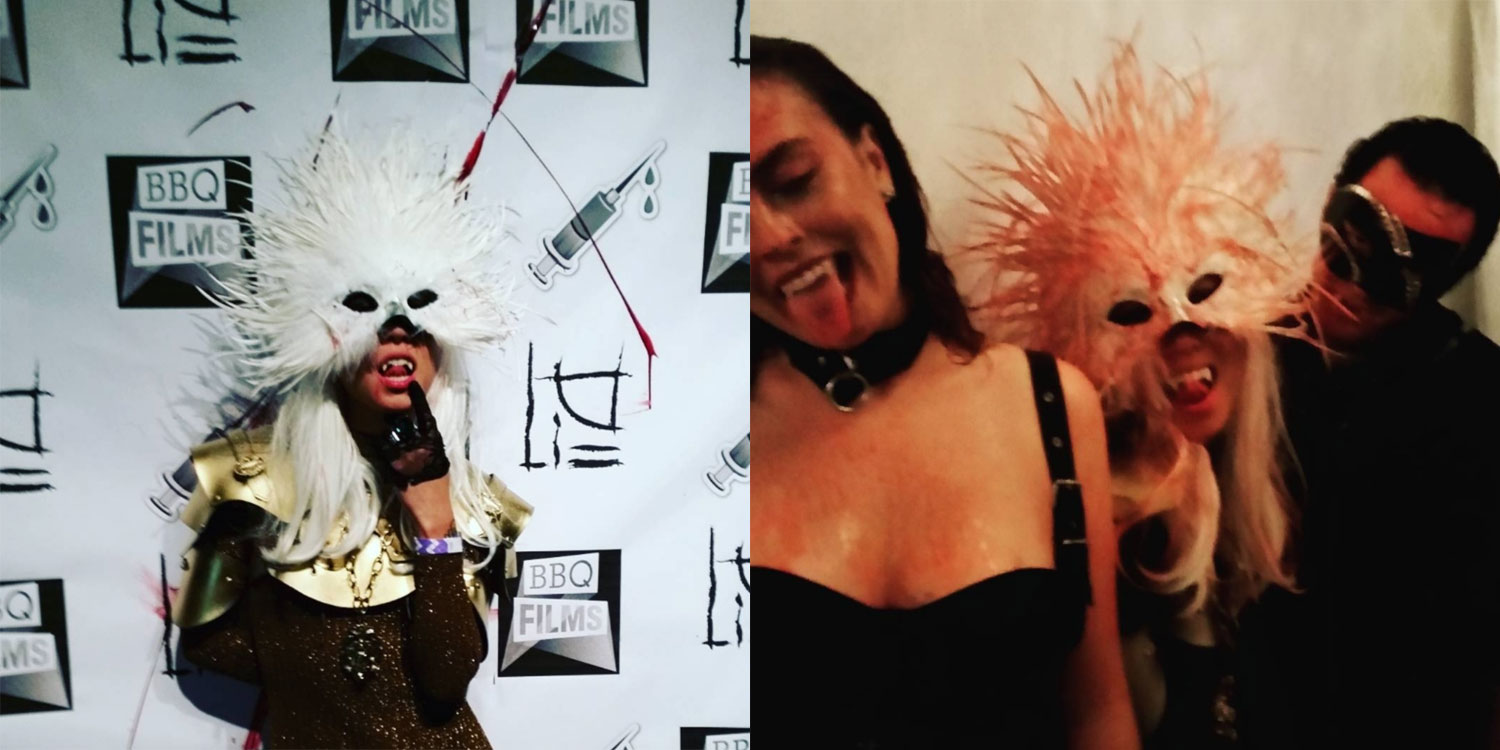 It soon became clear that the concert, rather than the screening, was the main event. It took place on a part of the rooftop I would have totally missed were I not exploring the building. Finally, after some actors played out a few fan fic scenes of Blade, The Crystal Method took the stage. That was the signal. The blood rave was coming.

The Crystal Method played some of their best stuff to open. I was a fan, so I took some comfort in knowing that, even if the blood didn’t come, I was still seeing one of my favorite bands live. After about 45 minutes, the familiar beat started up. I pushed deeper into the dance floor. I raised my hands just like the vampires did in the movie. The blood washed over me. Over all of us. We laughed, yelled, hissed, and screamed. We knew that we were safe from Blade. This time. 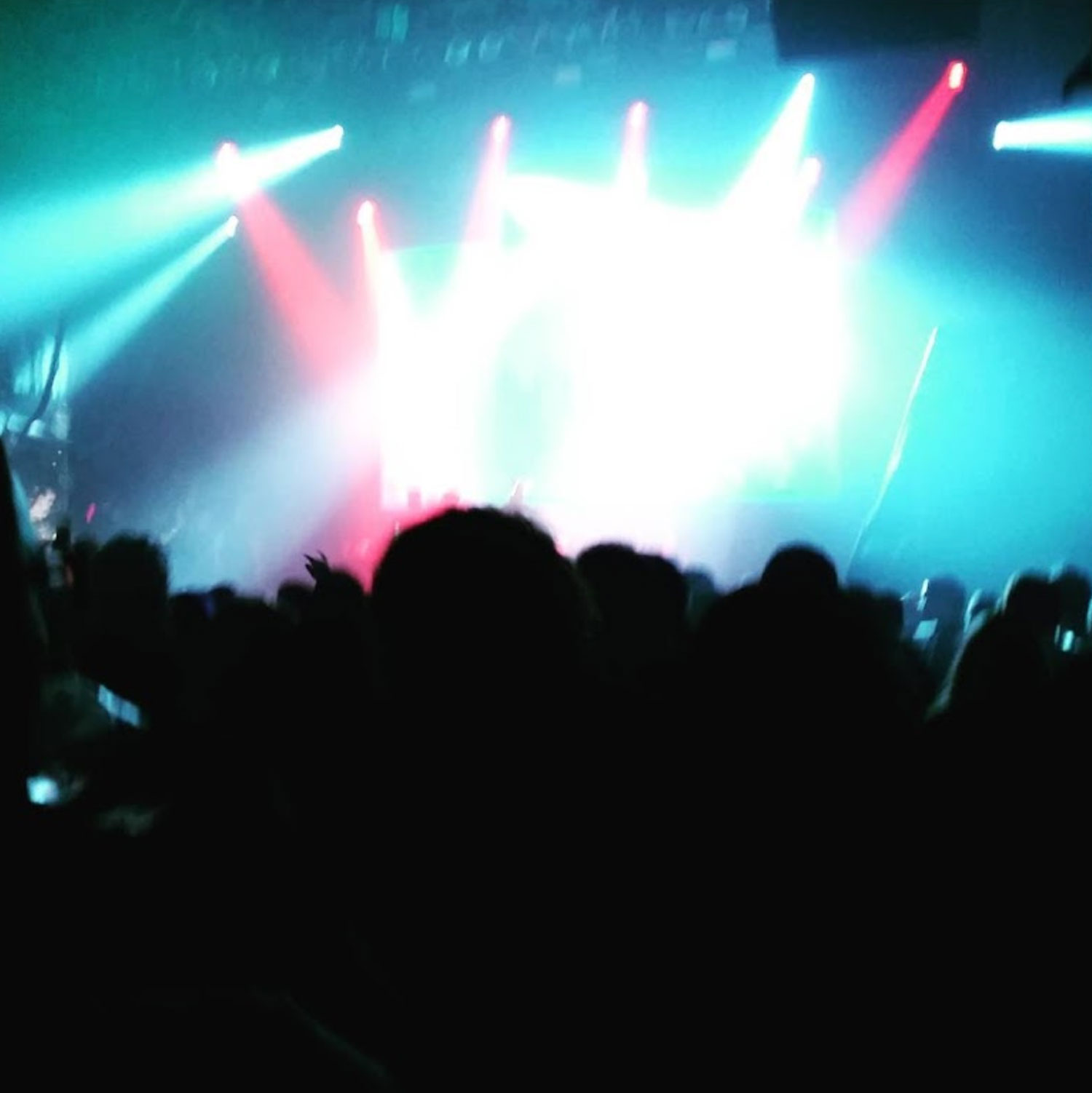 How did they do it? The answer was actually pretty mundane. They covered the dance floor in old rugs. They set up about a dozen people on chairs wearing those backpack-mounted weed sprayers filled with a fake blood mix. They turned them on at the proper cue and sprayed until they ran out. I imagine the stage crew folks that hosed us down were having as much fun in a different way.

The concert ended soon after that. I stumbled out into the night, hailed a cab, and went back to my hotel. As I sat inside, I thought two things. First, it was frighteningly easy to get a cab in New York at 2 a.m. while covered in fake blood. Second, I felt…great. All the fears and uncertainty that I was going through were washed away by gallons of fake blood. Thinking for just a few moments I was one of those cool-as-hell vampires on screen. My Malkavian shirt was wrecked, but that was kind of the point of wearing it. After all those nights in mom’s basement, all those nights running a game until we were all falling asleep at the table, all those LARPs, wasn’t this the best way for it to go out? 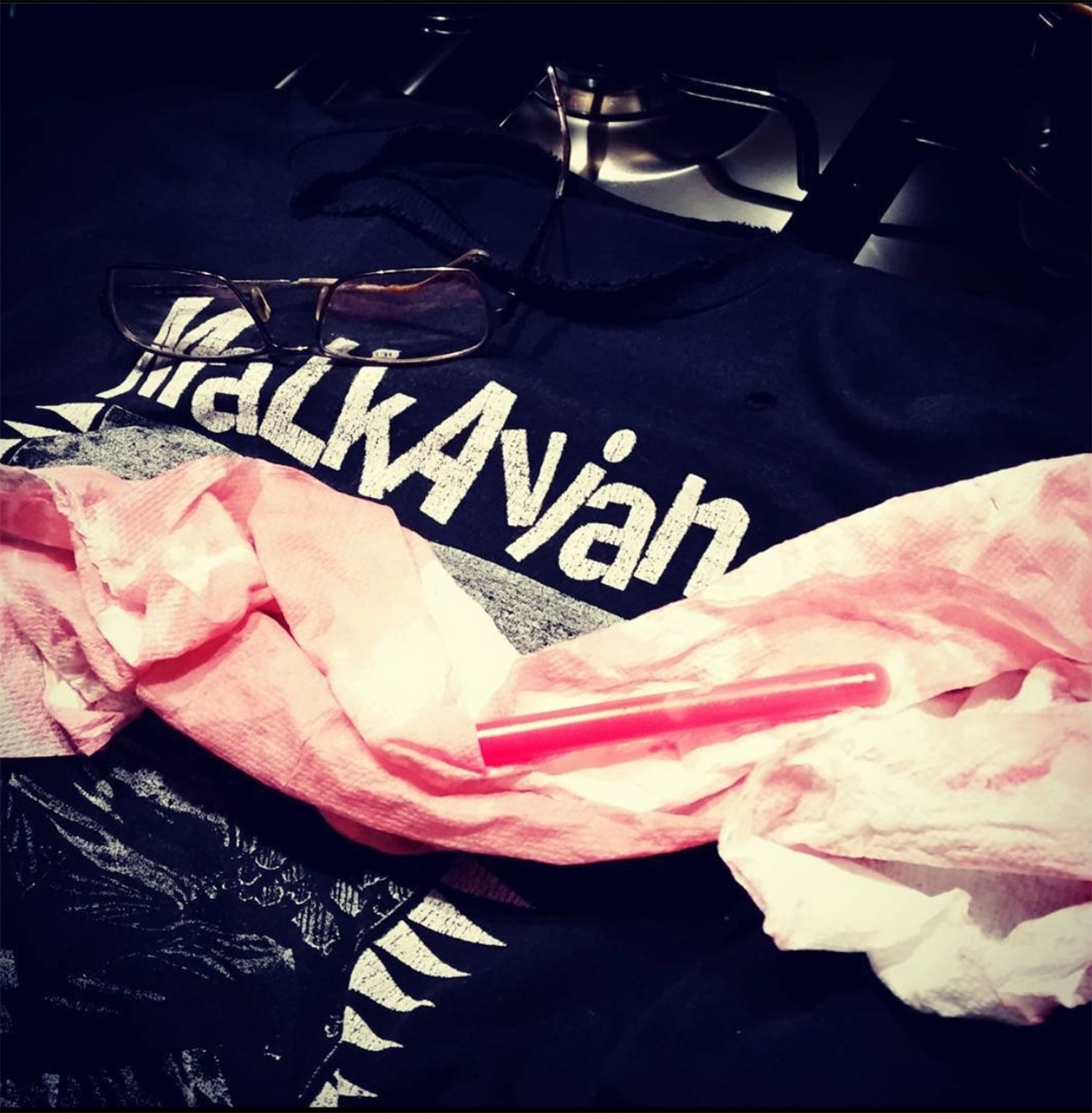 Not many people get a chance to feel closure in a chapter of their life right away. Usually it’s years later, looking back, when people realize the shift from one phase to another. The blood rave was a proper sendoff to some turbulent post-college years. I was ready to strike out on my own as a writer, as a father, and whatever other roles came my way. I was ready to take the next steps because I had lived the ultimate experience of that part of my life. Like so many important moments of my life, it was messy, it was silly, it was awesome, and it was profound.

I still play Vampire: The Masquerade on occasion. I don’t have as much time to do it as I once did, but it’s still nice to slide into that darker world, if only to go to a place where someone seems to be in control. Even ancient vampires pulling the strings of conspiracy are more comforting than the chaos outside my real-world window. Whenever “Confusion” comes on my playlist, I find myself smiling that same smile that Blade smiles in the opening of the movie.

While I doubt the Avalon will have its own blood rave on June 29—the seats are too nice, for one—that opening segment is still one of the best. 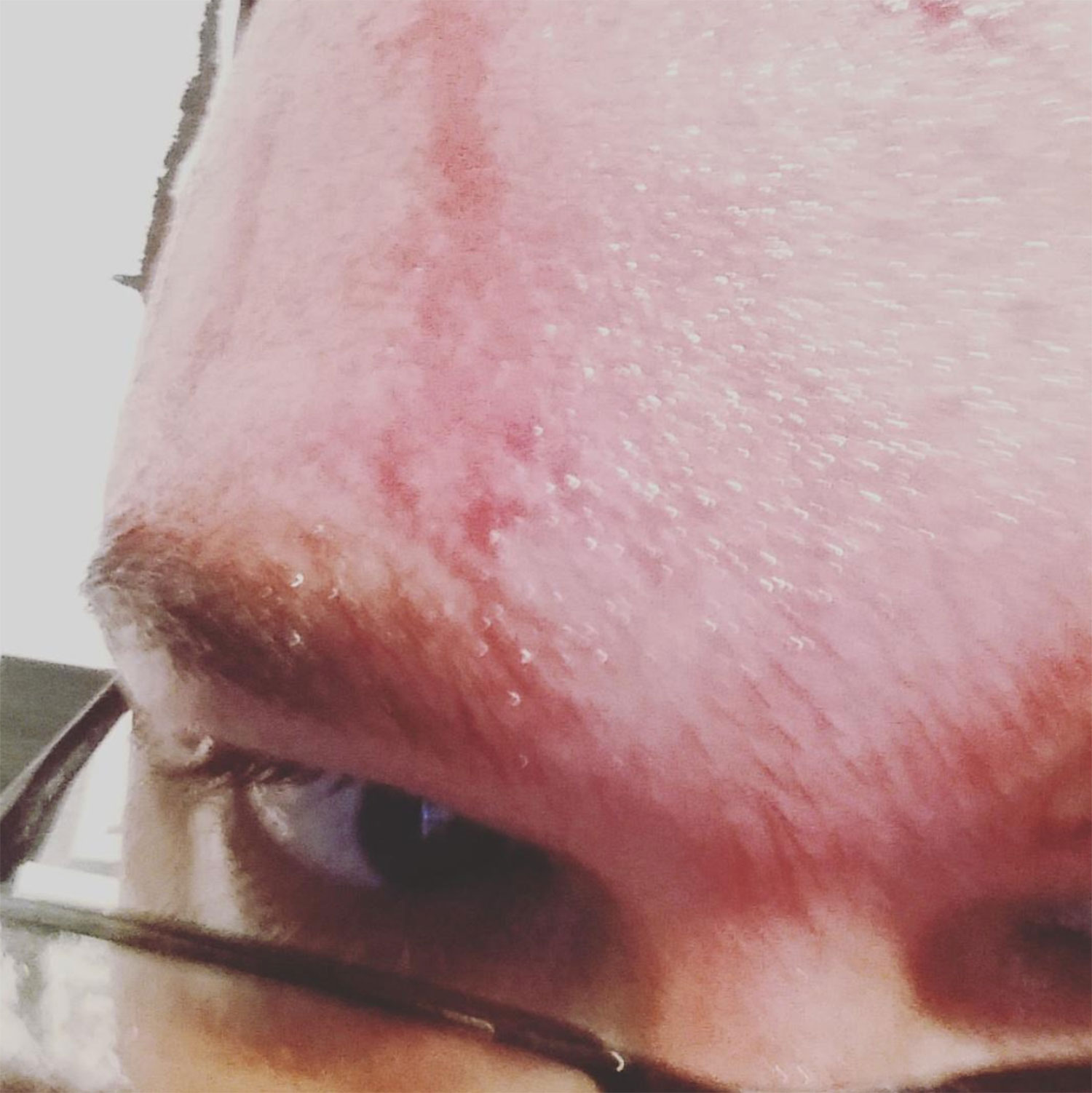