My brain is my biggest enemy. For as long as I can remember, I’ve been unable to exist completely in one moment. I never sit back and enjoy something for what it is. I can’t start a task without being sidetracked at least once, oftentimes much more than that. I stay up late and wake up early. I reflect on and question my recent actions or decisions, while simultaneously doing the best I can each day, and making both short and long-term plans for the days ahead. These are generally positive attributes for running a business, but my over-analysis and distracted tendencies don’t clock out at 5. They don’t take weekends off or go on vacation. My mind doesn’t stop.

Of course, living at a time in which the “convenience” of technology also puts all the responsibilities and stresses of modern life at your fingertips at all moments doesn’t exactly aid the relaxation process. Between my personality traints and carrying my entire social life, job, and whereabouts in my pocket, it’s been pretty much impossible to tune out the din of distraction and simply just be. The underlying goal of these semi-monthly columns is to try to quiet the noise, clear the fog, and fully lose myself in an experience before returning to the chaos and confusion that is everyday existence.

The most frequent question I get about ’18 And Life To Go is, “Are you going to Float?” I’ve been interested in floating in a sensory deprivation tank ever since Float Milwaukee opened in 2015. When my Milwaukee Record counterpart Matt Wild wrote about his experience at the Walker’s Point business, my interest grew even more. I wanted to, quoting Matt’s article, feel something “strange, relaxing, exhilarating, perplexing, too long, too short all at once.” But for $75 an hour, I felt I could wait. When money is a source of stress, can serenity really be achieved for $1.25 per minute? A gift card I’d received for my birthday helped ease the worry about this experience’s worth, but since we’d covered it on the site before, I wanted to get a few more of these columns under my belt before drawing from the same well again.

However, a recent idea fell through and I got really busy, so I figured there was no better time to finally put the certificate to use than now. And no, the irony of forcing a relaxing experience into my life in order to meet a self-imposed work deadline is not lost on me. Whatever. Last Friday afternoon, I stepped away from a pile of work, put my phone on Airplane Mode, and went to Float Milwaukee with the hope of closing myself into a plastic pod in order to open my mind. 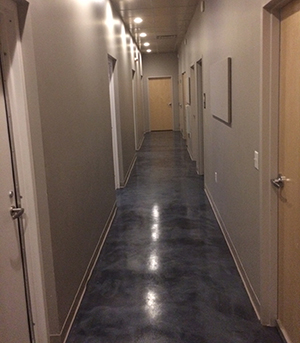 The disoriented feeling first struck me the instant I walked into the building. There, I was met by two employees who greeted me by name, told me to take off my shoes in favor of rubber sandals, then started asking me questions (“Is this your first time floating?”) and rattling off details before I could even get to the front desk and speak. I had a chance to settle a bit when it came time to fill out the liability waiver that felt the need to tell patients they were not permitted to urinate in the pod they were occupying. There’s always a catch!

After signing the document promising I wouldn’t sue nor piss all over myself, I was brought down a long, narrow hallway. Each room was a private floating area with its own pod. It was somewhat reminiscent of one of those movies set “in the not-so-distant future” with humans vulnerably locked in sleep chambers. I was about to embark on an hour of isolation, while up to seven other people were also isolated within 20 yards of me. A group of isolation chambers seemed like an oxymoron to me.

My room was at the end of the hallway. It was small, white, seemingly sterile. At least I hoped it was sterile. There was a bench with towels and earplugs, a shower head mounted on one wall near a floor drain, and about half the room was occupied by isolation chamber—my home for the next hour—radiating an artificial blue glow that managed to be both soothing and unnerving at once. I was told the pod was filled with about 10 inches of salt water. I was instructed to shower before and after my time in the tank, and told floating nude offered the best benefits. I could put in ear plugs and use the foam neck support if I wanted. I was shown the light and sound controls, then instructed I should float with the lid down to keep the water around 94 degrees. The employee said I should turn off the light in the room. I shouldn’t touch my face. I should cover any open cuts. And like 10 other things. After enduring the litany of rules and other necessary information for five minutes, I was finally left alone to try and get some peace of mind. 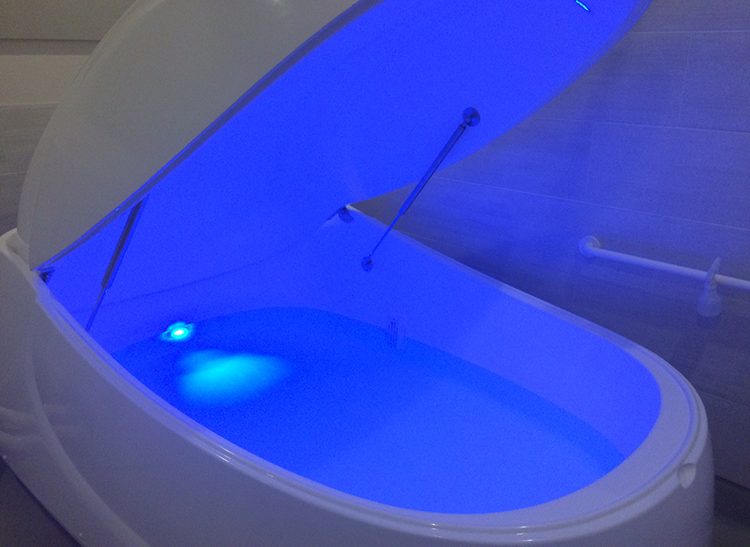 I removed the rubber sandals, disrobed, and quickly rinsed off. I was on the clock now, after all. I clumsily entered the tank and tried to dip in on my back without getting salt water in my eyes. Succeeding, I closed the lid, only to remember I’d left the light in the room on. Did it really matter? While pondering how light that wasn’t blue would impact the quality of my float session, I decided a little neck support wouldn’t hurt, so I got up to get the foam thing and turn off the light. Finally, about 15 minutes after I’d walked into Float, I could try to reap its alleged benefits.

I repeated the awkward, unnatural pod entry (with perhaps a little more skill this time) and shut the lid, determined to stay there until my hour was up. I was buoyant and there was more than enough room on all sides of me. I took a few moments to get comfortable, then I hit the music button, which played some ambient eastern-influenced sounds suited for meditation. I turned the light in the pod off. Then I turned the music off. Without light or sound, I quickly realized I could hear myself blink. Each time my eyes shut, it was like a bass drum was being stuck in some distant corner of my head. It, coupled with my steady breaths, seemed to work in concert and forge a rhythm. Meanwhile, the darkness in the pod seemed to narrow down to a pitch black point, then splay out again. I didn’t know what I was expecting to experience here, but it was working. 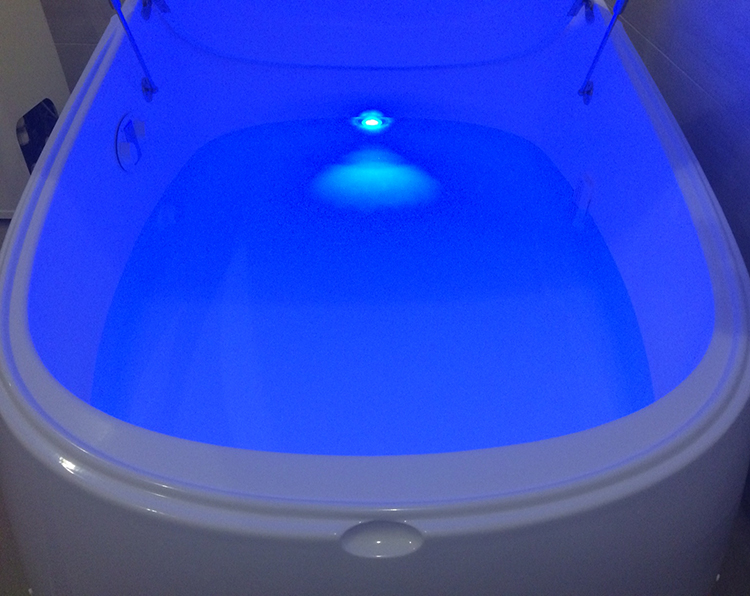 Admittedly, other thoughts didn’t stop as all this was happening. I thought of a text chain I was engaged in moments before I walked into Float and how the information I learned would impact turnout at an event I planned. Not expecting the preamble prior to the float session, I wondering if I’d parked in one-hour or two-hour parking. I thought about my plans for that night and that weekend. I questioned how I’d be notified my time was up and if I’d even hear the notification with my ears beneath the water’s surface. I hoped nobody would come in and knock on the tank. I wondered how much time had passed. I thought about that Simpsons episode where Homer and Lisa did this, then Homer’s tank was repossessed with him inside. I hoped mine wouldn’t be repossessed.

Mostly, however, I wondered if I was getting the most I could out of this experience. The blue light was there for a reason, right? After some searching and an instant of panic, I found the oversized dial and turned the lights on. Without the music, I quickly took note of a slight buzz that threw off my concentration. I turned the audio accompaniment back on and decided to give that light/music combination a try for a while. What the hell, why not give it a shot? It might work if I…

The next thing I knew, I was being either awakened or snapped out of my trance by an automated voice telling me my time was up. I floated there for a few moments, stunned in the most comfortable sense. As instructed, I showered again and put my clothes back on. I turned my phone off Airplane Mode and was quickly met with a flurry of news and messages from the inhabitants of the world outside the room. I lingered for a bit in the room, less-than-enthused about the idea of returning to life among the desalinated. I felt a bit out of it and walked around with a feeling of relaxed confusion.

Of course, that feeling dissipated the moment I walked out the door. I had a work engagement to attend, errands to run, taxes to prepare, checks to cash, decisions to make, and a life to manage. My brain quickly returned to its adversarial position and life hasn’t slowed in the slightest of ways in the days since. Still, it’s nice to know that when exisence gets too noisy and the internal fog builds around me, all it takes to temporarily free my mind is confining myself in a plastic pod for an hour of nothingness.