When you really stop and think about it, it’s amazing that any of our bodies function at all. Whether you believe it’s the result of hundreds of thousands of divine miracles happening simultaneously within you or the product of millions of years of evolution and adaptation, the fact we can breathe, move, speak, eat, process and express emotions, reproduce, accomplish any athletic feat or, really, do anything at all is pretty much unfathomable when accounting for everything inside us that must work perfectly in concert to allow this confusing endeavor we call “existence” to take place. Of course, most of us don’t think about that until one of our internal instruments is out of sync with the rest of us or one damaged cog in our meat-bag of a machine threatens to stop everything altogether.

If the body is a fine-tuned machine, I’ve typically been the guy who never gets oil changes, drives on bald tires, and continues on the highway long after the “Maintenance Required” light illuminates my metaphorical interior. Unfortunately, simply buying a new vehicle and scrapping this one for parts isn’t an option in this scenario. The rust and much of the damage incurred can’t be remedied at this point, but I’m learning that with implementing small changes, I can take small steps to help the machine run better for however many miles I have left. Sure, eating better, drinking less, and exercising are obvious ways to do that, as are regular doctor visits (which I’ll eventually get around to, okay?!). However, I wanted to see whether I would notice any improvement my health and well-being if I implemented a series of small, inexpensive, and natural remedies into my daily routine. 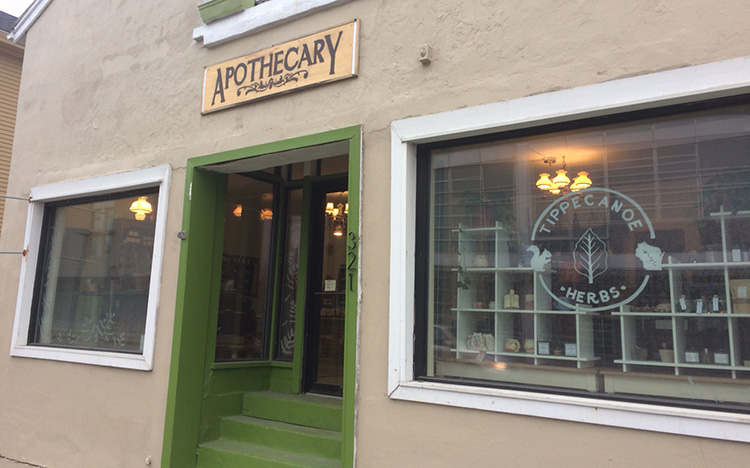 Near the end of January, my longstanding curiosity about herbal treatments—and, yes, the imprinted Western skepticism about them, too—brought me to Tippecanoe Herbs. Since 2015, the husband and wife team of Kyle Denton (of Milwaukee-Madison band The Midwest Beat) and Serena Marinelli has been selling teas, tinctures, salves, infused vinegar, syrups, and oils made from locally foraged and organically farmed plants at area markets and online. Tippecanoe Herbs opened a retail shop in Walker’s Point late last year. Prior to joining forces with his spouse, Denton studied ayurvedic medicine (methods derived from ancient India) in 2012. He says he marries his ayurvedic training with elements of traditional Western herbalism and his interest in foraging for wild foods and herbs to create products that help treat, ward off, or alleviate ailments.

He told me some of his regular customers work in the medical field, but rely on Tippecanoe’s remedies to bolster their immune system in the toxic environment. During my visit, a mother was buying her college-age daughter a treatment to help combat depression. Another customer was picking up burning sage for some type of cleansing ceremony. Denton recognizes the reluctance some have to accept herbal and holistic treatment, but he also stressed he’s not selling medicine nor a cure. He’s providing things that can aid and promote other aspects of a healthy lifestyle.

“The things I make are safe. The things I sell to the public are more considered to be foods and supplements that support health opposed to fixing things,” Denton says. “If it didn’t work [for you], it’s not the end of the world.” 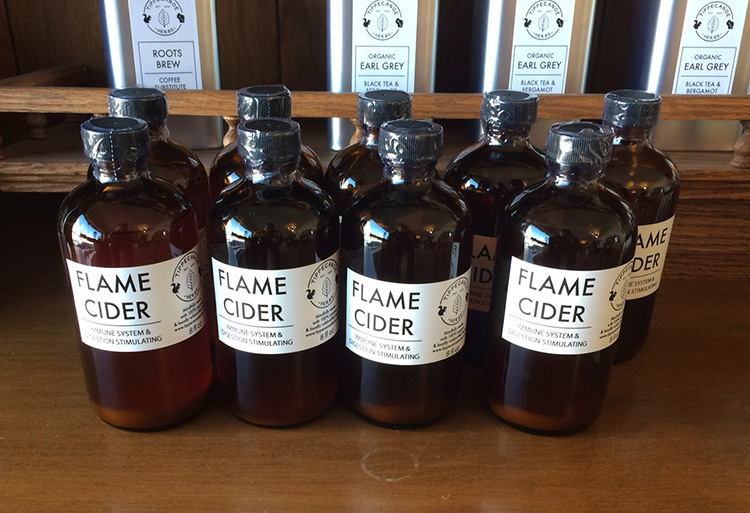 I took stock of his inventory that ranged from tonics and tinctures to teas and ear candles. I asked an annoying number of questions about nearly every product and told him some areas I wanted to focus on. I left Tippecanoe with five items, costing approximately $50 total: Flame Cider, Golden Milk powder, Elderberry Syrup, something called Kava Kava, and a copper tongue scraper. I told myself I’d use everything daily for two weeks to see if I noticed any difference.

I started and ended each day by scraping my tongue with an angular copper device that looks like a Medieval torture instrument. Denton told me the tongue is the reflection of the rest of the body, and encouraged six or seven swipes daily to remove the plaque-like gunk off my tongue. “It is easier than flossing, and just as satisfying.” I removed a shocking and embarrassing amount of grossness from my tongue at first, but it reduced after a few days. In time, I also noticed my sinuses cleared a little. After accidentally gagging myself with the scraper at least two times every morning, I moved onto Flame Cider.

“Flame Cider is an old digestion and immune tonic that I’ve modified to fit our local environment,” Denton says. The tonic is made with apple cider vinegar and honey that’s been infused with onion, ginger, garlic, basil, hibiscus, tumeric, astragalus, burdock root, and cayenne. The recommended daily dose is either a teaspoon OR you can use as much as you want for salad dressing. You know, the same way you can substitute cough medicine for salad dressing…right? With all due respect to Denton and Tippecanoe Herbs, I legitimately grew to hate Flame Cider. It was overwhelmingly vinegary and pungent, and I woke each day dreading my daily dose. But goddammit if it didn’t have a positive impact.

As the name would suggest, I felt it igniting my system, as if I was stoking a flame that was left to dwindle overnight and bringing it back to life. Between that and the straight-up putrid taste that shocked my system, I found I woke up and became alert much faster than usual. I never did use it as salad dressing, and I can promise I never will. 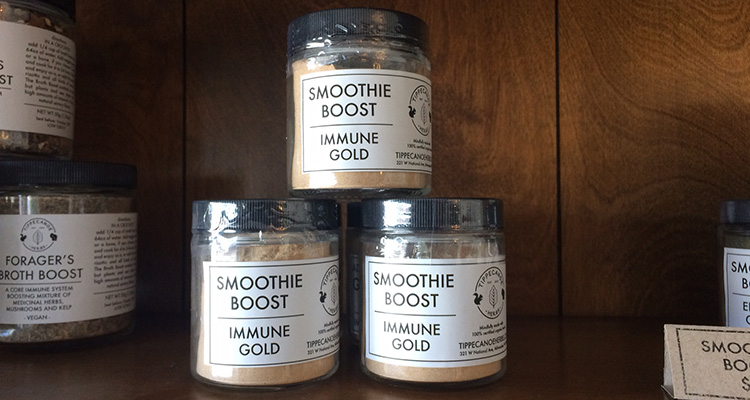 In futile effort to mask the taste, I learned to instantly chase my Flame Cider with the Immune Gold smoothie powder (1/2 to 1 Tbsp), which I stirred into about six ounces of almond milk. It, too, didn’t taste very good at all…though a smoothie may have helped mask the chalky and spicy blend of ashwagandha, tumeric, astragalus, shatavari, ginger, cinnamon, cardamom, and maca better. Flavor aside, I felt this immune booster and stress reliever was the most effective item I used. Maybe it was just the relief from concluding my daily holistic speedball, but felt immediately energized and alert once I chugged the spicy milk. I might not make it part of my everyday regimen, but I’ll certainly buy it again (and I will soon, since I’m out of it at the moment). 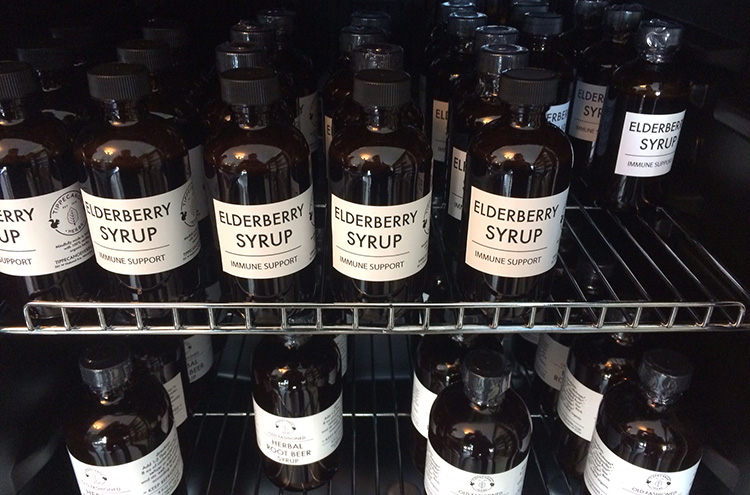 The best selling item at Tippecanoe right now is Elderberry Syrup. The tremendously sweet amalgam of elderberry, raw honey, goji berries, rose hips, ginger, cinnamon, cardamom, and cloves is said to fight off the way the flu reproduces in the body. Noting my raspy voice and lingering cold during my visit, Denton recommended I take four teaspoons over the course of each day. I gladly complied…and then some. It was delicious. Since I paired it with traditional medicine, I can’t fully attest to its effectiveness, but the sweet shot of vitamins I was introducing to my immune system surely didn’t hurt.

I finished each day with another grueling tongue scrape and some Kava Kava—a south Pacific root Denton says is often used in tea that supports relaxation and socialization. Tippecanoe’s Kava Kava was ground up and combined with alcohol to take the form of a sort of tongue-numbing bitters. While ending each night with an eyedropper full of booze didn’t seem to exactly promote health, I found the Kava Kava to be akin to a more potent form of melatonin. I went out like a light, allegedly snored loudly, had vivid and strange dreams, and woke up feeling as if I’d slept much longer than I had. In smaller doses, it can also help alleviate daytime stress and tension.

So what did I learn after a few weeks drinking herbs, scraping my tongue, and dousing my cold with a blend of berries? While I’m not going to rush out to burn sage and scoop colorful powders from the bulk herb bin to cure whatever ails me, I did see the benefit in incorporating some natural remedies into my everyday (or at least every now and then) existence to help re-calibrate and fine-tune my internal machine. They aren’t what the doctor ordered and they surely aren’t the answer on their own, but every herbal treatment I tried could have at least a supporting role in subtly-yet-certainly improving the way I feel.