For the first time in decades, Milwaukee is a city without a comedy club. The abrupt end of Jokerz Comedy Club earlier this month follows Milwaukee Comedy Cafe’s decision to relocate from its longtime Brady Street digs to a small second floor spot on Old World Third Street in 2015, which has gone unused since last spring. Comedy Cafe recently started hosting comedy shows at a place at 906 S. Barclay St. called “The Point,” but not with any regularity at this point. Bonkerz Comedy has transitioned from a club into a production company that occasionally produces stand-up shows at Potawatomi Hotel & Casino’s Northern Lights Theater.

Though Northern Lights Theater, BMO Harris Bradley Center, and Pabst Theater Group’s trinity of venues routinely bring some of the biggest names in comedy to town, you’d think the absence of dedicated comedy clubs would leave Milwaukee without an outlet for lesser-known touring comedians and up-and-coming regional performers, right? Wrong. A few dedicated local producers and performers have taken it upon themselves to fill the city’s comic void by bringing comedians and shows they—and many others—would like to see to Milwaukee breweries, bar rooms, and even the Grand Avenue Mall basement.

Matt Kemple is the person responsible for many of those shows. Kemple has owned and operated The Underground Collaborative (the aforementioned 110-capacity theater space in the mall’s basement) for close to six years, and has booked shows all around town under the “Milwaukee Comedy” umbrella for even longer. The longtime theater producer and Milwaukee Comedy Festival founder’s foray into stand-up booking was simple: Milwaukee wanted more than it was getting.

“I started producing just out of the need and desire to want more out of the comedy scene. When I was producing, it was basically because there was nobody putting on comedy shows,” Kemple says. “All of a sudden, we’re the ones filling this niche of this middle level of comedy that people really want to get, but nobody is putting those shows on. We need to be the ones doing that.” 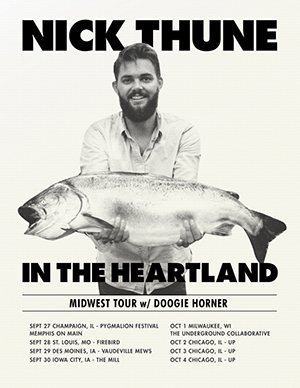 Just some of the notable comedians Kemple and his cohorts have booked at The UC or sites like Club Garibaldi include Nick Thune (twice), Andy Kindler, Hari Kondabolu, Matt Braunger, Godfrey, Joe Mande, Emily Heller, Johnny Pemberton, Josh Fadem, and Neil Hamburger. This weekend, The Underground Collaborative will host a pair of shows from veteran comedy legend Todd Barry. Barry performed at Turner Hall his last two times in Milwaukee and at Comedy Cafe before that.

“Todd Barry is doing his show with us because it’s the crowd work tour. He wants to see the people. It’s an intimate theater venue, not a comedy club. He can look out and see people on seats that are on risers,” Kemple says. “There aren’t people coming and going and interrupting the show trying to sell two drink minimums and nachos. It’s an environment that’s set up to make what he’s doing as successful as possible.”

In addition to sporadic high-profile bookings at The UC and other traditional venues, Milwaukee Comedy also produces shows at unconventional sites like Karma, Var Gallery, and will debut a monthly “Craft Brew Comedy” showcase at Good City Brewing tonight. The first show in the East Side brewery’s 150-capacity hall has already sold out.

“Not everybody wants to come to [The UC], so if you can bring comedy to those people, that’s what keeps things exciting,” Kemple says. “And just having different rooms and different environments, it makes it a different kind of show.”

The largest and most successful of Milwaukee Comedy’s regular productions is Keg Stand Up, a monthly stand-up showcase at Lakefront Brewery. The show, which started in August of 2105 and became a recurring fixture at the brewery in June of 2016, brings some of the Midwest’s most talented humorists to Lakefront’s spacious Beer Hall on select Sunday nights. Within its first few months, Keg Stand Up’s attendance has ballooned. The show now brings more than 200 people to the brewery and routinely sells out.

“It seems like we’ve garnered a cool following. I joke that we masquerade as a comedy venue once a month,” Lakefront Tour Manager and Taproom Event Manager Dylan Mazurkiewicz says. “Maybe it comes at a good time for some of these comedy venues closing down to all of a sudden have all these new breweries open up. There’s now opportunities to be hosting these shows.”

Another Milwaukee brewery taking advantage of the comedy boom and club closures is Urban Harvest, a new Walker’s Point microbrewery that doubles as the home base for Mojo Dojo. Since late 2016, the local improv collective has hosted two or three shows a week in the brewery’s cozy performance space in addition to its “Open Dojo” improv classes each Wednesday. 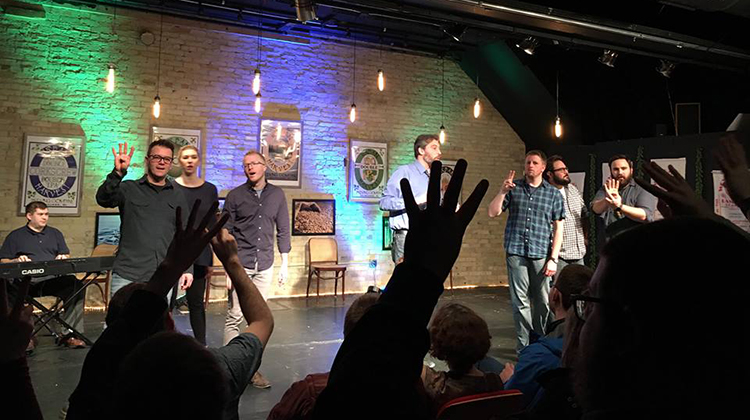 “If you’re not seeing the kind of comedy you like in town, that means there’s a void, and you can fill it. And the beautiful thing about Milwaukee is there are a lot of opportunities to try things out,” Mojo Dojo co-founder and Tall Boys improviser James Boland says. “In general, local business owners like to be part of something different and fun, especially if you’re willing to handle most of the workload and promotion. If you have an idea and are passionate, you can make it happen.”

Urban Harvest’s approximately 60-person theater has rows of tiered seats nestled before a vast stage that perfectly suits Mojo Dojo’s longform improv, as well as local stand-up showcases and sketch troupes who use the space as well.

Outside of the work Milwaukee Comedy and Mojo Dojo do week in and week out, comedians Nate Seek and Ryan Holman host a monthly Sugar Maple stand-up show, and Cream City Comedy Festival has brought noted national comedians like Nick Vatterott, Ben Kronberg, and this year’s upcoming headliner Adam Cayton-Holland to Club Garibaldi. Those are just some examples of independent showcases that, along with top-tier comics regularly taking the stage at larger Milwaukee venues, are keeping the laughs coming.

Sure, there’s no true comedy club in Milwaukee anymore, but as long as passionate producers are putting in the work to bring comedians of all calibers to a variety of stages in the city, that’s no problem.

“For me, it’s not the money-making aspect of it as much as the desire to see the comedy scene thrive. Nobody else is doing it, so what can we do to fill this gap that exists right now?,” Kemple says. “I just want to make it so that you’re not seeing the same thing over and over and over again because then what’s the fucking point?”