Last month, legendary NBA coach George Karl published a book he co-wrote with Curt Sampson entitled, Furious George: My Forty Years Surviving NBA Divas, Clueless GMs, and Poor Shot Selection. In the revealing memoir, the Association’s fifth all-time most winning coach, the two-time cancer survivor, the father, and the all-around controversial leader opens up about his life both on and off the court.

In addition to learning about his decades-long disdain for Phil Jackson, the years he spent rebuilding the strained relationship with his son, his strange love of Miller Lite, his health struggles, and the long road in semi-professional and international basketball that finally led to an NBA bench, Karl also offers candid insight into the locker rooms and front office dealings that took place during his 27 seasons spent coaching the Cavaliers, Warriors, Sonics, Nuggets, Kings, and Bucks.

In his five-season Milwaukee Bucks tenure (1998-99 to 2002-03), Karl went 205-173 (and 14-18 in the playoffs). He helped polish a young and unproven team into a perennial contender, he commanded a 2000-01 squad that came one game from reaching the NBA Finals, he butted heads with Ray Allen, he loved Herb Kohl, and played an instrumental part in dismantling the team before parting ways with the organization. Furious George is a pretty interesting read in its entirety, but if you’re just looking for some greatest hits about his time in Milwaukee, here are the 15 most interesting things we read.

1. On looking back at his five seasons as Bucks head coach
“Milwaukee. Just saying the word brings back some crazy memories. While in Milwaukee, I received my greatest honor, that was simultaneously my worst experience as a coach. I endured my most embarrassing PR fiasco. We kicked some ass, moving past teams that thought they owned the East. Another NBA conspiracy theory erupted. My father died. My wife divorced me. My team collapsed and I lost my job. I turned 50. My son and I tried to repair our damaged relationship. I started dating for the first time in 26 years, and cancer smoldered inside me. In other words, life got in the way of basketball.”

2. On the day he met then-Bucks owner, Senator Herb Kohl
“The Senator and I talked for about two hours. I immediately liked his intelligence and his dedication to Brew City and the Badger State. I even liked his politics. I’d have voted along with him if I was in the Senate.”

3. On quickly falling in love with Milwaukee’s cuisine
“During the unusually hot summer of 1998, I discovered that they butter the burger and butter the buns in Milwaukee. ‘Medium rare, Swiss, fries,’ I’d tell the waitress at Elsa’s, Jake’s or Dr. Dawg. ‘Let’s have some onion rings while we’re waiting. And I’ll have two Miller Lites. Yeah, two.'”

4. On the Bucks team he inherited
“They had two guys you could build around in Ray Allen and Glenn Robinson, the number one draft pick of 1994. The rest of the team was a strange Milwaukee brew. Six-foot-eight, 300-pound Robert “Tractor” Traylor was the bad half of one of the worst draft-day trades in NBA history. Dallas got Dirk Nowitzki. Scott Williams was the center. He played the right way, with a lot of passion and he’d gone to UNC. We had two Currys: Michael and Dell. Dell had a little dribbler at home named Stephen.”

5. On Bucks center Ervin Johnson
“Ervin Johnson blocked shots and defended the perimeter amazingly well for a big guy, but he had no offense to speak of.”

6. On paying his son and his son’s friends to toilet paper Ray Allen’s house
“Coby and his friends would loiter in my office in the Bradley Center sometimes, doing their homework, talking about girls, bouncing basketballs, whatever. One time, Ray Allen walked by and made a teasing comment about Coby’s friend’s plaid pants. ‘We ought to TP his house,’ one of them muttered when Ray walked away. I slapped a $100 bill on the desk. ‘On me,’ I said. I heard they did a hell of a job.”

7. On “The Big 3”
“Glenn Robinson barely spoke, and Ray Allen smiled as if he was amused when he made a mistake on the court … While Sam [Cassell] couldn’t defend like Gary Payton, he was a good passer and a very good shooter, and man did he bring the noise. Sam talked constantly, like Gary. A happy, likable guy. I’d have preferred he become meaner, more of asshole to the other team—like Gary.

8. On his friendship with short-tenured Bucks guard Gary Payton
“As I mentioned, Gary Payton is one of my five best friends.”

9. On trading Ray Allen for Gary Payton
“The media, Bucks fans, and Ray were shocked. Allen was 27 and one of the best shooters in the league. Gary was 34, had lost a step, and would be a free agent at the end of the season. But Desmond [Mason] turned out to be pretty good, and I really wanted Gary’s defense and his attitude to try and save our season. But most of all, it was a relief to see Ray gone. It was like popping a blister.”

10. On his Bucks contract extension
“During those optimistic days, the Senator offered me an extension that not only would make me the highest-paid coach in sports (although $1M of my $7M a year would be deferred for 10 years), I would also become a one-percent owner of the team. Crazy! The contract sat for months on a table in my living room, while I tried to understand this insane amount of money. I didn’t sign it for a while.”

11. On Anthony Mason
“I’d have said Anthony Mason destroyed our delicate balance of talent and egos. While protecting a moral Christian persona, he was the guy in the back of the bus or the back the plane bitching about minutes, the guards not getting him the ball near the hoop when he wanted it, and turning his teammates against the coaches. I put my ass on the line to get him. He put on weight. I put him on the bench. He put on his unhappy face and he didn’t take it off.”

12. On then-player and future Bucks coach Jason Kidd (and others) pulling out of the 2002 FIBA World Championship
“With [Jason Kidd] reading the floor and leading the team the coaches knew we wouldn’t have to work that hard during the game. We valued his leadership as much as his other skills. But one by one—Kidd, Shaq, Kobe, Duncan, Garnett, Iverson, and McGrady—announced that they’d prefer not to interrupt their summer vacations with more basketball. ‘Fatigue’ they said. I didn’t take the news well. Some of these absences smelled like the usual NBA greed to me, player protecting their earning power, instead of accepting a challenge and a great honor. Not having Kidd left us in the lurch.”

13. On firing longtime assistant and future Bucks coach Terry Stotts
“Hardest of all was cutting ties with Terry Stotts, who had been my loyal right hand man and best friend for 15 years. I could have told him honestly that this detour was for the best because it would be better for his career to get out of my shadow. And that’s exactly what happened. In a matter of weeks, Terry had a job assisting Lon Kruger at Atlanta. When they fired Lon 27 games into the season, Terry was promoted to head coach. But he felt is if he had been thrown under the bus to save my ass. Maybe he had. Our friendship suffered, to my deep regret.”

14. On losing his job as Bucks coach
“It was a grim meeting. We discussed personalities and egos and trades and disappointment and the team’s direction. We couldn’t agree on a number for an extension that would keep me as the Bucks coach. I think we both knew that going in. I did quit and I wasn’t fired, but I walked out of the meeting unemployed. The Bucks would have to pay me for the final year of my contract. I’d get $7M not to coach the team.”

15. On the 2000-01 Eastern Conference Finals conspiracy
“At a crucial point late in the fourth quarter, Glenn Robinson plainly got smacked on the elbow as he shot a jumper. You could hear it. And the Sixers got a breakaway layup. We lost at home 89-83 and the series was tied. In Game 5, Glenn and Ervin Johnson got called for touch fouls. Then, when [Allen] Iverson his Sam [Cassell] on the arm as he shot right in front of referee Ronnie Nunn, no call. Thanks to a couple tacks on us, the Sixers had a five-point possession and two fouls.

“Commission Stern watched the game in person at Philly’s arena and forgot himself for a few moments and acted like a Philly fan. I didn’t see it, but a lot of people noticed when he stood up and seemed outraged when A.I. got fouled and it wasn’t called. We lost 89-88 and Ray and I did the bitching that cost us and the Senator some money. I’ll always remember that Game 5, and I’ll always hate it.” 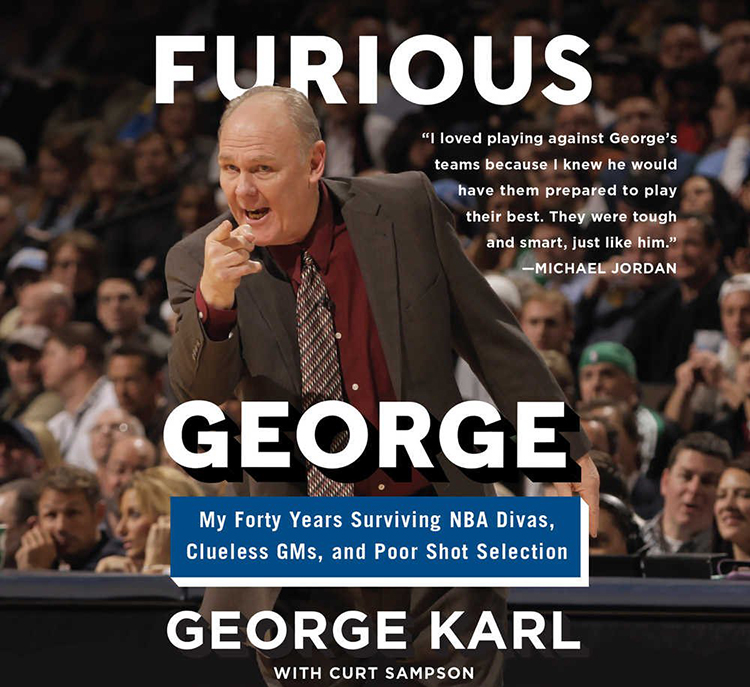