Though this series isn’t very old, you might already be able to pick up on a common theme. Basically, in my efforts to build, improve, and grow Milwaukee Record, I’ve knowingly put my own physical and mental wellness squarely in the back seat. Friendships and familial connections have suffered as a direct result. And while I expended the majority of my energy feeding my business, I’ve basically shoved whatever food or beverages in my face that I could either have on the go, prepare without much effort, or that could help momentarily pacify me as I navigate the increasingly stressful and unpredictable career I’ve fashioned for myself. Between those eating/drinking habits and the metabolism hit that comes when one enters their early 30s, I’ve put on some weight.

I’m not proud of it, but it’s happened and I can’t change the way I’ve behaved for the past few years to bring me there. What I can change are the decisions I make going forward. After hearing about it from others on Facebook and hearing a ringing endorsement at my recent chiropractor appointment, I decided I’d try The Whole30 diet. While I wasn’t sure that a fad diet that seems tailored to housewives in their 50s was for me, I was aware that something had to change. Once able to pass as “Wisconsin Skinny” on account of being 6’1″ and having broad shoulders that feigned some semblance of strength, poor eating habits, regularly drinking, and rarely exercising in recent years quickly piled pounds on my frame and started messing with my digestion. After I worked up the courage to step on a scale, I was shocked to learn I was closer to 250 pounds than I was to 200. I had to do something.

More accurately, I had to do nothing. After doing a little bit of research and asking a friend about her Whole30 experience, I decided to change my situation by omitting virtually everything from my diet. It’s more nuanced than this, but essentially the rules of The Whole30 are simple: No sugar, no alcohol, no legumes, no grains, no dairy, and no cheating for 30 consecutive days. What’s left basically boils down to meat, vegetables, fruits, and simple spices like salt and pepper. There’s no wiggle room. Black coffee is allowed. Gum is not. Un-fried potato preparations are okay, but beans and nuts are not. Shit, even seasoning salt is banned because there’s sugar in it. Once schooled on the strict-but-simple guidelines, I set April 29 as my first day and embraced the month of limitations to come.

The first few days were pretty easy. I started on a Sunday, and early the following week was kind of a breeze. I loaded up on produce and meats—a significant change from my typically vegetarian dining habits at home—from Fresh Thyme, with a few organic goods from Outpost worked in as well. I had a rotisserie chicken, made turkey burger patties with pickles and yellow mustard, and I enjoyed two eggs and slices of Peterson’s Natural Farms Sugar-Free bacon (the only Whole30 compliant bacon) for breakfast each day. I’d snack on berries and baby carrots. I tried this “water” stuff I’ve heard so much about and it was actually pretty good. It was fine not having beer for a few days, and I figured it kept up like this, it’d be easy. But it didn’t stay easy much longer.

Around day four and five, I was hit with major withdrawals. There was no sugar left in my system, leaving me sapped of energy, bouting with an intense headache, and irritable. It sucked and I hadn’t even hit my first weekend yet. Essentially, I was breaking my system and rebuilding my reliance on specific foods. Once that passed, I felt replenished and better than before I started. It was the worst things got over the entirety of the experience. After that, I fell into a rhythm. I prepared recipes, used my slow cooker, roasted brussel sprouts in the oven, baked salmon, and plowed through countless avocados. With the money I was saving on alcohol, I justified going to coffee shops whenever I wanted to buy delights like Anodyne’s cold brew and Colectivo’s sport tea. On top of the quality, it was, frankly, something to do.

While the diet itself was fairly easy and already showing results (with eight pound melting off in the first two weeks), the truly difficult part of The Whole30 is the social element. Yes, there’s a lot to do in Milwaukee without drinking, and the arrival of nice weather is part of why I picked May to do this. Still, the myriad of self-imposed dining and drinking limitations left me feeling isolated and lonely much of the time. I went to shows and had coffee or water, but as the nights wore on, I’d be bored and annoyed. I’d hang with people at bars, but want to leave after an hour spent sipping water after water. I started going to movies—any movie at all—just to kill time and do something away from my house. I’d walk aimlessly. The majority of my conversations with people had to do with what I wasn’t allowed to have, why I decided to do this diet in the first place, and when it would end. Sure, I was never more productive and better rested, but most of that was on account of sheer boredom. I wish I could say I discovered a new interest and that I don’t need alcohol to have fun, but I learned that might not be accurate. 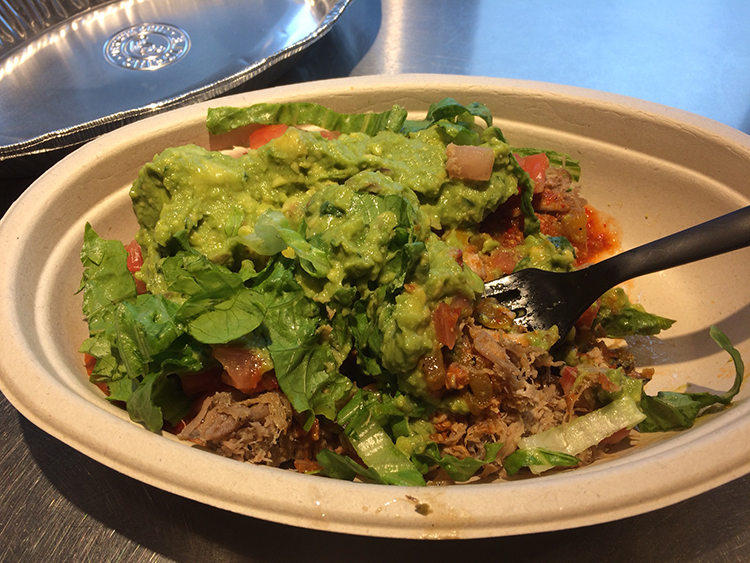 Eventually, I felt comfortable (and desperate) enough to try going out to eat. I decided chicken fajitas at Cafe Corazon (without rice, beans, and tortillas) with a heaping dollop of guacamole worked within the restrictions. I learned that Chipotle has exactly one item that’s okay (a carnitas bowl, by the way). I had grilled chicken salads with balsamic vinaigrette dressings. Though it still wasn’t ideal, the social, communal, and normal activity of dining out made a huge difference that helped get me to the end in one piece.

In the waning days of the Whole30, I was doing great. I looked better and felt renewed. The diet was just second nature by that point, and I didn’t miss sugar or starch in the slightest. I was also shocked that I had zero desire to eat dairy the entire time. The only consistent craving I had was beer. I missed it, especially once Memorial Day weekend rolled around. Memorial Day was my last day of the diet, which included drinking water during three pickup softball games as others had beer from a keg and brats. I should’ve started a day earlier. I thought back to the beers I had while watching the Bucks getting blown out by the Celtics in Game 7 at the end of April and wished I’d reconsidered my start date.

Regardless of my regrettable end date, I made it all 30 days without stumbling. In all, I lost 16 pounds. In the process, I gained an appreciation for those who choose to live an entirely sober life and I learned that I still had willpower when I wanted to, which I hope continues in my food choices post-Whole30. Yes, I got extremely drunk on Tuesday (my tolerance is terrible now!) and I ate a burrito, but I feel this fad diet was both a way to go into a busy-but-fun summer with more energy and less weight than before, and a reminder that small decisions about what you put into your body every day can add up in positive and negative ways. I might do the Whole30 again next year, but will make sure it ends before a holiday weekend next time.