As is the case with most Friday nights—when fish is on the horizon—I was in a jocular mood. I was sitting in Tally’s Tap & Eatery in Waukesha (S31W24661 W. Sunset Dr., 262-446-3153), sipping an Old Fashioned, and childishly amused that I could see a sign a few businesses down that said “Tuffy.” I imagined that all the businesses lining Sunset Drive had silly sounding names that started with “T’s,” like “Tappy,” “Taffy,” and “Tubby.” That’s how I thought this article would play out, full of frivolousness and lines about how sweet the tartar sauce was or what the vegetables in the clam chowder were shaped like. 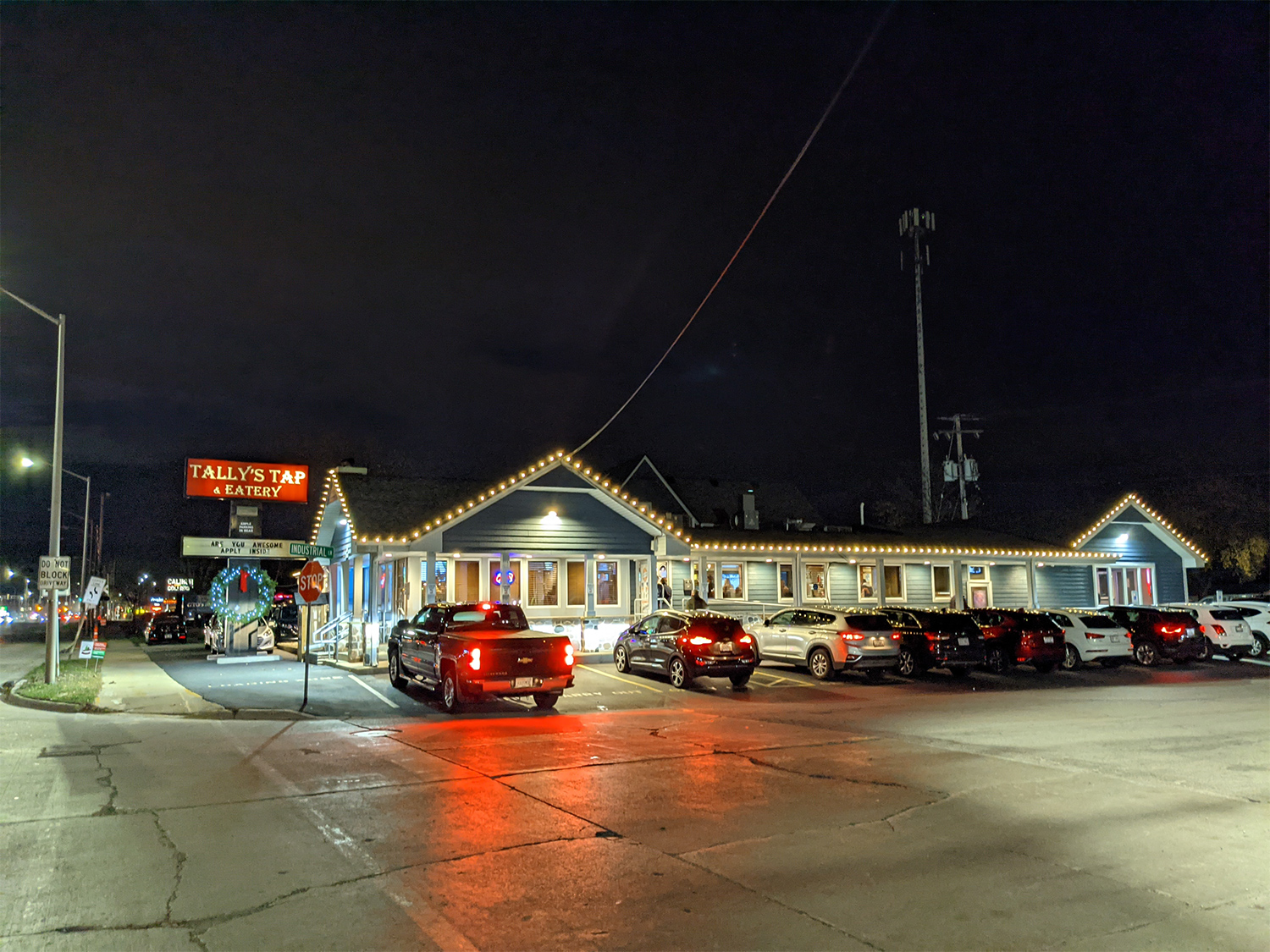 But madness and horror descended on Waukesha merely 48 hours after I ate at Tally’s Tap, and tartar sauce sweetness and vegetable shapes seem trivial, at least if the weight of the moment isn’t first acknowledged. Tally’s Tap was bustling last Friday, and the mind can’t help but wonder how many people eating there would soon witness the horror, or if any had their lives irrevocably changed by it. One night, a fish fry. Another night, carnage.

Of all the places I could have gone last Friday, what brought me to a place in Waukesha? For one, I hadn’t gotten fish in the city—or maybe been there for anything—since March 2020. For another, I had fish in Milwaukee the week before, and at a place south of Milwaukee the week before that, so heading west made sense. Lastly, I had a note saved that said Tally’s Tap once had an all-you-can-eat fish fry. There is no indication of all-you-can-eat fish on their website, but being that they once had it felt like reason enough to make the drive.

Opened in 2013, Tally’s Tap is located in a building that has been in the same family for decades, that had been the home of Tallinger’s. The parking lot was packed when I arrived, and most of the tables were taken, yet I was seated almost immediately. Not long after, I ordered an Old Fashioned and had a menu in hand. 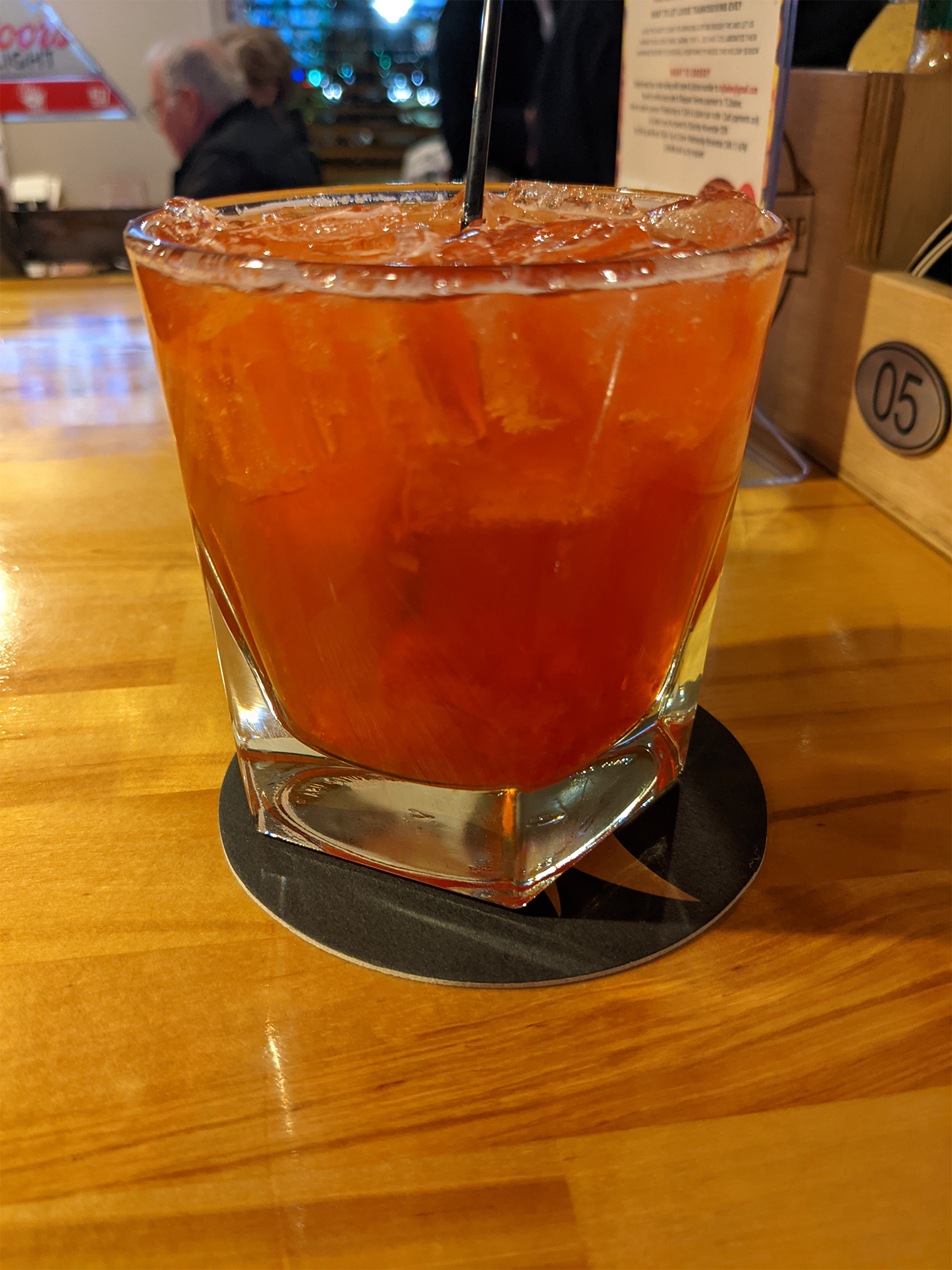 The Friday seafood specials at Tally’s Tap are tropical fish tacos ($14), beer battered cod ($14), beer battered perch ($16), and baked cod ($17). Each comes with a choice of clam chowder, coleslaw, or salad, with a choice of potato, and with a dinner roll. A fish fry just for kids ($7) is also available and consists of a piece of beer battered cod with fries or apple sauce. I asked if all-you-can-eat fish was still an option. It wasn’t, but I was told the cod fillets were large, and that extra pieces could be purchased for $2 or $2.50. I ordered cod with potato pancakes, and requested to have both clam chowder and coleslaw.

Heavily muddled, the Old Fashioned was bright in flavor and color. The chowder, which was served with the dinner roll, diverged from the usual New England style, and was stew-like, with salt pork or bacon, big skin-on potato chunks, carrot, celery, seasonings, and, would you believe it, some clam. 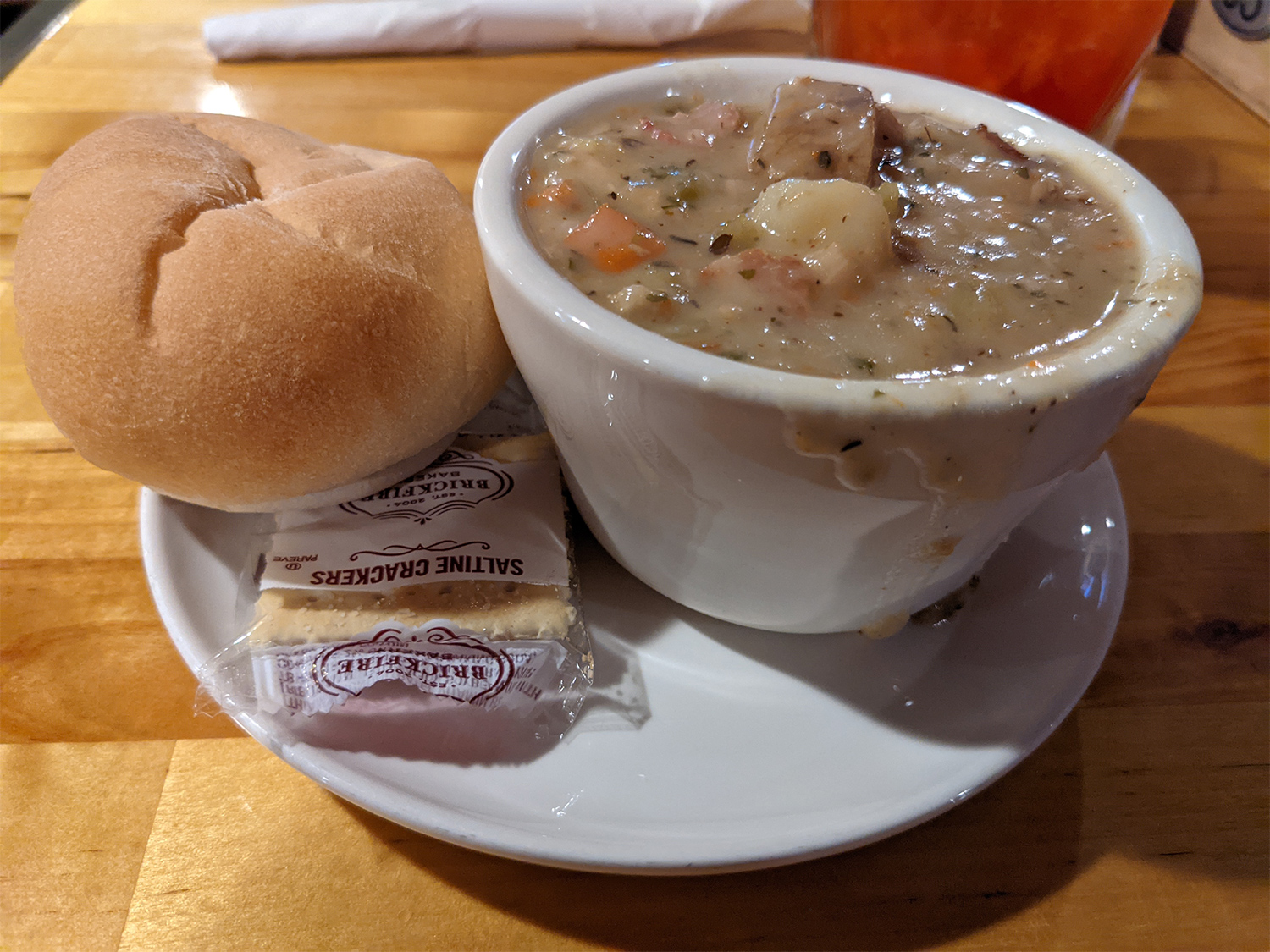 I failed to notice the numerous electronically illuminated beer tap menus hung on the walls among the 400 televisions turned to sports channels, so I asked my server what they had on tap for pilsners. With a name like Tap, I was hoping for some unique choices, but there wasn’t much beyond Miller Lite, and I ended up ordering a Spotted Cow. There were many other unique tap beers, however, enough to make the restaurant deserving of its name.

As promised, the cod fillets were huge, and so was the plate they rested on. The delightfulness of the fish was not so much in the fillets, which weren’t too emotive, but in the batter that covered them. Sometimes I write about how flaky a fish is, referring to fillets, but in this case the flakiness resided in the batter. It encapsulated the fish all so delicately, and a light crispiness came from each bite, reminding me a little bit of filo pastry on a baklava. The batter’s beer flavor harmonized with a butteriness, its other essential characteristic besides its texture. No affectations could be found swirling in the thick, classic tartar, which was steadfast but not altogether memorable.

The pancakes were hefty, both thick and of a somewhat large circumference. Neither overly stringy nor completely compact and uniform, they were mild in flavor, with only a modicum of seasoning. An ice cream-sized bowl of coleslaw was just as refreshing as any double scoop. The slaw managed to be expressive while retaining a simpleness, not an easy feat in times when bells and whistles are being added to every gadget imaginable and overstimulation saps the mind. 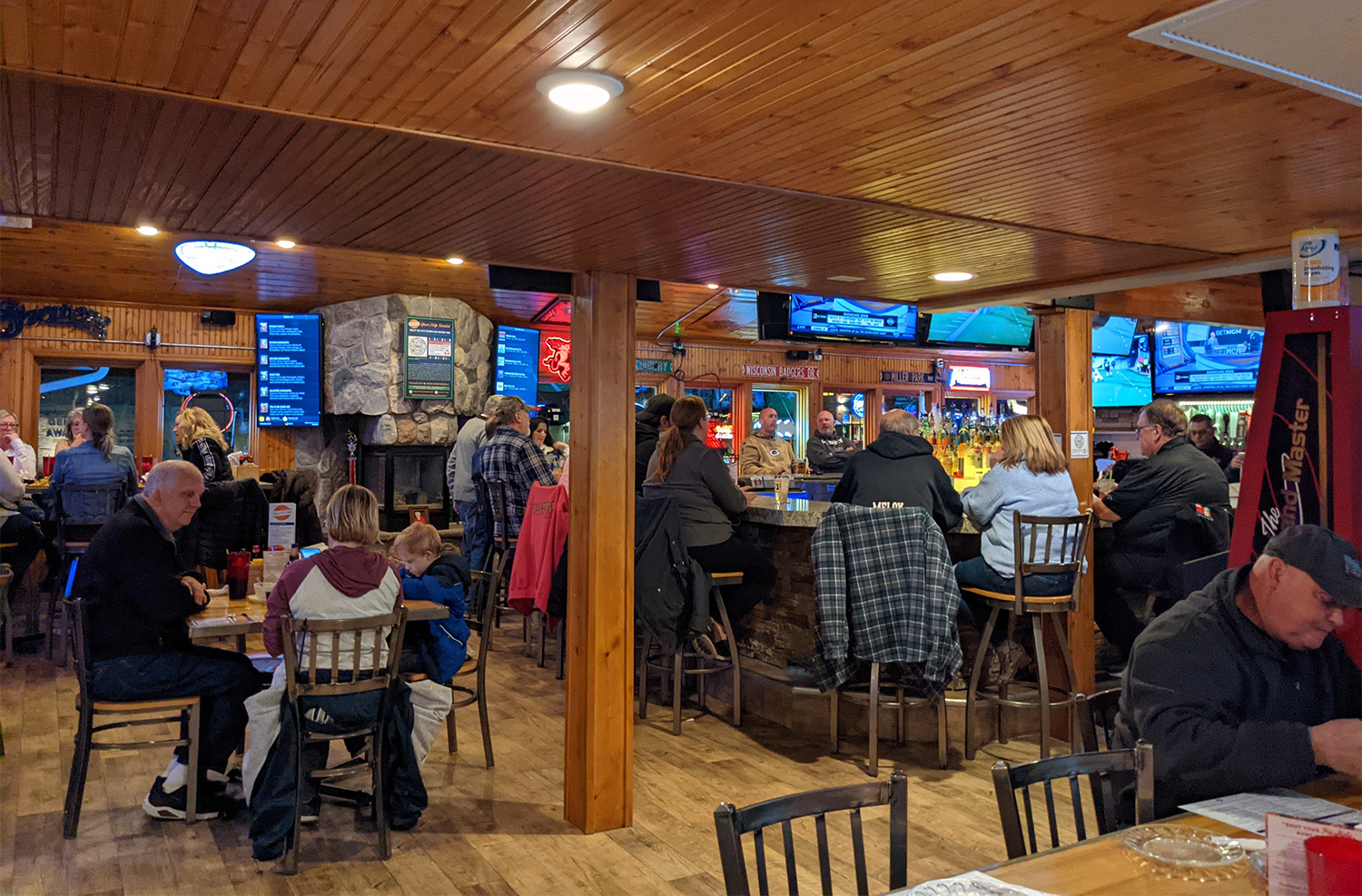 Tally’s Tap & Eatery might have had an all-you-can-eat fish fry at some point, but it no longer is necessary given the size of their current fish fry. The fish I had was largely on mark, especially the batter, as were the pancakes and coleslaw, for an all-around enjoyable fish fry experience. Waukesha may be hurting and grieving right now, but its residents will rise and heal together. A Friday fish fry might not fix anything, but a community that has places like Tally’s Tap to gather at is bound to make it in the end.

Takeaways: It’s not all you can eat, but you get enough food anyway; stew-like chowder; light, crispy, and buttery batter; steadfast tartar; refreshing coleslaw; hefty pancakes; there are many ways to support the Waukesha Christmas parade victims; In need of a fish fry playlist for your Friday? Check out this one I came up with for Crutch of Memory. 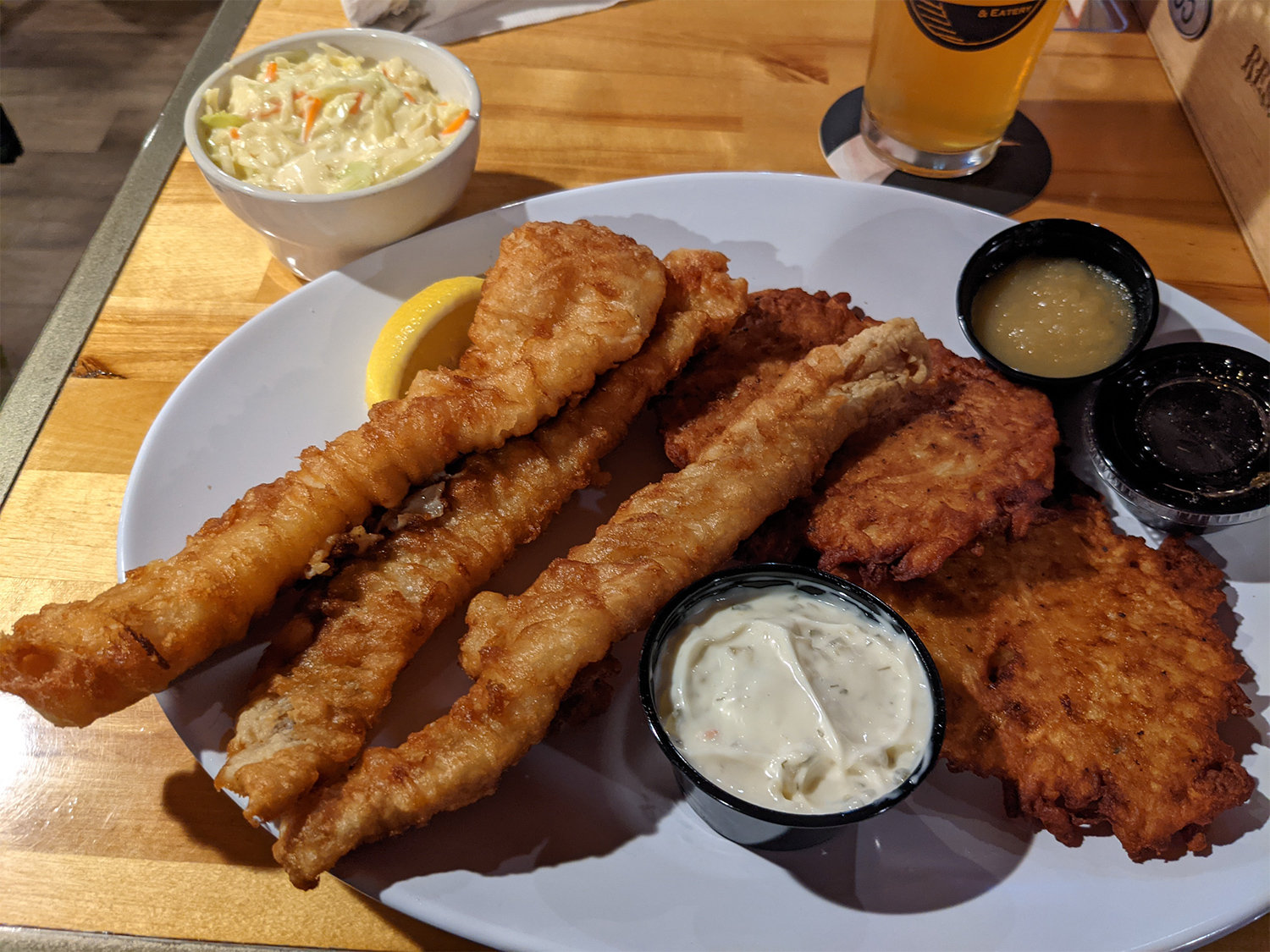