Chances are you’ve heard some variation of the joke, “When Riverwest hipsters get families or better jobs, they move to Bay View.” Like many jokes, there may be some truth to this one, but Bay View is so much more than craft beer, trendy restaurants, and coffee shops, and not everyone who lives there is between the ages of 25 and 40. There seems to be a parallel Bay View. It is a community built on tradition, where some families have lived for generations. It is a place where you can get a meal—with dessert included—for under $10 at Landmark Family Restaurant. And it is a place where you can see a concert in a house built in the 1870s—the Beulah Brinton house, which is also home to the Bay View Historical Society.

Named for Amsterdam’s Centraal Station, Café Centraal (2306 S. Kinnickinnic Ave., 414-755-0378) seems to fit somewhere between the newer, hipper Bay View, and the older, historic Bay View. It is only a decade old, having opened in 2008, but it’s located in the Grange building, which was built in 1897. At the time the building was built, Bay View had only been a part of Milwaukee for a decade, and the Bay View Rolling Mill was still the bedrock of the community. From what I can tell, the building was either named for Richardson Grange, who had a hand in its construction, or his son William, who was a prominent Milwaukee real estate developer who had his offices in it. Grange Avenue just south of the city is named for him.

Starting in 1898, the part of the building that is now Café Centraal was a drug store. It was Prentice Drug for close to 90 years and then became a Gull Pharmacy. It then housed some dental offices before becoming Café Centraal. The Grange building also houses Freya Salon, Milwaukee Community Acupuncture, Cream City Chiropractic, and Saffron Yoga Center. Over the years, many other businesses, offices, and workers have been in these parts of the building, such as William Grange’s offices, lawyers, physicians, a lamp shade maker, the Bay View Dressmaking Shop, and the Wisconsin College of Music.

I was playing a show in Bay View this past Friday, and had to load in around dinner time, so it made the most sense to find some place nearby for fish. Over the years I have gotten fish at Café Centraal at least six times, but it had been more than two years since my last visit. The band piled in a vehicle, and we got the Johnny Carson spot outside the building.

It was dimly lit inside, and it was hard to tell if the place looked half empty because of that, or because of the rather large size of the room. One thing that could not be missed was the long bar, which has a base made of old Cream City brick. We didn’t find any fish fry menus at our table, but our waitress told us right away that fish was the special of the night.

Café Centraal serves fried cod ($11.95/$13.95 all-you-can-eat) all day on Fridays, which can be ordered “bier” battered or with a potato chip batter. Side choices are French fries—known as frites—or soup or salad. For a dollar more you can opt for sweet potato frites. We all ordered Old Fashioneds, and then the fish. I went with the all-you-can eat, and started with the beer battered. Sadly, they didn’t have any clam chowder; the soup of the day was squash soup, which somehow seemed fitting because it was the day after Thanksgiving, but I passed.

When our waitress brought our Old Fashioneds, she said she had accidentally made us “Who you calling Old Fashioned?” Old Fashioneds, and not regular ones. She said there wasn’t much of a difference between the two, but we never got down to exactly what was in them. The most notable difference was they had a purple tint that Old Fashioneds usually don’t have. Perhaps the color came in part from the cherries that were at the bottom of the glass, which may have been the sweetest dark red cherries I have ever had. After downing that, I ordered the beer of the month, a German pilsner from Luxembourg made by Bofferding.

The beer battered fish was mildly flavored with a balanced texture. It wasn’t too crunchy or greasy, and it held together well. Overall I was pretty impressed with it. The tartar had a thinner consistency, was light on relish, but heavy on dill. The frites were also of a very high quality, being some of the better ones I’ve had in awhile. The coleslaw was almost entirely made of green cabbage, except for a few small cuts of hot red peppers that were found here and there. It was unique in that it was made with sesame oil, instead of the usual vinegar or mayonnaise. It came with a half slice of light rye with a packet of butter—my only complaint being the butter was a little too cold to spread on the bread.

When I was about halfway done with my plate of food, I ordered some more fish, and my waitress said she would bring out more of each kind for the two of us who had ordered the all-you-can-eat. The potato chip battered fish was a little on the salty side, probably because, well, it was covered in potato chips. The chips also made the fish crunchy and bulky. The fish was fine, and I’m glad the restaurant has something nontraditional available, but I finished off with another piece of the beer battered.

For me, Café Centraal is the first place that comes to mind when I think of all-you-can-eat fish in Bay View. It is one of the better fish frys in a neighborhood that has a handful of decent ones, although I have yet to find a fish fry spot in Bay View that is at the far top tier of fish frys. Baby Boomers is respectable, and I remember Honeypie being so as well. Barnacle Bud’s and the South Shore Terrace are good options during the warmer months, and there are other places as well. Even Landmark Family Restaurant has a fish fry, and last time I checked it was under $10.

Takeaways: They have a really long bar, but it’s not as long as the one at Buck Bradley’s, and it doesn’t have clam chowder behind it; in fact, clam chowder wasn’t an option at all; our waitress was awesome; from what I remembered from previous visits, Café Centraal had a pretty pricey fish fry, but that actually was not the case; they have a lot of beers, or biers; I liked the beer battered fish a lot more than the potato chip battered, but I’m still glad they have both—I can’t think of another place that does potato chip batter; unique coleslaw as well; really great frites; I don’t like butter that is not soft; make sure you have like four hours after eating an all-you-can eat fish fry before playing a rock and roll show. 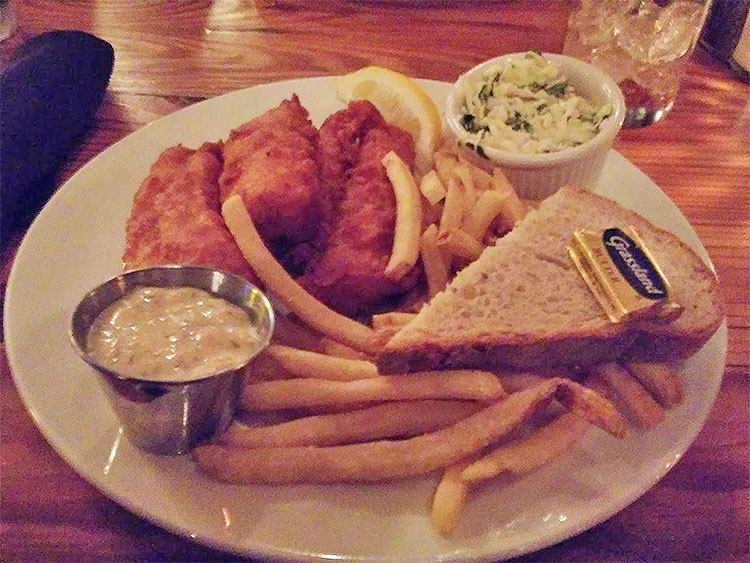