Near the corner of North and Cambridge avenues on Milwaukee’s East Side stands a curious piece of public art. A 22-foot-tall light pole juts out from a median in the middle of the road, its body adorned with an array of colorful and oddly shaped signs. The sculpture is “Compass,” created by Gail Simpson, and installed in 2003. But what is it? The artist explains:

“This sculpture takes the form of a destination pole with a spiraling cluster of signs related to this East Side neighborhood’s history and personality. The signs were inspired by the visual texture of the older streetscape that is still visible amidst the new, including older signs from businesses and merchants that are still present as the neighborhoods have made transitions. These signs are often unusually shaped and colored, and are evidence of the individuals and places that give a neighborhood its own flavor. The typefaces and shapes represent different time periods and styles. The pole is a recycled light post from the highway removal project.”

So what’s the deal with all the signs? In honor of this weekend’s Summer Soulstice Music Festival, we searched our memory banks and cracked open our Milwaukee history books to find out. Here are the 15 (mostly extinct) East Side institutions included on that North Ave. “Compass” sculpture, from bottom to top. (Big thanks to this photo and its commenters for a head-start on a few of the names.)

Oriental Drugs
It’s hard to comprehend the outpouring of grief that accompanied the closing of Oriental Drugs in 1995. The combination pharmacy/lunch counter/dime store had occupied the corner of North and Farwell for more than 65 years (it was built on the site of the Cream City Railroad streetcar barn), and its shuttering felt like a death in the family. More than two decades later, the bohemian vibe of the East Side fixture is long gone (though you can still occasionally spot an “I’m hooked on Oriental Drugs” T-shirt in the wild), and the space is currently the home of Chicago-based pizza chain Rosati’s Pizza.

Chute the Chutes
Where did Milwaukee go for thrills 100 years ago? Well, in a piece by local historian extraordinaire John Gurda titled “Where Milwaukee went for thrills 100 years ago,” Milwaukee went to the East Side. A “Chute The Chutes” (or “Shoot the Chutes”) water slide ride was once located above the Milwaukee River on North Ave., a stone’s throw away from where the “Compass” sculpture stands today. Featuring a large flat-bottom boat sliding down a ramp and into the river, the attraction was billed as “the most exhilarating sport of the age when you come to Milwaukee.” One ride cost 10 cents.

6 Points Trolley
Perhaps you’ve heard a thing or two about Milwaukee’s contentious streetcar (OH GOD THE STREETCAR) project. Perhaps, when they finally build the damn thing, you’ll ride it. Perhaps you won’t. Either way, it’s worth remembering that a streetcar line once existed on the East Side, covering the corners of North, Farwell, Murray, and Ivanhoe—better known as the “Six Points.”

Century Hall
If you were kicking around town during the 1980s you probably remember Century Hall for two things: being a venerable East Side alternative rock club (it was previously a bowling alley), and the fact that it burned to the ground. On April 24, 1988, the Fox Bay Co. building at 2324 N. Farwell Ave. exploded. (“The explosion was so big that the seismograph at the University of Wisconsin-Milwaukee picked it up,” says the Journal Sentinel.) Flames from that explosion spread to the next-door Century Hall and destroyed it, too, and damaged other buildings nearby. The blaze was so brutal that the Milwaukee Fire Department showed up on the scene with 25 body bags; remarkably, no one was killed.

Dick Bacon
Has there ever been someone so perfectly named as Dick Bacon? It’s been nearly 16 years since Milwaukee’s favorite nude sexagenarian sunbather split for that big tanning bed in the sky, leaving the city a little less weird and a lot less disturbingly bronzed. Bacon—a former brewery worker and Mr. Nude America (1973), Mr. Nude Apollo (1976), and Mr. Nude Galaxy (1977)—was a fixture of Bradford Beach from the 1960s through the 1990s, forever catching some rays and living the high life. Even Milwaukee’s unforgiving winters couldn’t stop the Bacon from sizzling—he simply laid out in his own foil-lined reflecting cubicle.

River West
Isn’t it weird when people lump the East Side and River West [sic] together into one neighborhood? Not that we’re complaining, of course, but what’s up with that?

Eats
The East Side’s food scene may not stack up to current culinary hotspots like Bay View and Walker’s Point, but it still has great “eats” where they count. Beans & Barley has been serving up healthy and delicious food (and occasionally surviving devastating fires) for decades. Pizza Man has been dishing out awesome thin-crust pies (and occasionally surviving devastating fires) for even longer. And don’t forget closing-time classics like Oakland Gyros and Ma Fischer’s. Toss in newer restaurants like Hotch and Asian Fusion, and you’ve got a neighborhood that still holds its own in the food department.

Milwaukee River
Last we checked the Milwaukee River still exists, though it’s been a while since we partied under the North Ave. Bridge. Some fun facts: the river is roughly 104 miles long, it figured prominently in the great Bridge War of 1845, and it’s awesome.

Frenchy’s
As mentioned above, Beans & Barley is one of the East Side’s best restaurants. Long before Beans occupied its distinctive triangular footprint, however, the site was home to Frenchy’s. Opened in the 1940s in the building next door (it moved to the future Beans spot in 1965), the restaurant was known for its swanky atmosphere, its French and American cuisine, and its distinctive French maid silhouette logo (included on the “Compass” sculpture). “Luncheons. Dinners. Gay and intimate. 1827 E. North Ave. Cocktails. Private Rooms,” went a typical advertisement. Frenchy’s closed in 1977, and its owner, Paul “Frenchy” LaPointe, died in 1981.

Easy Street
No clue. Anyone?

Pipkorn’s
Drive across the North Ave. Bridge from the east and you’ll find an unassuming Pick ‘n Save, some unassuming condos, and the soon-to-be-opened Adventure Rock rock climbing facility. Back in 1998, however, the site was a hotbed of controversy. Neighbors passionately protested the development of a Jewel Osco on the so-called Humboldt Yards back in the day, bemoaning the loss of more green space to commercial interests. But “progress” marched on and the Jewel was built, and eventually became a Pick ‘n Save. Before all that, however, the site was home to the Normal Pipkorn Company, a sand and gravel business that opened in the 1920s and closed in 1983.

Lake Michigan
Some Lake Michigan fun facts (it, too, is still around, by the way): it’s the only Great Lake located entirely in the United States, its surface area is 22,300 square miles, it reaches a depth of 923 feet, and it’s awesome.

Nite Life
Earlier this year we rounded up eight “cursed” Milwaukee business locations, including one that was once the go-to site for East Side night life (or “nite life,” if you prefer): the space below Beans & Barley. The site was formerly home to Shooter’s, Esoteria, Mantra Lounge, Decibel/DeepBar, and, most recently, The Library Club. Now, a mini-golf tavern is coming to the space. Take that as a sign of the current state of East Side night life if you will, but there’s still plenty of action to be had when the sun goes down. Hell, the Landmark alone—with its three bars and bowling alley—must count for at least a quarter of it.

Water Tower
It’s a given that most major public projects go over budget. Then there are major public projects that go way over budget. Take the North Point Water Tower, located on the far east end of North Ave. Construction of the tower began in May of 1873, with costs estimated at $8,000. When it was finished just over a year later, however, the total cost came to a whopping $50,891.82. Was it worth it? Well, the tower stayed in use until May 7, 1963, and was added to the National Register of Historic Places 10 years later. These days it remains a 175-foot-tall limestone East Side icon, and a popular destination during Doors Open Milwaukee.

Live!
Let’s just assume this last one refers to the general sense of life and excitement coursing through the neighborhood’s veins, and not the ill-fated sports bar that briefly occupied the site of the former Globe East (and the current Hotel Foster). Long live the East Side! 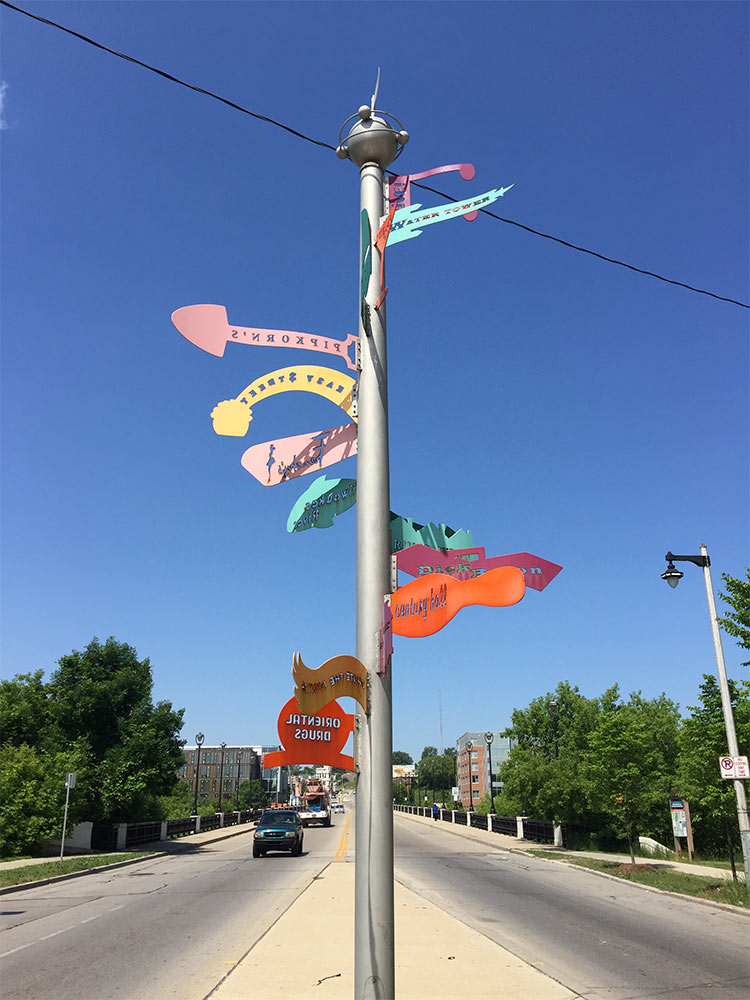