It’s a posh time to be water in Milwaukee. In the past couple weeks alone, the city’s water sources have made headlines: MillerCoors is donating $500,000 in an effort to improve the water quality and shoreline at South Shore Beach. Salon ran a story calling Milwaukee “the new Portland,” but not because we’re hip, progressive, or the subject of a Fred Armisen sketch show—it’s because of the city’s heightened focus on natural water resources.

In the hierarchy of the city’s most beloved water sources, that big ol’ sea to the east typically reigns supreme, but don’t sleep on the rivers that wind their way through the city and suburbs. After all, Milwaukee’s name is derived from the Algonquin “Millioki,” or “gathering place by the waters.” (And, yes, it also means “the good land.”) Sure, the Milwaukee River may find itself the brunt of plenty of mutant-ooze-related jokes, but if you spend some time on it, safe from the toxins floating within, it’s an incredibly interesting way to get a view of the city.

To show some love to this forgotten stepchild of natural water sources, we recently traveled along the Milwaukee River four different ways: by pontoon, group boat tour, kayak, and foot. If nothing else, exploring the river from whichever vessel you choose helps fill a weekend day in Milwaukee after festival season as closed, but before the city retreats indoors, never to see the light until the following May.

Pontoon
Even if you don’t have your own boat, you can still enjoy floating down the Milwaukee River the way us poors do it: by rental. The Milwaukee River Cruise Line offers private pontoon rentals from May through October, with options for two-hour, four-hour, and eight-hour rentals every day of the week. To get the full river experience, we chose the eight-hour rental, setting sail at 11 a.m. and filling the rest of the day with as many boat puns as possible until docking back up at 7 p.m.

With snacks and a cooler of beverages in tow, traveling down the river (as far north as Lakefront Brewery) as the captain of your own (rented) vessel is a pretty freeing experience. Dock up at any riverside bar or restaurant, hop off, grab a bite or a drink, then get back on and float off to your next destination. Our stops included Lakefront Brewery, The Harp, Barnacle Bud’s, and Horny Goat Brewing Co., grabbing one drink at each establishment. Just cruising up and down the river affords the opportunity to see the city from a different angle, without the hassle of navigating one-way streets or circling around to find parking. Feel free to blast as much yacht rock as you possibly can, because a rented pontoon might be the only place where Michael McDonald’s talents can truly be appreciated. Even though it’s fun to stay on the river, you’re free to make your way into Lake Michigan’s harbor, and if you time it just right, you can catch a pretty spectacular sunset view of the city from the lake.

Group boat tour
Riverwalk Boat Tours, located on the docks at Pere Marquette Park, want you to party, preferably while you sip down a few head-splittingly strong margaritas. Each evening of the week they host themed tours, whose titles are alliterated with abandon: Margarita Monday, Tiki Tuesday, Wine Wednesday, Thirsty Thursday, Funky Fridays, Social Saturdays, Sunday Bloody Mary Cruise, and Sunday Three-Brewery Cruise. The common theme here, if you hadn’t picked it up, is drinking. We hopped on board the Margarita Monday Cruise and were met with a spread of chips, salsa, guacamole, and mini quesadillas. The bar was stocked with traditional and blended strawberry margaritas, as well as Miller Lite, wine, and rail liquor.

Because of the emphasis on the party, as well as the boat’s covered top, we weren’t expecting much in the way of great views of the city, and since we’d just pontooned up and down the river two days prior, it wouldn’t be a great loss. But an unexpected treat of this tour was what met us when we arrived in the Lake Michigan harbor: some of the most stunning views you can imagine of the city’s skyline. We spent time circling the harbor as the sun was setting, casting fiery oranges, yellows, and pinks behind the silhouettes of the U.S. Bank Building, the Milwaukee Art Museum, and the Hoan Bridge. Our captain drove us into the McKinley Marina, giving us a view of the boats docked within. Then, we were taken under the bridge and into the inlet at Lakeshore State Park, seeing the Henry W. Maier Festival Park from an angle only the floating hole-in-one green can experience during Summerfest. It was pretty incredible.

Yes, they want you to party, but when noticing a gaggle of their guests whipping out cameras to snap pictures of the stunning sunset against the skyline, the captain slowed the boat down, affording everyone plenty of chances to get the perfect angle of the pirate ship floating in the harbor. What’s more, once the boat heads back into port around 8 p.m., it’s just dark enough that the city’s lights are shining bright in the buildings around you, reflecting on the water and putting on a seriously impressive display. 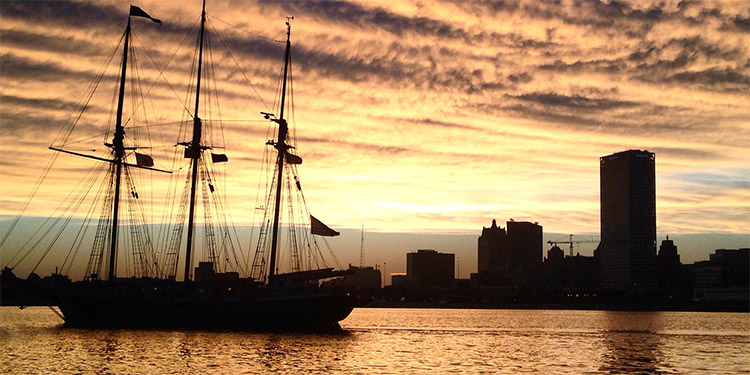 Kayak
For those who want to see the city from a lower vantage point, dipping a kayak in the river is a more health-conscious option for traveling Milwaukee’s waterways. Check out the Milwaukee Riverkeepers’ map of the city’s rivers and public slips, then put in your kayak where you please. The best part about choosing to kayak down the river (aside from, you know, exercising that badly ignored body of yours), is the relative freedom you enjoy while doing so. Whereas with renting a pontoon, you’re given boundaries from Lakefront Brewery to the north and Horny Goat Brewing Co. to the south (the Milwaukee River Cruise Line company doesn’t allow you to enter the Menominee River), and when taking a party boat cruise you’re at the mercy of your captain; when kayaking, you’re pretty much free to paddle wherever the hell you damn well please.

We headed out around 8:30 a.m. on a Sunday morning, paddling along a near-empty river. Heading out early is a relaxing way to begin the day, as you’ll stay clear of the aforementioned party barges and recreational boats that litter the river as the sun gets higher in the sky. You’re free to dock up to any public slip along the river, just as a larger boat would. When out on the river before 10 a.m., it’s a relatively quiet way to get from point A to point B. It’s also a healthier way to navigate the river; just dock your kayak, then stop for coffee, stop for brunch, and enjoy a little workout while you’re at it.

Riverwalk
If being on the water isn’t your thing, you can always admire it from a concrete slab a few safe feet above. Milwaukee’s Riverwalk stretches two miles on both sides of the Milwaukee River, connecting parks, hotels, restaurants, and bars. While it’s not the most beautiful stroll you’ll take, it does allow for a more peaceful walk through downtown than shuffling along Water or Milwaukee streets. More cultured pedestrians can enjoy the variety of public art installations in a series called RiverSculpture!, and pick up a pamphlet from any of the kiosks along the river that describe each piece. (If you don’t shed a tear while reading the backstory of Gertie the duck, you’re a monster).

The Riverwalk is awesome for getting a close-up view of some of the city’s architecture, including the glamorous vistas of the backsides of nondescript office buildings. Potted flowers and lighted archways pop up along the walk, dressing things up a bit, and if you choose to dine or have a drink at any of the restaurants along the Riverwalk, it makes for some pretty entertaining people (and boat) watching. During the weekday noon hour, the Riverwalk serves as a playground for the business-casual-clad, stretching out lunch hour as long as humanly possible before returning to the doldrums of their soul-sucking jobs. Try and time it so you can catch the exact moment when the joy washes from their faces before returning to work!