In late September, Mitchell Park Horticultural Conservatory‘s Tropical Dome became the second of the park’s three iconic domes to reopen to the public. As every Milwaukee man, woman, and child will recall, county officials abruptly closed the Tropical Dome, Show Dome, and so-called Desert Dome back in February soon after a chunk of fallen concrete was discovered in the latter. A long and convoluted saga ensued, one involving multiple campaigns to “Save the Domes,” hotly contested public hearings, controversial op-eds, plenty of political finger-pointing, and intimations of scrapping the aging landmarks altogether. Today, the National Trust for Historic Preservation included the Mitchell Park Domes on its 2016 list of America’s 11 Most Endangered Historic Places.

But, slowly, the Domes have been coming back online. Following the installation of a mesh safety netting system, the Show Dome reopened in April. Now, the Tropical Dome is back, too. Which means the beloved Domes that everyone was wailing to the heavens about back in February are positively hopping again, right? Well… 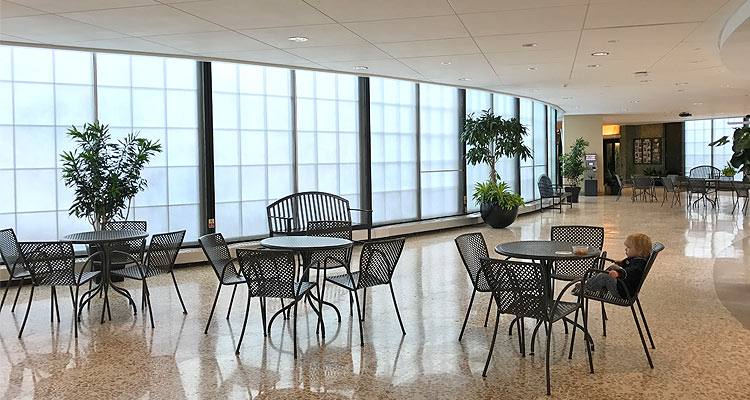 This past Sunday I decided to pay a visit to the Mitchell Park Domes. My mission was not to inspect the rehabbed wonder spheres and assess their viability and worth to Milwaukee County taxpayers, but simply to kill some time with my two-year-old daughter, who was in serious need of getting out of the house. I imagined I wouldn’t be alone; surely the public that had so passionately proclaimed its love for the Domes would be out en masse, supporting the endangered attractions and perhaps airing out their little rug rats as well.

Or not: On a chilly, cloudy, drizzle-y, non-Packers October Sunday—a perfect day to poke around the Domes!—my daughter and I were two of maybe a dozen total people poking around the Domes. I dunno, maybe 15 people. You know something’s amiss when you pull up to a place and a cranky two-year-old asks, “Is this open?”

But open the Domes were! Well, two of them, at least. After paying a five dollar admission (a discounted price until all three domes open), my daughter and I began our magical and largely patron-free adventure through a complex that began construction during the Eisenhower administration. Up first was the Show Dome, currently in the throes of its annual Fall Harvest Festival (though November 6). Scarecrows, pumpkins, hay bales, piped-in nature sounds, and approximately four other people taking pictures of flowers were the highlights. Looking to get in the autumn and Halloween spirit but don’t want to drive all the way out to Apple Holler? Not a fan of crowds? Get thee to the Show Dome! It’s delightful. 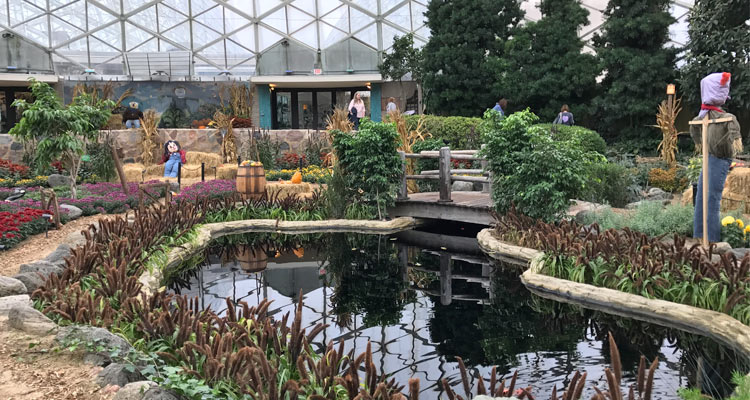 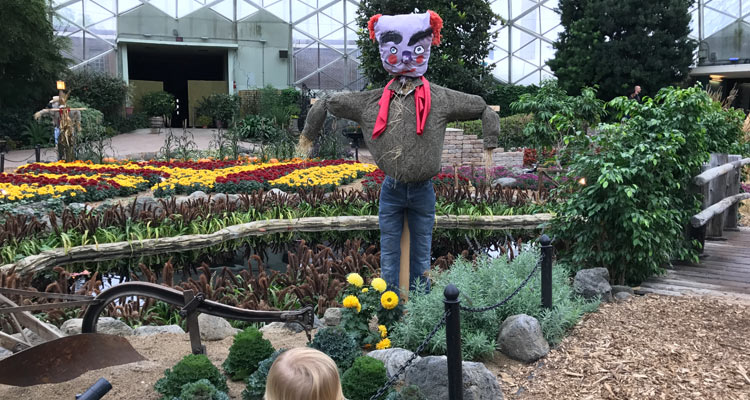 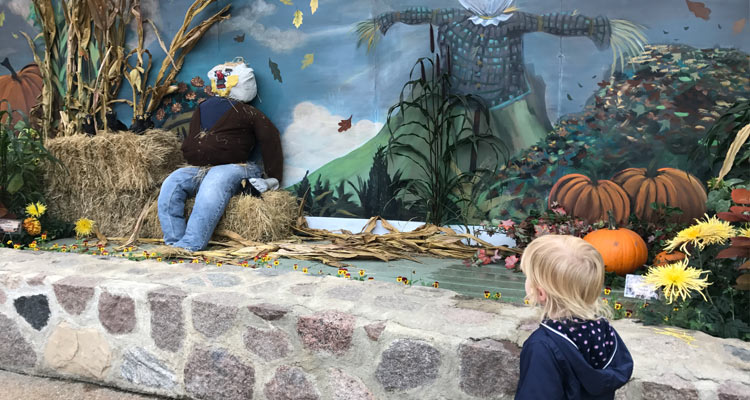 Here’s a picture of my daughter messing around with the “Control Your Crappy Kids” sign, kind of like when you and your friends would take a picture next to your school’s “Smoke-Free School Zone” sign, but you’d totally be smoking. Here’s to the crazy ones, the misfits, the rebels. 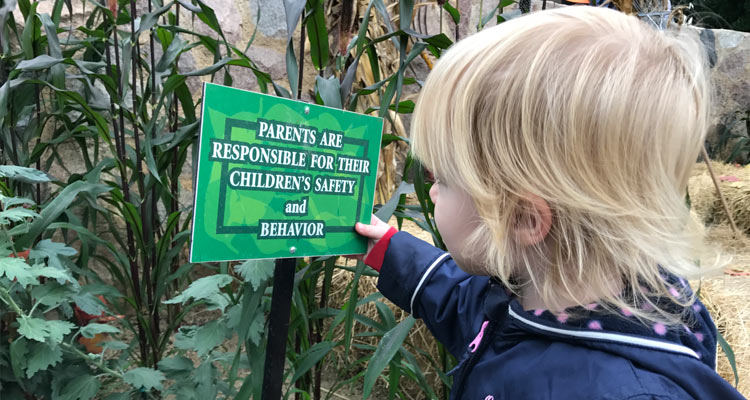 Next up was a Cheerios-and-applesauce-pouch break in the lobby. A couple of vending machines, one of those penny press things, and a kid being yelled at by his grandmother after trying to make off with a bag of popcorn from the “Gifts Under Glass” gift shop awaited us. Oh, and Frank Sinatra’s greatest hits, which, to paraphrase Douglas Adams, drifted through the air in much the same way that chunks of concrete don’t.

Oh, and there were very few people. 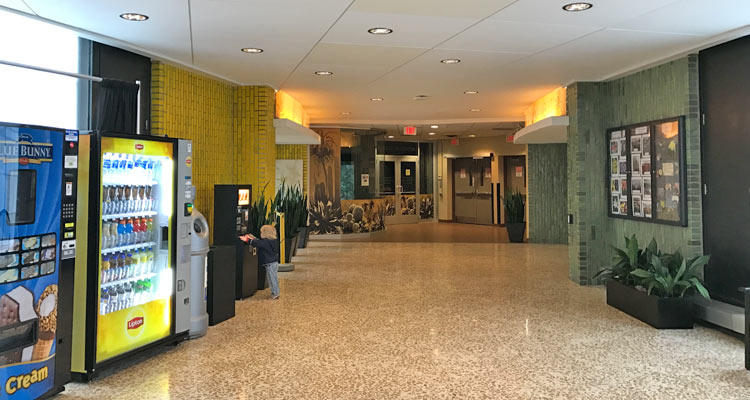 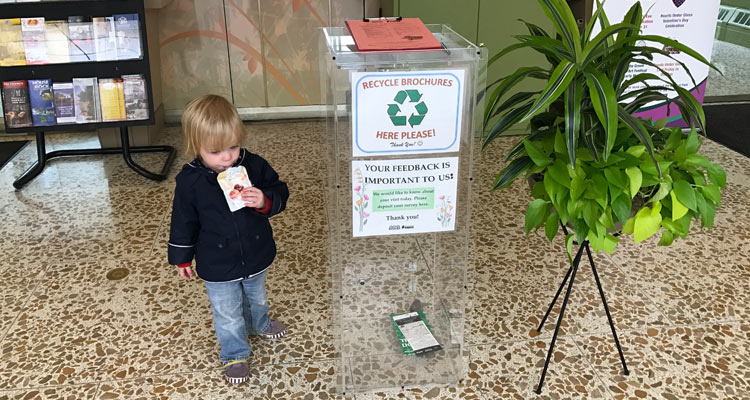 The doors to the still-closed Desert Dome, meanwhile, were blocked off with some plants. No matter—after my daughter pushed the automatic door button (kids love these things), one of the doors simply swung open. Huh. Nearby was a bulletin board filled with “Desert Dome Observations” and pictures of blooming cacti. “Since you can’t experience the cacti this season,” a sign read, “we’re bringing their flowers to you! (In pictures, anyway!)” It was the kind of delightfully adorable and vaguely heartbreaking display that perfectly summed up the ever-so-quaint and kitschy Domes, and a bit of DIY craftiness that reminded me of my daughter’s day care project where her class took a walk in the woods and some kid saw a worm or something. 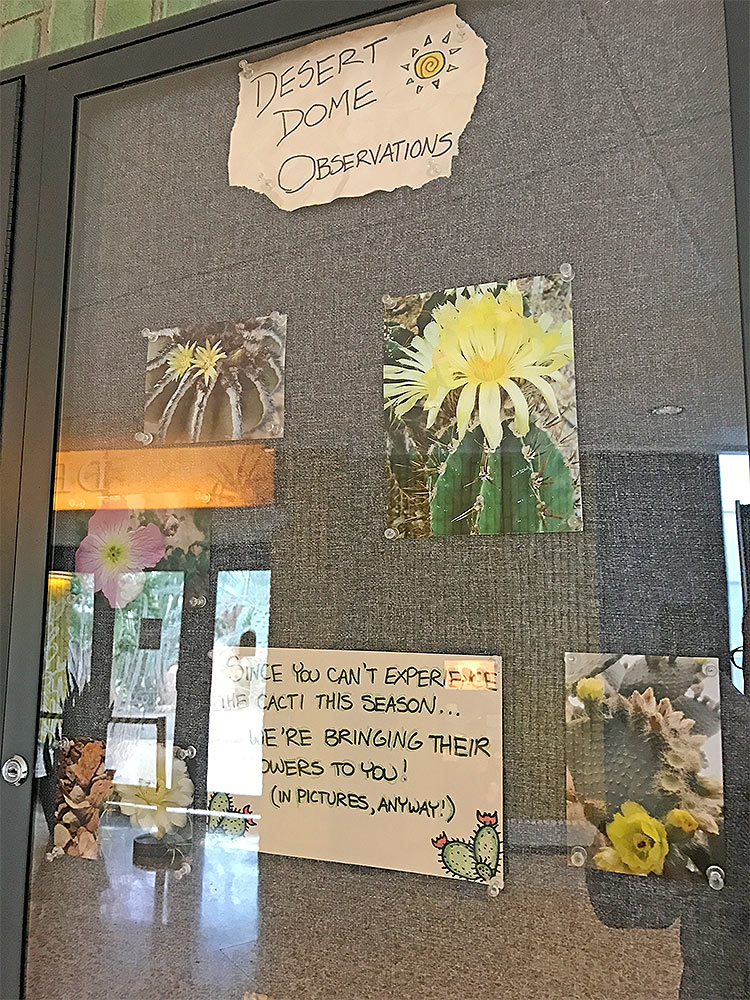 Finally, it was time to bask in the humid pleasures and “Caution: Wet Floor” signs of the Tropical Dome. Is there anything better than the Tropical Dome? No, no there is not. Towering trees and vegetation, winding paths and hidden nooks and crannies, a nifty waterfall, a koi pond complete with a wooden bridge, and live birds all call this unlikely attraction home. 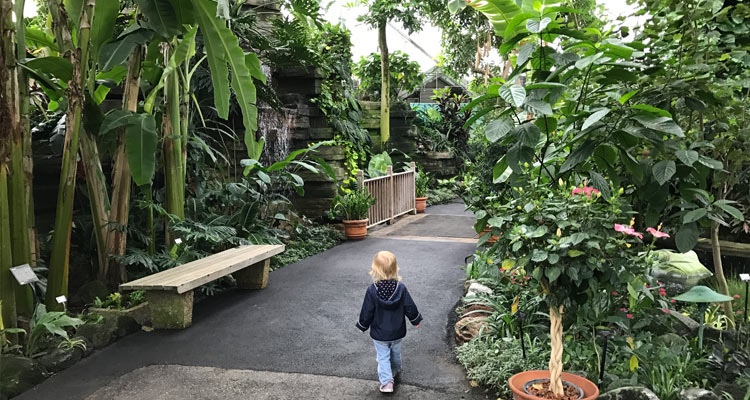 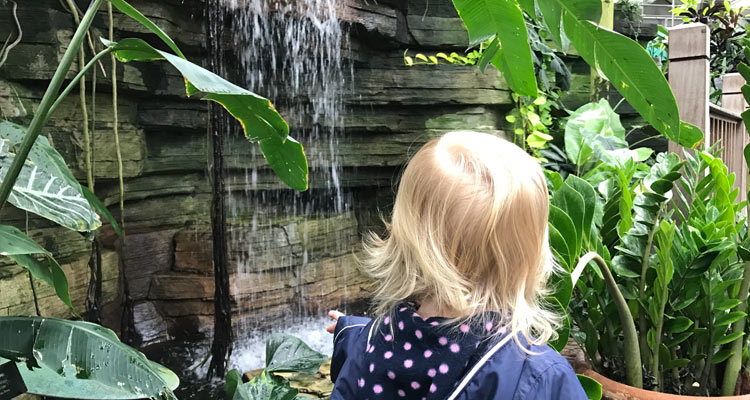 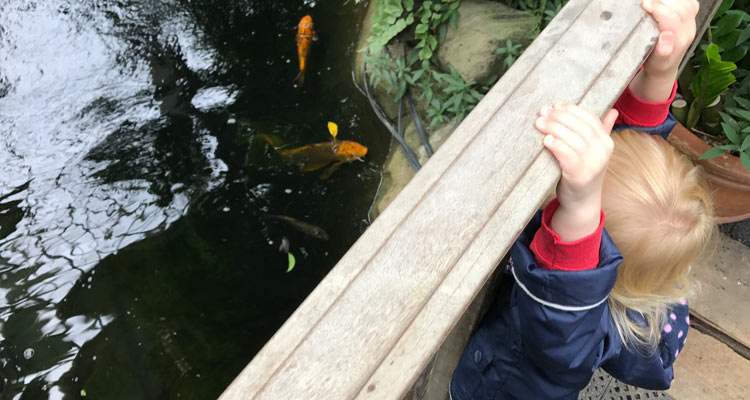 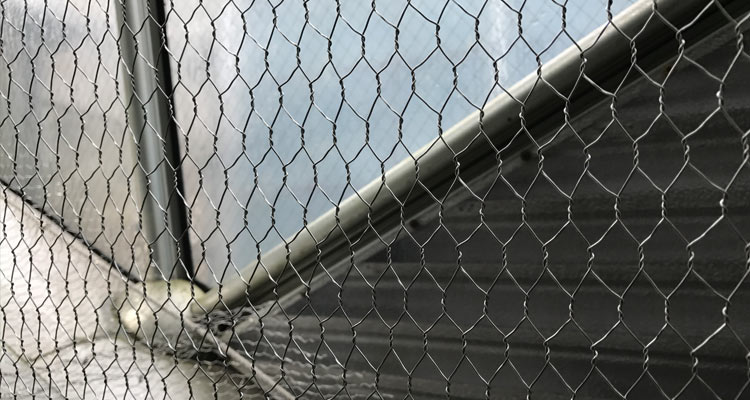 And that was our trip to the Domes! A 1 p.m. no-nap toddler breakdown occurred soon after we exited the Tropical Dome, so I packed up our shit and hit the road. Did I mention my daughter and I were two of maybe a dozen people mucking around the Domes over the course of 90 minutes? On a chilly, cloudy, drizzle-y, non-Packers October Sunday? Seriously, it was a Packers bye week. Yes, I think I mentioned that.

Taking a look at Domes FAQ, it appears that attendance at the Milwaukee County attraction has risen by 28 percent in the past five years: 187,658 people checked in in 2011, while 240,179 made the pilgrimage in 2015. According to the Milwaukee Business Journal, “the Domes ranked 14th in attendance among top Milwaukee-area attractions in 2014.” That’s nice, though it still seems kind of puny to me, especially considering the hoopla that was raised back in February. The Brewers, even during a rebuilding year, pull in at least 27,000 people per game. The Wisconsin State Fair, meanwhile, plays home to more than one million people over the course of just 11 days. So where’s the love for the supposedly beloved Domes? I didn’t see a whole lot of it on Sunday.

But maybe I’m being unfair. Maybe it was an off day. Maybe folks aren’t aware that any of the Domes are currently open. Yes, judging Milwaukee’s fidelity to its embattled landmark based on a single visit is probably a bad idea. And yes, the Domes will likely be back to buzzing once the weekly Winter Farmers Market sets up shop November 5 (through April 8, 2017). Oh, and the Desert Dome should be open again in November. And there’s a bunch of other stuff on the docket, too. But I can’t help feeling that the Domes’ uncertain future is a lot like the demise of record stores: everyone bemoans their slow extinction, but when pressed about how often they patronize the fading establishments, everyone is suddenly mum.

And I include myself in that silent group of infrequent Dome-goers. I decried the County Executive’s apparent lack of interest in the Domes along with the rest of Milwaukee earlier this year, but until Sunday, my most recent visit had been back in January 2015. Are the Domes a once-a-week destination? Probably not, but surely I—and others—can do better than once every 20 months.

Back in February, I wrote another piece involving the Domes and my daughter: “Parents: It’s cold and the Domes are closed, so take your kids to the Shops of Grand Avenue.” The “joke” in that piece was that the long-struggling downtown mall was largely empty, and that it was the perfect place to let a kid run wild and go nuts on a chilly afternoon. Let’s make sure the Domes don’t end up being the first part. 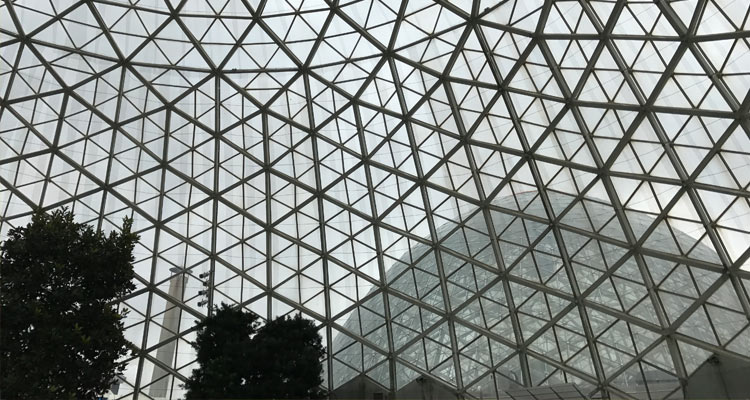