Anyway, as parents of a toddler, my wife and I were recently faced with what I imagine is a common dilemma: What the fuck are we supposed to do with this kid in the winter? There’s no shortage of kid-friendly shit to do in the summer—parks, pools, endless walks around the block—but when the temperature dips into the single digits, you’re screwed. You can’t take them outside, you can’t let them run down to the CVS to pick up a pizza and a two-liter bottle of Mountain Dew, you can’t do anything. Once kids get past the “half-sentient immobile mass of blubber” baby stage, they need to move. So, you have a toddler, it’s cold outside, it’s the weekend (no daycare!), and everyone is stir-crazy. What do you do?

Last month, on a sub-zero and endless Sunday afternoon, my wife and I stumbled upon the answer: take your kid(s) to the vast and empty playground that is the Shops of Grand Avenue. Believe me, it’s fucking brilliant. 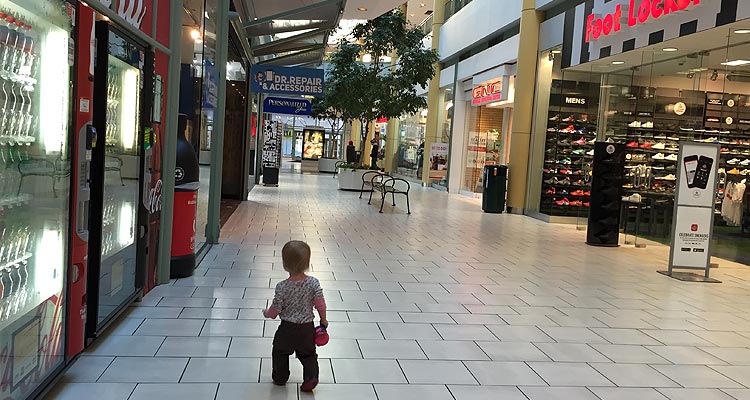 First of all—and perhaps you’ve heard this before—the forever-troubled (but rebuilding!) downtown mall is kind of dead. There aren’t a lot of stores, and, save for the food court during weekday lunch hours, there aren’t a lot of people. On my family’s first “let’s get the fuck out of the house” Sunday visit, we arrived around 2 p.m. Prime shopping time it wasn’t. But the second we plopped our daughter down in the middle of the faded majesty of the Plankinton Arcade, her eyes grew as wide as the vacant space that used to house Suncoast Video and Sam Goody. All of this is mine? I can run around in this giant, mostly empty mall, and no one will stop me? Yep, you betcha kid. Go nuts.

And go nuts she did. She squealed in delight as she trotted up and down the empty halls. She laughed as she explored the nooks and crannies of the old Radio Shack, the old GAP, and the old Old Navy. She guffawed as she dicked around in the lonely doorway of what used to be that pen store (it’s now a temporary tax return place or something). She marveled at the hidden basement wishing well, right next to the offices of TRUE Skool, NEWaukee, the Underground Collaborative, and the terrifying ghost of the International Clown Hall of Fame. Remember that scene in Vanilla Sky when Tom Cruise is running around an empty Times Square? IT WAS TOTALLY LIKE THAT. 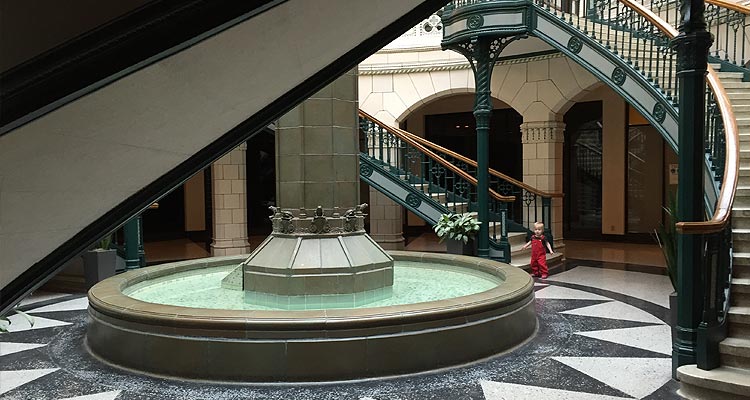 You might think the mall would only be fun for children—and, hell, adults—during the months before Christmas, when the venerable Leonard Bearstein Symphony Orchestra is doing its thing on the ground floor. NOPE. Along with the aforementioned activities, you can cruise the escalators, grab some popcorn from the popcorn wagon, teach your kid how to tell time using that giant clock, and regale your family with stories about how you and college roommate used to take the bus to the mall at least three times a week and buy old NES games at that used CD store, back when used CD stores were a thing and a copy of Dragon Warrior III didn’t cost a fucking arm and a leg. Oh, and you can ride the see-through elevator in the middle of the mall. It’s exactly like the magical glass elevator from Willy Wonka, if the magical glass elevator from Willy Wonka picked up outside a cell phone kiosk and dropped off in front of a Panda Express. 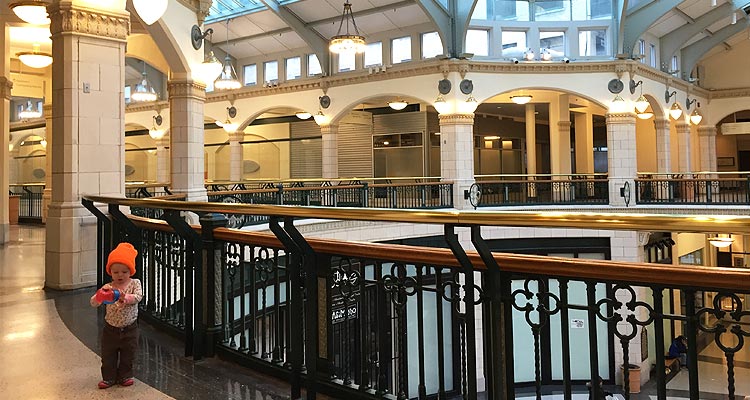 Now, don’t get me wrong, there’s plenty of actual shit to do in the mall. My wife grabbed some coffee from Stone Creek. We bought a sippy cup and some winter socks at T.J. Maxx. I browsed some used Xbox games at GameStop. While my wife did a “Well, I guess I’ll see if there’s anything in Boston Store” run, my daughter and I sat down to a slice of Rocky Rococo (she liked the breadsticks). The fruit and vegetable cart in the Plankinton Arcade provided us with our weekly supply of toddler food. At one point, I may have bought a bottled water from a vending machine.

Another thing: provided your kid isn’t a screaming shithead or whatever, people love to see a goofball toddler stumbling his or her way through the cavernous mall. Errant patrons smile. Bored employees beam. Security guards take time off from telling you you can’t take pictures in the mall to say “Awww!” or “And what’s your name, little lady?” You’re not just giving your kid something to do and saving your sanity in the process, you’re performing a goddamned public service. 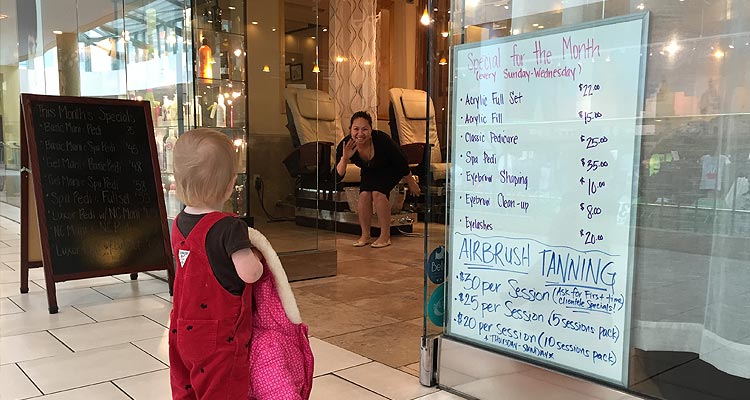 So yeah, we ended up killing two hours that Sunday, and we’ve been back almost every Sunday since. And now, with the Mitchell Park Domes closed indefinitely, we’ll likely be back next Sunday. And why not? It’s fun, it’s free, and it’s warm. So, if you’re looking to burn some energy off your little rugrat this winter, you could do a lot worse than a late-afternoon weekend trip to the Shops of Grand Avenue. It’ll provide you and your snot-nosed little goober with all the activity and visual stimuli of a real mall, but with virtually none of the people. God bless Milwaukee.

Oh, and if your kid does throw a temper tantrum, just remember: in (mostly empty retail) space, no one can hear them scream. 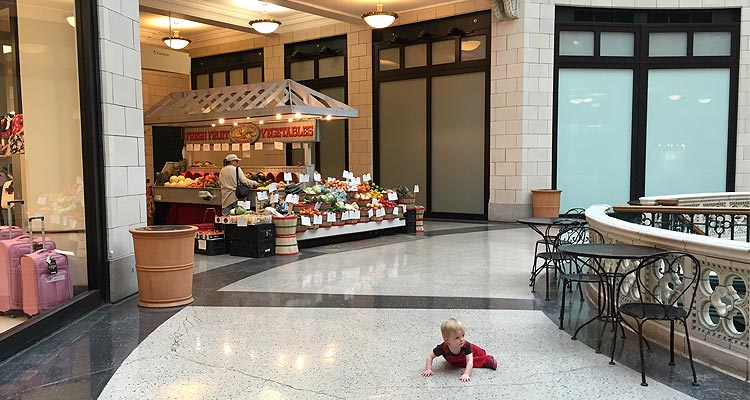