Last Wednesday, by complete chance, I connected with Buffalo Nichols on Instagram after seeing a clip of him playing at Evanston Space, a venue in Evanston, Illinois, where I attended college.

At the time, I had yet to make the connection that this was, in fact, Carl Nichols, most well-known locally as half of now-defunct Americana act Nickel&Rose. I shared the video to my story and we traded a message or two, but I didn’t think much of it until Friday, when I happened across a Milwaukee music roundup by the Journal-Sentinel’s Piet Levy in which both of us were featured.

It was at this point that everything clicked. I learned that he was playing a show Saturday night at the Back Room @ Colectivo, so I grabbed myself a ticket! I was, admittedly, looking forward to the event, but let me tell you: nothing could have prepared me for what I witnessed. This was perhaps the most impressive solo show I’ve ever seen. From the beginning, Nichols was disarming, exhibiting a down-to-earth charm so wildly authentic one couldn’t help but be drawn in. At one point, he even inspired audience-wide laughter while joking about not being able to say something funny between every song. 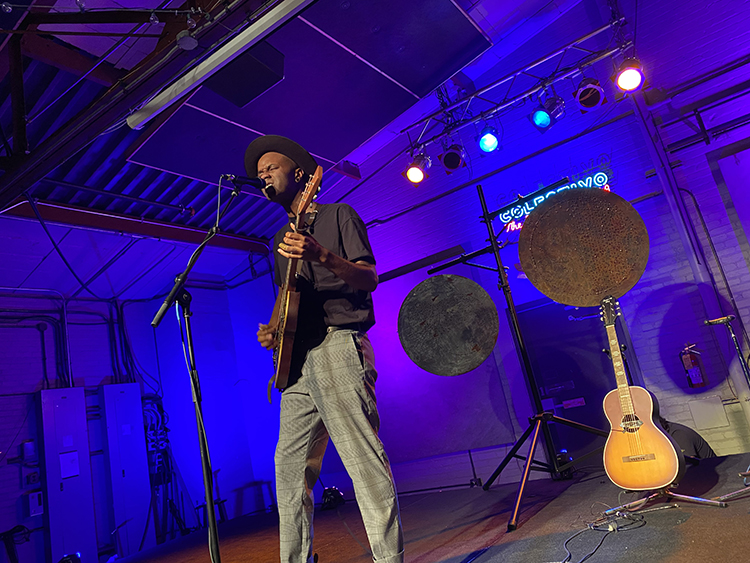 From his red boots to the custom-made guitar or the out-of-the-ordinary capo that looked like a cheese slicer and vice grip made babies, everything about Nichols is strikingly original. And the music speaks for itself. The guitar rhythms and electronic kick drum create a driving sound that’s hard to turn away from. His chops are so out-of-this-world it was challenging, just as an observer, to keep up with some of the licks. And while his voice isn’t the focal point of the show, Nichols, who recently signed to Fat Possum Records, employs a deep, soulful tone that’s so smooth that it’s easy to get lost in.

He opened the show with a rendition of “Lost & Lonesome,” the lead single off his self-titled debut (out October 15), which included a winding, ethereal guitar introduction, a perfect invitation into Nichols’ world. It’s one filled with themes of loneliness, wandering, love that falls short and, ultimately, a drive to transcend the madness. Nichols seems to be sorting through the pain of lies and misfortune of existing in a reality that leaves a lot to be desired. “I had to ask the question: how you learn to love like that? / she tried to answer as she pulled the knife out of her back / yeah, and when I ask the question: how you learn to love again? / you’re gonna suffer anyway but it’s better with a friend,” sings Nichols toward the end of “Lost & Lonesome.”

The most poignant moment, for me, came during a song called “How to Love”—another off the upcoming album—where Nichols opines “the way you hurt me taught me how to love.” He tells of a past relationship filled with pain and heartbreak, wondering how the person who hurt him could hardly injure a fly these days before concluding: “the way they hurt you taught you how to love.”

The entire hour-long set was filled with this unique brand of soul-searing honesty and introspection. Nichols’ singular personality shines through in every tune. And, in the end, it’s Nichols himself—the one-of-a-kind songwriting, lightning-fast fingers and silky smooth pipes—that you’re left wanting just one more slice of before the night ends.