• We’ve said it before and we’ll say it again: if there’s one thing Milwaukee loves more than its county parks, it’s going ballistic at the idea of “privatizing” its county parks. Back in January, Milwaukee County Parks responded to multiple stories suggesting Bradford Beach would be “privatized” with the approval of a semi-permanent modular container bar on the upper deck of Bradford’s beach house. The container bar is the brainchild of Illinois-based The Dock Bradford, LLC, which has operated Bradford Beach’s concessions—including the beach house and tiki huts—since 2019.

“The beach is NOT being privatized and NOT being sold,” Milwaukee County Supervisor Sheldon A. Wasserman said at the time. “Bradford Beach has been working with private vendors for many years, and The Dock has been a partner of Milwaukee County Parks for the last two years. They clean the public bathrooms and help maintain the sand and the pavilion itself. They’re also responsible for rolling out the ‘RampUpMKE’ accessible ramp.”

Now, ahead of a technical review, Milwaukee County Parks is once again reminding folks that the container bar does not equal privatization, that the building “is still owned by Milwaukee County Parks, and public access to the upper level is still a requirement,” and that “the greatest threat to public access is lack of funding for maintenance and repairs.” (The Dock was the only company to respond to a Request for Proposals when a new vendor was being sought in 2019, following the departure of SURG Restaurant Group.)

Here’s the department’s full statement, released this week on Facebook:

Plans for an expanded food & drink operation at Bradford Beach will undergo technical review by Milwaukee County Parks this spring.

The Bradford Beach pavilion has been used to provide food & drinks to beach-goers for the past 15 years, with The Dock LLC operating there for the past two years. This summer The Dock are proposing to expand their food & drink offerings by adding a modular ‘container bar’ and additional seating to the largely unused upper level of Bradford beach pavilion. The bar is designed so that it can be easily removed in the future should the lease with the Dock end.

The Dock’s plans for the new addition have been reviewed by the City of Milwaukee, the Milwaukee Historical Preservation Committee and the Lakefront Development Advisory Committee (LDAC), – a public committee who review all major projects on the public-owned lakefront land, and now the Dock’s proposal is being reviewed by Milwaukee County Parks.

When the previous operator decided to cease operations in 2018, Milwaukee County Parks issued a Request for Proposals (RFP) for a new vendor in early 2019. The Illinois based Dock LLC were the only company to reply to that RFP and agree to its terms – which include paying the County 5% of gross sales as well as a minimum of $100,000 towards a Park Improvement Fund, for the purpose of funding maintenance and repairs at the aging 1950’s beach pavilion.

As well as selling food and drink from the concessions stand and operating the ‘cabana huts’, staff at the Dock are required to regularly clean litter from the beach and clean and maintain the public bathrooms. This partnership will hopefully allow Milwaukee County Parks to focus more of our seasonal staffing dollars into roles such as lifeguards.

As with the vast majority of our public-private partnerships, such as Estabrook Beer Garden, the PEAK initiative at Tiefenhaler Park or the Philippine Center at Zablocki Park, our partnerships require that buildings remain owned by the public, and that adequate public access is maintained. The proposal from the Dock is no different – the building is still owned by Milwaukee County Parks, and public access to the upper level is still a requirement.

Dock staff are also helping increase accessibility at the beach for all—as they are responsible for lending out beach wheelchairs and managing the beach mats that allow wheelchair users to access the water.

Bradford Beach is also covered by Wisconsin’s Public Trust Doctrine, which declares that all navigable waters are “common highways and forever free” and held in trust by the State of Wisconsin. Any business holding a lease at the lakefront, including the Dock, Gift of Wings Kite Shop or jet ski rental companies, must follow the Doctrine and ensure public access.

Increasing access to public spaces is one of the main focuses of Milwaukee County Parks – and this proposal will be reviewed with that in mind. Currently, however, the greatest threat to public access is lack of funding for maintenance and repairs. Just last year, for instance, many bathrooms and amenities had to be kept closed over the summer due to budget reductions for seasonal staffing. At Bradford Beach the footbridge across Lincoln Memorial Drive also had to be temporarily closed due to unsafe conditions, and the North Point parking lot is currently reduced in size due to high lake levels dumping large debris in the lot.

The right partnerships can help raise funds for these needed repairs, increase access and provide a much-requested service, so Milwaukee County Parks staff are now reviewing the proposal from the Dock, as well as feedback from five public meetings, to determine if it will be in the best interests of beach-goers at Bradford Beach.

Additional questions and answers can be found in the Facebook thread: 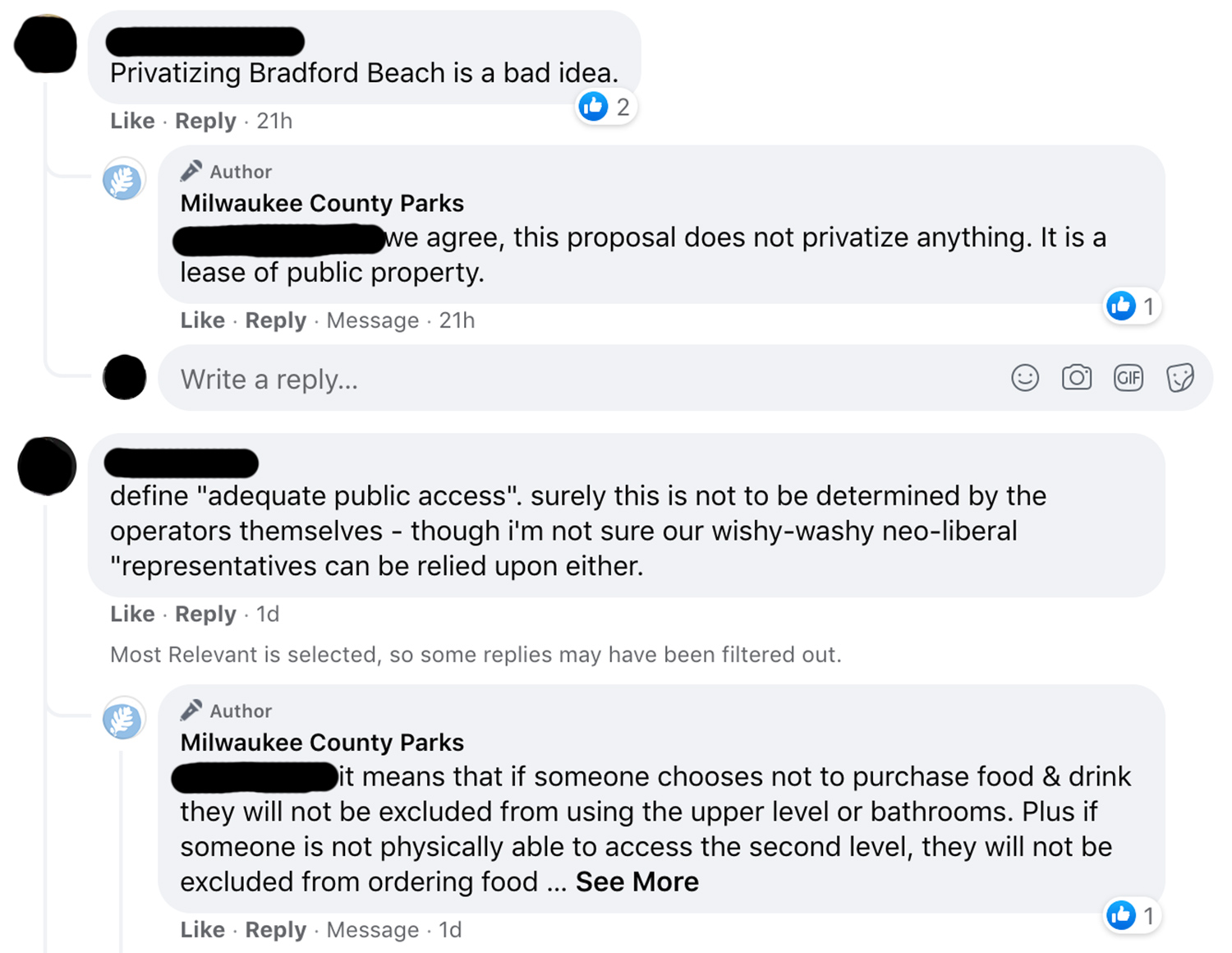 • In other privatizing-but-not-really-privatizing news, the City of Milwaukee Health Department has contracted with a private company called Elite Process Service LLC to help with the whole “issuing citations to businesses violating local health orders” thing. The company will serve as “additional workforce” only, and the City will remain the only entity able to issue citations. “In February,” says Urban Milwaukee, “the health department reported receiving more than 1,500 complaints and investigating 1,230 of them.” [Urban Milwaukee]

• Another cancellation: Port Washington Fish Day will take another year off due to the COVI-19 pandemic. [Milwaukee Journal Sentinel]

• New Arctic Sleep record! It’s a two-song soundtrack to a comic series called By The Horns which is about…well, we’ll let the band explain:

Elodie has vowed to kill every last unicorn in Solothus for trampling her husband. But to make unicorns extinct she’ll need to fake an alliance with two of the very beasts she hates most, and battle four wind sorcerers who are extracting magic from all the mystical creatures on the continent. Fortunately, Elodie’s unwitting allies have granted her the ability to rip off their horns and combine them to form wizard-slaying weapons. Will she use their gifts to save magic, or destroy all the unicorns left alive?

• And finally, in this week’s delightful Trixie Mattel news, the Milwaukee drag superstar is creating a new menu item for—wait for it—Chipotle! The all-vegan “Eyes. Chips. Face. Bowl.” features “white rice, pinto beans, roasted chili-corn salsa, tomatillo-red salsa and guacamole, with a side of tortilla chips.” Get it while it lasts from March 10 through 17! Oh, and have a great weekend, Milwaukee! [Milwaukee Journal Sentinel]