First up, Bradford Beach. “Hearings Scheduled about Proposed Privatization, Loss of Public Access to Bradford Beach’s Historic Bathhouse,” proclaims a recent Shepherd Express headline. The accompanying story details how “Bradford Beach’s public pavilion overlooking Lake Michigan might soon be cordoned off regularly from the public for private parties, and otherwise function as a pricey bar-and-dining establishment.” You see, The Dock Bradford, LLC (“of Park Ridge, Illinois, a Chicago suburb,” the Shepherd ominously notes) has plans to install a semi-permanent modular bar on the beach house’s upper deck and make the area available for “private events, including bachelor/bachelorette parties and corporate outings.” The Dock Bradford, LLC has operated Bradford Beach concessions—including the beach house and tiki huts—since 2019.

On Tuesday, Urban Milwaukee ran a recap of the first of two hearings dedicated to the matter. “Bradford Beach concessionaire Dock Bradford is advancing a plan to turn the historic beach house into a restaurant, but would maintain public access to restrooms and other facilities,” the article begins. It continues:

A modular bar would be constructed on the open-air second level of the structure. Seating would be added to both levels, but the company dropped plans to add shipping containers to the facility after the Historic Preservation Commission rejected the proposal in August.

“The only actual infrastructure would be that modular bar,” said Dock Bradford partner Nick Hynes. An existing kitchen on the first floor would be maintained.

Individuals would not be able to sit in any of the new chairs without being a dining customer. Existing seating, including the more heavily used benches in the southeast corner, would remain open to the public. The restaurant will provide table service.

There has been an enormous amount of misinformation regarding the proposed changes to the Bradford Beach bathhouse floating around. The beach is NOT being privatized and NOT being sold. Under the terms of the County’s current lease, The Dock is proposing to expand their food and beverage service to the currently vacant second floor of the bathhouse.

The removable modular bar being proposed has been approved the City of Milwaukee Historic Preservation Committee. The City of Milwaukee Department of Neighborhood Services is still conducting an Americans with Disabilities Act review of the changes.

Bradford Beach has been working with private vendors for many years, and The Dock has been a partner of Milwaukee County Parks for the last two years. They clean the public bathrooms and help maintain the sand and the pavilion itself. They’re also responsible for rolling out the “RampUpMKE” accessible ramp.

Additionally, the County Board does not have the authority to approve or deny this proposal. The proposed change is within the terms of the lease approved by the County Board in 2019. I encourage anyone interested in the most recent proposal to read the related legislative file.

Our County Parks are facing an enormous fiscal challenge that has only been exacerbated by COVID-19. Public-private partnerships like this generate revenue for our Countywide parks system and help keep our facilities open and clean.

Last month, I sent a survey to thousands of District 3 residents and included the question: “Should the food vendor at Bradford Beach expand the footprint of their restaurant into the upper level of the Bradford Beach bathhouse?” To date, I have received over 500 responses with 78% (390) answering “Yes” and 22% (111) answering “No.”

I appreciate the constituents that have reached out and voiced their opinions. The public will still have access to the bathhouse. No one will be forced to buy concessions and the beach is not for sale.

Now for county trails. “Trail Fees for Milwaukee County Parks Proposed—and Dropped for Now,” proclaims another recent Shepherd headline. The story looks at a survey from Milwaukee County Parks, and a survey question about a supposed “pay-to-play scheme.” “Would you be willing to pay to use trails if it resulted in improvements and expansion?” reads the question. “Will walkers, joggers and bicyclists continue to enjoy free and unfettered access to Milwaukee County’s public trails?,” the Shepherd asks. “Maybe.”

The rest of the article, however, quotes official after official denying such a program is in the works, or calling such a program voluntary at best/worst. “We are not looking at implementation of a trails pass in the immediate future, and, furthermore, if a program like this was implemented it would likely be voluntary,” says Jen Francis, deputy director of the parks department. Says Wasserman: “I absolutely do not want trails to be taxed or tolled. That would be devastating for our parks and offensive to many people who rely on them. I would never support that.” 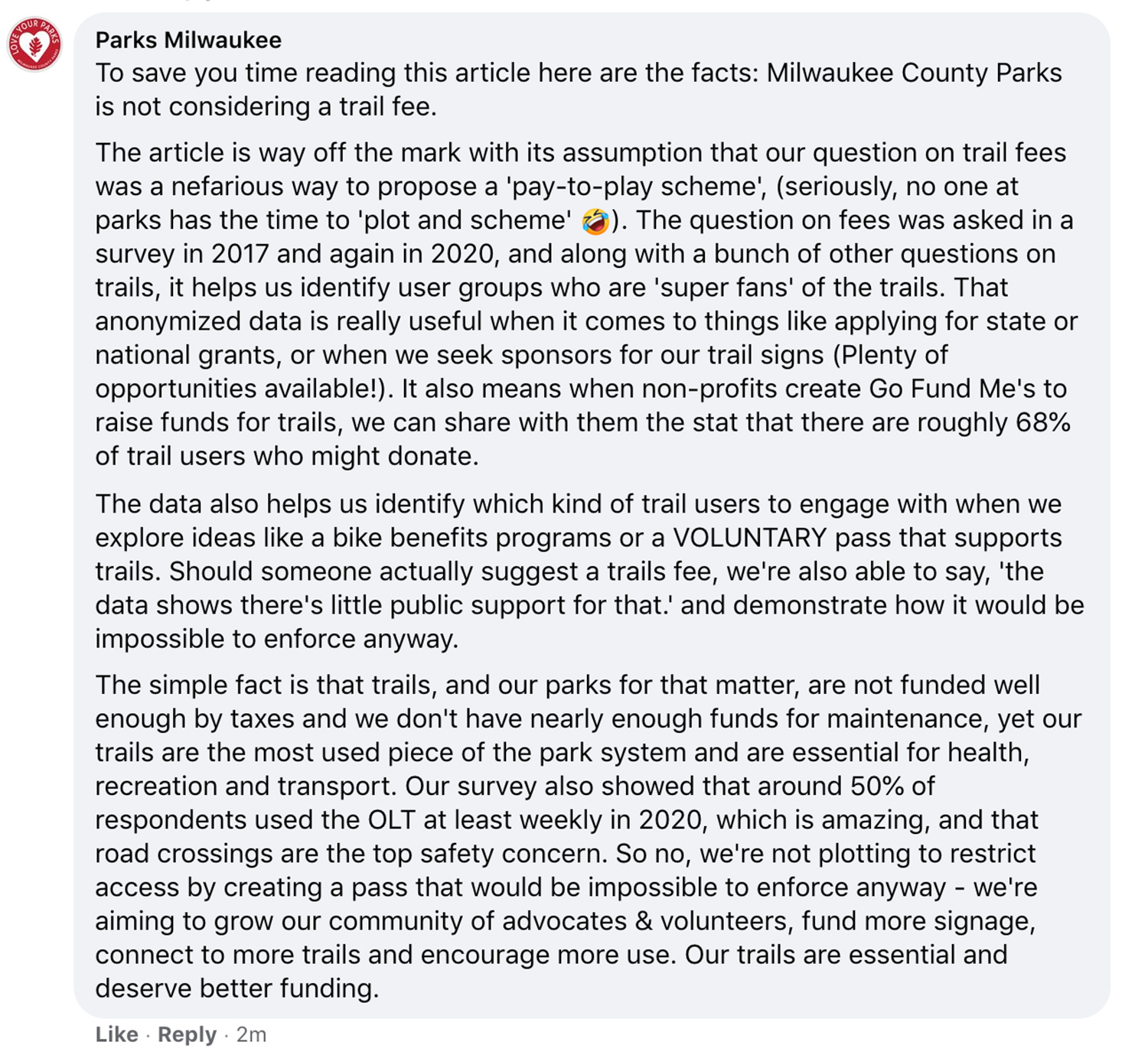 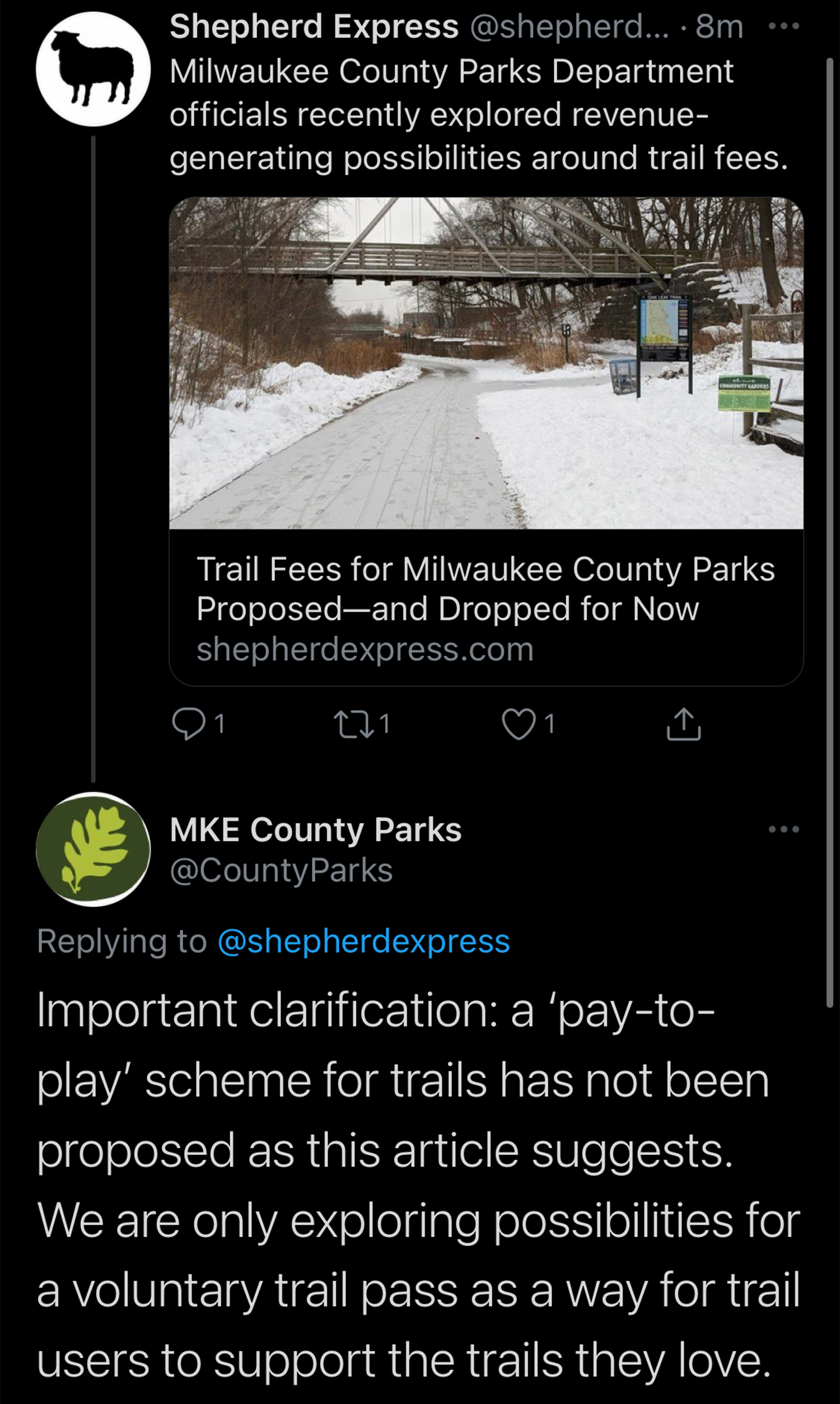 A formal press release hasn’t materialized yet, but hey, it’s only Wednesday.

• Mandatory Milwaukee: Milwaukee County Parks are a godsend in a socially distant summer

• Mandatory Milwaukee: Exploring the city (and the entire county) with the Oak Leaf Trail

• No one wants to run Bradford Beach and Northpoint Custard this summer, apparently