Last week, the Milwaukee Brewers unveiled a slew of new and upgraded concessions coming to Miller Park in 2017. There was a fair of amount of excitement from Brewers fans—Local beer! Smoke Shack ribs! Tacos!—but also a fair amount of grumbling. “Why not spend that money on the team?” went the typical grumble, usually with added expletives and/or disparaging emojis. An opening 0-2 record this week has only added fuel to the fan frustration flames.

Yes, the Brewers are in full rebuilding mode this year. Few expect the team to finish .500. And yet attendance will likely be robust—falling, once again, somewhere in the two million range. Could it be that the team taking the field in any given season pales in comparison to the best thing about the Milwaukee Brewers: Miller Park? (Okay, the second-best thing.)

Maybe. Still, the stadium has seen its share of controversies over the years. Similar to the contentious Milwaukee Bucks arena of today, Miller Park was built with public funds—hundreds of millions of dollars of public funds, via a five-county 0.1% sales tax enacted on January 1, 1996. The move proved so unpopular that the state senator who cast the deciding vote in the matter, George Petak of Racine, was later recalled. Oh, and even though the tax was slated to end in 2010, it’s still going strong today. It’s expected to finally sunset in 2018. Or 2019. Or 2020.

Groundbreaking took place on November 9, 1996. Miller Park was meant to replace the aging County Stadium in 2000, but that plan was delayed when, on July 14, 1999, the 1,400-ton Big Blue crane collapsed while lifting a 400-ton roof piece 200 feet in the air, killing three members of Iron Workers Local 8: Jeffrey Wischer, William DeGrave, and Jerome Starr. Today, the men are honored by a bronze sculpture, Teamwork, located outside the stadium.

Miller Park officially opened on April 6, 2001 (County Stadium was demolished earlier that year), and it wasn’t long before its unique fan-shaped retractable roof became problematic. Multiple leaks plagued early Miller Park games, including the 2002 Home Run Derby. The roof was never designed to be watertight, however, and leaks continue to this day. On average, between $10,000 and $25,000 is spent on roof repairs every year.

Speaking of the 2002 Home Run Derby, the very next day was the infamous 2002 MLB All-Star Game, which ended in a contentious tie after both teams exhausted their pitching rosters. Everyone was pissed, including Sports Illustrated writer Tom Verducci:

Keep the game out of Milwaukee. It’s a fine, friendly city, but let’s be honest. The only reason the game was held in Milwaukee was because Selig helped use it as a chip toward getting taxpayers to help build him a new park. […] Milwaukee might be equipped to host porcelain bathroom fixture conventions, but an All-Star Game? Forget it. The city was so eager to show the world its sophistication that it housed the international media contingent 15 miles away from downtown in roadside suburban hotels.

But enough about the controversies: let’s talk attendance, because it’s pretty damn good. Over the course of its first 16 seasons, attendance at Miller Park has dipped below two million only twice, in 2002 and 2003. Meanwhile, the Brewers drew more than three million fans to the park in 2008, 2009, and 2011. At the beginning of the 2016 season, the Brewers placed an impressive 13 out of 30 for best attendance in the MLB, with a home average of 31,389.

Let’s talk affordability. Again, at the beginning of the 2016 season, the average cost of a Milwaukee Brewers home game for two people came in at $80, making Miller Park the 13th most affordable ballpark in the MLB. A GOBankingRates study crunched the numbers:

Those numbers may inch skyward this year with the new “Local Brews” bar, which features Wisconsin-made brews clocking in at $10-$14 a cup. But Miller Park’s dedication to “local” is laudable, giving it a personal touch, and giving fans plenty of options beyond that stadium’s namesake. Oh, and you can totally tent out overnight in the damn thing.

Plus, Bob Uecker. And the Sausage Race. And “Roll Out The Barrel.” And Bernie. And tailgating. And more. The Brewers may be rebuilding, but, happily, the charms of Miller Park remain constant. Go Brewers? Of course, but just going to a game may be the biggest draw. 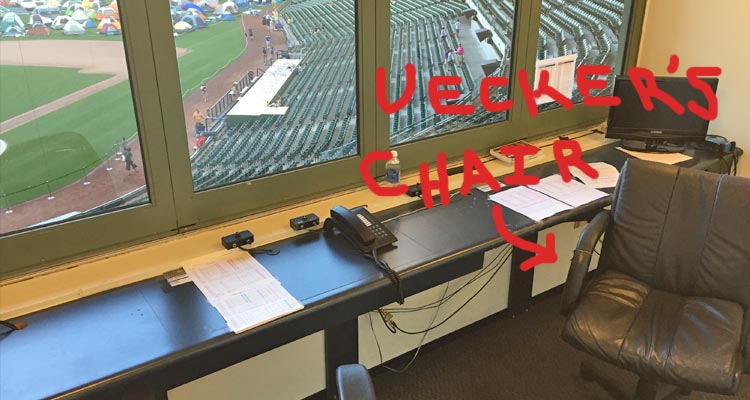