It would be a disservice to merely refer to WC Tank as a rapper without also making mention of the artsy emcee’s body of work that finds him providing visuals for nationally recognized rappers, making excellent and inventive music videos (and in the spirit of full disclosure, working with Milwaukee Record on a couple of video projects), and putting festival-qualifying renderings on film. Though his versatile skill set can’t be disputed, Tank’s varied areas of expertise rarely coincide. That is, until now.

Saturday, the rapper (and visual artist and videographer) will formally release Almost Forever, a five-song EP that is paired with a DVD of music videos for each song—all tucked into a zine bursting with lyric collages, illustrations, and poems. Before his wild release weekend (hint: camera gloves!), Milwaukee Record spoke to Tank about his new release, collaborating with Milo, his progress on his forthcoming Hellfyre Club feature-length documentary, and the importance of incorporating all elements of what he does into Almost Forever.

Milwaukee Record: What are some differences between this EP and your earlier work, and what’s the significance with the name Almost Forever?

Wes Tank: Just the fact that everything is almost forever. Forever is impossible, at least keeping something together forever—like a relationship or any entity, but it can last a long time. The album is about existing and my next record is about being invisible, so existing feels like it’s almost forever.

One of the differences between this release and my last two records is I produced all the beats on this, so it’s kind of hearkening back to my Stumblesome days. I produced them and brought them over to Seakn. He mixed them and we embellished it, and added bass lines by Barry Paul Clark (adoptahighway). My buddy Seth Warren Crow plays drums on some songs. Milo and Safari Al both do vocals on the record.

MR: Is there a name for the next one, and any idea when it will be out?

WT: Yeah, it’s called Vanishing Points, and hopefully [it will be out] before the end of the year. I’ve been working with Riley Lake, Joshua Breakfast, and Seakn. We’re all collaborating on beats.

MR: You mentioned Milo earlier. This EP is going to be put out on his clearing house. How did that all happen? Was it just the fact that you’ve worked together in the past?

WT: Milo is just a guy who has a zillion ideas. He has more ideas than he can put out in a short amount of time. We had been working together and he was saying he wanted to start putting out tapes by his friends. He’s really blown up over the past year, so I never wanted to put pressure on him, even though he said he wanted to do it. Then I was just slowly working on this EP and when I told him it was basically done and there were plans for him to rap on a song. Since it was short, he was like, ‘We can put a tape out of it with one side as the EP and the other side would have remixes by Busdriver, Odd Nosdam, Riley Lake, and some other people.” We did all that, but then him and [Safari] Al moved to L.A. Al really did a lot. He became sort of the project manager and did the collage work.

The three of us were having this brainstorm session over Skype and were like, “What if we really made a splash with this thing, and incorporate every aspect of what I do on a regular basis for disparate things? What if we applied it to this EP?” It’s short enough that we could do a video for every song. We could do a book or lyric collages and illustrations to get friends involved and other artists involved.

MR: Speaking of the multi-media aspect, other than the music, there’s a large video and—in the live shows—a visual element, and handmade individual discs with unique packaging. Why is it so important to incorporate all the elements of what you do in the presentation?

WT: My last two records I just did online for free. There’s this thing where you want to get your name out there and let people hear you, then hopefully something like what happened to The Weekend will happen. So that didn’t work, and I was thinking I should just really go in on the packaging, do a physical release, and really put time, effort, and care into it. I was really happy with how the songs came out, so I think it was really worth doing. I like the idea of the thing itself being a piece of art that’s something you can have, look at, and feel it—it has weight to it. I would hope this wouldn’t become a piece of shit in the back of somebody’s car.

MR: Is the Hellyre Club doc coming along well?


WT: Yep. I enlisted another editor to work in tandem with because I have so much shit going on. His name is Jonathan Olsen and he’s helping me out. The Hellfyre documentary is such a huge thing. It’s hard for just me and my laptop to take on 30 hours of footage and paring that down. We’ve been meeting every week and going over the footage. I definitely don’t want it to go on forever and be years before it’s done, so we’re pushing.

WC Tank will release Almost Forever Saturday, August 30 at Mad Planet. He’ll be joined by openers WebsterX, Riley Lake, Airo Kwil, and Nicholas J. The show begins at 9 p.m. and costs $8. Before the show, there will be an “Evening Of Almost Art Performances” at Imagaination Giants, followed by a boom box tour to Mad Planet. Friday, there will be filmed screenings and a potluck at Usable Space in Bay View. All info is listed below. 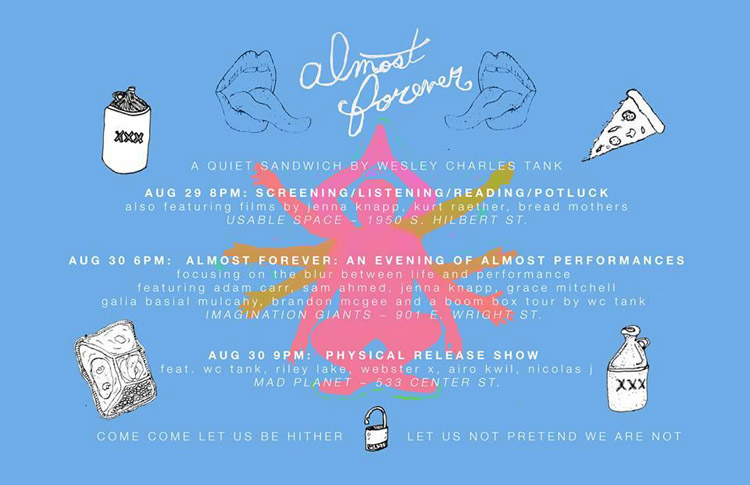