The Vanguard isn’t afraid to shake things up. On top of regularly changing up its menu in new and exciting ways, the owners of the Bay View bar and sausage emporium have shown no hesitation to occasionally break format during their first four years in business. Beyond once turning its patio into a pop-up record store, temporarily serving ribs and fried chicken, and kindly giving plucky upstart publications a sausage for a weekend, The Vanguard has been known to take things to the next level for around Halloween.

For one night in late October of 2015, the business changed its name to Golden Dragon and specialized in Chinese cuisine. The following year, Vanguard served up seafood as a single-night venture called “Hook Line & Sinker.” Last year, the business took the holiday theme to weirder, more obscure, and infinitely more awesome territory when it spent Halloween as a Seinfeld tribute restaurant known simply as “A Restaurant About Nothing.” So how will The Vanguard transform this year? You’re going to laugh!

The night of Wednesday, October 31, the sausage joint will temporarily turn into “The Punchline,” an ’80s-style comedy club.

“I think people get confused by our Halloween events,” Vanguard co-owner Chris Schulist says. “Our idea behind them is, if the people behind Vanguard were to open another place with a totally different concept, what would it be? Kind of like our dream bar and restaurant.”

Not only will the The Punchline offer oodles of laugh from a talented lineup of Milwaukee comedians, chef Patrick “Paddy” Joyce created some comedian-inspired burgers, and Ricky Ramirez has crafted some punch and punch bowl concoctions for the occasion. And there’s sure to be a surprise or two along the way. Schulist tells us patrons are encouraged to dress as their favorite comedians “or, honestly, just dress ’80s.”

Milwaukee might not have a true comedy club at the moment, but for one night, The Punchline will fill that void and fill Bay View’s bellies with burgers and punch in the process. We’ll see you there! 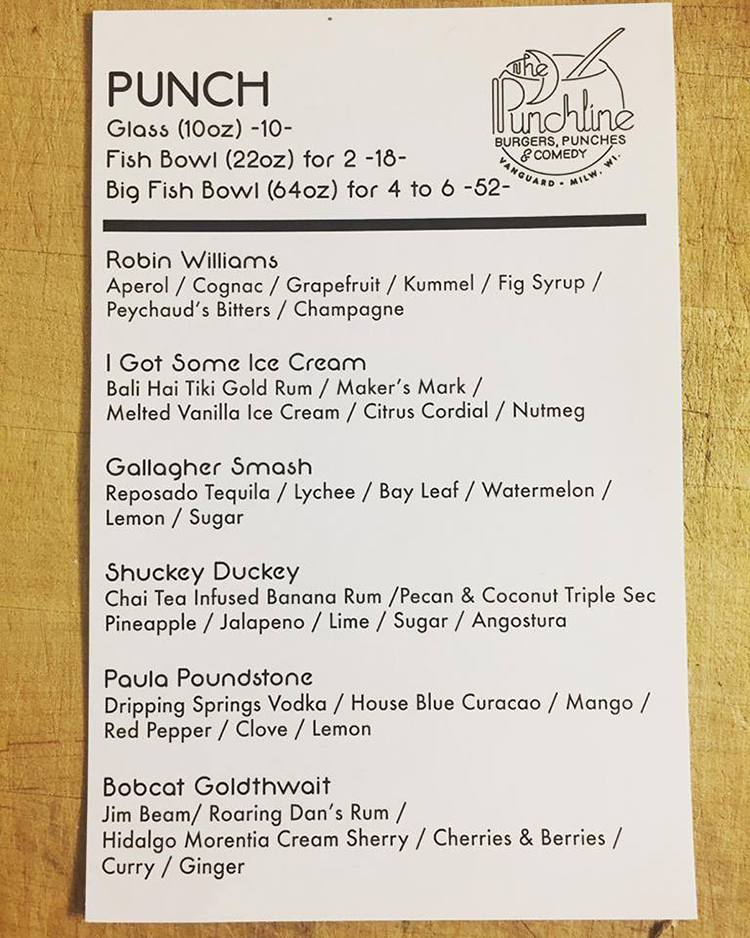