The Vanguard isn’t afraid to shake things up. Though the sausages the Bay View restaurant and bar serves up on a daily basis are deserving of the oodles of acclaim from local and national dining sources alike, ownership has shown no hesitation to occasionally break format during their first three years in business. On top of cycling new menu items in, once turning its patio into a pop-up record store, temporarily serving ribs and fried chicken, and kindly giving plucky upstart publications a sausage for a weekend, The Vanguard took things to the next level for a few hours in each of the last two Halloween weekends.

For one night in late October of 2015, the business changed its name to Golden Dragon and specialized in Chinese cuisine. Last year, Vanguard served up seafood as a single-night venture called “Hook Line & Sinker.” This time around, Vanguard is taking the holiday theme to weirder, more obscure, and infinity more awesome territory. On Tuesday, October 31, The Vanguard will temporarily close in order to spend Halloween as a Seinfeld tribute restaurant known simply as “A Restaurant About Nothing.”

After the restaurant Milwaukee knows and loves closes in the afternoon to allow redecorating to occur, it will reopen at 7 p.m. with a new name, a new concept, and food and cocktail menu that’s inspired by the series.

“We thought about going as the diner for Halloween, but we didn’t just want to be the diner,” Vanguard co-owner Chris Schulist tells Milwaukee Record. “We wanted to be a restaurant inspired by Seinfeld, so it will basically have all the little tiny inside jokes you’ll get if you’re a huge Seinfeld fan.”

Beyond stressing the menu won’t feature sausages, Schulist says food items and cocktails won’t be released until the night of the pop-up, though he says “we know how George likes his chicken spicy” and he hints A Restaurant About Nothing will offer Elaine’s favorite food. “The menu will be pretty small but funny,” Schulist says.

The restaurant will be decorated with a variety of Seinfeld inside jokes, and a specially curated soundtrack will add to the theme. A small run of t-shirts with the new restaurant’s name will be available well. Seinfeld-inspired costumes are strongly encouraged, and a gift certificate will be given to the patron determined to have the best costume.

“We’re really encouraging people to dress up,” Schulist says. “But it’s going to be easy to be Elaine or someone like that. I want someone to be background characters like Sue Ellen Mischke or Crazy Joe Davola, you know?”

In previous years, Vanguard had its celebration the Saturday before Halloween. However, it will take place the night of Halloween this year (a Tuesday) to let people celebrate as they wish over the weekend, then devote their October 31 to Seinfeld.

“This is just such a dumb idea,” Schulist says. “It feels ripe for a Tuesday.”

Yada yada yada… if you love Seinfeld, then make sure to giddy up to A Restaurant About Nothing this Halloween. 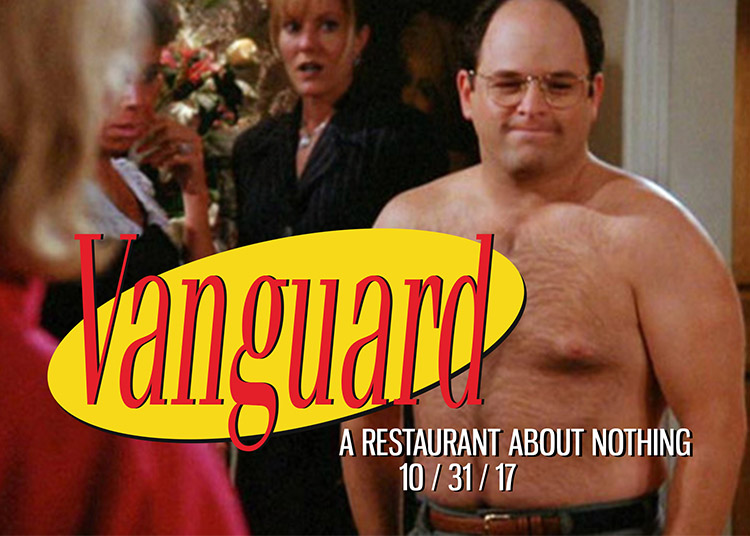