This is the second installment in a series of interviews with legendary cartoonists and publishers I first met in 1997. Back then I was a Brazilian journalist touring the U.S. with the not-so-subtle mission to meet my comic book heroes in person. I have since transformed into a Wisconsinite and the proud co-owner of Milwaukee’s newest bookstore, Lion’s Tooth, specializing in indie comics and small press goodness. We have a subscription available right now and will open our brick-and-mortar location next year.

Dame Darcy was the first cartoonist I interviewed during that visit to the U.S. in the ’90s. She was (and is) a goddess to me. I used to order her Meat Cake comic directly from Fantagraphics and each issue was an absolute treasure, so I was more than eager to meet her at her apartment in New York City. So eager that I got there too early with my photographer friend Carolina. Darcy was asleep and we had to wait almost an hour for her to get into her gorgeous Victorian get up.

These days it seems that everyone is a “renaissance” person, but few are as deserving of that title as Dame Darcy. Besides writing and drawing comics, she is a gifted sign painter, doll maker, and banjo player (she also plays the saw). Back in the ’90s she starred in her own public access show, Turn Of The Century, with skits, stop motion animation shorts, and special guests such as Courtney Love. This connection has been chronicled by Darcy in a comic strip and in this article. She is also a mermaid, a witch, and she can read your future. Sonic Youth’s Thurston Moore has raved about her divination abilities and she even used to do long distance palm reading if you sent her a Xerox of your hand.

In 1997 Darcy read my palm and told me the worst of my life was over, but I would be late to find true love and wouldn’t have kids—not what I wanted to hear at that time. She repeated these predictions this fall over watermelon strawberry salad and shrimp rolls. She also brought along her doll Isabelle, who added her own unique touch to our reunion.

Here’s a sample of the interview. Read the whole thing HERE. 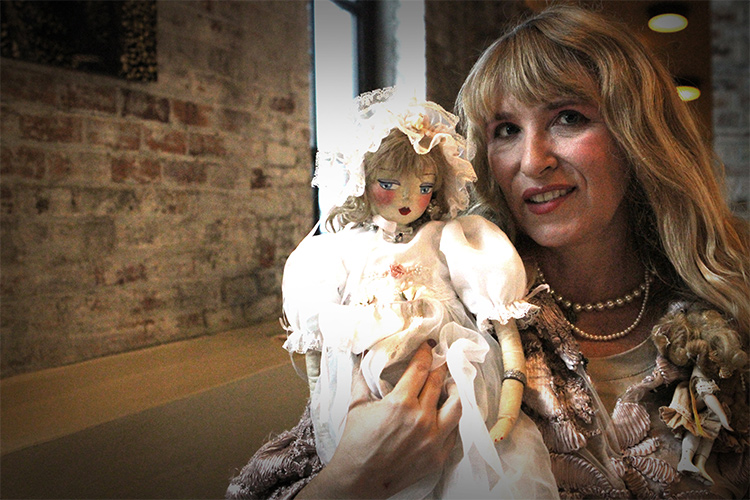 Darcy: Isabelle was begging to come out, so I flipped a coin. I flip a coin to make a lot of important decisions. The coin said yes, and so Isabelle came out tonight.

Isabelle: I wanted to, it’s time I get what I want!

Darcy: Isabelle, this is not your interview, you don’t talk.

Isabelle: I can talk if I want to.

Cris Siqueira: Feel free to add anything you want, Isabelle.

Isabelle: I can talk if I want to!

Darcy: She’s really bratty. She put on a really fancy dress for this occasion.

CS: Isabelle has been with you forever. Did her personality change over the years?

CS: Have you been able to make a living out of comic books or cartooning?

Darcy: Yes, but only because I started doing bigger graphic novels on major publishing companies, and getting bigger advances. I did Jane Eyre, Gasoline, Frightful Fairy Tales. All of those came out when I was in L.A. I was also selling my fine art in L.A. Because it’s easier to break into the fine art market in L.A. than in New York. New York is way harder, there’s a lot more people trying that.

CS: How did you get involved with comics?

Darcy: I started self-publishing zines, photocopy zines, during the whole zine trend in the early ’90s. I went on tour with Lisa Suckdog, she did her zine, I was in her zine, that kind of stuff. Then I got published by an independent company that wasn’t as big as Fantagraphics to start with. Back then, if you got published, you did tours and that was the only way that you’d be seen, there was no social media and all this craziness. But the old school ’90s way cuts through all of that social media crap, with real-life experiences, being able to draw with your hand, all that still has the edge it always did.

Darcy: She’s drunk already, that’s why she’s saying “Isagram.” Isabelle thinks she’s going to get so famous that she’s going to take over Instagram. Anyway, I was doing my comic book series [Meat Cake] in New York City, getting published in New York magazines, and doing animation. I had my cabaret night, Naughty Nautical Night, and I had my TV show, Turn Of The Century, with Lisa Hammer.

Darcy: My mom’s from L.A., I always went to L.A. as a kid, I had a boyfriend in L.A. when I was a teen, and I always knew that I was going to live in L.A. one day. Also because I always wanted to create a feature film of my comic book, or a TV series, or something. Then I got my first movie optioned, it was called Planet Blue, and they didn’t produce it, which is a thing that happens. Part of it because I wasn’t writing it and getting it produced, part of it because I just sold it as intellectual property. That happens a lot and I got it. But I still got money. Then Gasoline was published and it got optioned as well. Again, that movie didn’t get produced so by then I’m over it. I’m like, “I’m out. I’m going back to New York City.” I go back to New York, I meet one of my soul mates, I’ve met more than one. But then he turns into a big jerk and dumps me, breaks my heart. We were sharing the rent. Our rent was $3,000. I was in my late 30s at this point. Thirty-nine. First, I had to pay twice the amount of money on rent because he was gone. Second, the rent was going up even higher than $3,000. Third, they were going to end up selling the building or kicking us out at some point anyway because that’s what always happens in New York, so I had to start thinking of a place where I could buy property that’s cheap.

Darcy: Sorry, don’t fall off the chair! Jeez, okay, honey. Here. She hasn’t even been drinking that much. Anyway, what was I saying? I’m sorry. 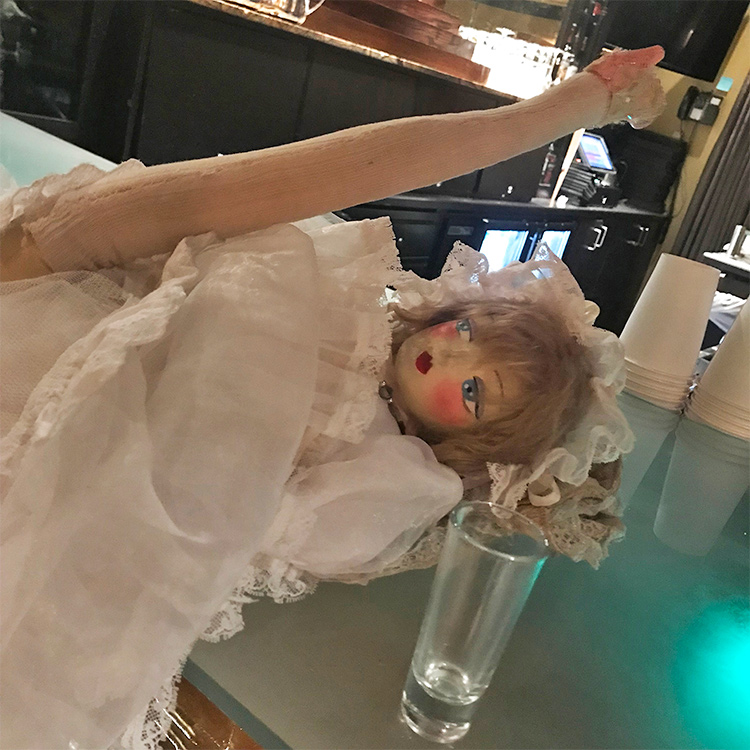 CS: When did you come to Savannah?

Darcy: I saw a place in my mind. I can remember this day so clearly. I was in my apartment in Manhattan, on Ludlow Street in Chinatown, and I was looking up the street toward the skyline. We had a really good view, actually, and I saw this vision. I was like, “Okay, it’s got antebellum architecture, yet it’s got tropical plants and palm trees. Is this Trinidad?”

CS: You had the vision before you knew where it was?

Darcy: Yes, and I was like, “Is this Uruguay? Is this Trinidad and Tobago? Is this Cuba? Is this somewhere in America?” I saw the vision and I was like, “Okay, if I find out where that is, I can buy property and I can control my own life.” Then I came to a friend’s wedding here and I discovered it was here. I was like, “It’s a two-hour flight from New York, I’ll totally go there.” I came and moved into a gay house called the Rainbow House.

Darcy: For gay men. I was like Smurfette there. I was scared of Southerners, for good reason, they are racist and it’s scary. They’re Trump supporters and it’s scary. I knew there would be scary rednecks here, so I hid in the gay community like it was my nunnery. I eventually moved out to my own place.

CS: She keeps looking at me.

Darcy: I know. She’s got those creepy side eyes.

Cris [to Isabelle]: Turn around a little for me, Isabelle.

Isabelle: I’d rather not. 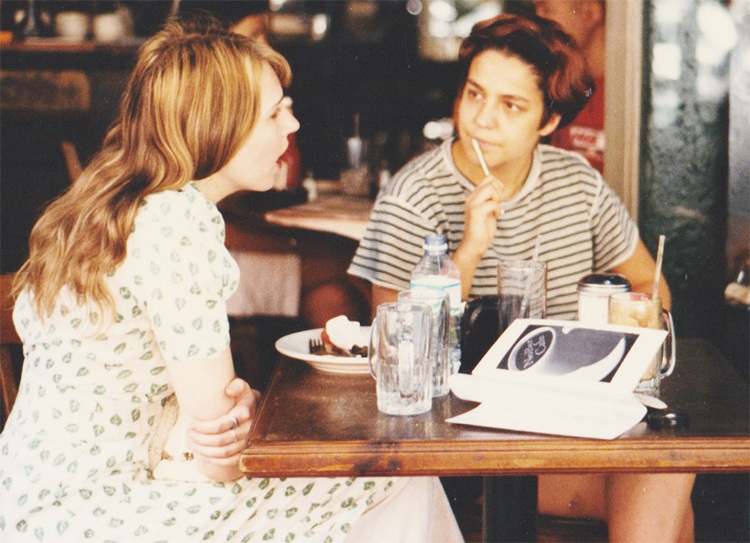