It’s been a while since the once-mighty, long-withering Shops of Grand Avenue closed up shops (heh). Now dubbed “The Avenue,” the downtown complex is currently being redeveloped. The east end has already been converted into apartments (things like T.J. Maxx and The Underground Collaborative remain), while the west end will have private offices for GRAEF on the upper floors, and a nifty food hall called 3rd St. Market Hall on the first.

But what about the exterior of The Avenue? And, specifically, what about the south-facing facade of the 2nd Street skywalk between Wisconsin Avenue and Michigan Street? Well, Milwaukee Downtown BID #21, the Downtown Placemaking Task Force, and The Avenue are looking for someone to create a mural for the space. Neat! 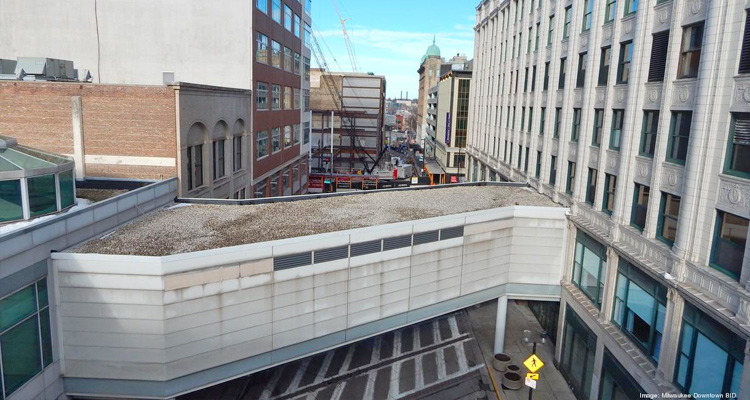 “This first-of-its-kind mural in downtown Milwaukee will strengthen pedestrian connectivity between existing parking structures and soon-to-open attractions, such as the Milwaukee Symphony Orchestra Center and 3rd Street Market Hall,” says a press release.

The approximate dimensions of the mural? A whopping 92 feet wide by 15 feet high. The mural’s budget? A cool $25,000. The mural’s projected installation? Spring 2020.

Interested artists have until February 14, 2020 to be considered. Click HERE for more information. Here’s hoping someone pitches a mural of the Leonard Bearstein Symphony Orchestra. A full press release is below.

MILWAUKEE, Wis. (Jan. 7, 2020) – Milwaukee Downtown, BID #21, in partnership with The Avenue, is seeking submissions from local artists and artist collectives for a new mural in Westown. The intended canvas is the south-facing façade of the 2nd Street skywalk, between Wisconsin Avenue and Michigan Street. This first-of-its-kind mural in downtown Milwaukee will strengthen pedestrian connectivity between existing parking structures and soon-to-open attractions, such as the Milwaukee Symphony Orchestra Center and 3rd Street Market Hall. The approximate dimensions of the mural space are 92 feet wide by 15 feet high.

The 2nd Street skywalk mural will complement the vision for 2nd Street, which calls for additional pedestrian amenities, including public art and seating, between Michigan Street and Postman Square. Artists interested in responding to the RFQ, which is available at www.milwaukeedowntown.com, will have until Friday, Feb. 14. All submissions should be emailed to Gabe Yeager, Downtown Environment Specialist for Milwaukee Downtown, BID #21, at [email protected] Submissions will be reviewed by the Downtown Placemaking Task Force and the finalist will be awarded $25,000 to execute the project. The projected completion date for the skywalk mural is Spring 2020.

Once complete, the 2nd Street skywalk mural will be part of the growing portfolio of public realm improvement projects led by Milwaukee Downtown, BID #21. To date, these projects include enhancements at Postman Square in 2019, and murals like “Heart & Sol” by Mauricio Ramirez (2019), “Westown in Bloom” by Emma Daisy Gertel (2019), “Migration” by Katie Batten and Janson Rapisarda (2018) and over a dozen utility box murals throughout downtown by Mauricio Ramirez (2017 – 2019). Since 2017, Milwaukee Downtown, BID #21 has contributed and raised $118,500 for the implementation of large-scale mural projects, with more than half of that investment coming from sources outside of the organization.