What is worth fighting for? Certain ideals and beliefs? The preservation of a way of life? When is the right time to fight? Who should do the fighting? What is owed to those who risk or give up their lives for their country? These questions are always worth considering. These are questions I asked myself as a recently politically awakened (thanks, punk rock!) and anti-war teenager, when the United States invaded Iraq. These are questions I ask myself today, as a still sometimes-but-not-always pacifist who I’d like to think has a deeper understanding of history, has a more nuanced worldview, and dare I say, is more proudly patriotic than I was at 17 (queue up “I Was A Teenage Anarchist” by Against Me!). These are questions that also came to mind when I had a fish fry in the upper hall of Oak Creek American Legion Post 434 last Friday (9327 S. Shepard Ave., 414-762-9660). 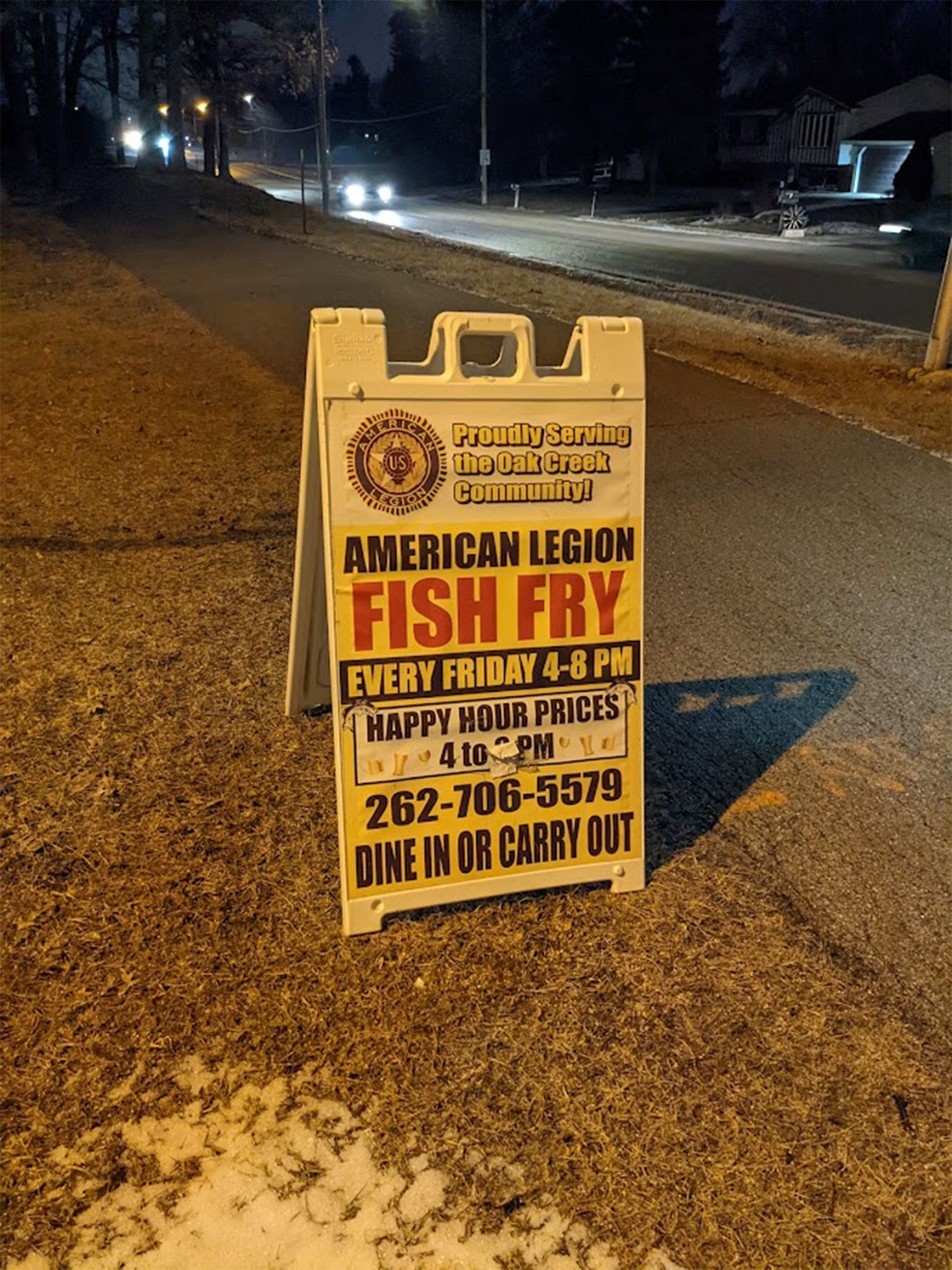 Prepared by American Legion Auxiliary Unit 434, the Legion’s fish fry is available on Fridays from September through April, from 4-8 p.m. As of this fish fry season, the Legion is back to their old, “original” recipe. Upon arrival I was told I could take any seat in the hall. About 15 tables were spread throughout it, with most being circular with six chairs each, and I took a seat at one of them towards the back. A server was with me shortly, and provided me with a menu. The front of the menu listed a “Fish Fry Phone #.” I later found it was the same number as the one for the Legion Hall, not a special fish fry hotline. 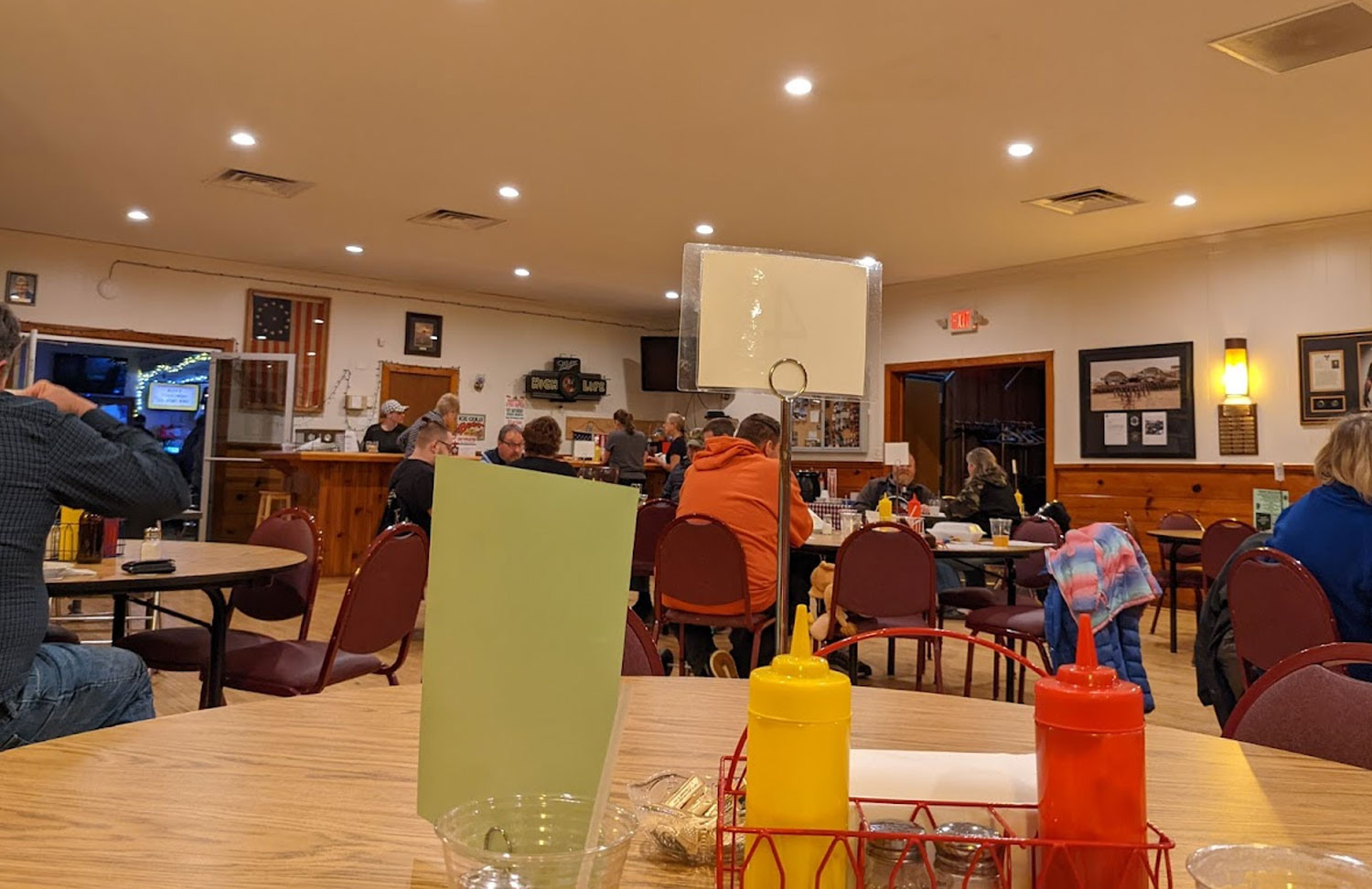 I ordered a Brandy Old Fashioned Sweet, a cup of chowder, and the three-piece fried cod with french fries. As the drink and chowder were being brought to me, I had the unsettling feeling that I had accidentally ordered the two-piece instead of the three-piece. “I ordered the three-piece, right?” I asked. “Do you want to make it a four piece?” was the response I was given—one of the best possible responses. So, that’s how I inadvertently ordered the “large” fish fry, an item that doesn’t even exist and was not listed on the menu.

The Old Fashioned, served up in a plastic pint glass, was bursting with the sweetness of cherries. Garnish free, it had stemmed cherries smashed at its bottom. A soup kettle in the corner of the hall held the chowder that came to me by cup. There was a symmetry to it: clam, potatoes, celery, and carrot were present in comparable numbers, and it was neither thin nor creamy. The peppery bite was the one deviation from its otherwise symmetrical presence. 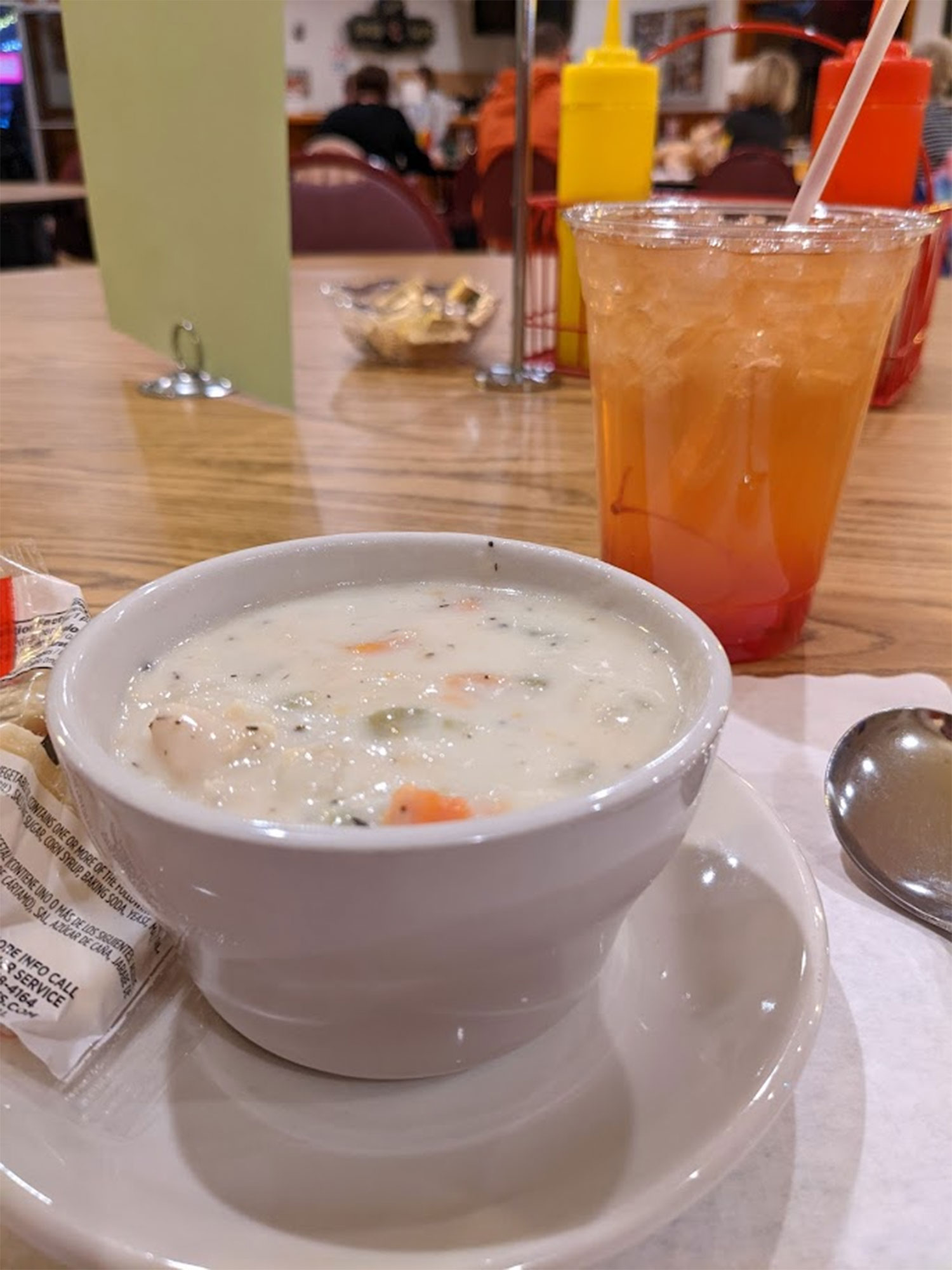 It didn’t take long for the fish fry to arrive. Two half slices of rye bread were thick, soft, and fresh with the flavor dial turned up. White and green shades of cabbage were dotted with orange carrot in the juicy, peppery, flavorful coleslaw. The skinny, skin-off fries were light on salt, not overly crisp, but still firm.

A seductive lip-licking saltiness pervaded the cod’s coating. Not greasy, and neither thick nor thin, it appeared to be a batter with the character of a breading. No matter what it was, it was very on point. The fish beneath it wasn’t far beneath it in class either, being thick, meaty, and uniform. The tartar was tangy and sweet and met the cod perfectly.

With such appetizing fish, I should have asked if I could have turned that large fish fry into an extra-large one. But there was something left on my plate: a little treat in a baking cup. I hadn’t thought much of it at first, assuming it to be a chintzy add-on. But it was so much more. It was a miniature cream puff—still chilled at its center, I might add. 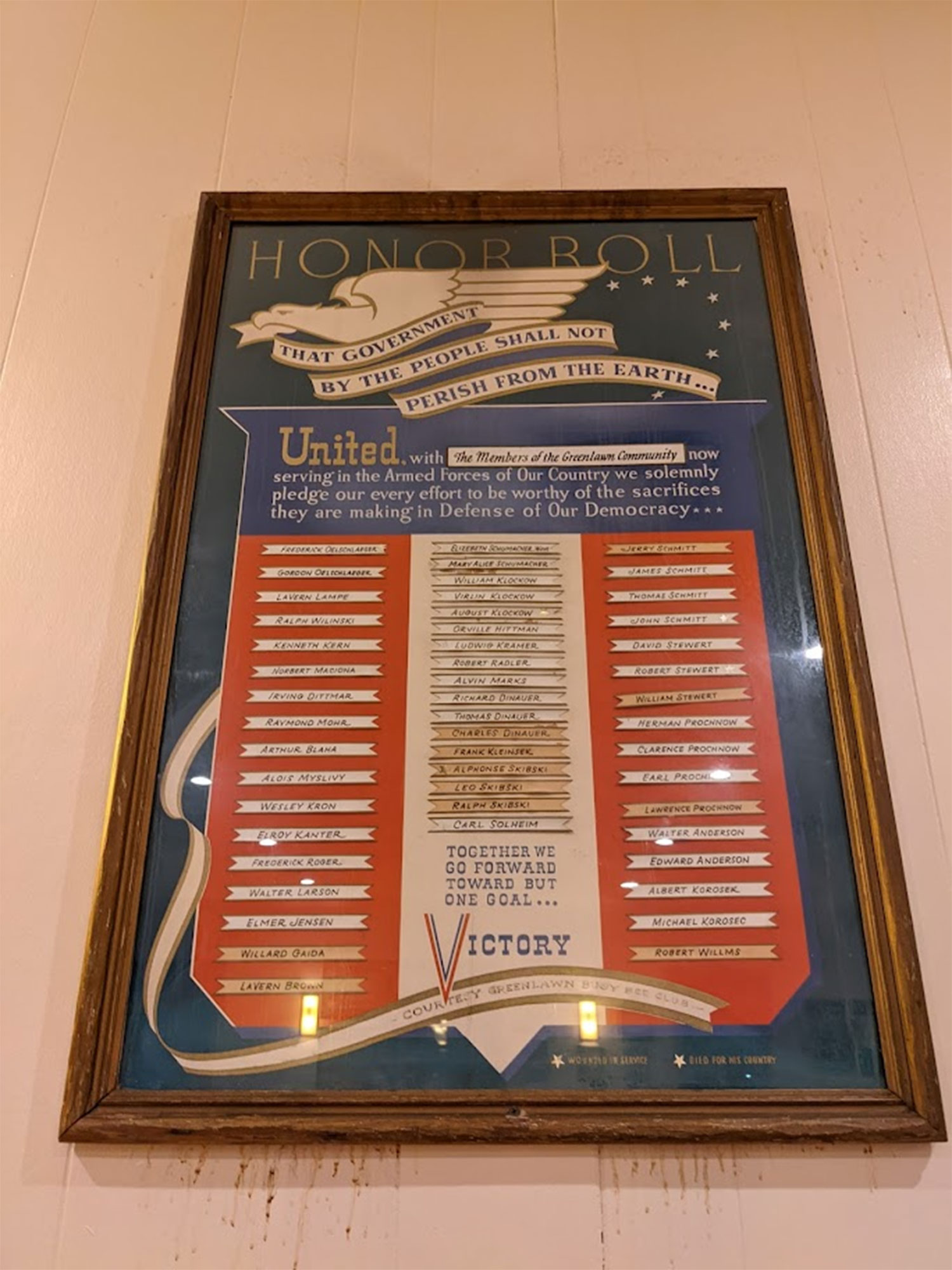 Sated from another week of fried fish, I looked around, taking in photographs of soldiers who fought for our country, dedications to their service, flags, guns, and some of the other usual accouterments associated with Legion Halls. I thought of my maternal grandfather, who would have turned 100 the previous Friday, who had landed on Omaha Beach four months after D-Day with the 252nd Field Artillery Battalion, and who then marched through France and Belgium, into Germany, and towards Berlin in early 1945.

I thought of the man who I had seen walk in the room with a hat that said Vietnam Veteran. I saw and reflected on the “Honor Roll” sign behind me, which had the words of Lincoln, whose birth anniversary was the following day. The words were from his Gettysburg Address: “that government…by the people…shall not perish from the earth.” I thought of Eastern Europe on the brink of war, and asked myself, “What if Vladimir Putin was trying to take away your Friday fish fry?” I reflected on the types of questions I posed at the beginning of this article.

In that hall, having just eaten a fish fry, this is the closest answer I could find: If there is anything worth fighting for, it is for this moment here. It is worth it to fight to preserve a country where people can come together for a fish fry in a cozy and friendly space on a Friday night—for the Friday fish fry is quite reflective of all we hold dear. It is worth it to preserve a country where the people who come together for these fish frys may have diverging political viewpoints, but have love and hope in their hearts for that country. Despite its faults and shortcomings, now and throughout its history, the United States is a beautiful country, on account of its democratic ideals—and the never-ceasing striving towards those ideals. These ideals, and the fish frys, just might be worth fighting for. 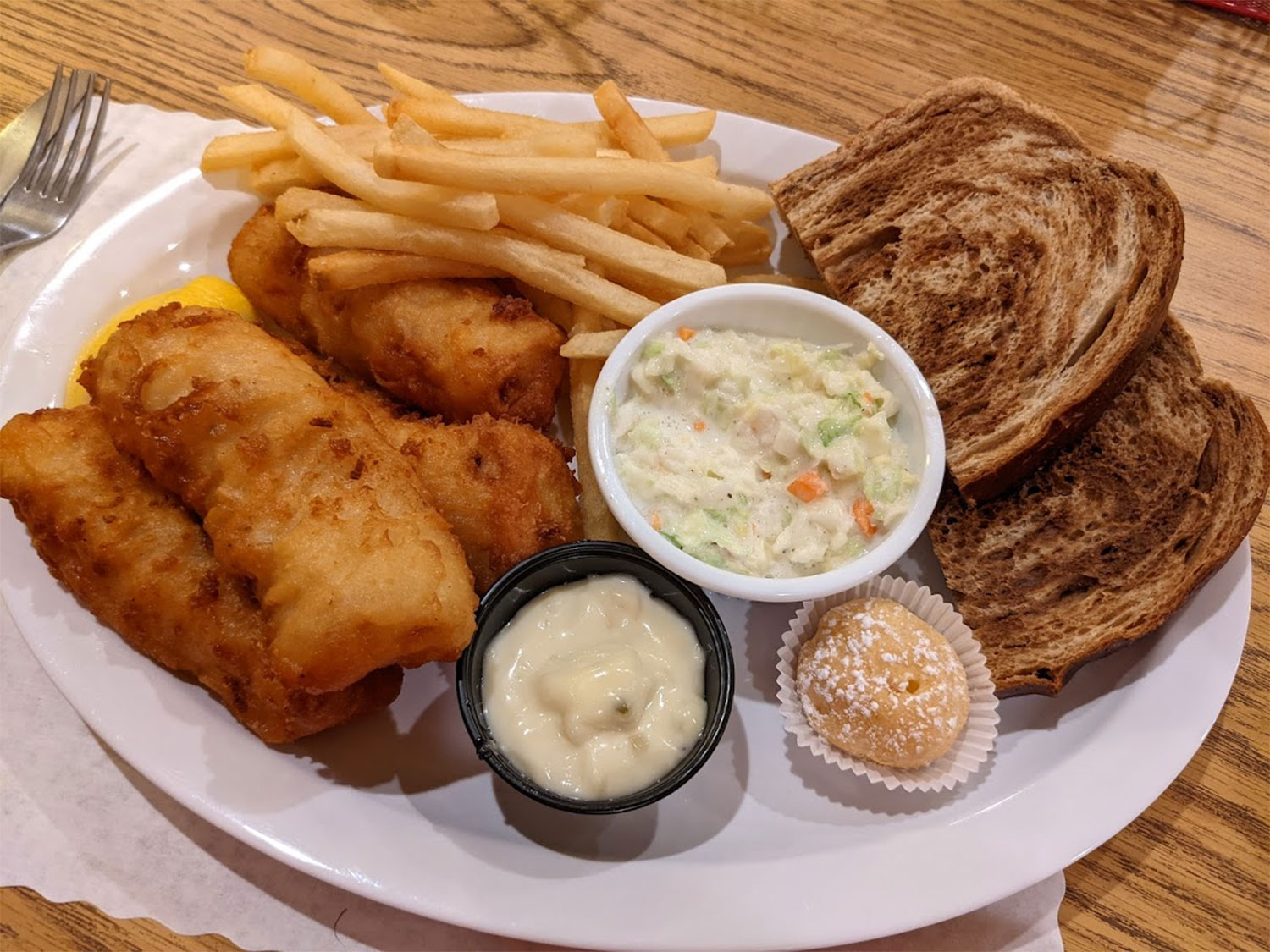