Even though the Polar Plunge is a Milwaukee tradition spanning almost 100 years, I’ll be honest: there’s pretty much nothing that sounds appealing about it. Getting up bright and early on New Year’s Day to…swim…in just-above-freezing, E. coli-ridden Lake Michigan water? Um, extremely hard pass. Even though I did partake in the plunge many moons ago when I was a zealous eight-year-old at my dad’s side, my lust for life (read: winter) has disappeared in the 13 years since.

Given recent weather conditions, the Polar Plunge seemed especially crude this year. Citing impending safety concerns, both Chicago and Kenosha cancelled their own Polar Plunges shortly before the event. Days prior to the delirious dive, local news outlets warned Milwaukeeans about the dangerously low wind chills that plungers would face on New Year’s Day. The air temperature was projected to be a near-record low, meaning the 2018 Polar Plunge would be the coldest Milwaukee has seen in more than 40 years.

After reading several “The Polar Plunge (Don’t Do It)” articles, I was seriously intrigued. I figured there was no way too many people would risk their safety and sanity to take part in an inherently unpleasant tradition, especially considering last year’s temperature on New Year’s Day was a comfortable 41 degrees. I wanted to see for myself what kind of insane people willingly participate in this unique kind of torture. 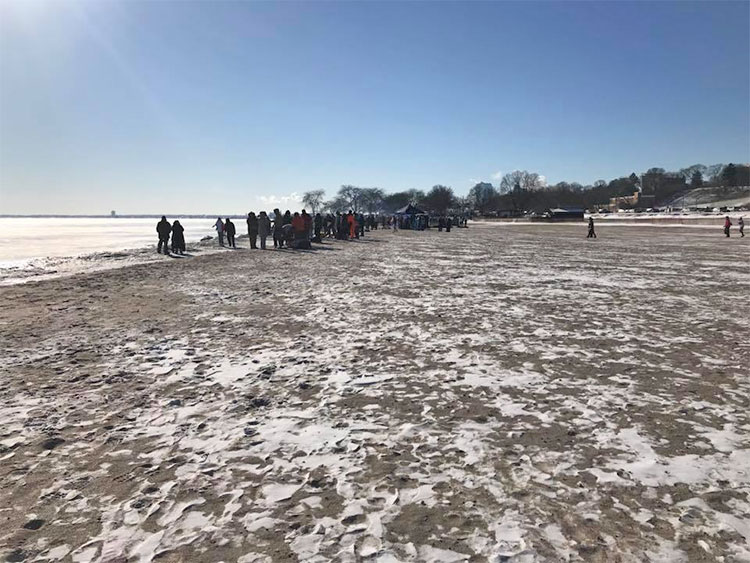 As I drove down Lake Drive, I was first surprised at how few parking spaces there were. Huh, people were actually doing this, even in subzero temperatures! When I made it past the plunge hub area, there was a crowd of easily three or four hundred people ready to strip and run into that ice-cold water. Holy shit, this many people were actually, seriously, really doing this?

I finally found a parking spot, and began trekking down to the plunge at 11:50 a.m. The frozen sand and snow terrain felt how I imagine walking on the moon feels: cold, grainy and squishy. And man, it was really fucking cold. I fancy myself as a cold-weather layering expert, and even though my arms were nice and toasty, I could barely move my face. I was beginning to feel secondhand anxiety for the people brave enough to take off their clothes and submerge their almost-naked bodies in 34-degree water. 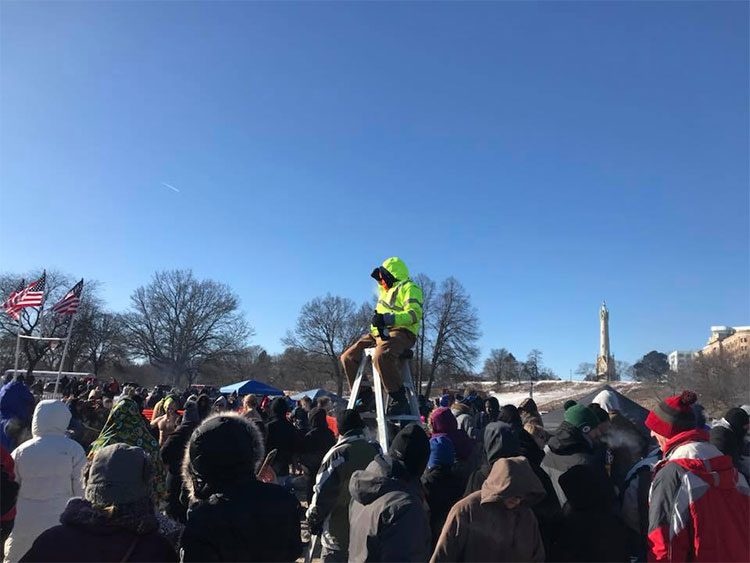 I soon realized most of the huge crowd was there to watch the madness, just like I was. Kids in full-body snow suits lined up on the ice caps to laugh at the crazy adults who ran in, screamed “WOOOO!” and ran back out. The lakeshore was covered in ice, and bystanders were slipping left and right. I also noticed there were a ton of dogs, but seemingly only the winter-friendly breeds like huskies and malamutes were present. It was admittedly adorable to see these gentle giants in what felt like their natural habitat.

The bullhorn blew four minutes early at 11:56, and people began charging into the ice-cold lake. Many plungers ripped the metaphorical Band-Aid and ran in immediately; but understandably, there were a lot of hesitant stragglers. I watched one man in swim trunks approach the shore, stick his feet in, and yell, “I’m not doing this! I DID IT LAST YEAR!” He retreated immediately. 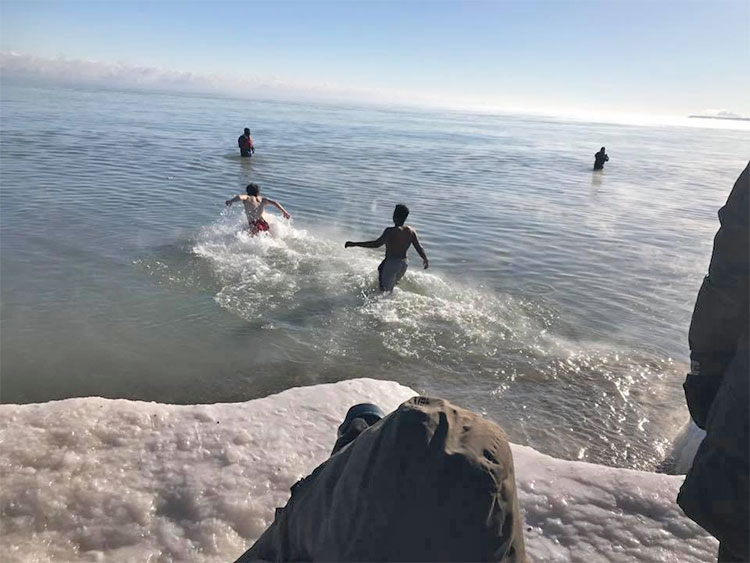 The Polar Plunge is a strangely unifying experience. Even though most swimmers were college-aged or in their twenties, quite a few older people and children were jumping in alongside their half-drunk peers. One middle-aged woman came out of the water wearing a hot pink tank top reading “Polar Bears ’91.” I would have never thought something as uncomfortable as wintertime swimming would bring people of all ages together for a round of good, clean, wholesome fun, but a guy dressed as Chewbacca holding a can of Bud Light proved me wrong once again.

As I made my way down the beach, I walked past four people dressed head to toe in Chicago Bears attire. (I must give them major props if they drove here from Chicago after their own city’s Polar Plunge was cancelled last minute. Shine on, you fucking crazy diamonds.) One woman in the group sang, in a totally made-up tune, “I’ve never wanted to do anything less in my entire life!” The gang ran in and immediately ran out, wasting no time splashing around and taking photos while in the water. This was the trend with almost everyone I watched, and I was relieved people were at least sane enough to not hang out in the lake for too long. 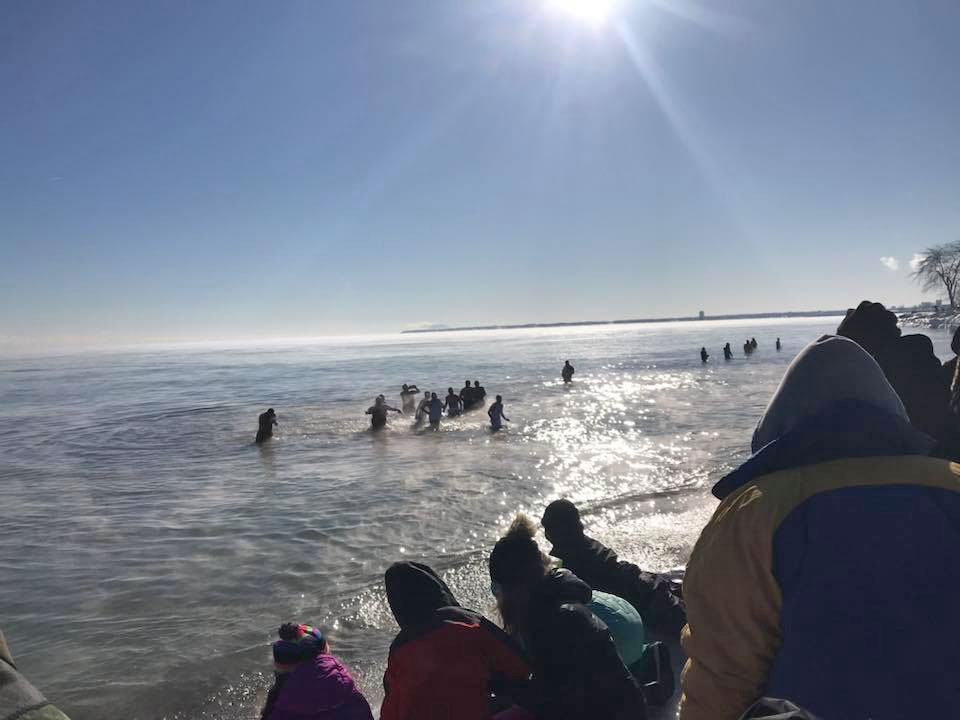 The most experienced plungers knew to dress very warm before diving in, and the mixture of body heat and freezing cold water transformed the little section of Lake Michigan into a huge pot of human soup. When plungers came out, their bare skin emitted steam as they made their way back to their clothes. The “steamy bodies” phenomenon was probably the weirdest, coolest thing about the Polar Plunge.

Bottles of Makers Mark were nestled in the frozen sand, and people chugged cans of Four Loko before and after running in. It wasn’t unlike being at Bradford Beach on a Saturday during summer months—trashy, but in a fun way! Die-hard plungers had tents and bonfires to keep warm, but the camping accessories only enhanced the summertime vibe. 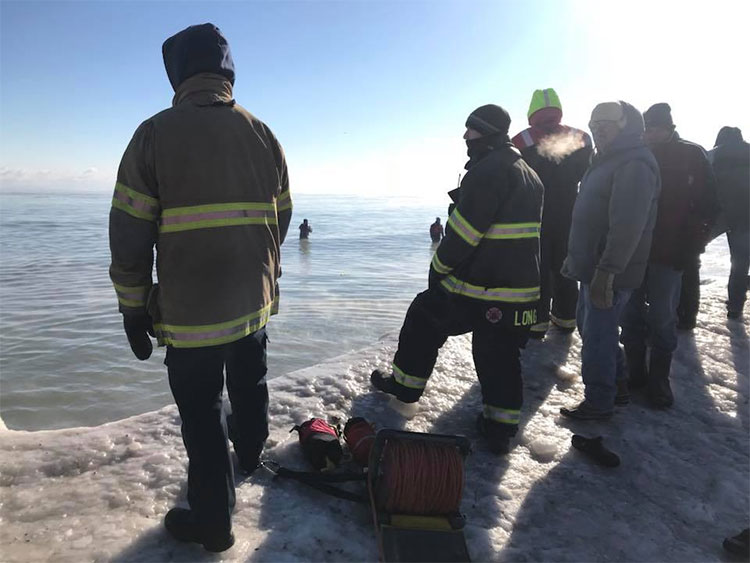 Even though it was unbearably cold, Lake Michigan looked especially beautiful in the subzero weather. Maybe I was looking for a distraction from my cold-induced, involuntary tears, but something about the midday blue sky, fluffy grey clouds, and sparkly water created a beautiful contrast against the onshore havoc. (I never, ever thought I’d use the words “beautiful” and “Bradford Beach” in the same two written paragraphs.)

After witnessing the Polar Plunge up close this year, I would probably consider doing it for the second time next year. Almost everyone who participated looked like they were having a blast, so it can’t be that bad, right? I’ll try not to think about the scene in Titanic where Jack tells Rose, “Water that cold, like right down there, it hits you like a thousand knives stabbing you all over your body.” Fingers crossed it will be 41 degrees again in 2019!