In the fairly short existence of Milwaukee Record, I’ve made a point to chronicle foolish adventures that have damaged my spirit, tested my eating endurance, and depleted both my physical and emotional well-being. I have no regrets (except maybe that George Webb one), but with the arrival of a new year also comes new perspective and a new opportunity to forge a different path. Over the course of 2018, I’m going to seek inner peace, personal growth, and all-around healthy choices and document my experiences with a series of columns under the ’18 And Life To Go umbrella. Will it work? Probably not, but I’ll try anyway.

I’ve always been intrigued by acupuncture. The idea of deriving comfort from being punctured seems a little counter-intuitive, but as one of the most popular holistic treatment methods and one that has existed for thousands of years, I figured it was worth exploring. Also, Milwaukee Community Acupuncture‘s “Try It Tuesday” promotion for free acupuncture every Tuesday in January added even more incentive to try this out soon. I booked an appointment online and printed out a questionnaire form the Bay View business requires new patients fill out prior to treatment.

The form asks for standard information like name, address, contact information, but also asks for information about sleep and digestive tendencies, medical history, and “symptoms” experienced within the last year (things like depression, dizziness, fatigue, headaches, weight loss/gain, and excessive worry). There’s also a litany of physical ailments related to health of joints, respiration, skin, urine, reproduction, intestines, and heart with space for patients to mark if those symptoms apply to them. While there’s a great deal of interest in medical information, the document makes sure to stress that “MCA does not provide primary care medicine. Acupuncture is a wonderful complement to Western medicine, but it is not a substitute for it.”

The form also tells patients to eat something within two hours of treatment, asks them to avoid brushing their teeth and tongue the day of their appointment, and asks patients to wear loose-fitting pants that can be pulled up past the knee.

I filled in the necessary details and checked the appropriate boxes, put on some sweatpants, somehow refrained from brushing my teeth, had a small meal, then brought the completed form to Milwaukee Community Acupuncture’s second-floor office for my Tuesday evening appointment. 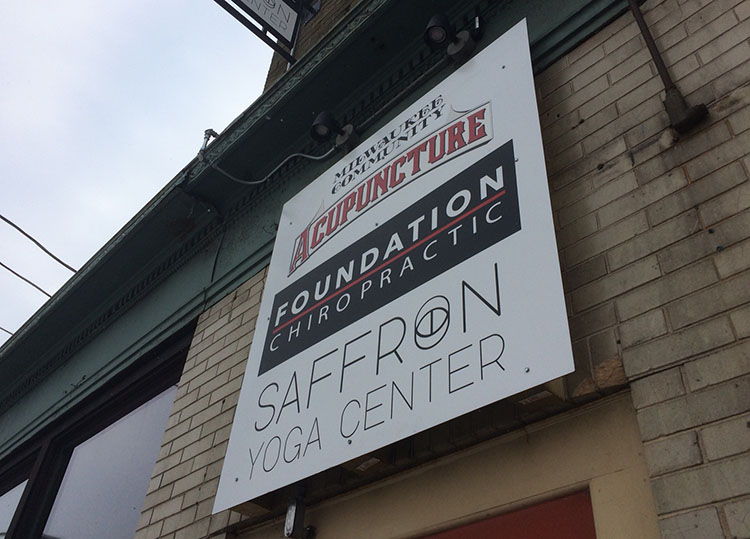 The business is located above Cafe Centraal in the bustling heart of Bay View, which seemed like a strange place for an establishment centered on comfort, serenity, and the harnessing of qi (or “chi”) from the outside. Once inside though, the warm sounds of ambient music lured me up the steps and into the waiting room, which was decorated with paper cranes and smelled faintly of incense. Within minutes, I was introduced to my acupuncturist, Olive, who spoke in a soothing, hushed tone—that would last the entirety of the appointment—and led me into the room where I was to be treated. 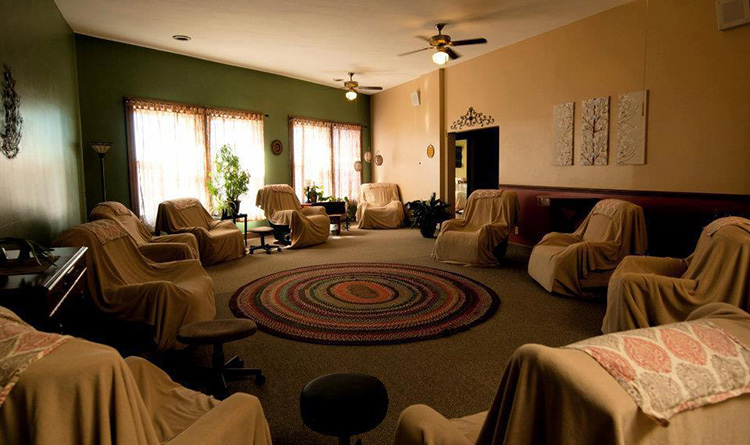 The room was surrounded with a circle of covered recliners that had baskets beside them. I was asked to remove my socks and shoes, then place my phone, wallet, keys, shoes, and all other personal belongings into the basket, and to take a seat. Olive sat down on a stool beside the chair, clipboard and my questionnaire in hand, and simply asked me in that same comforting quasi-whispered tone, “What’s going on?”

Maybe the question was just the same recycled and disingenuous colloquialism we all encounter in the outside world countless times each day (“How are you?”, “What’s new?”), but the combination of the relaxing setting, the unfamiliarity of the situation I’ve put myself, and what seemed to be an earnest interest from Olive had me opening up about any conceivable thing I listed on the form she’d scanned minutes earlier. I almost reflexively spouted details about my chronic hand and wrist pain, a recent rash of migraines isolated behind my left eye, my inability to stop thinking or worrying and just be “in” a moment, heartburn, subtle but consistent feelings of depression, a kink in my neck, and more. I wasn’t sure what she wanted or needed to know, so I told her everything that might be useful to better facilitate my impending impaling.

The information I shared—and perhaps overshared—helped her decide the points for, well, the points to go. Calmly, she told me she’d be putting needles in my arms, hands, legs, feet, ears, and forehead. I was shown the needles, which were astoundingly thin and topped with weights to help them travel down a tube to be embedded just beneath my skin. In total, 20 needles were used: four in each arm and hand, four in each leg and foot, one in the upper cartilage of both ears, one in the center of my forehead, and one right between my eyebrows. The needles were far too thin and poked too shallow into my body to hurt. I couldn’t even feel some of them. One in my right forearm “nicked a nerve” (Olive’s words) and became slightly uncomfortable when I moved my hand. Another, this one in my left hand, wound up falling out after a few minutes. That was about the worst of it. 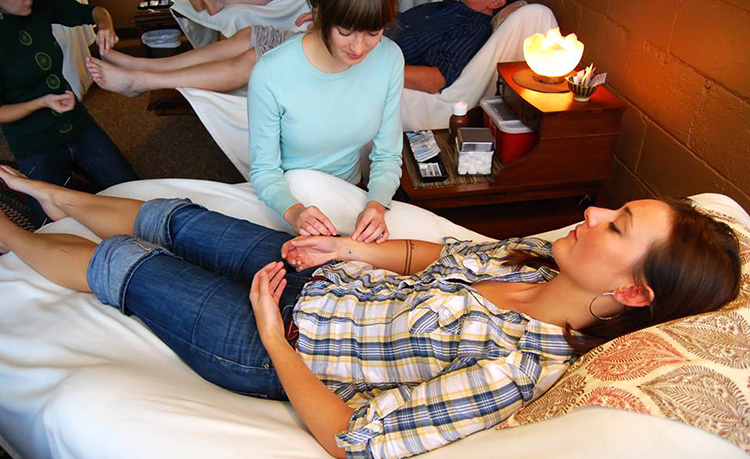 Olive with a patient.

After each needle was placed, Olive told me she would be back to check on me in about 45 minutes. For the first time in this experience, I felt worried. What was I—now a literal pincushion placed helplessly atop a recliner—supposed to do alone and without a phone or shoes for 45 minutes? I asked if it was okay to leave earlier if I wanted, and Olive said I could signal for her to come remove the needles and release me at any point, but said appointments typically last 45-60 minutes. “Good!” I thought to myself. “As long as I’m not stuck here staring around the room for 45 minutes, I’ll be fine.”

At first, that’s exactly what I did. I looked across the sea of recliners and saw an elderly woman in what seemed to be a deep, deep sleep. I wondered where they got all these chairs and how nice they were underneath the white coverings. I looked at the needles moving as I balled my fist or crunched my toes. I took in the ambient music and wondered how it was possible not to hear the buses and other street sounds from one of Milwaukee’s busiest intersections below. I wondered how my body’s energy would ever know to reroute itself to the 20…now 19 points in my body. All that lasted what seemed to be two minutes.

The next thing I knew, Olive’s trademark calm and soothing voice was telling me 45 minutes had passed and that I could stay longer if I wanted. I was stunned to see the sleeping woman was gone and different people were now in recliners nearby. How did 45 minutes pass? I had no idea whether I had slept or if I was lulled into some type of temporary trance. Maybe the needles worked. Perhaps they were merely placebos to, instead, force me to set down my phone, prop my feet up, and make my only task at hand to sit still and shut my goddamn brain off for the first time in…maybe forever.

I was still struggling to get my mind around what had happened, but I told Olive I was ready to go. The needles were removed and discarded, then I was handed a card recommending one or two sessions a week for the duration of six treatments. As I mentioned, Tuesdays in January are free, and other sessions are priced on a sliding scale between $15 and $45 depending on what someone can afford. I’d say $15 is more than a fair fee to feel that relaxed. After taking my time to put my shoes and jacket on, I shuffled down the stairs and into the cold, stressful world outside the reach of those ambient tones above Cafe Centraal. I felt discombobulated, like I was in some sort of simulation for a while. I felt like I had just woken up from a good night’s sleep or like I was tipsy. The short drive home was surprisingly difficult.

Of course, within a couple hours, that sensation faded and I was back in the rat race. By the next afternoon, my hand and wrists hurt again and the same feelings I’d revealed to Olive resurfaced in full force. I can say with confidence that I won’t be returning once or twice a week (maybe not even once or twice a year), but I will be back eventually. It’s comforting to know that I or anyone else with $15 and 45 minutes to spare can visit Milwaukee Community Acupuncture (or any of the other local acupuncturists) to plug back into the simulation as needed. As far as situations that require you to be punctured 20 times, there are far worse ways to go than acupuncture.